Another class-T bargain from 41 Hz 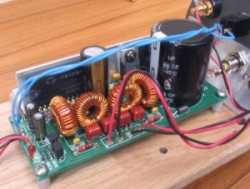 No sooner had I written my class-T amp review than 41Hz released some new kits. One of these was based on the 2020 chip that sounded so good in the Charlize and Autocostruire amps. And it used mainly non SMD components! So I emailed 41Hz and Jan very kindly supplied one for me to review.

The kit came looking much the same as the AMP-3 kit, ie everything was neatly packaged into small polythene envelopes such that the quantity of a particular component in an envelope would identify it on the components list. This makes it fairly easy to identify the components, some of which look very similar. 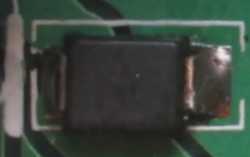 I am pleased to report that building the AMP-6 was a lot easier for me than the AMP-3. The only SMD components are relatively large diodes that were comparatively easily to solder in position. Unfortunately, the diodes were not clearly marked to show which end was the cathode. I thought that I had determined the polarity correctly by measuring the diodes on my meter but somehow I got it wrong even then! But apart from that mistake, the kit went together in a couple of hours without any real problems. If you tried the AMP-3 and had a nightmare with the 2024 chip, you will be pleased to hear that soldering in the 2020 version was much easier. If you have soldered a chip amp together then you should find that soldering the 2020 is not too difficult!

Along with a couple of other AMP-6 builders, I thought that the instructions could do with a bit of tweaking. Personally, I prefer to solder on all the smallest components first and work my way up to soldering in the largest ones last.

The AMP-6 is slightly different to the other amplifiers looked at in my class-T group review, in that it has an on-board PSU, that's complete except for the transformer. The on-board rectifier and regulator, together with the 2020 chip, all require some sort of heatsink. In practise, I find that a simple piece of aluminium angle 25 mm square and the length of the PCB is sufficient. But please note that I was only dropping a few volts across the regulator. If you are dropping more, then you may require a larger heatsink!

Having completed the kit and connected up the transformer, I started by measuring the voltage on the output of the regulator. It only measured a fraction of a volt and I realised that I had made a mistake somewhere. In fairness, Jan recommends getting the PSU section working before soldering in the chip but I had somehow missed that in my enthusiasm to get the project completed. After much checking I still could not find the fault so once again, Leo Kirkbride came to my rescue and it was he who found the problem with those diodes - I had soldered them in the wrong way.

If you build the AMP-6 and cannot see the cathode marking on the diodes, note that they are positioned on the PCB such that when the writing on them is the correct way up, the white line on the PCB should be to the left of the diode.

Having rectified the problem, Leo powered up the AMP-6 and found that it worked, albeit with a rather high 140 mV DC offset on one channel and 85 mV on the other. As somebody else had run their AMP-6 with an even higher DC offset, I decided to try the review sample in my test system.

The AMP-6 had already been run with a test load for several days and this was apparent as soon as I listened to it. Straight away, I recognised the sonic signature of the 2020 chip and yet the AMP-6 sounded distinctly different to the Charlize or Autocostruire amps. Once again, I couldn't really say better or worse. I didn't have a pair of polypropylene input capacitors to try with it, so it was still using the stock electrolytic types that came with the kit. Allowing for that, the AMP-6 sounds very good. Instead of making comparisons with the other 2020 amps, it may be more interesting to compare the AMP-6 with the AMP-3, even though they use different chips. I found the AMP-6 much smoother than the AMP-3 and not quite so clinical (although still very detailed). Where I had found the AMP-3 very slightly fatiguing to listen to after a while, there was no such problem with the AMP-6. Detail was excellent and the sound stage wide and deep. In short, a very good sounding amplifier, and, with better DC blocking capacitors, something to rival the other 2020 based amplifiers!

Summing up, I would recommend the AMP-6 to those who prefer to make their class-T amplifier from a kit. If you are reasonably skilled with a soldering iron, the kit should not present you with any major obstacles. The saving over the two ready-built 2020 based amplifiers is significant, particularly if you want to multi-amp active speakers or a Home-Theatre system. Add some good quality input capacitors (and some Welwyn RC55 feedback resistors) and I really don't think that you will be disappointed with the AMP-6. So full marks to 41 Hz for listening to their customers and catering for those of us who prefer the sound of the 2020 Tripath chip, and can't cope with those tiny SMD components.