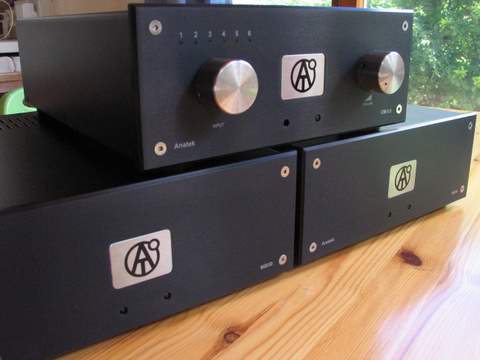 My first ever review for TNT, now almost 2 years ago, was of the Anatek A50 integrated amplifier. I liked it so much that I had to write about it, which made me a reviewer. You can imagine that I was very interested in reviewing some of their more upmarket stuff too, which led to this review.

Anatek Acoustics (previously Anatek Audio, by the way) is a young English audio company, based in Worthing, South England. The A50 was their first product, and was very positively reviewed, not only by me. The amp is based on a patented circuit that combines Class A, non switching behaviour with high efficiency, making it run as cool as a 'normal' amp, but sounding like a real Class A one. It impressed me and I still own my A50 and use it with pleasure. I did modify it, however, as I am an incurable tweaker and the amp had some minor weaknesses. The main problem was a bad volume control, which I replaced with a very nice Dact CT2 stepped attenuator. That made a positive difference. Even better was my next tweak: replacing the input capacitors with ClarityCap SA's.

Although tweaking is fun, it is also risky and quite a bit of work. That's why I was especially interested in the MB50 power amps. They are based on the same clever circuit, but built with much higher quality components. There's a price to pay for that however, as the monoblocks are each about the same price as the A50 integrated, while delivering the same power into 8 ohm, and a bit more into 4. That does add up to twice the price of the integrated, just for the power amps. 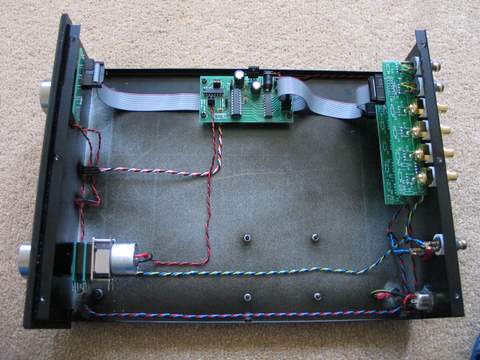 The preamp is a passive affair, with a small external power supply to power the parts necessary for remote control. In combination with a pair of the monoblocks we've in effect got a three box version of the A50, as that has a passive pre-amplifier stage as well. All three boxes are the same size, and nicely made. They certainly make a good impression together. Your sources will have to work with a 10 kOhm input impedance, though, as that's what the preamp has on offer. Most decent sources won't have a problem with that, but quite a few will sound better when faced with an easier load. As always with passive pre's, long leads between the preamp and power amps should be avoided and short, low capacitance interconnects will work best. I used 60 cm homemade Shark pure silver semi-balanced cables terminated with WBT Nextgen plugs. 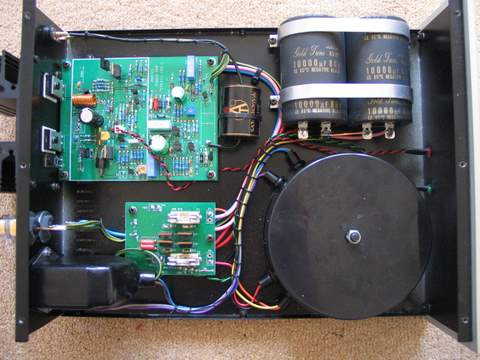 A look inside the MB50's shows that they come completely pre-tweaked. All components are of the highest quality and build quality is excellent. The transformer is a very nice potted toroid, of the same rating as the one in the stereo A50, making it effectively twice the size. The reservoir capacitors are huge Nichicon 'Gold Tune' ones, rated at 10,000 uF each. The improved power supply is reflected in the specifications too: where the A50 produced 70 watts in 4 ohm, the MB50's nicely double their 8 ohm power output to a full 100 watts in 4 ohm. The input capacitors are ClarityCap SA's, just what I used for the A50. In all, I can honestly say that I didn't spot any possible upgrade anywhere in these power amps. In addition, the amps have the same protection circuit as the A50, claiming to prevent damage when short circuiting or overloading the amps, without any effect on sound quality. 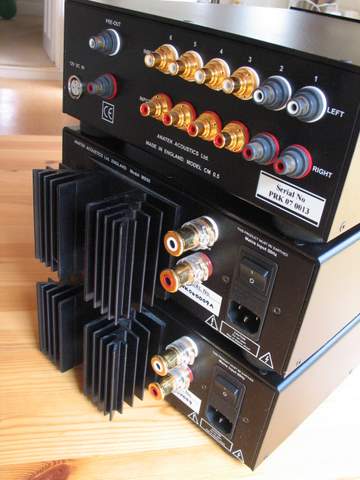 The preamp is very nicely built as well, although almost empty except for a small PCB and a volume control. It's completely minimalistic, with just a selector and a volume control and no other facilities at all. Both the power amp and the preamp use WBT Nextgen phono connectors. On the preamp 2 inputs are fitted with them while the other 4 have good quality "normal" WBT phono plugs. I did use interconnects that are fitted with WBT Nextgen plugs too, but I failed to notice any significant difference between the Nextgen and the normal inputs. Both sounded fine to me. The preamp's volume control is a motorised potentiometer and claimed to be of very high quality with a channel balance that is equal to a stepped attenuator. I indeed didn't notice any problems, even at very low volumes. The remote control that came with the review sample was a simple "one for all" standard remote. This has now been replaced with a dedicated remote, which is shown in the picture. Both are pretty basic, and for the price of this preamp I would have expected something a bit more classy, to be honest. 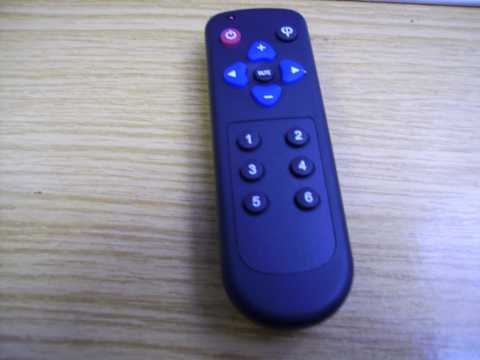 Which leads me to one sad thing that I have to report, and that's the fact that one of the monoblocks arrived broken, and when the whole set was replaced the new preamp didn't respond to the remote control. Luckily Martyn Hook of Anatek is very friendly and helpful, so if you are as unlucky as I was, I'm sure the problem will be solved very quickly. I don't care that much about remote control, so I just used the preamp without it, which is no problem at all.

I first introduced the power amps in my system, to be able to assess the effect of both components separately. They replaced my modified Electrocompaniet ECI-2, used as a power amp. I have to add that I like my ECI-2 very much. Still, the difference was instant, and profound. Compared to the Electrocompaniet these monoblocks sound very tight and precise. Although the ECI-2 is also rated at 50 Watt into 8 Ohm, and sounds bigger than that, the Anatek monoblocks sounded even more powerful and controlled. It is not that they will play much louder, they won't, but they just have much more control over the speaker. They also have the same engaging character as the A50, making music sound alive and drawing your attention to the performance and not to the reproduction.

Later, I also compared the MB50s to my A50 integrated and they make the A50 sound somewhat thin and lightweight. I guess the word is authority. The MB50's have it in spades. They're in complete control all the time, never challenged or getting into trouble by what the music asks. The A50 has the same engaging character, with focus and clarity that are not that much behind its bigger family members. But ultimately the three box combination is in a different league, no matter how familiar and how good the integrated sounds.

When I subsequently replaced my Django transformer linestage with the CM 0.5 passive preamp, I didn't really notice any difference. I already knew that the Django is an excellent preamp, which confirms that the CM 0.5 is a very good linestage too. My only problem is the fact that the Anatek pre is about twice the price of the Django, which more or less disqualifies it as far as I'm concerned. If you insist on a matching preamp for the monoblocks, or really value remote control very highly, you might not mind paying that sort of money, but I am very happy with my Django, and wasn't impressed with the CM 0.5 value-wise, no matter how good it sounded. When I returned to the Django, after several weeks with the CM 0.5, I didn"t notice much difference either, with the Django perhaps even sounding a bit more open.

The monoblocks, meanwhile, continued to impress me. CD players came and went, preamps where changed, loudspeakers replaced, but these two little boxes just did whatever the rest of the system asked them to do. They're so good and well behaved that, at times, I almost forgot that they were there. Not that they aren't noticable: they do have a strong energetic presence, but they just have very few flaws and work with just about anything I threw at them, music and equipment wise. They posess a form of control that liberates the music, a tight grip on things that allows the message to get through but that keeps the reproduction chain out of the way. Speakers simply have to behave. One of their strongest points is focus and they are able to keep things rock solid where they belong, no matter what happens. Voices have a real presence and location, and even a double bass takes on a well defined shape and place within the music, without losing any of its impact or drive. It's very addictive what these little amps can do. It's a bit like good suspension on a car: more control, less problems, more fun. Combine that sort of behaviour with a very refined, detailled and silky treble and the package is complete. I just wish I could afford them.

I tried to hang on to them for as long as possible, but finally the moment came to start using my own Electrocompaniet again. I cannot say that I was disappointed with my own power amp, as my modified ECI-2 is an excellent amplifier too, but the difference was still very clear. The Electrocompaniet sounds a little bit warmer, but lacks the precision and drive in the lower regions. It is also noticably duller in the midrange, and a bit softer and less refined in the upper frequencies. The difference is more than big enough to justify the extra money, even if the Anatek power amps are more than twice the price of the Electrocompaniet. I do have to add that the same is true for the difference with the Anatek A50. Good as that little integrated is, these monoblocks are clearly superior and deliver substantially more of the musical message. 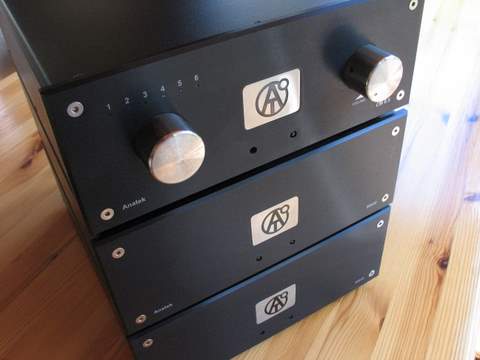 I can be very short about the preamp: excellent as it sounds, I just think it is far too expensive for what it is. There are equally good passive preamps available for much less; the Django just one of them. The monoblocks, however, are a different story. They're not cheap either, but worth every penny in my opinion. They have the ability to open up a system and bring out the best in all partnering equipment. These elegant little monoblocks have a way of drawing you into the music that is highly addictive, without ever drawing attention to themselves. If you need a lot of power they obviously won't do, but if 50 Watts is enough for you then these are as fine a pair of poweramps as you are likely to find at this price. Very highly recommended.