It's time once again to look at a component that most of the non hifi nut public doesn't even know exists. The humble phono stage. What seems like just another amplification stage has an important job to do and can have a significant effect on the system. To put things into perspective it has to provide gain of around x 100 to turn a typical 5mV MM signal into the 0.5V your amp is expecting to see as well as the all important RIAA correction. Get this wrong at the start and you might as well not bother with an expensive amp as it's going to be limited by the fact it's amplifying a crappy signal. Crappy is of course relative as the vast majority of outboard phono stages are a huge step up from the 50 pence op amp phono sections that equipped many integrated amps in the 70s through to the 90s. But I digress. Having mentioned op amps above we're going to change technology completely as the R Zero II Phono is an all valve stage and provides a starting point into the Audio Note range. For those of you who are not well versed in the Audio Note range it consists of numbered levels (from Zero to Five) allowing you to easily assemble a system with parts that work together. As you go up the range the technology evolves and component quality increases. Oh and the price goes up from the fairly reasonable to the "better sell that Ferrari if you want a new pre amp". It's all well explained on their website so I'd recommend a look if you want to understand things better.

The R Zero II is an MM only design and requires the use of a head amp or step up (Audio Note's preferred option) should you wish to run an MC. It's worthwhile to note that all Audio Note stages are MM only even on their top end top dollar pre amps. Valve wise there are a pair of 6112WA miniature dual triodes. These are hard wired but should last a good few years before the stage needs to go back to Audio Note for them to be replaced. Whilst this isn't very tube roller compatible it makes the unit very much plug and play and as you can't play with the configuration you'll just plug it in and get on with listening rather than being tempted to fiddle and faff. Which has to be a good thing.

The R Zero II is available with Black or White acrylic facia or silver anodized aluminium. This look is shared throughout the entire range and if you didn't know which model was the most expensive you'd be hard pushed to tell. Which is a good and bad thing. Good in that all the units look classy but bad if you've bought the top end model and the only obvious difference is the size of the unit and the amount of boxes it comprises. But to be honest if you buy anything Audio Note for looks alone and not for the music it creates I'd wager Peter from Audio Note will hunt you down and insist you give it back. Round the back there is the habitual set of quality phono sockets, and IEC inlet and a ground post. There's also an on off switch and it's positioning clearly shows Audio Note want you to leave the R Zero II on at all times. Which they do and I did. 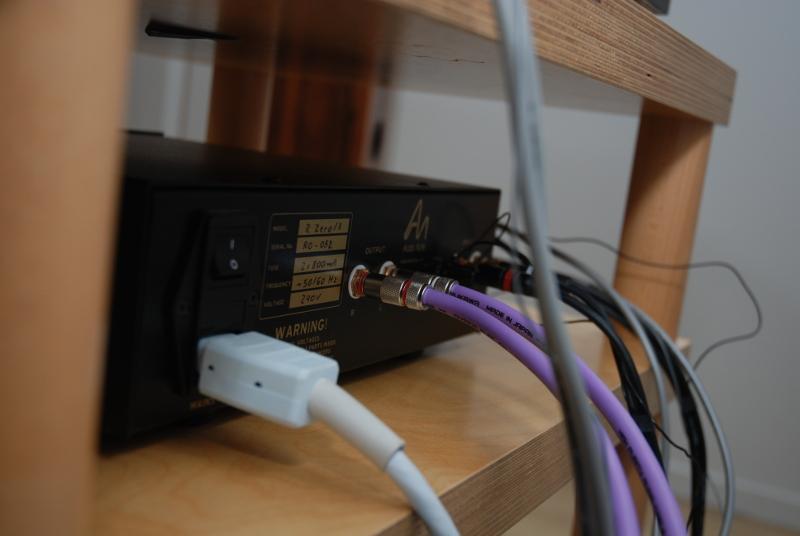 When I started running the R Zero II I found what I thought was a problem. It appeared to be a bit on the noisy side and certainly compared to my habitual Graham Slee Accession or CEC PH53 stages which are both virtually silent. I sent the R Zero II back to Audio Note but after test it appeared that the noise level was well withing the normal parameters. It would seem that the combination of a valve phono stage with a high gain valve amp (my beloved Canary CA608 LV) and high efficiency Living Voice IBX RW3s was amplifying the noise inherent in valve circuits. Now to be honest it's only obvious between tracks and at really high levels and appears to have died down over time (or I've got used to it) and in any case I tended to forget about it as I was too busy listening to the music it makes. But it's worth mentioning and I'd definitely test one in your system if you can especially if your system has similar properties to mine and if you're sensitive to noise. Just to prove this point when my Canary decided to play up at the end of the test period and I plugged in my olde faithful Cyrus One from 1990 the noise was no longer an issue.

While we're talking systems I'd better mention the front end. I'd started off with the Audio Note IQ3 in the TT2 Deluxe/Arm 2 II combination but they then sent me an Io 1 MC with step up to try and that takes things to another level so I thought it would be rude not to use it for testing. As I mentioned above I had the Graham Slee Accession and CEC PH53 on hand for comparison and I ran the aforementioned Canary/LV combination as mentioned above with the Cyrus One and Audio Kultura phono stage making appearances as required in the case of the former and because it happened to arrive at the right moment in the case of the latter.

So what does R Zero II bring to the party when compared to it's transistor brethren? The first thing one notices is that that you don't seem to listen to the hifi aspects but more to the music. There is a wonderful flow and natural character to the sound and it can be quite hard to sit down and actually work what it's doing rather than just enjoying it. But this is a review after all so I forced myself to write some notes and do some comparative tests.

Once you get past the natural character of the sound you'll notice that there's a wonderful tone to both instruments and voices. The clarity is there but it isn't what strikes about the sound. You'll notice interplay between voices during duets and the tune of bass instruments. You'll also remark a wide soundstage with realistic instrument placement. There may even be a touch of warmth but it maybe just that transistor stages can sound a bit cold in comparison. As an example I listened to Paul Simon's Graceland. The opening track "Boy in the Bubble" has what could be described as a lead bass line and the R Zero made more sense of this and the accordion part that goes with it than I've heard previously. Flipping to side 2 and "Under African skies" shows the gorgeous voice of Myriam Makeba and the subtle differences in melody and timing between what she's singing and what Paul Simon is.

Similarly listen to Michael Kiwanuka's Home. The whole ensemble is wonderfully unforced. Again all the instruments are there clearly presented but not thrust at you. It allows you to examine the track as a whole and just revel in the music or if you want to listen to a particular voice or player you can do that as well.

I thought a bit of stadium rock would be a good test so I dug out Pink Floyd's Delicate Sound of Thunder and what better place to start than with Shine on you Crazy Diamond. I've recently discovered the sound of active guitar pickups (as used by Mr Gilmour at the time) and it's blatantly obvious here. There's a slight softening of leading edges of the notes inherent to the technology. This is not the R Zero imparting fluffiness as the cymbals and backing vocals have all the bite they need. On the subject of backing vocals there's a similar effect to that I alluded to in the Paul Simon track - all the voices have their own styles and individualities. When the bass and drums kick in on the track there's plenty of weight without losing speed as impact remains despite the occasional excessive use of processing and electronics. Now if only there was a way to get rid of some of the 80s synth sounds...

I guess here would be a good place for some comparative examples and as the nearest competition I have is the GSP Audio Accession in that it's MM only and around the 1000GBP mark I think it's most suitable for comparison so here we go.

I spun the 12 inch single of Madonna's Love Profusion and it highlighted the difference between these very good stages. Right from the start the R Zero is lightning quick and the kick drum track will have your feet tapping and if I hadn't been suffering from a mild case of vertigo that evening I might well have had a little dance in my listening room. The GSP isn't far behind and trades a little bit of speed for more obvious definition on the kick drum.

When the synthesizers kick in both stages portray them accurately - the R Zero brings the wide soundstage generated by them slightly further out from the speakers and into the room to the point that it seems like it wants to trap you in your chair with a cunning left and right flanking movement. Fortunately I watched Dr Who as a kid and my training to hide behind the sofa at the sight of the Daleks prevented me being caught. Unusually there are male backing vocals on the track and on this the Audio Note makes them just sound more human - they sound more like a real choir and less like a recording of one. They still remind me of the vocals on Madonnas version of American Pie which I'm guessing most of you will consider to not be a good thing - I don't think we can blame Audio Note for this though...

Similar differences show up on Prince's Lotusflower - the GSP is fractionally "cleaner" with some sharper sound stage placement and a it more shimmer on cymbals but the Audio Note draws you into the music and you'll be at the end of the side before you know it.

In comparison to even the cheapest phono stage current residing at Budd Towers you could say the R Zero II is excessively basic. There's no gain or capacitance options, rumble filters or EQ curve variations. It's a bit noisier than it's transistor classmates as well as being more expensive than a lot of them. But never mind any of that. Combined with a good MM or MC with step up it's provided some of the best insight into the music on those black (and multicoloured) discs that I've had the pleasure of listening to.

Some of you will prefer other stages at this price depending on your priorities and I'll not argue with your right to choose. For me I've downright enjoyed all the time the R Zero II has been in the system and if you want to enjoy what's on those records to the extent of forgetting the hifi aspects (which are still there - fret ye not) I would strongly recommend you have a listen to one at your earliest convenience.