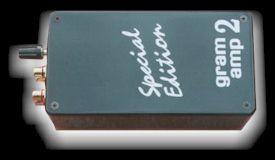 I've just returned from a short visit to France visiting my fellow tnt contributor Geoff Husband, sampling the delights of Brittany and listening to some good music on an array of interesting turntables, arms, cartridges and phono stages. He has amassed a formidable array of products as part of his self-appointed mission to understand what makes a great vinyl front end and share those findings with tnt readers. I wish him well in this baffling task.
While I was their I was able to confirm my conclusions about the Gram Amp 2 SE Phono Stage. If anyone is wondering about getting back into vinyl, playing records for the first time or simply unhappy with the phono stage on their integrated or pre amplifier, then this product is probably the answer for you.


Let's first get things into perspective. The Gram Amp 2 SE can be bought for significantly less than a typical MC cartridge and I auditioned it with two very inexpensive cartridges - an AT95E and a Goldring Elektra. At less than 300 Euros this combination comes in below that which one would be required to shell out for a replacement MC cartridge when that all important diamond tip is ground away.
So we are talking about a very reasonable entry here into the world of analogue replay for those unfortunate enough to have purchased an amplifier with no vinyl input.

This product is housed in a small plastic box with a pair of input phonos, a pair of output phonos and a grounding binding post. Power is supplied by a plug-top transformer. It's designed for the usual 47kohm resistive load and that's it. But as it is designed to accommodate a wide range of MM cartridges you can just plug it in and play.
The SE variant of the Gram Amp 2 has a bigger power supply and a 50% higher voltage regulator inside the preamp to better handle transients. Also the higher voltage gives a bigger open loop gain, and therefore the gain of the stage is increased from 38.25dB to 41.5dB (50%), which should make the unit more compatible with low output cartridges or amplifiers demanding more drive current.
The design employs an active equalisation technique which amongst other things aims to handle high levels without harshness. Graham Slee the designer says that in common with many audiophile products "It's a case of component selection, exhaustive trials showing that this particular value of this particular range and manufacture, is the only one that works."


One of the first tests that can be applied when trying a phono stage is the amount of hum and hiss when the volume is wound up. I can report that I had no problem with mains borne hum with this product.
In fact background noise was impressively low - well below the surface noise on a typical record. But of course one can put to one side technical specifications and S/N ratios and the like because what is important is how it sounds.
To be frank I approached this review with a feeling of wanting to get it over with in the expectation that I would want to rapidly return to my normal system..........wrong!

So How Does it Sound?

There I was coffee in hand and book to read, seating myself to listen to the Gram Amp 2 SE wired up to the Naim amps operating in active mode and LP12/Origin Live Silver 250 front end fitted with the Goldring Elektra, almost treating the audition as a chore, because I always undertake to listen to something for a few weeks - whether I like it or not- to be sure of my assessment.
But, I was very pleasantly surprised. With acoustic music such as Eva Cassidy the emotion of her performance was readily conveyed and the sweet balance of the Gram Amp 2 SE suited this performance very well indeed.
On more lively material like The Chemical Brothers the Gram Amp acquitted itself equally well, however. Conveying excitement and supporting high levels of reproduction without harshness (this was a quality that I noted before enquiring about the technical attributes of the product).
During the trial I took charge of my new Orbe SE and listening with the Gram Amp conveyed impressive R-L separation on records that indulge in sonic pyrotechnics, whilst imaging overall was good, characterised by projection of vocals and clear separation of instruments and performers.
I then tried the product in combination with the AT95E and this confirmed my positive views but to my ear the sound, whilst more detailed and immediate, was not as flowing as with the Goldring.

Bearing in mind that this modest cartridge phono-amp was feeding a front-end and amplification that would cost many thousands of Euros, I then hooked up speakers costing many more thousands of Euros, driven by the Naims in a passive configuration. These speakers (which I plan to review soon if I like them enough) are sensitive and able to go very loud without any noticeable distortion using the MC AT33. To the Gram Amp's credit it performed admirably in this company too.

Now of course upon returning to my usual AT33 and Naim MC stage I noticed a significant improvement in sound quality and that was to be entirely expected. But consider this...........while at Geoff's and in the company of some very exalted MC cartridges and stages I listened to the Music Maker by the The Cartridge Man in tandem with the Gram Amp 2 and this combination was very good indeed and one that we were both more than happy to listen to despite the other Hi-Fi delights available.

Having somewhat reluctantly undertaken this audition, I ended up enjoying this product so much that I had no great compulsion to go back to my AT33 MC cartridge. But ultimately I prefer the AT33 and will continue to use it...... considering the price differential I am somewhat relieved!
Having said that, the music the Gram Amp 2 SE produced was very well tonally balanced. It was easy to listen to but also imparted excitement without edginess. Amazingly, when partnered with quite expensive frontends and 'speakers, the Gram SE II was not left wanting, it just played highly enjoyable music. And it can step up to partnering some pretty serious MM cartridges as well.
When one considers the potentially low running costs of a MM cartridge, this product can only be thoroughly recommended to those lacking a phono stage. It should also be considered by those who might need a solution to a system with some harshness or frankly anyone with an amplifier having a phono stage that they feel isn't to their liking.