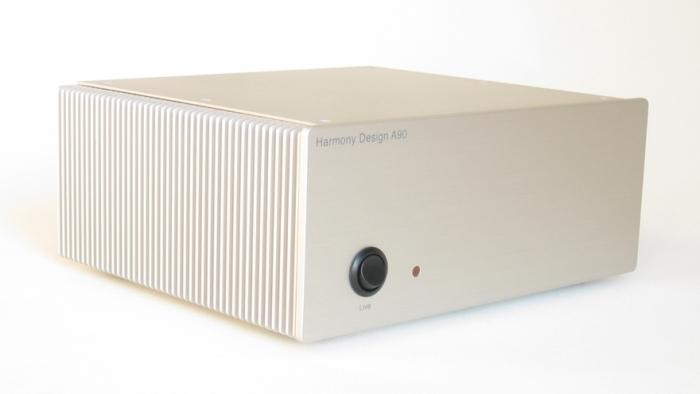 Power amps may possibly be the least exciting part of a hifi system (ok power supplies are probably more boring unless you're a Naim fan) but I'd go as far as suggesting that they're like the engine room of a ship. You don't hear about them until it doesn't work well. They both drive their respective systems and as a result can be the undoing of them as well as the making of them.

The unit we have here hails from Sweden and was supplied along with its D90 DAC sibling and I've finally got round to giving it its own appraisal. I'd suggest looking at that review for further info on Harmony Design as both were used together during the review period and I'm going to be mentioning it quite a bit during this review. I may even recycle the occasional poor quality gag so my apologies in advance for that.

The A90 is half width like its associated DAC but this time we're looking size wise at the full three volume hard back copy of the Lord of the Rings. Fortunately similar avoidance of boredom in the second volume and rescue by Gandalf can also be achieved with this product so it's off to a good start. Build wise it's solid without being a tank. It's well finished and avoids unnecessary bling, flashing LEDS or VU meters. Round the back there are a pair of XLR inputs and a high quality pair of speaker sockets. Power is via the habitual IEC (see picture below) allowing me to run my usual set of Supra Lo Rad based mains leads (which also hail from Sweden - a veritable smorgasbord of Nordic hifi if ever there was one). Matthias from Harmony was nice enough to supply phono to XLR and XLR to XLR cables to allow me to run the amp with either the variable output Graham Slee Accession phono amp or the Harmony D90 which also has this feature. Round the front there is a power switch with red power on LED. The amp is available in the silver version above (the one I have) or a very stealth bomber black version pictured below which wouldn't look out of place in Darth Vader's listening room. 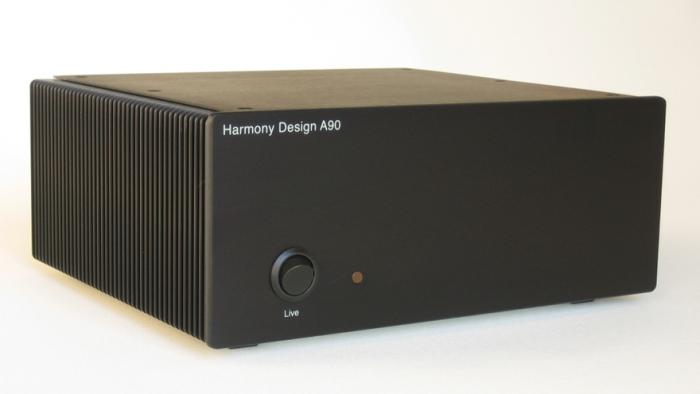 As for the D90 the A90 has a few tricks up its sleeve that are under the hood and invisible without the use of a screwdriver. In particular (and this is info direct from Harmony - not me investigating the circuit) the A90 is equipped with a type of coupling that ensures that the loudspeaker is driven by power instead of with voltage. The A90 has apparently the only output stage on the market that drives the loudspeaker this way but which at the same time is capable of working with all speakers on the market.

Both the architecture of the case and the electronics are based on keeping the different blocks inherent in any amp design separated from each other. Transformer / mains and the amplifier itself have their own room in the box. Input steps and drive stages have their own control of the voltage which is separated from the output of the output stage, which gives the great advantage that the output stage can be loaded to the maximum without the input and drive steps being particularly affected. In theory this means the A90 can be loaded hard without the sound deteriorating.

Another supposed advantage of this architecture is that even at low levels, a significantly better sound is produced when the drive has its own stable voltage than when it is fed by the unregulated voltage which feeds the output transistors. The design also ensures the current signal paths through the circuit boards are very short: The current from the mains power supply has a maximum of 5 cm circuit board lead to get through before it reaches the output amplifiers. While this isn't quite 47 Lab Gaincard short it's still not a long way by any means you want to measure it (and certainly shorter than the Kessel run for all you Star Wars fans out there). 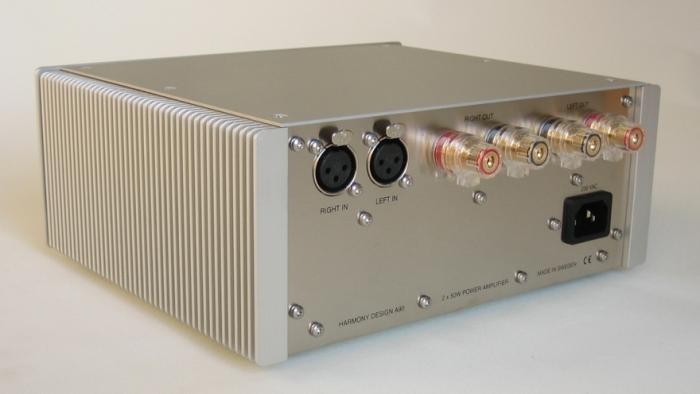 Now this is all well and good but you're reading this review to find out if it's any good so let's get on with the listening. I ran the A90 with the D90 DAC and the Graham Slee Accession as preamps and the Living Voice IBXRW3s were on the receiving end. The Canary CA608LV was on hand for valid comparison as it's essentially a power amp circuit with a volume control.

So what does the A90 sound like? Well on switch on it sounds like nothing as there is a brief delay before any sound comes out of it and it's the only occasion when it flashes to indicate switch on is in progress. Once the LED stops flashing you're in business. Straight off the bat it's certainly a very different type of sound that the Canary 608LV I normally use. The Canary majors on musical flow and tonal colour. It's a sound I love and it works particularly well with my speakers of choice. The A90 is more about instrumental separation and making each part obvious and clearly placed in space. Looking at my notes from the listening sessions the idea of easy to follow instruments clearly delineated comes up again and again. Taking that old show favourite Peter Gabriel's Sledgehammer the bass line has a fabulous sense of pitch and obvious stop start with no overhang. There's no muddying in the low end. The Canary in comparison is a bit warmer but I would say has a more human quality about the way it presents rhythms. It's quite a hard thing to describe until you've heard it and I'm sure the Canary trades off some separation to achieve it. Anyway back to the A90

The same characteristics continue on the debut Gorillaz album and in particular on the last three tracks which sort of run together into a short story. I don't think I've ever heard the backing harmonies as clearly or as widely placed in the soundstage. Again clarity prevails showing off vocal detail and diction be it spoken or sung and once gain bass is clear but possibly lacking a little warmth. These characteristics make it easy to listen to just one instrument or voice or to enjoy the sum of all the parts - the A90 allows you to do either. Also if you just want to enjoy some pop music and dance around the lounge - put Jain's Dynabeat on and revel in the A90s ability to go really low on the infra bass part while keeping the percussion in perfect time. My 6 year old particularly enjoyed this bit of the test!

As I alluded to earlier this is a clean sounding unit and frankly if you want to hear all the layers on a recording and how it's been produced and effects that have been used just try Moby's Porcelain and you'll hear his natural voice and what sounds to me like a vocoder. I'd never really noticed the two voices are separated even if I think it's the same part that has ended up on two tracks - it's not just an effected single voice on a single track - the full scale and character of the untreated voice is obvious and makes the whole track more beguiling and less robotic. On the subject of robots I also played Daft Punk's Beyond - the way the voice seems to swell indicates the A90 can provide the necessary subtlety in addition to the required impact for the opening orchestral part.

From a volume point of view the 2x50W is more than sufficient - I don't think I got the volume on the D90 beyond 9 o'clock and the A90 certainly showed it's ability to go loud where required with no obvious strain. If you've got sensitive speakers you're going to give up way before the A90 does. Having recently heard a set of the latest spec Stirling LS3/5a speakers I have a feeling the A90 would work well with monitors - even ones with ludicrously low sensitivity as the LS3/5a is reknown for. In fact I might just see if I can get hold of a pair as I have a feeling this could be a pretty special combination. But I digress although it's probably relevant to the A90s sound. I think it's fair to say it imparts little of it's own effect on the signal which is what makes it intriguing and why it stayed in the system for quite a long time.

So what we have here is a compact, well built no frills power amp that stayed in my system for a substantial time causing no problems whatsoever at any moment. It digs superbly into the mix and creates one of the best stereo images I've heard. It's particularly good at showing what every instrument is doing and seems to work wonders on vocal diction. My main criticism (and this is against a valve amp that would be twice as pricey as the A90 if available today) is I'd prefer a little bit more flow and colour. Having heard what it can do I'd really like to be able to have a perfect cross between the two. But your priorities may be different to mine and if clarity and staging and a studio like presentation (in the best possible non Yamaha NS10m way) are the things that float your boat the A90 makes a compelling case for itself.