This is the matching preamp for the Eastern Electric Mimimax Power Amp which I reviewed quite a while back. It came equally well packed and equipped with user manual in the right language. 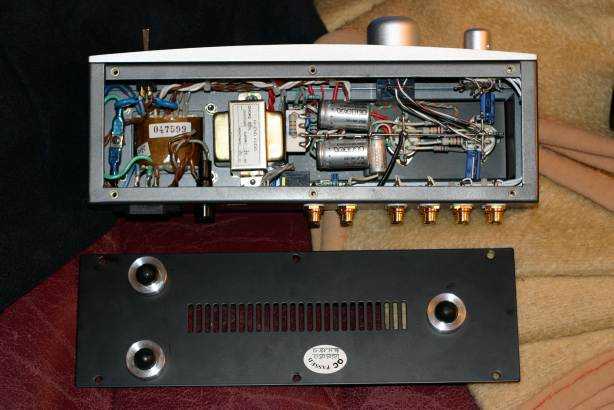 On the front, there is a long power switch and a bright blue light emitting diode (LED). This is quite matching the design of the power amp.

On the back, there are two pairs of RCA phono sockets for connecting into power amps making biamping possible, an IEC power cord inlet with integrated fuse holder, and inputs for several line level input sources.

Viewing the top, there are three tubes both accessable and unprotected to the user, two of them of type ECC82/12AU7, and one of type 6AX4/EZ90. The rightmost tube (that above the input selector) is for the amplification stage, and the middle tube is just an output follower.

The tube next to the power transformer is for high voltage rectification. Instead of silicon rectifiers, a tube rectifier is used here.

There is also a big power transformer, with beautiful end cap, on the top.

Opening the base board is quite easy. One can detect the power supply choke and a well executed point-to-point wiring. Closer look at the wiring revealed that it is a standard two stage construction. The signals coming from the RCA input sockets are routed to the selector switch with coaxial cables, then transported to the 100k blue Alps volume pot, then go to the first tube. The tube under the input selector contains two halves for each channel, and forms a voltage amplification stage. It works with cathode bypass, and its output is coupled directly to the second tube in the middle, which works as output follower, again with both halves for each channel.

Always having both channels in one tube, the user is freed from the need of matching left/right tubes. He even can use different tubes for amplification stage and output follower, deliberately.

Analysis of the circuit makes it clear, that the input tube is working without any global or local feedback, and at the same time provides the full output swing. Thus, the sound character of this preamp, is dominantly determined by the sound of the input stage tube. 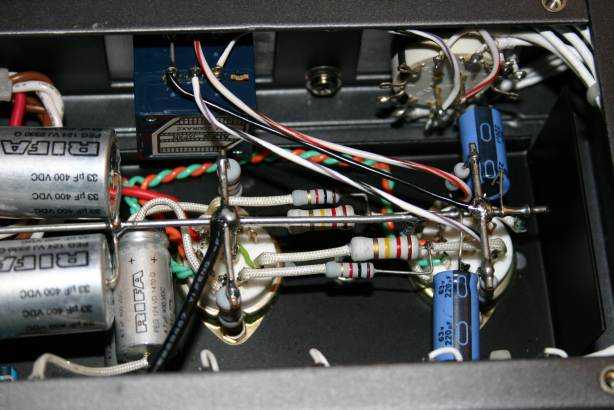 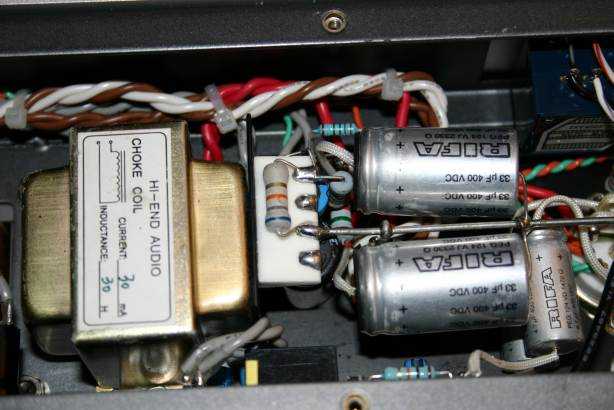 After power on, one has to wait a minute, before a muting relay sitting at the output phono sockets, releases the signal.

I did first listening with "Eastern Electric" labelled 12AU7 tubes. The sound was open and sparkingly, reminding me of single ended tubes. Classical music and voices were rendered with a relaxing combination of beauty and naturalism. Midrange clarity was OK, but nothing special. Nethertheless this was a preamp, that I would be happy to live with.

Bass was natural, but also a bit soft and not that deep, though. This was evident, when listening to heavy dancefloor music, like Medesky, Martin and Wood.

I switched to Telefunken 5965 first, and later to a Telefunken E80CC as voltage amplification tube. While the Telefunken 5965 was already better than the standard Eastern Electric tube, the real thing was the E80CC, which brough incredible midrange palpability and unbelievable realism, and betters the already good performance of the standard tubes to premium level.

Of course changing tubes for output follower and rectification, changes the overall sound, too, but not to the extent like the tube in the amplification stage.

Before, I had contact with other preamps, be it transistor or tubes. The Eastern Electric Preamp does not hide that it is a tube preamp. Quite the contrary: it shows the character of the input tube, and finally, it is as good - sonically - as its input tube.

The Conrad-Johnsons, PV10 and PV12 and the like, have a quite simliar circuit inside, but omit the bypass capaciter, which yields local feedback to the line stage input tube. Then they have solid state rectification and regulation of voltages. As a consequence, a CJ preamp sounds always correct, but sometimes wiry, more like a transistor.

The Shindo Claret, and other smaller Shindo preamps, also have a similiar configuration, but apply global feedback around the line stage. They sound magical musical and "right", but at the same time a bit opaque, missing the clarity and openness of a non-feedback line stage.

Using the Telefunken E80CC, I would rate the overall sound quality slightly above both those mentioned two tube preamps. With the standard Eastern Electric tube complement, the EE preamp would be comparable with a CJ PV10.

When tied together with the Eastern Electric Mimimax Power Amp the overall sound is tubelike, yet detailed and controlled, which I find much more clever and less expensive than buying a real single ended tube like 300B and a transparent line stage. Latter combination costs several times as much and has next to zero loudspeaker control.

The Eastern Electric Preamp is not for everyone. It is distinctive.
I recommend the Minimax to all enthusiasts who want to hear the sound of a tube. It is a real tweaker's delight.