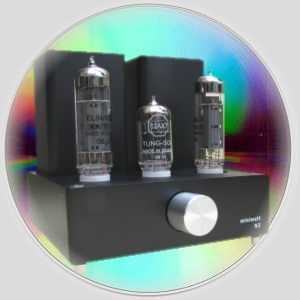 I was quite astonished by the performance of the original Miniwatt amplifier when I reviewed it nearly a year ago. It punched well above both its size and price. As I anticipated, the Miniwatt stirred up a lot of interest and gathered a loyal following. Miniwatt have recently brought out a follow-up model, the N3, not quite as tiny as the original Miniwatt, and sporting only three valves instead of four. So how does it compare to its very successful predecessor? 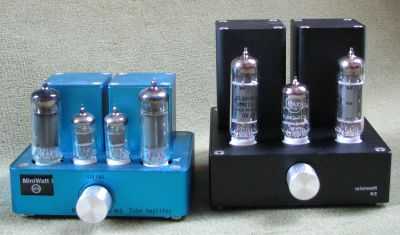 The N3 is only available in two colours, black and silver and I suspect that those colours were probably the most requested for the original Miniwatt. The N3 looks slightly more sophisticated than the original amp, and the black and silver are more in keeping with that more suave appearance. The N3 also claims an enhanced circuit comprising of a 12AX7 (ECC83) twin triode feeding a single EL84 (6BQ5) per channel. Although it is touted as an integrated amplifier, it's really just a volume control in front a power amplifier. Power output is 3.5 watts per channel which is slightly more than the 2.5w of the original Miniwatt. 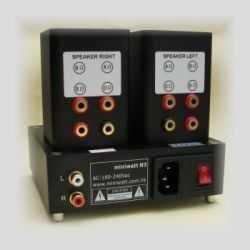 
Physically, the N3 is slightly larger than the original Miniwatt. The case is fractionally larger, and the output transformers are taller, as are the valves, but it is still a remarkably compact package for a valve amplifier. The compactness is once again due to the use of an ("advanced") switched mode power supply. On the rear of the N3 is a pair of RCA sockets, and speaker connections to allow matching with 4, 6, and 8 ohm speaker impedances. Power input is via a switched IEC socket. The front panel has a silver knob to control the volume and over all, I think that the N3 looks better than the original.

The Sovtek EL84's in the N3 are a "platinum matched pair", and according to Miniwatt,"the platinum matching process consists of a 24-hour tube burn-in period followed by a bias (plate) current measurement in milliamps. It produces a smooth, warm and mellow sound." It is possible to 'roll the valves' with the N3. "With our constant current drain topology, you can play tube rolling by simply replacing the power tubes - EL84 with a matched pair, and as long as the power tubes are matched you don't need to adjust the bias.

On the tube rolling front, there are quite a few brands of new or new-old-stock (NOS) EL84s and 12AX7s on the market and at relatively reasonable prices. You can even get various NOS tubes (Telefunken, Mullard, Siemens...)."

For the first part of the review, I put the N3 into a system that comprised a Virtue Audio Piano CDP, and IPL A2 speakers. I hadn't done any burning in with the N3 and that was quite apparent (or should I say audible). The N3 gets very noticeably better over the first 10 hours or so and probably takes nearer 50-80 hours to sound its best. Even then, as I found with the original Miniwatt, you don't get a lot of volume out of it unless you are using extremely efficient speakers. I found it best with the IPL A2's that are 89db/1 metre efficient, to use a pre amp with a bit of gain. I used both the Audiodigit TubePre, and the KingRex Preference with excellent results although the latter is of course a real mis-match in terms of cost. With the pre stage in the system, the N3 not only goes louder, in my opinion is just sounds 'better' too. 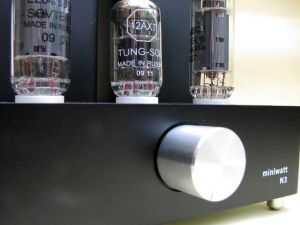 The obvious comparison to make is how the N3 sounds compared to the original Miniwatt. The answer to that is that there is still a similarity in how they sound, but the N3 sounds more sophisticated, more mature if you like. The original Miniwatt was great fun to listen to, and good enough for serious auditioning but that excitement could be a little too much for longer term listening. The N3 replaces some of the excitement with a calmer more 'adult' presentation, although it certainly isn't lacking in its ability to excite too, albeit in a slightly different manner. With the TubePre in place, the amount of bass was again surprising for such a physically small amplifier with a claimed output of only 3.5 watts per channel! The bass is also relatively well-controlled and tuneful, and this gives the music real scale.

The N3 is reasonably transparent and produces all the smaller details clearly. It conveys emotion very well, particularly noticeable with vocals and strings. It's very 'even-handed' across the frequency range and doesn't distract the listener from the music. I was going to write that the sound-stage was wide but not too deep, but when I put the N3 in my main system with the Hawthorn Audio Duets (open baffle) in a larger room, the sound-stage was as deep as with most other amplifiers that I have used in that system.

Timing is spot on and adds to the musicality of the N3. There is also a real presence with the music, with performers appearing to be in the room, rather than hiding at the back of it. In my main system, the N3 was fed from a Burson Buffer with about 3db gain and it was possible to run the system almost at full volume, despite the Duets being around 95 db efficient. However, even flat-out, it retained its quality of music and presentation. Tonally it is fairly neutral with just a hint of sweetness to make the music very enjoyable (think apple rather than chocolate). I would say that the N3 just favours classical music but in fairness, it sounded good with all types of music. I ended nearly every session with the N3 wanting more music. I love that 'just one more track' feeling you get with good equipment.

A few other points. The N3 does run warm in that small enclosure but not overly so, and not as warm as the original Miniwatt. When not playing music, the amplifier is dead quiet. It works well with either a solid-state or a valve buffer/pre amp and I would honestly not be able to say which I preffered although the combination of Burson Buffer and N3 was exquisite! The N3 comes very well packaged and you need have no reservations about ordering it from Hong Kong. The carton that it comes in even has a handle making it very easy to transport the N3 should you wish to take it to hi-fi get-togethers.

If you have heard the original Miniwatt amplifier, imagine that sound but more refined, and you have the N3. If you like the 'valve sound' but need something more the size of a class-T amp, the N3 would fit your requirements very well. At $378 the N3 is quite a bit more than the original Miniwatt so I don't see it being quite such a speculative buy like its predecessor. However, the N3 is a clear improvement and is worthy of serious consideration, and I still expect it to gain a decent reputation, particularly amongst those 'already-converted' to the Miniwatt virtues. Just make sure that you use it with another gain-stage, with reasonably efficient speakers, and the N3 will provide you with many hours of real musical enjoyment.