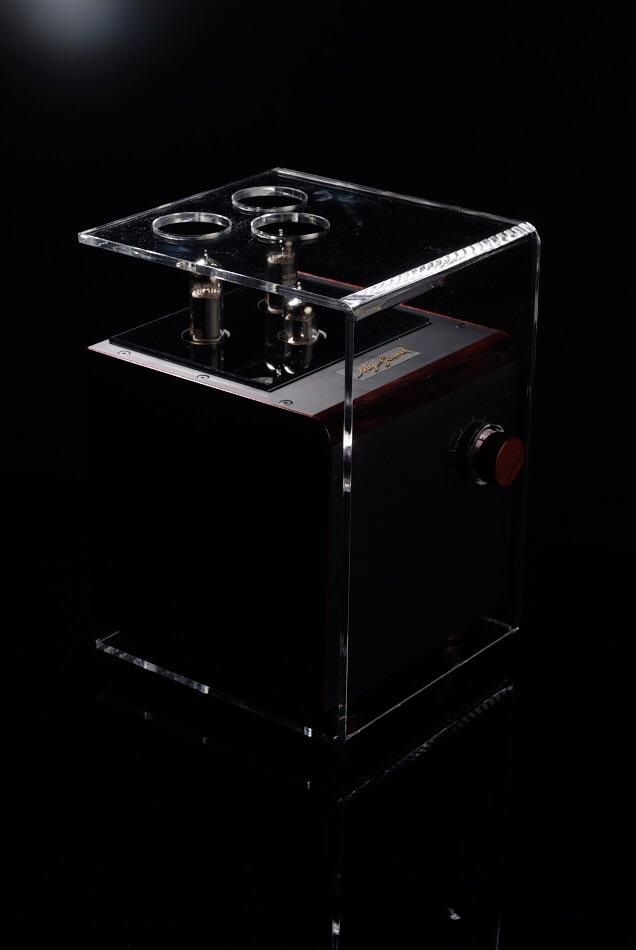 For a number of years, I have been an admirer of the H J Leak valve amplifiers made in the 1950s and 60s. The Stereo 20 has a very active following and uses the sweet EL84 valve in class A, push pull.

These old Leak amplifiers sound wonderful when restored, but this route to achieving amplifier excellence is not for everyone. If you are looking for a modern amplifier, using the EL84 valve, but without the work restoration entails, and you want a warranty then look no further.

The MySound Cube is not a copy of the Leak amplifier, far from it. The Cube uses solid state rectification, a feature that will horrify traditionalists. The Cube is a push pull design, class A, using the EL84s. The EL84s are fixed bias, not auto biasing as with the Leak amplifiers, so requiring a periodic check and adjustment.

MySound claim 12W output and 0.1% distortion at 1W with a bandwidth of 16Hz - 65kHz. As usual with valve amplifiers the Cube comes with 4 and 8 Ohm outputs. The input is a regular single ended RCA phono socket and each monoblock has it's own volume control. 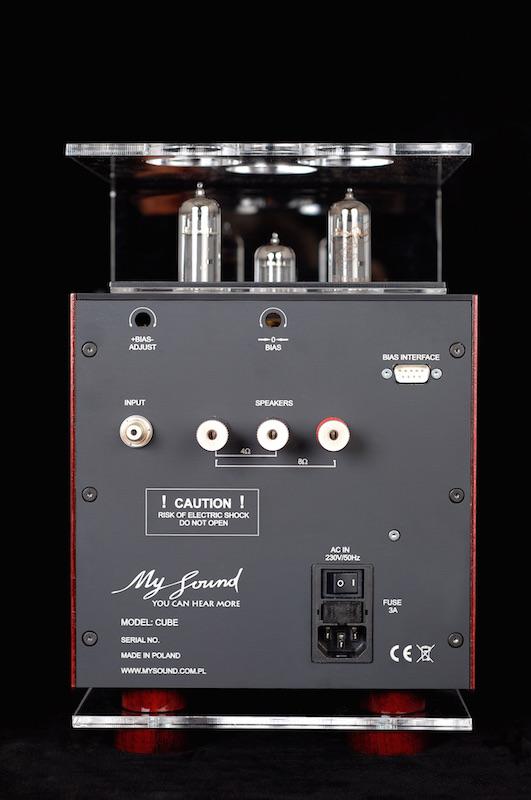 Rear view of the MySound Cube.

So far you might think there is not much to differentiate the Cubes from mass produced fair. Now take a look and you will see a pair of amplifiers that really stand out from the masses.

The name follows the shape, a cube, with the valves projecting from the top and then the whole lot is wrapped in an unusual perspex cover. These Cubes are finished in the wonderful looking bubinga wood, beautifully lacquered, they really do look the part. If the dark bubinga wood is not to your liking the Cubes are also available in a light bubinga wood, white or black gloss lacquer. If those finishes do not fit your needs then MySound will apply any custom wood and finish you require. 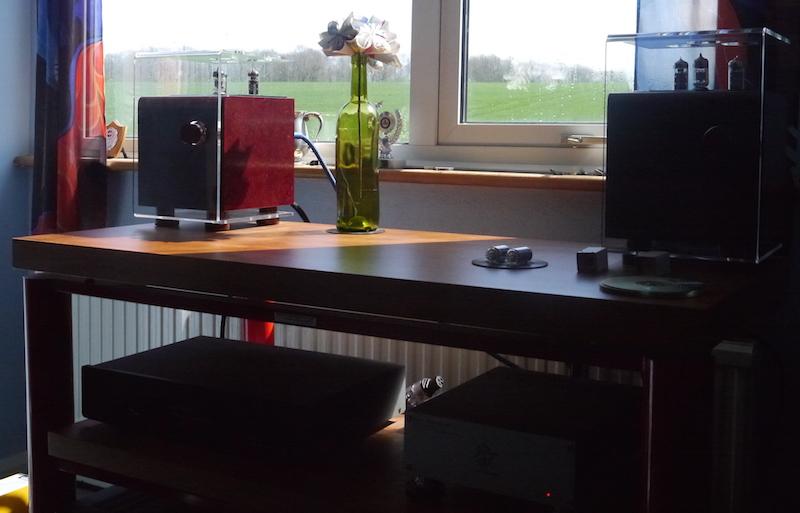 The MySound Cubes on my rack.

Each monoblock has just the single input, not the most practical of devices, but with a single source they are easy to use. The volume controls is a Khozmo stepped attenuator, it is silky smooth and very accurate and easy to balance the volume from each amplifier.

As the Cubes look so amazing you are not going to hide them away, so manually changing from a digital source (DAC) to analogue (phono) as I did is not difficult. If you are like me, one source is used for a considerable time before swapping, so input selection is not much of a chore. I did use the cubes with my MFA transformer pre-amp in the chain with the volume on the Cubes set at maximum.

This configuration worked well and simplified input selection. For the purposes of this review I fed the sources in directly to avoid any additional effect on the sound. 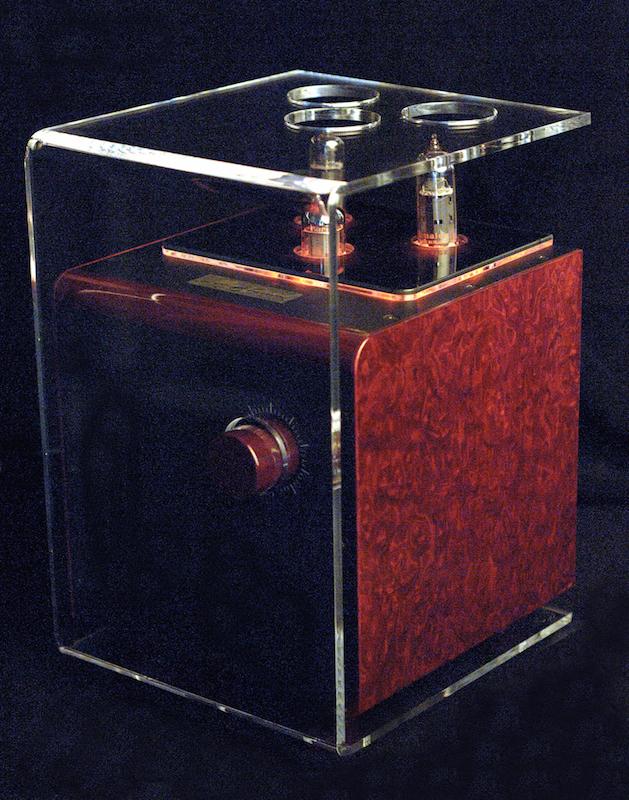 Close up view of the Cube showing the wonderful woodwork.

The rest of the system was my Eryk S Concept Superioro speakers, the RT Audio Design DAC fed data via coaxial SPDIF from a PC running Audiophile Linux. For an analogue source I used my Whest PS30R phono stage, Garrard 401 in custom plinth with Rega RB1000 arm and Benz Micro Wood. I also had a Lampizator Silk mains filter feeding the amps, the DAC is battery powered with the charging circuit disconnected for critical listening.

Normally I don't like separate volume controls for each channel, but with the stepped control and graduated markings they were easy to use and easy to set the L/R balance.

From the first beat the amps showed their modern origins, the bass was tight and well controlled. Some valve amps can sound soft and wooly in the lower regions although I have never found this a problem with my Leak Stereo 20.

Playing Billy Joel on vinyl, the album "Storm Front" really displayed the Cubes' strict timing. I am not particularly familiar with the Billy Joel album as it was a village fete purchase so it gets passed over for my regular favourites.

I will be listening to this album more regularly as well as digging out my other Billy Joel records, I had forgotten how entertaining Billy could be.

Next on the turntable was the 2011 album "Paper Airplane" from Alison Krauss & Union Station. This is supposed to be an audiophile quality album pressed on 180gm vinyl. The back ground is stunningly quiet, but I am not sure the master is all it is supposed to be. I also have this album as a download in mp3 format, and they don't sound massively different.

What does show through is the wonderful vocals from Alison Krauss, the Cubes really allow the richness of Alison's vocals to shine. As with the Billy Joel album the Cubes let the best aspects of the recording through and provide an entertaining performance.

Using vinyl as the source needs time, there is no jumping from one artist and album track to another at the touch on the tablet. You must relax and allow yourself to be drawn in to the performance. I thoroughly enjoyed my evening with the Cubes and some of my vinyl collection. The Cubes are no earth moving rock amplifier, they are all about subtlety and texture. To allow the Cubes to give their best you need a a speaker that is both efficient and an easy load.

These amplifiers also need a clean mains supply. When I first tried them it was without the Lampizator Silk filter and they could sound rough in the high frequencies. The roughness disappeared as soon as the Silk filter was in place and the Cubes became much more consistent and enjoyable.

Switching to my digital source and the Jesse Cooke album "Vertigo" from 1998 I was again drawn into the music and listened to the complete album.

Jesse Cook is a Canadian guitarist, composer, producer and influential figure in the "Nuevo Flamenco" style. The Cubes, at moderate volume, easily displayed the complex rhythms and acoustic guitar tones. There was good attack to the notes and the decay was beautifully presented, a cleaner and more detailed sound than the Leak Stereo 20 or my preferred Stereo 50.

Another favourite album of mine is the Joan Baez "Ring Them Bells" from 1995, a beautiful acoustic recording with various guests appearing. The Cubes again delivered the lovely ambience of the recording, the singers we are clearly placed in the sound stage. These amplifiers really draw you into the music as long as you play within their strengths.

As an experiment I tried some Led Zeppelin, "Whole Lotta Love" from their Early Days, The Best of Led Zeppelin album released in 1999. As expected, in the loud parts it did not work well, though the quieter middle section was probably the best rendition I have ever heard.

The percussion and vocals were delivered with a fine texture and detailed harmonics that I have not heard so clearly using any other amplifier. The loud sections seemed squashed and lacked slam, this may not be just the amplifier's fault, my Superioro speakers only have a 4" driver so heavy rock is really not to their taste.

Back to some music that is better suited to the combination of the Cubes and Superioros, "Desperado" from The Carpenters "The Ultimate Collection" album. All I can say about this is I was swept back to the early 1970s and my teenage years. I was in love with Karen again!

Returning to the present day, well almost, and the Gregory Porter hit album "Liquid Spirit". Gregory's voice washes over you like honey, whilst the plucked double bass is delivered with a wonderful leading edge and decay.

During my listening sessions I began to realise that my little Superioro speakers, whilst good, did not allow the Cubes to show their abilities in the lower bass region. I could tell that the bass was well controlled and clean, but not how deep the Cubes could really go.

At this point I had a visit from Greg Drygala from GPoint-Audio, the UK distributor of the Cubes. Greg brought with him a pair of hORNS.pl Mummy speakers, suitable efficient and with a 12" bass driver. There will be a separate review of these unusual looking speakers. Now we had a speaker to challenge the Cubes across the full frequency spectrum. 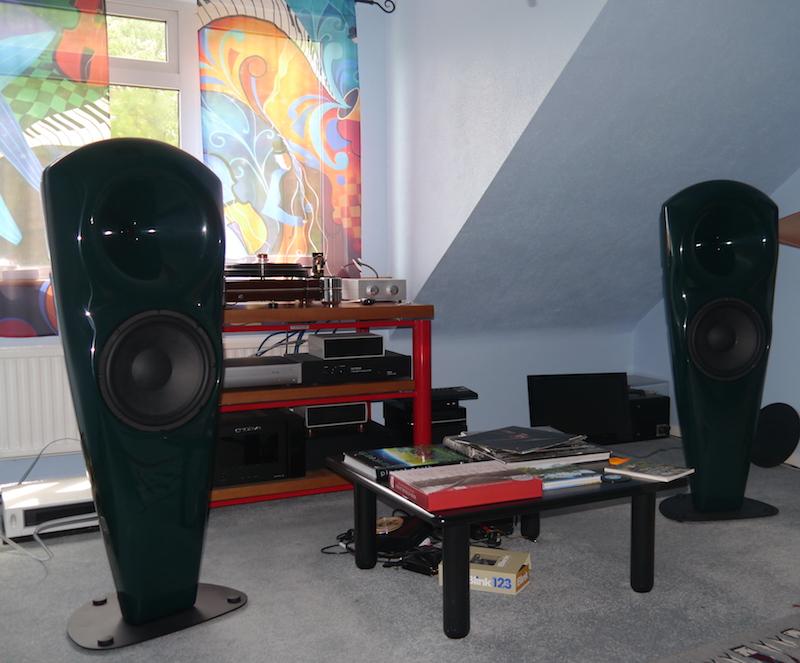 The Mummies really do allow the Cubies to show their full capabilities, the bass is deep and well controlled though not as deep as you might expect from a 12" woofer. The compression driver with horn really shows the high frequencies in detail, the Cubes and their EL84 valves really deliver the sweet high frequencies that you expect from these valves.

As the swan song with Cubes I fired up the Zontek turntable (review to follow) with the 14,5" arm and my Benz Micro Wood cartridge into my Whest PS30R phono stage. On went the Elton John "Blue Moves" album from 1976, my original copy from that year. This was a gripping listening experience, the Cubes were able to control the Mummies and deliver wonderful detail, great sound stage and real foot tapping rhythm.

You know when your system is working well, you just have to put on one more album. Out came Roberta Flack and the 1973 recording "Killing Me Softly", the title and opening track was a spine tingling experience. With the wonderful vocals from Roberta dead centre and the band laid out around and behind her. For some reason the kick drum is off to one side, even so the Cubes, again deliver the perfect timing.
I could go on listening to my music collection, but I must switch off as it is getting late!

The MySound Cubes are beautifully built, and give a real sense of pride when setup on your audio rack. They are different to the mass produced norm in many ways, they are valve amplifiers for the modern age. The Cubes are cool running for valve amplifiers, well, cool compared to my Leak amps, and very quiet.

There is no evidence of the valve rushing sound even when you place your ear close to the speakers. You do need a clean mains supply to optimise the Cubes, the Lampizator Silk filter really helps here. The Cubes also need efficient speakers with an easy load, something like the Mummies from hORNS.pl. Once setup correctly the results are beguiling, you relax, and just sit back and enjoy the music.