Readers unfamiliar with the NAD 3120 should read Lucio Caddedu's review of the NAD 3120 amplifier which is a well-deserved song of praise to this little classic!

Twenty years ago I bought a solid state Wharfedale receiver for everyday audio duties. Sometime in the 90s a loose speaker cable shorted and cut out one of the channels. Repair was uneconomic, so I went in search of a new everyday workhorse. The NAD C320 had been out for a year at the time and was winning all the awards in the mags, so I bought one. The price was right--just under £200--and it sounded... well, quite nice. The sound was big and clean and balanced, but a touch mechanical.

Around the same time, I came across the early TNT article on the legendary NAD 3020. This seemed to be describing a quite different sound, and one that I wanted to hear. I noted that there was an audiophile version and when one turned up in a regional hifi shop I bought it. This amp was by no means new, but it had been well cared for, came with the original box and manual, and sounded great. All for £70. I was told that this price was over the odds, but I knew I had bought myself a piece of audio history that I would be keeping.


The NAD 3120 is a modest but well-equipped amp. One of the reasons I bought it was that it had a good phono stage with MM and MC capability. Around that time I had acquired a Pink Triangle turntable with a slightly worn high-end MC cartridge thrown in (a Dynavector Ruby). I switched the phono stage over to MC and the NAD and the Dynavector made sweet music together. A crazy combination--the cartridge is very high quality and meant to be matched with high end phono stages, but the NAD phono stage made it sound exciting all the same.

I enjoyed the NAD, but began to wonder how much the electrolytics had deteriorated since it was new. If NAD had still been making the 3120 I would have swapped the C320 for it instantly, but of course they were not. Out in cyberspace there were reports of tweakers upgrading the innards of their 3020 and 3120s, but none offered a clear, step-by-step guide to someone like me who lacked electronics training or tweaker experience.

One particular site maintained by 'PeAK' intrigued me, but I did not, and still do not, possess enough electronics knowledge to do the upgrades described there myself. However, the site may offer an interesting alternative route to those with the necessary skills. Here is the link: PeAK


At last I asked for advice on our own tnt-audioaddicts group and was advised that I could replace the power caps without much difficulty. This proved true. The only problem was that I could not locate similarly-sized replacements. My new ones were too large. At last, I solved the problem by soldering extensions to the pins, cut from paper clips. I knew that these longer extensions could degrade the sound by introducing microphony, but I thought it would be interesting to hear what the amp would sound like with new power caps. The answer was, much better. So they stayed. Luckily no-one could see my handiwork inside the case!

Time went by and I moved onto other amps. Though the NAD 3120 has a specially enjoyable sound, it is certainly not perfect. Incidentally, I think that it sounds better than the 3020, but this may be because I never got round to replacing the power caps on the 3020 which I bought for comparison, and later sold.

A TNT-Audio reader wrote to me to say that he had bought a 3120 and was getting an engineer to upgrade it and I asked him to send me a report. (I'm still hoping to hear how that went...) Then, late in 2005, a new company came to the attention of TNT, Fidele Audio. Amongst other services, Peter Hickman, the owner-engineer offers upgrades to a number of classic models from two manufacturers who have made solid-state classics, Quad and NAD. Although the company website only mentions upgrades to the NAD 3020, Peter was more than willing to undertake an upgrade to my NAD 3120. As he would be working on my own amplifier, we agreed that I would pay for parts and postages to allow me to write an unbiased report on his upgrade. Here at TNT we greatly value our independence!

Peter turned out to be a great person to deal with. I posted the amp up to him in Scotland in the week before Christmas, hoping it would survive the standard parcel delivery service. It reached him in three days, just before Christmas, and was returned to me, well packed, very early in the New Year. 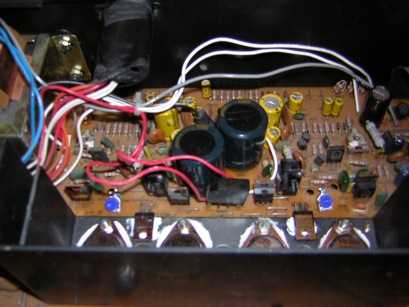 Despite the secure packing, there was a problem. One of the channels cut out intermittently. It was not the fault of the upgrade work itself, because the headphone sound was fine. I left it for a month, hoping to identify and fix the fault myself, but it persisted. Peter was very responsive to emails, and in early February I agreed to return it to him for diagnosis and repair. This he did very promptly and at his own expense, including postage. It turned out that its first journey through the pre-Christmas post had loosened some of the soldering where the headphone socket is joined to a small PCB via ribbon cable. Once this was spotted and repaired all was well. As this part of the circuit is not upgraded in any way, we agreed that this joint had been disturbed through handling. I was impressed by how quickly and thoroughly Peter resolved this problem.

The Upgrade Step by Step

Now to the heart of the matter: what does the service upgrade consist of and is it worth getting done?

First the two output power supply capacitors (if I recall correctly, 2 x 4400uF in the NAD 3120) are replaced by two 6800uF caps. This is the same job that I did myself. However Peter's replacements do fit neatly into the place of the originals! The increased capacitance and new quality of these caps provide an important upgrade. Quite simply, the bass is tighter and cleaner. Any hint of wooliness is gone.

While this upgrade can be done by anyone willing to handle a soldering iron with care, it is Peter's other work which is harder for the person without electronics knowledge. He next replaces all the electrolytic caps in the regulated power supply. By doubling the capacitance here, he aims to clean and tighten the sound still more. 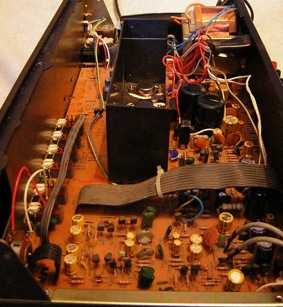 The sound is further improved by replacing all the electrolytic caps in the pre-amp and power amp circuits. He uses non-polarised caps for this to reduce distortion in the mid-range and high frequencies.

Next, he replaces the output transistors with more modern transitors chosen for their sonic qualities and power-handing and makes a small modification to the bias circuit to set the bias currents exactly. Finally, he fine-tunes the sound via small adjustments to the offset voltages and bias currents.

His website claims that the above mods 'improve the bass response and overall clarity of the sound, by reducing noise and distortion throughout the amplifier'.

Does the sound match these claims? Yes, the bass is improved, though I suspect that it is the power caps which make the most difference here. Overall, though, there is greater finesse. The charm of this amp is that although it does colour the sound (it is usually described as darker), it does not draw attention to this.

I began by running the amp just where I needed it, powering an internet radio feed into restored Wharfedale Diamond IIs. A 'classic retirement' home arrangement for old gear you might think. It sounded fine, but I soon discovered that the newly serviced NAD 3120 could handle much better sources and loudspeakers.

I did two other listening tests. The first was with the 'classic combination' illustrated above, playing into some old, but internally upgraded, KEF Concord IV speakers. I was immediately aware that it sounded more accurate than the NAD C320. Cassette tapes (remember them?) were enjoyable and rich, and CDs sounded fresh and lively. I was struck by the quality of the output from the NAD 524.

The second test was with more audiophile components, as listed below. Here I wondered how well the upgraded amp would drive the revealing, but not very sensitive, KEF 104s. The answer is, with ease! It clearly showed the differences between CD and vinyl. The recently upgraded Rotel 965BX showed its crisp clarity and the classic vinyl source sounded pretty good too. The overall character of the sound was gentle, delicate, even sweet. In comparison, the NAD C320 sounded bold and firm with a good grip on rhythm, but less musical. Given that the C320 and its successors are popular and highly-regarded amplifiers, I found that I had to check this for myself more than once. But it's true. While the C320 is a good solid amp, it sounds downright clunky compared with the upgraded 3120.

In describing the sound of the upgraded 3120 as sweet, I don't mean that it sounded unduly coloured. From another point of view it is a precision instrument that is very revealing. Harshly recorded CDs remain edgy and unpleasant to listen to, and vinyl surface noise is not hidden. Rather, the amp seems to handle the music accurately and with care. There is plenty of power, but no excessive punch.

To check the NAD's own phono stage, I compared it with my usual Gram Amp 2. The Gram was clearly revealed as better, but not vastly so. It produced a slightly sharper, drier sound. But the NAD's own MM output was fine, and I suspect better than many a separate budget add-on phono stage. With a new Project or a serviced Thorens, it would provide a fine route back into vinyl for those who have forgotten, or never experienced, this 'new audio dimension'.

Given that this upgrade is beyond the scope of the average hobbyist and is guaranteed by Peter's expertise, I would warmly recommend this to anyone who has one of these amps. As Peter's charge includes return postage, the service upgrade itself only costs £80, which is good value for the work involved. If you are in the market for a sub-£200 amplifier, or have an old 3020 or 3120 which has seen better days, this will get you an musical solid-state amplifier, with multiple inputs and a good phono-stage (with both MM and MC on the 3120) for not much more than the price of a budget phono stage. With this upgrade it's possible to go 'back to the future' and experience the glory days when the NAD 3020 and 3120 blew away all the opposition in the budget end of the hi-fi market--and moved the goalposts for everyone else.