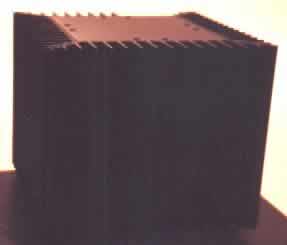 Nelson Pass is certainly one of the major technical figures in the international Hi-Fi community. He owns a large number of international patents like, for instance, the dynamic Class A. His most extreme products are well known to the DYI posse: who has never heard of the Zen power amp and its family (Bride of Zen, Son of Zen, Bride of the Son of Zen) had better inform himself.
During the seventies and eighties, he had people dreaming of his spectacular products, such as the Threshold: I still remember the Threshold preamplifier that was my dream for years, and it still is now, maybe unconsciously, my favorite model, thanks to its design simplicity and its very accurate board's aesthetic design.

Nowadays, Pass has created his own company, namely Pass Labs, that is producing his designs; it sports two series of products, a budget oriented one (in a manner of speaking...), the Aleph presently being tested, and a very high cost one with absolutely threatening power.

Unfortunately, Pass gave up the Aleph range at the beginning of 2000 - yet Aleph components obviously can be found in the second-hand market at decisely attractive prices. OTOH, although I already knew their production had ceased, when I was told I would probably be given this stuff to test, I didn't think, even for a minute, that I would refuse...

You know it's something out of the ordinary when you move it - its weight of more then 15 Kg is a clear introduction. The cabinet is made of pieces of dark brushed and anodized aluminum, with a thickness variable between 6 and 12 mm.

Aesthetics are midway between finesse and spartan (there's something of a rocky-monolithic-cubic appearance), yet pleasant and well finished in the smallest details - and the blue LEDs are gorgeous.

Its controls are absolutely audiophile-grade: few and strange. There is an input selector, a volume knob (master level) controlling the output level (I mean that the attenuator is at the pre's output, not at its input as usual) of both channels, and also a separate gain control (level) for each channel.

Input selector and volume control sport endless rotary commands controlling digital encoders and, via the control logic, some relays - in particular, the volume is made with relay-controlled attenuators offering 256 different attenuation steps.
The attenuator's (and, so, the pre's) output impedance is decisely reduced, less than 1Kohm. It's worth noting that the preamplifier is accredited to drive any load. The gain controls are made with pots that directly drive the FET-stage's gain (probably simply by modifying their polarization). The rule should be to select the minimum gain and the maximum volume allowed, but actually with other combinations you can slightly modify the timbrics.

The preamplifier is absolutely neutral, with a perfectly homogeneous behavior at all frequencies - you can't hear any minimum coloration. It is really difficult finding anything else to say.

The general color is very clear, solar, the sound is full, round, firm. The bass is very good, maybe not as violent as in other solid state stuff, but, for me, it's really perfect. Mids are very correct, voices are very present. Highs are decisively all there, without any cutoff or sweetening - absolutely neutral. Macro- and micro- dynamics are decisively good.

Precision and detail are really remarkable, simply amazing; instruments are defined (maybe I'd better say carved, or, even better, printed, given their level of detail) into the soundstage with incredible precision, marble stability, and exceptional clarity.

It really has measurement-device precision; the space between each instrument becomes huge, empty - even in the most complex movements you can very easily follow each orchestral element. It is really incredible, and, at the beginning, quite disorienting, since the ear, not accustomed to such precision, chases this sound or the other, losing the whole figure.

Here, too, the component's weight (reviewer's plague) is not usual - 27 Kg for each unit. If you then consider that the double packaging led to handle an almost 60 cm-sided cube, you can imagine how easy carrying the beasts around is...

The look is decisely unconventional, but, for me, very beautiful - each monoblock looks like a cube, with its lateral sides made with heatsinks, and the top made with a thick anodized and brushed (like the pre) aluminum piece.

On the rear side, in an unfinned area, are placed the inputs (duplicated RCA and XLR), and the doubled output binding posts that, in my opinion, are a bit too close to allow an easy use; moreover, there are the power fuse and the on/off switch.

Each monoblock is rated for a power output of 100W into 8 ohms and 200W into 4 ohms, surely enough for any domestic use. The nominal damping factor is an excellent 100. Each monoblock's power consumption is 300W, which can be rather problematic...

The power amp, too, is absolutely neutral, no colouration can be perceived. The general colour is very clear, solar, the sound is full, round, stable, and deep. The bass is very good, maybe promoting articulation and detail to raw violence, but for my tastes I cannot imagine anything better. Such are neutrality, naturality, and precision that you are led to forget about the amplifier, to undervalue it, but as soon as you listen back to another one, you realize how superior this one really is.

Macro- and micro- dynamics are really good, you cannot perceive any kind of compression, even with difficult signals and high listening levels. I never heard it even slightly lose its calm. The bass control is excellent.

Its strong points are flow, transparency, and detail - the former are incredible, high-level, tube-gear like, truly exceptional. The detail is absolutely perfect, holographic, and, at the same time, serving the preamplifier, reproducing its sound without altering it.

This way the amplifier completely dissappears, it becomes only, according to theory's expectations, a pre's trusty slave, without superimposing any specific imprinting on the sound.

So, both monoblocks can fully reproduce both the image depth and three-D effect (the feeling of being able to walk around the soloist) usually found in single-ended tube stuff, and the precision and timbric correctness sported by the best solid state preamplifiers.

Effectively, I feel it's pretty strange to see such characteristics married to a sonority that, while being vaguely tube-like, has mostly a heritage of the positive aspects of solid state, plus that something, so difficult to individuate, that always distinguish a solid state gear from a valved one - I'd be tempted to call it grain, but I'd be wrong, because we can't hear any grain here, and the sound watermark is perfect, even female voices are rendered with excellent homogeneity and flow, that can be compared to those coming from a tube gear - yet, distinct from it, in some ways. Maybe the definitive difference is in the control and the precision, both better than what can be found in the classic tube world.

An excellent couple, for their lucky owner a warranty of a sound coupling together many of the best solid state characteristics, with the tubed ones, whose defects are much avoided.

What more do you want? Ah, you're saying that you'd like them to be cheaper? Don't you think you are really asking too much?

For the more techno-freaks, lots of tech info can be found on the Pass Labs web site. Anyway, it is worth a visit from all of you.