Funny brand, Marantz. A bit schizofrenic, as befits an American-born Japanese daughter of a Dutch multinational with a lot of foundation in Belgium. On the one hand, and often oblivious to the US market, Marantz make such unashamed - and darn good - super high-end products as there are the legendary CD-12 two-box CD, the Project T-1 tube amp, and the cute yet so desirable Music Line series of small-size affordable esoterica. On the other hand they splash out - just as unashamedly - budget electronics with a decidedly commercial sound and with the obligate designer label, such as the CD-67SE and PM-66KI.
And in the middle they have a line that merges both worlds, resulting in products like the wonderful PM-17, an integrated amplifier that I find about the most desirable I've ever encountered (and a hot tip for all ya Krell KAV-300i wannahaves!)

Almost a decade ago, Marantz had two excellent components that represented then somewhat of a milestone in affordable audio luxury. One was the CD-80, a big and heavy ECU1000 CD-player that brought the best sound Philips' old 16-bit technology could offer, designed by a then-obscure Belgo-Japanese, a certain Ken Ishiwata. The other was the PM-80, at ECU900 or so, a matching 100W class AB integrated amp that could be switched to pure class A output, in which case it delivered 20 of the finest sounding little Watts one could get for the money.
Alas, the mighty CD-80 was discontinued long time ago. But the PM-80 has been with us ever since. First as the PM-82, with remote control, then a PM-80 MkII, a PM-80SE, and finally a super-duper version, the PM-90SE. And now, now we have the PM-78 which allegedly continues the bloodline. At only ECU500...

What does it offer?

Quite a lot: In class AB, 95W per channel into 8Ohms, increasing nicely to 155W/4Ohms, a fall-back of only 2dB relative to the ideal of 190W/4Ohms, so expect this animal to behave quite potently. Switched to class A, the output is 25W into 8Ohms. No figure into lower loads is given, but I'd expect that the power doubles cleanly into 4Ohms. OK, what more? Remote control. Record out selector. Four line inputs, phono MM input - MC sadly being omitted and this while most of the mid/upmarket cartridges sold are MC so better stick to a Goldring 1042 and be happy end of sermon - two complete tape circuits with monitoring and bidirectional copying, a processor loop, tone controls (very effective when watching overspiced movies through your stereo, a treble cut of -5dB at 10kHz going a long way to mimicking THX-reequalization), tone defeats (for watching - pardon - listening to music), gold plated input sockets, and simple binding posts - accepting either a bit of bare wire or banana plugs - for four speakers. It doesn't share the PM-17's massive build quality, but what do you expect when all of this can be yours for a meagre ECU500*? You know, ten years ago I paid ECU400 for a Cyrus One: no facilities, no remote control, and 30W of what-the-mags-called-audiophile-quality (but which wasn't). Add in the inflation, and the '78 comes out as a bargain. If it delivers sonically, of course...

Aesthetically the PM-78 is a run-of-the-mill Japanese midprice amplifier. This to say that it looks boring. It is a gigantically big black box (why-why-why when Cyrus, Quad, Audio Analogue manage small and beautiful boxes with great sound???) with a flat and bland metal front panel, only adorned with a few unimaginative knobs'n'lights. Luckily the build quality is OK, and the Marantz sure is darn heavy with its 12kg on the scales!

* What's that 'ECU' business? Well, to make pricing easier and less sensitive to fluctuations, I switched over to the European Currency Unit, or its soon-to-be consumer version, the Euro. It has the additional advantage that its value is roughly equivalent to the US$, all for the world citizen's comfort!.


The secrets of inner space 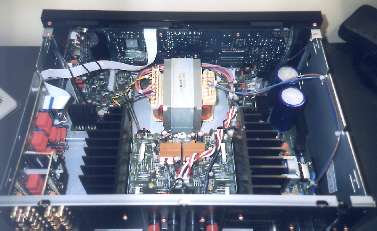 The internals look bog-standard, like you encounter in all mainstream Japanese amps whether they cost ECU200 or ECU2000. There are a lot of separate circuit boards, often with functions not even I can fathom (in my dictionary amplifiers are simple circuits), and for instance the all-important layout of the ground tracks looks as if it has been routed by someone from Cnossos. The only items of hope are a big power supply with blue Elna-for-Audio reservoir capacitors, and a surprisingly compact and neat power amp section. This final stage uses just one HDAM - Marantz' discrete opamp circuit in a copper box - per channel for voltage gain, followed by the driver and power transistors. This is the same (successful) architecture as seen in the PM-16, 17, and 66. The power amp is fed from a chaotic board crammed with cohorts of cheap opamps, the tone control board. Luckily this one can be bypassed via the Source Direct switch, so that our precious music only has to run through the relay-switched input selection boards and the motor-controlled volume attenuator pot. The MM-only phonostage uses a discrete transistor front-end, followed by a reasonable-quality JRC 2114 dual opamp, the same opamp as used in Marantz' up-market CD-players, and also in the TEAC VRDS-10 and so on. A version that only runs in class AB is also available, tagged the PM-68, costing the price of a good MM cartridge less :-)

How then does it perform?

And then the listening began. Using class A mode, I only needed two tracks, one from Dead Can Dance, one from Mary Black, to characterise this Marantz. It sounded sweet, but also rather slow and with a plodding bass that made the music sound, well, just boring. Directly compared to my faithful Quad 34/306 pair there was less focus all-over, and the several layers of sound in the music could not be distinguished very well: about all things going on in the background, these things that can turn music-reproduction into music, seemed to be unhearable! Instruments that formerly had their very own character in the soundscape, like Lisa Gerrard's yang ch'in, were now reduced to Xerox copies at best. It also worked as an equalizer, making all source material sound alike. Players' virtuosity was diminished (which in the case of Ruben Gonzalez playing the piano is a crime), while their mistakes and lack of skill was glossed of (nevertheless the PM-78 could not change my girlfriend's rather explicit opinion on MF's AM as a clarinettist), whereas with my Quads we often can perceive the music's emotions even when listening from the kitchen!

Now don't get me wrong: the PM-78 wasn't exactly sounding bad, me knowing much more expensive amplifiers having done far worse on my difficult old Quad ESL speakers, but it was as if the musicians didn't feel like playing, and we certainly didn't feel like listening!

But we had to go on, and endure. Luckily there were some good things to say, too. The Marantz sounded fairly neutral, never ever harsh or bright, with only sometimes a strange artificial edge around voices (which, incidentally, reminded me of the CD-67SE CD-player). The size of the sound stage was just as large as with my regular amplification, only now more blurred, in soft-focus, and far less open. And even with the puny 25W of class A, the Marantz always sounded controlled, as if going louder would never be a problem. Switching to class AB yielded almost no differences, perhaps a bit less wide staging, perhaps a mite less open and detailed. But comparison was difficult as I obeyed fairly long waiting times between switching, so that the output stages could properly get accustomed to their new operating conditions.

If you think I was rather disappointed by now then you are right. So far the Marantz hadn't done any single thing beyond being a rather uninspiring standard Japanese mid-class amplifier. Innocuous, yes. But also boring. I decided on the spot that my next review project would be a Naim. That's how I felt.
Moreover, I was going to slam a product. A product that already was approved of by people whose ears I trust. A product with a darn pedigree. You know, someone once told me that the old PM-80 sounded "almost like a Krell" when used with the Martin Logan Aerius speakers. And now this happens... Such things never make me happy. But I wasn't finished yet... 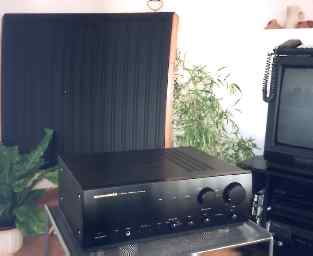 For the assessment of the phonostage I intended to use my 0.5mV MC cartridge directly into the MM- input, hoping that this would work out properly. Sometimes it does, really. Well, this time it didn't. There was not sufficient gain. Let's just say that I got the idea that the phono preamp seems quite allright, being neutral and without any obvious vices.
And so I went back to the bulging equipment racks to disconnect the turntable. But hey, what's that there? Shouldn't that Source Direct button be ON instead of OFF???

I had been listening all the time with the dreaded tone control crap board in-circuit!!! Me, the most supreme hifi expert in small stupid Belgium!!!!!!

OK, so I swallowed my pride, pushed that button, and started all over again. And I regret that I did this (just joking): now the PM-78 bettered my Quads. Maybe just by a whisker, but it bettered them. Now the bass was deeper and at least as controlled as the reference, while the midrange was most certainly a bit more refined and detailed, which was easily heard on e.g. second voices and choruses on the Mary Black CD. Staging was as good as the Quads, and treble was only a little bit brighter. For the first time now I felt like listening to the music, the whole CD long, rather than just taking snatches, zapping from track A to track B and then to track X, wanting to be somewhere else.

So good now was the marriage with the electrostatics that I refrained from firing up my pair of conventional speakers, Rogers LS-1s, which I recently acquired for amplifier/speaker compatibility testing. No, I think the PM-78 can drive just about anything, and I can imagine it would mate wonderfully with for instance the small Magnepan speakers, if you're in for some budget esoterica. If you're in the States and you read this, then consider how much joy can possibly be had with this $500 amp and the $500 MMGs!! I say "possibly", because actually testing the PM-78 with my own Magnepans-in-storage would have stretched our logistics a bit too much...

I must consider the Marantz PM-78 quite a success: it sounds pretty wonderful with source direct engaged and pretty crappy when that condition isn't met, it doesn't cost a lot of money, and yet it offers a mass of features to boot! More, if you're not interested in the utmost transparency, then the almost-equal but classless PM-68, at ECU400, may even be a better buy.

Still, for the sake of hifi pride Marantz should make a simpler version of this amp, a 25W class A or perhaps 50W class AB, without tone controls and remote control, without phono stage, perhaps even without switching relays. But housed in a much smaller and sexier-looking casing. They should name it 'PM-18' or somesuchthing. They should sell it at ECU400 and keep it in their program for a year or ten. It would be a killer.