One for all, and all for one! 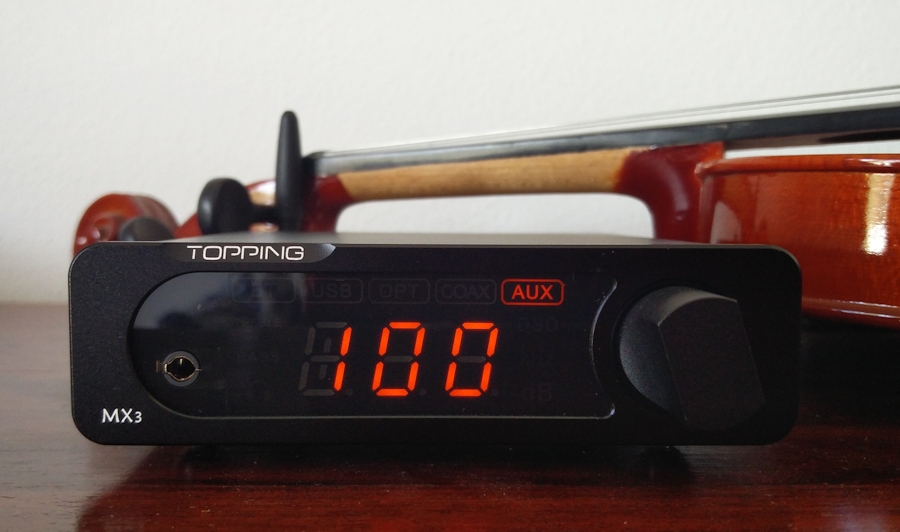 I have already reviewed the Topping PA3 Class D integrated amp, so I refer you to that article for a general introduction on Topping and the main features of the power chipset that is used on both amps. What are the main differences between the PA3 and this MX3 under review? Well, to cut a long story short, take a PA3, decrease its power output by using a lower voltage PSU and add a headphone output, a complete display, a subwoofer output, a remote and a DAC which is capable of managing coaxial, optical, USB and even Bluetooth digital signals. That's the MX3! A far more complete component that can be the heart of a minimalist HiFi system, for just 140€. If the PA3 was an insane bargain, this should be a steal! Let's see.

The MX3 is a tiny Class D integrated amp, with just one line input, based on the Texas Instruments TDA7498E chipset. Unlike in the PA3, this time the chipset is fed with a 24V/3.75A power supply and this lowers the max power output down to 40 watt per channel into 4 ohm and something like 35 watt on a 8 ohm load. The built-in headphone amp is rated for 257mW at 32 ohms and just 42mW at 300 ohms, by using a Texas Instruments LMH6643 chipset. The onboard DAC uses a Texas Instruments PCM5102A chipset for 24/192 operation on all inputs and 24/96 on USB input. The same chipset has been used on good CD players like the Denon DCD-1520AE, Denon DCD520AE, Rotel CD11, Luxman D380, Teac PD-H01 and many others. This DAC could manage sample rates as high as 384kHz, but the receiver which has been used inside the MX3 (a Cirrus CS8416) can handle just 192 kHz sample rates.

If all of this doesn't seem enough, add a complete remote and even bass/treble controls. And NFC (Near Field Communication), that is...just put your Bluetooth device close (< 10 cm) to the MX3 and it will be associated automatically. Cool.

As in the PA3, the nicely finished aluminium cabinet has rounded edges and no screws in the front fascia. It is available both in silver and black. It measures just 17 x 12 x 3.7 cm (WxDxH).
If you need to explore more detailed tech specs, have a look at the official website. 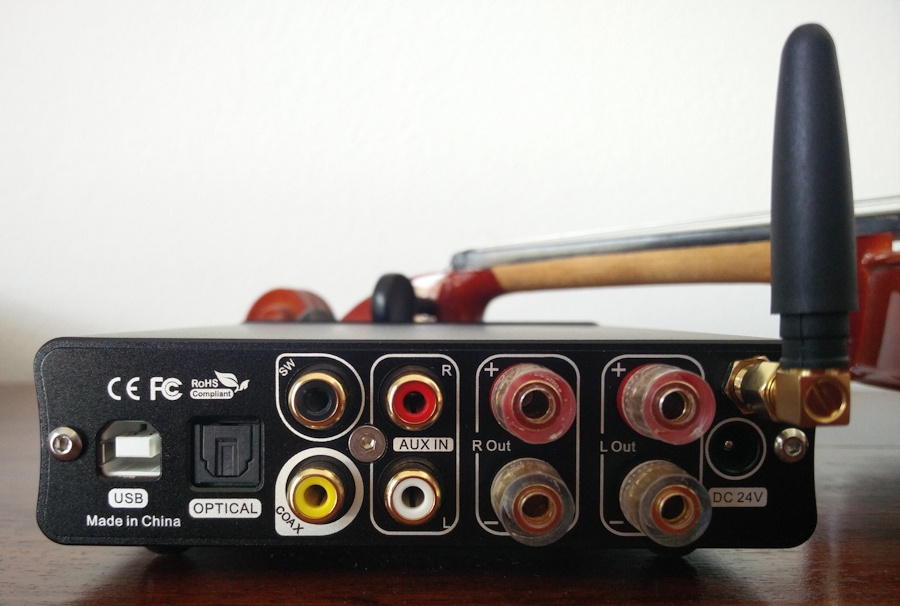 One for all, and all for one!

The listening session has been performed putting the MX3 directly against the PA3, so this is mainly a comparison test. For this reason I suggest you to read the listening notes of the PA3 first, in case you've missed them.

First, my expectations were high. I was hoping that, considering these two amps use the same Class D chipset, the MX3 sound was more or less that of the PA3, just with a lower power output. Unfortunately, my hopes crashed right after the first notes. Yes, the tonal balance is mostly the same, hence generally neutral, with a dry note in the mid and high range, but everything else is definitely worse. And it is not a problem of pure power, because the differences are evident even at low listening levels. Don't ask me why, but I suspect the key role is played by the PSU. The sound is less dynamic, definitely slower on attacks and decays, more compressed, while the bass range is weaker and with less impact and extension in the first octave.

Moreover, while the sound of the PA3 is generally tight and fast, the MX3 is mostly relaxed. The PRaT (Pace, Rhythm and Timing) factor is definitely worse. With highly dynamic tracks the difference is embarassing, to say the least. With acoustic music or simple tracks with few instruments, things get better, but the feeling is that the MX3 runs out of steam quite easily, which is not normal considering the 40 watt per channel power output. It does sound loud if required, so the watts are really “there” where they should be, but it seems these are delivered in a lazy way.

The lack of harmonic content makes many instruments sound the same and, again, the comparison with the PA3 is embarassing. Even the soundstage is narrower, while the depth of the stage is limited. There's some depth, but the PA3 performs better.

The headphone output (which is lacking in the PA3) sounds very good with low impedance headphones. It can play very loud, tight and dynamic. High impedance headphones might need some extra power output, though. The DAC section can handle 24/192 tracks and sounds quite good, but it is impossible to judge DAC performance alone as there's no analog line output. These add-ons should be highly considered when judging the Q/P ratio of this MX3.

Actually, reading the listening notes, you might think the MX3 is a complete disaster. Not so. If you listen to it without a direct comparison with the PA3, it is enjoyable, a gentle performer that can get the job done, certainly not giving you goosebumps, but still sounding correct.

The main point you should have in mind is: this amp, costing just 20€ more than the PA3, has much, much more to offer: a decently sounding DAC (with coax/opt/USB & Bluetooth, even NFC), a complete remote control, a good sounding headphone output, a subwoofer line output and even tone controls that can help with budget loudspeakers. The PA3 sounds better, yes, but it is a pure and simple integrated amplifier with just two line inputs. No DAC, no BT, no headphone output, no tone controls and, what's worse, not even a remote! The PA3 is an insanely good bargain, considering its stellar sound/price ratio, but I'd still consider the MX3 a steal, as it is hard to find such a complete “package” with a reasonably good sound for just 140€.

Manufacturing & finish.
More or less the same things I wrote in the review of the PA3 can be recycled here, except the complaint about the lack of BT connectivity. On the MX3 you have everything you might need and you can connect almost every digital device you can think of. There is just a single line (AUX) input so using simultaneously a CD player and a turntable (with phono preamp) might be a problem, unless you decide to connect the CD player via its coaxial or optical output.
Sound.
Tonally similar to the PA3, it fails to reach the same performance level. It sounds slower, lazier and dynamically compressed when compared to the more powerful brother. 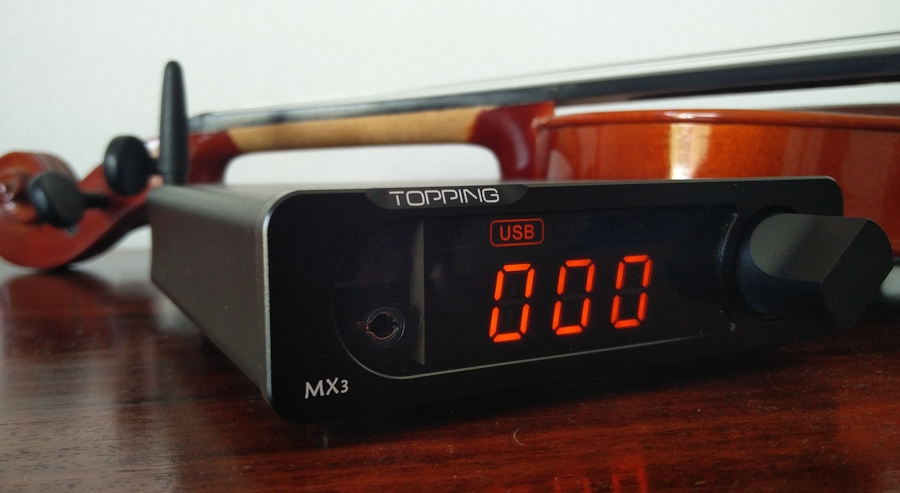 It is a small and light component, so heavy or stiff cables might be a trouble. Do not try to use a more powerful PSU, hoping to get the same power output or sound of the PA3 amplifier. It won't work, as voltage is different and internal circuits will evaporate. High impedance headphones might be a trouble, as well, because of the low power output of the headphone amp section. Low impedance headphones are the way to go.

This comparison test teaches us an important lesson: do not judge amplifiers on the chipset they use! These two amps use the very same Class D chipset, the main difference being the PSU and, perhaps, small differences in the passive components that surround the chipset, but the final result is vastly different, and NOT because the power output is different. Globally, the Topping MX3 is a do-it-all component that costs almost nothing and performs well in many areas. Yes, the PA3 sounds much better, but if you're searching for a nicely designed and built component that can be the heart of a budget system, take the MX3 into serious consideration, as it will be hard to find something this “complete” for the same money.