Almost everything for almost nothing 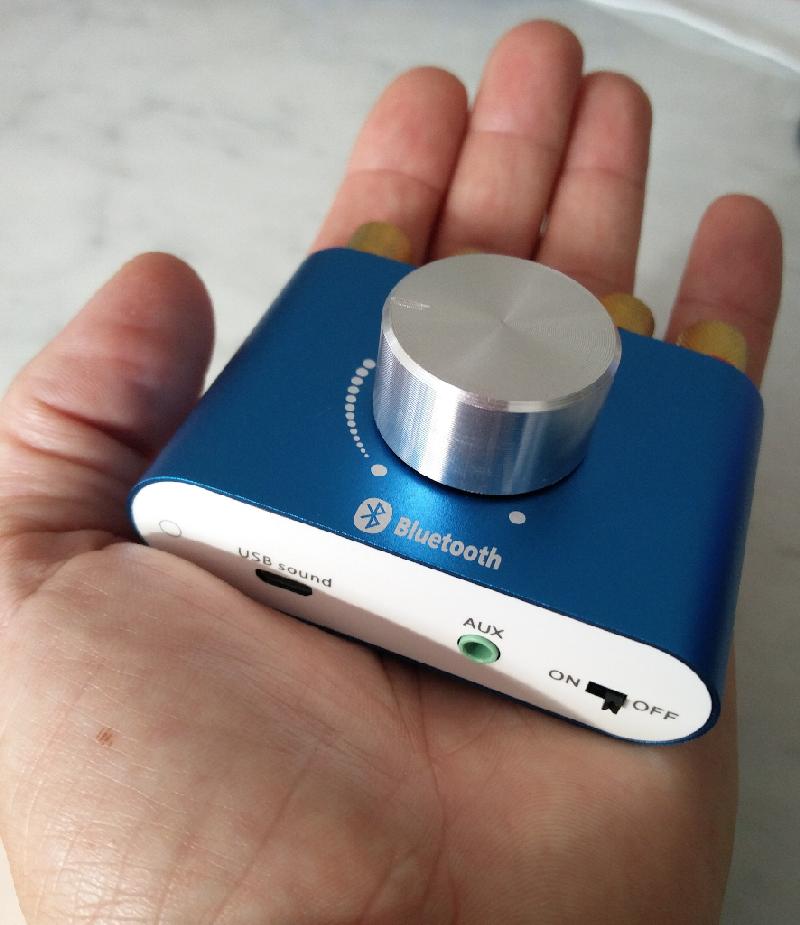 After the shocking success of the T-Amp, almost 15 years ago (!!!) we have tested many other chip-based inexpensive amplifiers. They all lacked something, be it sufficient output power, reasonable number of inputs, adequate binding posts and so on. For this reason I've been looking for something that could address and eventually solve all these issues, hopefully at a ridiculously low price. And here it is at last! An integrated amplifier that offers high power output (from a TPA3116 Texas Instrument Class D chipset), nice binding posts, line and Bluetooth inputs and, hear hear, even a built-in DAC for USB connection!

This small miracle is marketed under many different brands: Nobsound NG-01, Douk Audio F900, Mogu F900, Pastop F900 and a couple of others. Nobsound claim theirs is the one and only F900S. Actually, they all look the same and ARE the same. Pics of the inside of these amps reveal the truth. Moreover, there's F900S printed on the board!

These amps are sometimes sold in bundle with a 12 volts external PSU that, as we'll see, is largely inadequate. It is better to purchase one of these amps WITHOUT PSU. They can be found, for example, on Aliexpress, for 15$ or so, depending on offers. For this silly money you get the amp, a mini-jack/mini-jack cable with a red sexy sleeve, sometimes a minijack/RCA interconnect and the owner's manual. 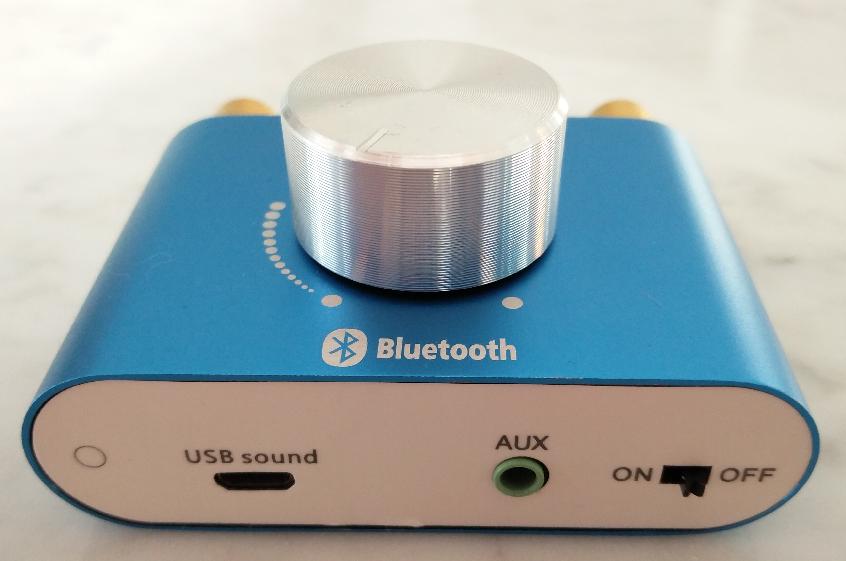 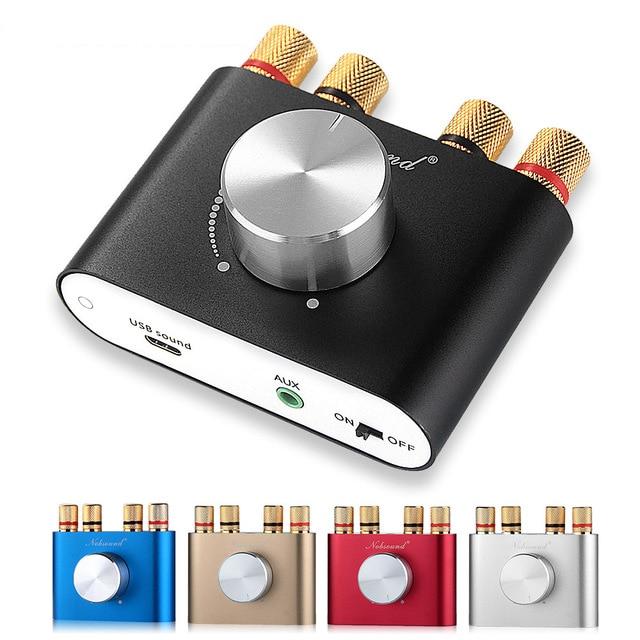 These amplifiers are based on the Texas Instruments TPA3116 Class D chipset which has quickly earned almost legendary reputation in audiophile circles. It has been used on many commercial amplifiers, such as the Breeze Audio 3116, the amazingly cool Loxjie A10 and the Fozi Audio TPA3116. Moreover, it is easily found on many DIY kits such as the Fleawatt Steampunk. SOmetimes it is used in dual configuration boards for more power.

This device can work with different voltages, ranging from 9 to 24 volt (DC). Of course, output power depends directly on the input PSU voltage. To get the highest power output one should use a 24 volt PSU, with at least 3A of current (better if higher). I used a 24V/5A without problems and getting the best results. For this reason these amps shouldn't be purchased with the PSU which is normally supplied, as this is - normally - a 12 volt one. A 24V/5A external PSU can be purchased for 15/20$ or so. You can even use a notebook external PSU with the same electrical characteristics. With such a PSU the TPA3116 is capable of delivering more than 30 watts on a 8 ohm load and nearly 50 watt on a 4 ohm load.

Inside, you will find two GSK 25 volt 1000uF power supply caps and two chipsets that manage the USB data flow and D/A conversion.

This integrated amplifier offers a mini-jack line input, a Bluetooth input, and a USB input. I don't think you could ask for more. Speakers can be connected via the gold-plated beefy binding posts that accept bananas, forks and even thick bare wire. A sliding on/off switch and a standard volume control complete the package. The outer shell seems made out of anodized aluminium, and is available in many different colors. If the original T-Amp was small, this is much, much smaller.

At power on there's a quite annoying female voice that tells you which input has been selected. This feature can't be deleted. 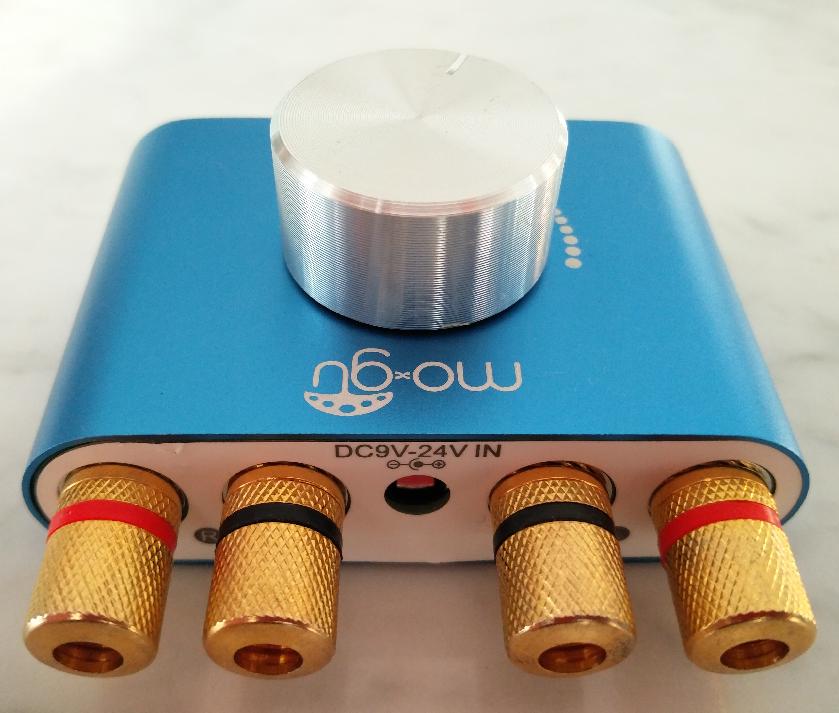 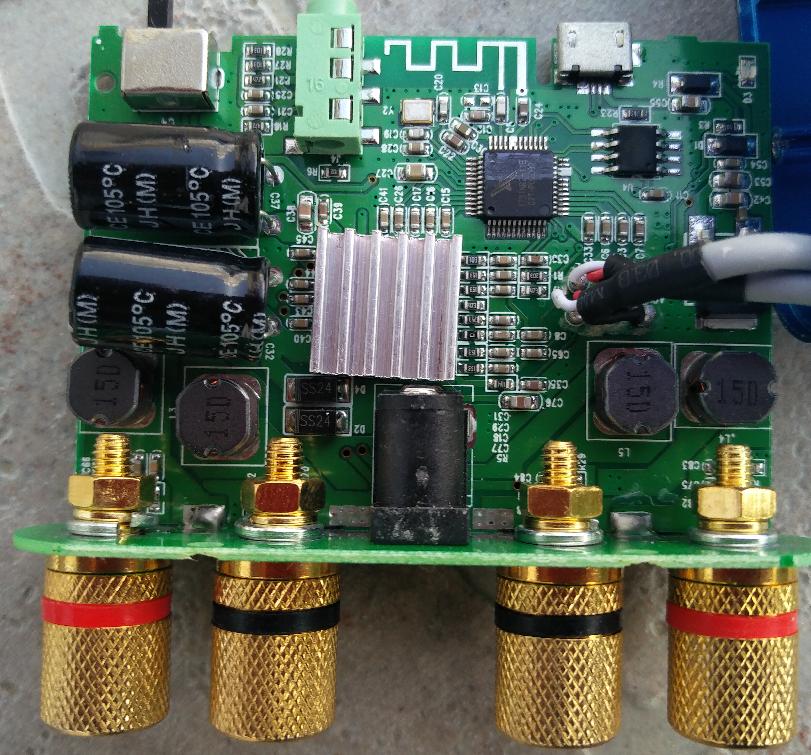 Almost everything for almost nothing

My listening notes refer to the line level input and to a 24V/5A PSU, as this is the best sounding combination. I've also tested smaller PSUs and the Bluetooth/USB inputs.

First and foremost, the power output is amazing. If you are familiar with the 9 watts of the original T-Amp, well, you'll be shocked. This small amplifier is as powerful as a Tripath TK2050-based amp such as the Dayton DTA100/120, which has been used (with the very same power supply!) as a sparring partner, along with similar competitors.

This amplifier - dare I say it - delivers a true HiFi sound, with a complete frequency response, from the deepest bass to the audibility threshold of the human hear. And this is the first surprise. Then, the bass range is powerful and articulated, just a bit lightweight, especially when heavy loads (at the speakers end) are connected. Perhaps the two 1000uF PSU caps are undersized for the task. A beefier energy reservoir would have given better bass, in my opinion. Overall, the tonal balance seems to favor the mid-high range, but since this is clean and easy on the ears, it is not an unpleasant effect. The high range is complete and well extended, though it lacks the harmonic richness of other class D amplifers. For example, the Dayton performs better in this area, though also being slightly warmer and smoother.

Overall, the sound appears to be clean and detailed, sometimes a bit clinical, but still mostly neutral. The level of distortion is very low, considering the price of this amplifier. Voices appear clean and undistorted, though a bit dry and cold.

It has enough power output to drive even low sensitivity speakers, and the dynamic performance is convincingly good. The slam in the bass isn't on a par with the Dayton DTA100/120 but without a direct comparison you won't find its performance poor, by any means. Even the soundstage it is able to create is rather good, though not as large and deep as with the Dayton. The focus of the image is stable, but the whole stage is smaller than it should be. At this price it shouldn't be even mentioned as a fault, but I'm here to tell you everything, the good, the bad and the ugly. 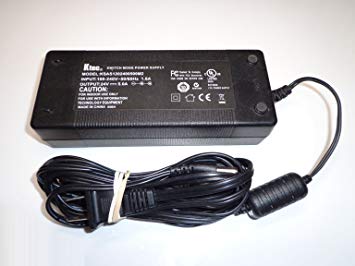 For the price, it is ridiculous to try to complain of anything. Anyway: there's no headphones output, and the line input requires a mini-jack/RCA adapter or mini-jack/RCA cable. A good 24 volt PSU isn't supplied with the amp and should be purchased separately. The female voice that announces which input has been selected is pretty annoying.
It s a very light component, even the slimmest speakers cable will make it flip upside down :-)
Soundwise, it is almost too good to be true, even though bass slam and power could be better. Harmonic richness could also be better, in order to reproduce musical timbre more accurately and naturally.

The TPA3116 chipset can be powered even with 26 volt power supplies, but this F900S won't tolerate such a high voltage, because the power supply caps are rated for just 25 volts. For this reason I recommend you to use 24 volt as a maximum. As for tweaking: there's some room to experiment: better PSU caps, for example, should be the place to start. The web has plenty of forum discussions on how to properly tune a TPA3116 board, though.

The lowest prices can be found on Aliexpress, but even Amazon, from time to time, has nice offers on these amps. It is even easy to find on Ebay. When ordering from Aliexpress do not forget it may take 30-40 days to be delivered to your door.

A tiny magic box that does almost everything for almost nothing. Honestly, I can't ask for more. This amp is the place to start for building a good sounding, minimalist and extremely inexpensive HiFi system. Just add two speakers and any source (a PC, a smartphone, a tablet) and you'll be done. HiFi has never been so good and affordable. More than a bargain!