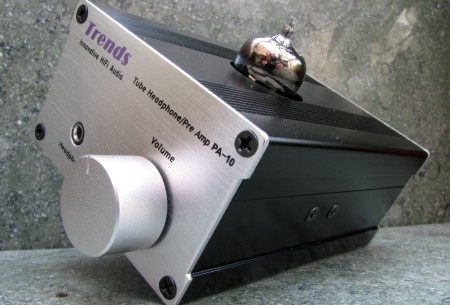 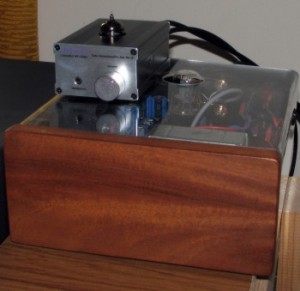 I recently reviewed the TubePre, a tube-based pre amplifier module from Audiodigit. I was suitably impressed with what that did when connected to the 'right' amplifier, 'right' being typically a chip amp, or one of the 12 volt class-T amps. The Trends Audio PA-10 is a similar item, but instead of coming as a DIY module, it is supplied as a finished plug-and-play item. As you can see from the picture, it also differs from the Audiodigit pre in terms of its size, as well as working as a headphone amplifier. There are two pairs of input RCA sockets. The one marked PHONO, is not a phono input stage, i.e. if you use a turntable then you will still need a RIAA phono stage, but it does offer higher gain which is useful if the phono stage has a typically lower output level than something like a CD or DAC. In fact the gain using the PHONO input is 20, with the CD input providing a gain of 3 that will be plenty for a CDP, most DAC's (including USB DAC's), and items like the Logitech SB3/Transporter.

The PA-10 comes in a standard version and in an 'SE' version. I was sent the 'SE' version for this review but I also reviewed it using the valve that is supplied with the standard version. Apart from the valve, the only other change to the 'SE' is the upgrading of the output capacitors. I'll start by describing the performance when using the 6N11 valve, i.e. standard, and then with the 6H23n installed.

For a tube pre amp, the PA-10 is minute! Measuring just 75mm x 110mm x 45mm, it is able to achieve such as compact size by using an external (wall-wart) power supply, although that is very small too. The power supply for the PA-10 is 24 volts and you could substitute a pair of 24 volt batteries, or another 24v supply of your choice. The bundled PSU works well enough though and is claimed to offer "extra low ripple and noise". I like external power supplies because they do make it easy to upgrade if you want to.

It's clear, looking at the other audio products in the TrendsAudio catalogue, that the PA-10 has been carefully designed to match their UD-10 USB DAC, and TA-10 class-T amp. To achieve such a small case, it was necessary to have the miniature valve protrude through the lid of the case, but hey, isn't that what these things are for, showing them off? As with their other products, the internals are neatly laid out, and they need to be with so much crammed into such a small space! One obvious advantage of such a compact product is that the signal path is kept about as short as it possibly can be. The case is aluminium and offers excellent shielding against the dreaded RFI, keeping the PA-10 free of unwanted noise. 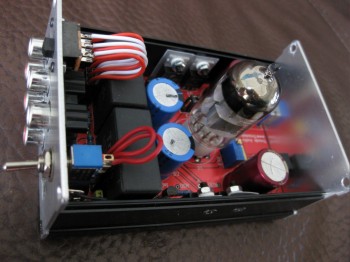 So what's inside this little box of tricks? Well, the valve supplied with the standard version of the PA-10 is the 6N11 although it can also use both 6DJ8/6922 series and 12AU7 series valves by simply switching the jumpers on the PCB. It's really not difficult for anybody to swap valves if they so wish. Four screws release the lid of the case, then the valve can be swapped over easily, and (if necessary) the jumpers can be changed. The DC bias will probably need adjusting for optimum performance so the tools required would be a Philips screwdriver, a pair of needle-nosed pliers, a tiny flat screwdriver (to adjust the blue trimmers), and a multimeter for setting the DC bias accurately. By the way, the PA-10 is not purely a valve circuit! It is actually a hybrid pre amp using TWO MOSFETs (per channel) as the output drivers and all this works in class-A.

Also in the picture you can see the power switch, and the input selector switch on the rear of the case. The points where you measure the voltage when adjusting the DC bias are easily accessible, and with only +/-24 volts inside the case, there is no danger of electric shock, even for a novice.

Adjusting the bias is quite straight-forward! You remove the lid of the case by removing the four screws that connect it to the front and rear panels. With the lid off, you will be able to see two vias (plated holes that go through a PCB) marked as A(L) and A(R). You place the red probe of your multimeter on one of these vias and the black probe on one of the phono sockets (outer part). Set your meter to the 20 volt setting and turn it on. You want to aim for a reading of 16.5 volts and you simply adjust the blue trimmer (R3 or R13 depending on which polarity you are adjusting) until you do have 16.5 volts. Please don't be put off by this, it only takes a minute or two and is far easier to do than explain. Trends Audio supply full and clear instructions in the form of a PDF document.

After adjusting the DC bias on the review sample, I connected it into the same system that I initially used to review the Audiodigit TubePre, ie a Logitech SBS, Monica3 DAC, and Monrio MJ class-D amplifier. I set the volume control on the PA-10 to max, and relied on the volume control in the MJ amplifier. The results were very similar to using the TubePre, ie the performance of the MJ amplifier was quite transformed from a rather 'grey' and lack-lustre presentation to something that was most enjoyable to listen to. There is no sign of hum nor hiss with the PA-10, and I didn't find it too 'warm' sounding. Clarity was good, timing spot on, sound stage was large and imaging accurate. I set up the system so that I could use both the PA-10 and TubePre and select one of them using the input selector on the MJ amplifier. I have to confess that in a blind listening test, I wouldn't be able to pick between these two tube pre-amps! And in a way, that's a compliment to the PA-10 that had the signal passing through its pot, while I had replaced the pot in the TubePre with a simple voltage divider. Being a module, the TubePre would probably be easier to integrate into one of your own projects, for instance adding a tube stage to a DIY power amp, but the PA-10 takes up less space if you want a stand-alone tube pre amp. Both sound really good and it is really down to the 'packaging' and price as to which one is the better buy. Also remember that the PA-10 has a headphone out facility too but I have to report that the sound quality through the headphones is not nearly as good as it is through a power amplifier! I certainly wouldn't be able to recommend it as a dedicated headphone amp so you should look at it as a good tube pre amp with a headphone out facility (one that drives even high-impedance headphones)! 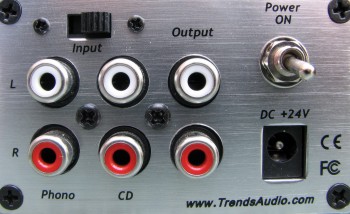 Unfortunately, I didn't have the Trends TA-10 class-T amp to try with the PA-10. It would have been good to set up the UD-10, TA-10, and PA-10 to see how they sounded as a 'complete' system. The best that I could do was to try the PA-10 with the Charlize and Audiodigit class-T amps, both of which made a very nice sound when used like that. In fact, if I was using one of these class-T amps, I would certainly want either the PA-10, or TubePre connected in front of it. But, as with the TubePre, I found that the VirtueAudio V1 class-T amp actually sounds better without the addition of the PA-10.

So, how about the 'SE' version? As I wrote above, the 'SE' comes with a 'better' valve, a 6H23n which I installed in place of the 6N11, and with upgraded output capacitors. After re-adjusting the DC bias for the 6H23n, I put the PA-10 back in the system with the TubePre to see if I could hear any difference. And I could! The sound was now more transparent, with a slightly brighter presentation. It was still very close to the sound of the TubePre but given the choice, I just preferred the full PA-10 'SE' specification! Interestingly, TrendsAudio state on their site that the 'SE' has a "relative thicker & warmer mid range and heavier bass" but I found the sound to be slightly more 'delicate', not in a negative way, but more revealing, more layered. Anyway, I would suggest that an extra 40 US$ for the 'SE' version would be money well-spent. And with the 6H23n installed, I actually liked the PA-10 driving the Virtue Audio V1 amplifier too. It goes to show how much you can 'tune' a system by using different types of valve!

So it's a thumbs up for the PA-10. If you are looking to put together a micro-system of separates, it should certainly be something to consider, particularly along side a class-T amp. And going by the TNT review of the TA-10 amplifier, you could do worse than look at an all-Trends **-10 system run from a computer.

ADDENDUM - After this review was published, I was contacted by a Trends distributor who asked me if I had noticed some issues that they had found with a batch of PA-10's. The issues were a noisy pot, and some hiss/hum. I went back and re-checked my sample and found that the pot was noisy. I had missed this in the review as I had set the pot on the PA-10 and then used the volume control in the power amp. The noise is only when the pot is adjusted and doesn't affect the sound quality but it could be irritating. As regards the hiss/hum, I can only just hear that if I turn both volume controls to max when there is a small amount of noise. This volume level would be far in excess of anything that I could listen to and I don't consider the hiss/hum to be an issue in my system at normal listening levels. The situation may be worse in other systems, depending on the equipment involved, and the grounding arrangement.

I wrote to Trends but did not get any answers to my questions about these issues. I hope that they will be resolved, and that the Trends distributors will monitor the situation before supplying the PA-10 to the public.