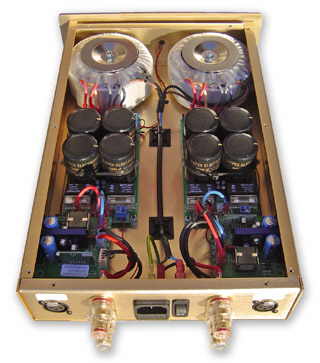 One of the main drawbacks of my DIY designs is the fact that they are not so easily accessible to newbies. This is especially bad because this prevents newbies, which are often young people with not so much money, to spare money by using the low cost components for a reasonable design, and completing it with an ultra low cost DIY box (if any...).

These units instead are one of the most recent incarnations of the "power amp module" you can find on many electronic kit catalogues.

Unfortunately, often these modules are designed more as a didactic aid than a real life, high quality amplifier, so the results are often far from optimal.

These modules, instead, are proud to differ. They are derived, as far as I know, from an original Philips Class D amp project, targeted to high quality music reproduction. The Hypex site boasts that the sound of these amps is better than class A and SET tube amps. The designers are also available for discussion and suggestions (a very long discussion thread is present on DIYAudio), which is always a good sign for an open mind. Everything seems very promising. So, it's time to check...

Hypex was founded in 1996 and started producing active PA speakers. From there, the step to HiFi subwoofer production was a quite obvious one. Later, Hypex adopted Philips' UcD technology and finally, after the decision of becoming one of the major players in Class D products design, hired Bruno Putzeys, the original UcD designer-in-chief.

UcD stands for Universal Class D Amplifier. The unit is based on the idea of amplifying sound using a sort of power oscillator controlled by the input audio signal. As the power transistors are essentially in saturation or interdiction, the power dissipation in the circuit is very low, and the efficiency (92%) huge, if compared with traditional units.

In turn, this allows for smaller and faster power devices and very small heat-sinks.

Even more interesting than these technical aspects are the original UcD design goals. The units are designed from the beginning in order to be easy to use as much as, or more than, any linear power amp. Their utilization must not require special EMC (electromagnetic compatibility) precautions. They have to be intrinsically simple, in order to be robust and inexpensive. They have to work fine independently from the load, as any good amplifier, and have a very low distortion throughout the audio band.

In a word, the dream of any HiFi designer (or his nightmare, perhaps...).

The unit under review

The unit I received for this review is not a standard product by Hypex: actually, Hypex normally supplies only the component modules. In our case the unit is completely dual mono, and sports the following components:

The UcD180AD's are high quality, balanced input, monoblock 180W/4ohm power amp modules, upgraded with AD8620. They are available also in a more basic version. Also an Ucd400 module (400W) and an UcD700 (700W) module are available. In the whole family distortion is extremely reduced, as is the output impedance, giving a damping factor of 400 at 1KHz/8ohm, which is unreachable in class A/B technologies - well, at least so I believed, until to yesterday: stay tuned for more...). As said, they have a balanced input, but they perfectly work in an unbalanced system, with basic connector adapter cables, or directly with RCA input pins. 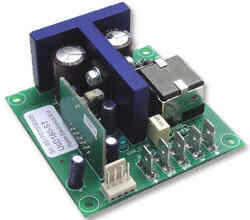 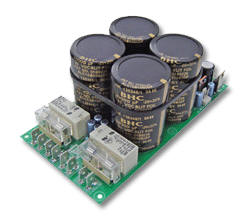 The HG power supply units are very high power and quality elements, each able to drive a couple of UcD180 or UcD400; on the unit under test there is one of these for each channel. Also the transformers are very large and massive. In facts these power supplies are traditional units, and not switching, as in many newer systems (for example: NuForce).

This contributes largely to the high weight of the amplifier. Note that this weight seems also an important marketing aspect: apparently, a traditional, huge and heavy amp seems in many case to be preferred by the average buyer to a small, low weight, switching PSU unit, regardless of the power and sound quality of this one. Just a further example of how many factors - all different from sound quality alone - affect the choice of a component whose main (if not only) purpose is to play music.

With respect to assembling, there's not much to be said as I received an already built-up unit. However, all connectors are plugs, and the matching cables can be supplied, or fast-on type, so everything should be quite simple. Also, instructions are supplied for correct input wiring.

Note also that the heat produced by these little monsters is extremely reduced. The heat-sink (the blue part) has just to be connected to any box panel, even the bottom is acceptable (by the way, whoever knows about heatsinks can understand they are not heat-stressed by just looking at their colour...).

Just to give an idea, the total price of this 180W, top level, oversized unit is probably around 850EUR, VAT included. However, you can possibly assemble a complete UcD180 unit for half that amount, provided you use using lower cost (and lower quality) components.

Only one caveat: the unit input is DC coupled, which means it is mandatory to avoid any DC on the input; note that some pre-amps have a very high and slow DC transitory at the startup, so it is especially suggested to power up first the pre-amp and then the amps.

As a matter of fact the presentation of sound is quite similar to a good class A amplifier or a single ended triode unit. Something - so to say - very different from the T-Amp, that I'll use as a reference, just because it is another widely known example of new Class-D technology amplifier.

The sound is clear, rather transparent, precise, detailed, with that specific "lucid" presentation typical of triode units.

Low frequencies are well present and controlled, even though perhaps not as much as you would expect from an amplifer with a damping factor of 400. The entire bass range is definitely round and full, pleasant and effective, exactly as it happens with many tubed amp systems.

Mid range is clean and smooth, not especially in evidence, but enough to give voices the correct body and appearance.

High frequencies are open, clear, lucid, really tubey. Given these qualities, the unit does not forgive sources with a "digital" flavour in the sound! In such a case the sound becomes rather "viscid", unnatural and as such unpleasant. Otherwise, it is limpid and smooth.

The soundstage is very wide and precise. No artificial depth seems to have been added, but all the natural depth of the recording is correctly presented. Despite the precision in the instruments portraits and in their positioning, the music, again as in tube units, tends to appear more as a whole than decomposed and dissected in its components as with T-Amp, for example. So the soundstage is very natural, very realistic, and very involving.

The black areas among instruments and players are therefore vibrating with music, instead of being empty like it sometimes happens with the T-Amp. However, a lot of details and ambience informations are transferred to the listener while that strange (T-Ampesque) feeling of shortened sound queues is completely missing.

The sound is always smooth and sweet, even though powerful.

Anyway, while the sound character is in some way similar to the SET's one, the energy delivered to the loudspeakers is a completely different thing: even with my speakers, which in spite of a relatively high sensitivity of 90-91dB are well known to be a difficult load, the power is definitely there, and even though I still have not found the amp that makes them really fly (in facts no one of the amps I tested through the years have been able to fully achieve these result...), I have never heard them getting any closer to the take-off.

Only at exceptionally high levels (really far, far higher than any normal listening level I can imagine of), and in presence of very complicated musical patterns and difficult loads, I have perceived something like an hint of grain. Actually it could have been - perhaps - a trouble in very high frequencies (cymbals, for example) reproduction in the most complex situation, or even early saturation: the listening level was so high that even a 180 watts unit might have been running out of steam...

If you still needed a further proof that amps based on new technologies (Class-D, or Class-T, or also Class-N, everyone seems to have his own private solution, or perhaps just name...) can sound better than traditional ones, here it is.

The UcD180 proved to be a sound, solid device, absolutely stable (no kind of issue throughout all listening sessions), easy to use, able to work under all conditions I tested without any problem.

Complete kits are available (at least through the Italian distributor), but even in case the desired configurations were not available, this should not prevent anyone from building it: most components are available from Hypex or their distributors, and the remaining are not critical at all and are very easy to find. Actually, the most demanding area is for sure the cabinet preparation....

So wrapping up, we have a 180W amp, with that delicate touch of a triode butterfly and the power of a solid state bull, easy to build, very stable, accepting with equal ease both balanced and unbalanced inputs, at a cost that is far away from anything comparable.

True, the low price is partially balanced by the assembling: however if you really do not want to face the trouble of assembling your own unit, please note that you can also find a few UcD based amplifiers on the market (for example, the Channel Island Audio D-200), even though as usual this comes at a (not irrelevant) cost...

In any case, the bottom line is clear: it is really time to get acquainted with Class D.

I just want to thank again Jan-Peter van Amerongen of Hypex and Andrea Aghemo of AVA Italy for the precious help and the pics.