what the manufacturer himself listens to... 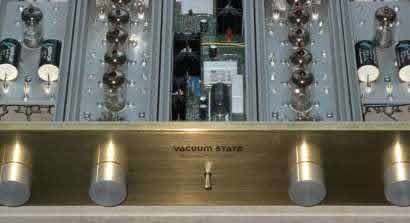 Having read my Tube Preamplifier CookBook review you know I have been counting the days until I got one of Allen Wright's creations where I wanted it - between my own turntable and power amp. More specifically the single-ended FVP5.

True, I could not get a production version of that preamp: instead it had to be Allen Wright's personal development platform, evolved over two decades from one of the very first preamps ever made by VSE.
The circuit itself was the latest FVP incarnation, 5A, meaning a hybrid FET/valve two-stage MC/MM phonostage with passive RIAA, and a full-valve cascoded line amp (older versions used valves and MOSFETs in the output stage). The power supply comprises one SuperReg serving both channels - Allen's AD797 opamp-based shunt regulator, itself a beasty of fairly high complexity. The differences with the 'real' FVP?
Well, for starters, what you can order through Vacuum State, be it readily built or supplied as a kit of components and modules, has a beafier power supply transformer. Then there is an impressive and large custom-built case, more a mainframe for accepting the myryad of circuit boards/modules available from VSE. (Incidentally, this VSE mainframe supports regular Wright-designed circuits as well as alternative versions and even circuits like the Loesch preamp.) And then there is of course the issue of component choice: the demo FVP had Sovtek 6922s and Audyn KP-SN foil-and-polypropylene caps. Not extremely fashionable, perhaps, but remember, this is what Allen listens to.
If you want more, there is more, VSE selling now their own secret KP capacitor which recently got out at the top of a German capacitor shootout.

Fully aware that I had a lab prototype on my hands, I ignored all cosmetics (or lack thereof) and operational foibles (occasional loud bangs in my fridge-infested garage/workplace, but, please note, troublefree operation in the main system in the living room). No, this machine was in purely for its sonic performance.

A quick sanity check on the workbench, operating at MC gain with a Thorens TD-160 and AT OC-9 cartridge (or did you think that only the Japanese could dream up impossible combinations?), proved that the FVP excelled in speed. There was plenty of gain, and not really too much noise.

Soldering out two resistors reduced the gain to what I needed in the main system, and after the move over the following was noted: if you want a cuddly tube warmth then forget it. I know solid state stuff that sounds more like tubes (or rather: tube vices) than this one does. No. The FVP5A sounded effortless, unforced, and impressively unimpressive. What do I mean with that? Well, there was a lifelike naturalness which made other equipment sound like it was so obviously trying to impress. Which, of course, doesn't... 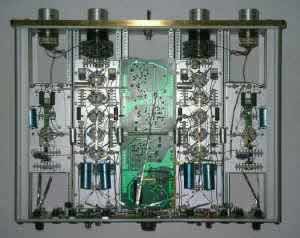 So dynamics were there, in full glory, explosive when called for, soft and whispering when required. This brings me to one of two aspects in which the VSE FVP5A bettered anything I've heard before: portrayal of drums and percussion. Insofar my Quad ESLs could replay these sounds, this was really it.

Of course, this has to do with the exemplary speed delivered by this preamplifier. Tonally this was reflected in a seemingly boundless treble (remember that this is one of a few phonopreamps that corrects for the real RIAA curve used by actual cutting lathes). The speed also showed up as an overall balance that is slightly lightweight. Take Geoff's Audion for an example that sounds decidedly more rounded and massy. However, I can imagine that the production version with its larger power section goes some way in redressing this. And even then it might be a matter of taste: I used the LFD power amp which on its own isn't exactly lush.

On the other side of the scales, we find a bass that is well-extended and tight and detailed. Playing at rather high levels, in a large room, and with my old Magnepan speakers, this made a real impact. But it wasn't just bass, no, rhythm was there too, and in abundance!

I said above that the FVP5, to me, is of reference calibre in two respects. Well, the second is imaging. This unit consistently put down a picture of width well beyond the loudspeakers, and of a depth and architecture that I deemed impossible in my room: I haven't heard this before, I think it will be a long time before I shall hear anything like this again!

So as you have gathered by now, the VSE FVP5 made for some very musical listening experience. Fine dynamics and utterly astonishing imaging render music replayed though it into something so much more lifelike, real and above all interesting, than often is the case with audio systems.

Rests me to say that I only used LP replay to come to these conclusions. I don't think I have a digital source at hand to do this wonderful preamp any justice. And frankly, I also think that those building/buying a VSE component are, before anything else, interested in the replay of vinyl, not?