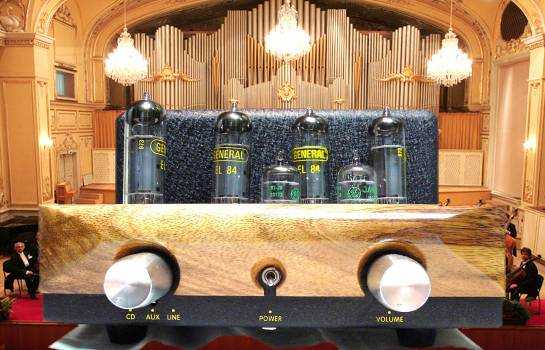 I freely admit that I was never a great fan of valves! But that was more to do with the fact that valve equipment was always more expensive than solid state, and as I was usually short of money, price played a big part in what I bought. If I am totally honest, I also felt that valves were old technology and not in keeping with the 'swinging sixties' when I bought my first hi-fi. Perhaps it's my age now, or the fact that (like the vinyl LP and turntables) valves have not only refused to go way but flourished, but I no longer think of them as old-fashioned. These days, valve equipment is much more affordable. And there is nothing like hearing something in your own home, so the likes of the Yarland M34, the Audiodigit valve pre amplifier, and the valve output stage in the MHDT Havana DAC, have belatedly helped me to understand the love, and fierce loyalty, that valve fans have for the genre. So when Italian importers, A.A.AV.T offered me a second Yarland amplifier to review, I was happy to oblige. 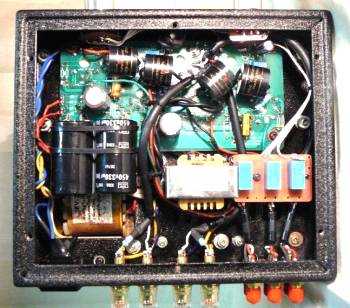 The Yarland FV-34C Euro version is a comparatively compact integrated valve amplifier with dimensions of (W)220mm (that's just a tad over half the width of a standard hi-fi shelf) x (D)180mm x (H)130mm, and weighing in at around 8 kilos. It uses four (is that what the FV stands for?) EL84 GENERAL NOS valves for the power section, and two more, JAN5670W GE NOS for the drivers. It only outputs 12 watts of power per channel and you will have to be quite new to hi-fi not to realise that this calls for some efficient speakers to get the best from it. The output is push-pull class-A. It also boasts in its parts list the highly respected 'Clarity Caps', and an ALPS potentiometer. A source selector allows you to select one of three inputs.

As with the M34, the FV-34C was very well packed, and prospective buyers needn't lose any sleep over their purchase arriving damaged. The valves are carefully boxed up separately and after unpacking everything, it is just a matter of fitting each valve into its socket. The valves and sockets are numbered so you can't go wrong. And that's it, sit it on the equipment rack, plug in source, speakers, and mains lead (IEC socket) and it's ready to play. There are only one set of binding posts (good quality insulated types), ie not options for either 4 or 8 ohm speakers. But the output is labelled 4-8 ohms so you can use either, although for the review I only used 8 ohm speakers.

The FV-34C looks quite good in my opinion. When I first saw the pictures of it, I didn't like the look of the black textured finish that I thought looked a bit 'industrial'. But the pictures don't do it justice, and it looks a lot better when it comes out of the box. The textured matte finish gives a slightly softer look to all the metalwork, and with the wooden front panel, makes the FV34C look quite at home in a living room. The front has a symmetrical appearance with the source selector on the left of the power switch, and the volume control knob on the right.

I started off with the FV-34C in my second system. A modified Logitech SB3 feeding a Monica3 DAC and straight into the FV-34C. Speakers were slightly modified Mordaunt Pageant II's. In use, the amplifier is extremely quiet when no music is playing. If you turn it on with music already playing, there are a few moments of silence after which the music fades in without any clicks or pops. Having let the amplifier burn in for a few days, I put on the playlist that I use to start these reviews. The first track, Stacey Kent singing the 'Trolley Song', is a real foot-tapper if the system is on song and with the FV-34C it was. Ms. Kent's voice was particularly pleasant and clear, and the instruments accurately portrayed. The top end, cymbals etc were not quite as crystal clear as with something like a class-T amp, and the bottom end not quite as tight as some of the better solid-state amplifiers that I have heard. But that is being quite critical and in normal listening, neither issue is particularly evident unless you specifically listen for them.

The FV-34C will play 'heavier' music too but I felt that in that system, With something like Dire Straits, I found myself wanting a bit more 'weight'. Even though the amplifier could 'rock' with the right material, it wasn't quite 'heavy' enough for me. The tone was very good with strings sounding lush, layered, and very pleasant on the ear. Not surprisingly, classical music was very well presented. Sound stage was large, and the instruments and performers well spaced out around it. Generally there was a lot to like about the FV-34C, and I was keen to try it in my main system.

The main system consisted of a modified Logitech SB3 feeding a DHDT Labs Havana NOS DAC, with an active filter and separate solid -state amplifier for the woofer sections of the Hawthorne Audio open-baffle speakers. Having adjusted the output level of the FV-34C to obtain the right balance with the woofers, I put on the same playlist that I had used in the other system. Even with the Stacey Kent track, the difference in 'weight' was quite obvious. Supported by a solid state amplifier on 'woofer duty', the FV-34C became almost a different animal. The timing that I had already noted as being very good became perfect. When that happens, it's impossible not to tap the feet, or feel the urge to get up and dance, or sing along. Tracks seem to play through much more quickly in the way a great movie appears to end too soon. The top end (cymbals, triangle, etc) wasn't quite as clear as I would have liked but to be honest, the overall performance was so good that it almost seemed ungrateful to mention it. 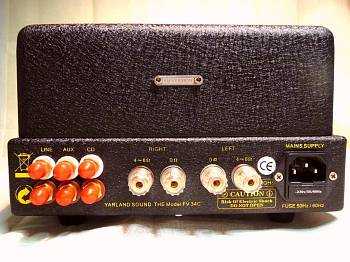 Putting on the Eagles 'Hell Freezes Over' album, I was reminded of the experience of listening to the early Eagles albums on LP. There was something that I can't quite explain that communicated that seventies West-Coast sound in a way that I hadn't heard for many years. The bass lines in particular were expressive, somehow making the whole album more communicative. The mid-range was glorious with vocals having such presence that on a good recording, the artist really did appear to be in the room.

The sound stage was very well defined, with such good spatial clues that I felt that I could walk around between the performers. The scale is large, particularly obvious with a good recording of a full orchestra. With the volume turned up a bit, it was very easy to hear the individual parts of musical notes, particularly the decay that on instruments like a grand piano was well extended. But the FV-34C is not hyper-detailed, nor clinical, staying very much on the side of musical, rather than 'electronic' in its presentation. And it never got fatiguing to listen to.

The FV-34C also handled more complex pieces of music with ease. Acoustic Ladlyland's 'Skinny Grin' for instance was handled in a way that made this album more comprehensible. In fact everything that I threw at it was played in an orderly (but not mundane) fashion. With some albums, it was like discovering parts of them for the first time. And it is worth mentioning that having replaced the Havana DAC with the Monica3 that I found the latter to be even better matched with the FV-34C. In fact, it's a sublime combination, as was the FV-34C with the Hawthorne Audio open-baffles!

But the one word that came into my head when listening to the FV-34C over and over again was 'fun'. No make that 'FUN' because it's a long time since I sat down in front of a hi-fi and thought that it was so much fun to listen to. Somehow, any short-comings didn't appear to matter. What the FV-34C did was make me think a lot about the whole issue of hi-fi, and what it should do for us. It is not the last word in amplifiers as regards sound quality but it is very good. And what it does is sound so enjoyable that it stopped me from thinking my usual thoughts about how I could further improve what I was listening to. It made me aware (again) that the enjoyment of the music is more important than the system that it is being played on.

Well I was all set to submit this article when I had a thought. Why not try the FV-34C on a Vertex coupling system. And while I was at it, I mass-coupled each of the six valves in an attempt to minimise any micro-phonic vibration. The results were very satisfactory. The top end became much clearer and the bass tightened up too. In fact when I started playing music after the changes, I felt the need to reduce the volume level slightly as it appeared louder. There was no reduction in the 'fun' element of the music and I would strongly recommend these tweaks to anybody using a valve amplifier!

Given that nearly all hi-fi equipment is a compromise to one degree or another, often between hi-fi accuracy and musical pleasure, the FV-34C is I believe, one of a very small number of amplifiers that can truly satisfy anybody who wants to enjoy the music more as well as have it played accurately. Given its price, I would certainly say to anybody looking for valve amplification, this amplifier will probably keep you smiling for many years to come, rather than have you looking out for your next amplifier upgrade! Keep in mind though that my rapture really began with the FV-4C in my main system with some assistance from the woofer amp, and with the coupling systems in place! With different speakers, and perhaps with a more acoustic taste in music, the FV-34C would be fine on its own. And don't forget that the above comments are made with the FV-34C connected to efficient (8 ohm) speakers that are an easy load. But at the price, the FV-34C gets a very warm recommendation from this reviewer!

And if you live in Europe, don't forget that buying the FV-34C from A.A.AV.T, means that you know exactly what you are paying for it (no import duties and VAT to be added). Also keep in mind that you are dealing with a European company should you require after-sales service! A.A.AV.T tell me that they will be bringing out an S.E. version of the FV-34C with 12AX7 T/J FULL MUSIC gold pin valves instead of 6N3 (JAN5670W). It will be available in the autumn of 2009 and its retail price will be 420 euros.