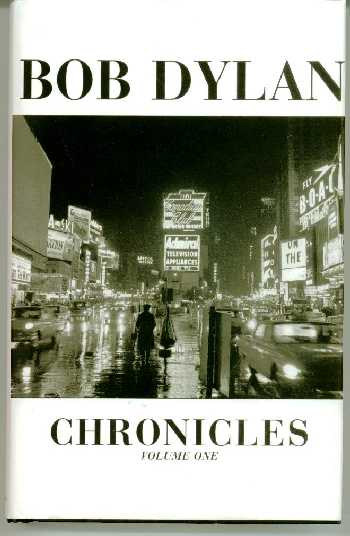 
"This a stereo & music website so why are you reviewing a book?"
Demand plebs, stage left
"Because it's by a musician about his musical evolution and it changes my way of encountering his music" replieth scribe, defensively

Bob Dylan is no stranger to written text, especially on the back of lp sleeves, and his fame is as much as a wordsmith as musician; The New York Times long ago called Bob Dylan the "poet laureate of young America." Dylan's first book Tarantula (written around 1966) was a free roaming poetic stream of consciousness, but was out of print for over 20 years (allegedly at the author's own request). "its structure of prose poem/poem/prose poem" (his publisher) was as unexpected as his new electric direction at the same time, with albums like Bringing It All Back Home, Highway 61 Revisited, and Blonde on Blonde. Tarantula returned to print a decade ago, but apart from books of published lyrics that was it.

Bob has finally committed pen to paper again (my romantic image not yet supplanted by one of the Zim hunched over a keyboard) to share an insight into the life that continues to deliver an ouevre of songs greatly valued by more than one generation. Like the author I too feel the need to choose my words very carefully and craft this review throughlly. Bob Dylan has, either inadvertantly or aided & abetted by record company hype, become viewed by many as the spokesperson for a generation, by some as a guru and by my English teacher when I was 15 as a "tenth rate poet with a record deal".

The most noticable thing about the book's structure is its concentration on episodes rather than linear narrative. Readers might expect this from a songwriter so influenced by the Beats and twentieth century literature, but equally readers might expect an unpunctuated stream of consciousness from birth to the present day. What this episodic structure does for me is reinforce the powerful lesson I learned from its content. That Bob Dylan doesn't make albums. That Bob Dylan doesn't think about a few days recording sessions as leading to "product". The music business typically refer to the lp or cd as "product", i.e. the artefact of production, but Dylan never uses the word once in this context. Indeed there's little sense of Dylan ever sitting down with a record producer or company executive to decide what order the songs will apear on an album. Bob Dylan is just a songwriter. Bob Dylan wants to be a songwriter so much that it must hurt at times.

The book is reminiscent of Dylan's albums, a series of self contained rambling ballads, populated by whimsical turns of phrase that perfectly encapsulate a moment or a feeling, connected by apparently linear narratives of mostly contextual importance. This makes it an easy read as the prose is rarely clumsy or turgid and I get the impression Dylan has worked on parts of it as thoroughly as some of his songs.

Bob Dylan is indeed a songwriter who has put enormous effort and dedication into being as good a songwriter as it is possible for him to be. Chronicles Volume One is as much a homage to his idols and heroes of songwriting as it is a story of how his own songs come to be written. Although there are times when Dylan's labours at improving his craft and his performance seem obsessive, it must be that level of obsession that enables Dylan's songwriting to reach such economical heights at times. Throughout this book he describes the perfomances and capabilities of his contemporaries in admiring tones:
"What I had to work at, Mike [Seeger] already had in his genes, in his genetic makeup. Before he was even born, his music had to be in his blood. Nobody could just learn this stuff..."(p71)
Throughout the book Dylan's admiration for his fellow performers remains in the foreground, as if he often checks to see how well he measures up to them. The book opens with his arrival in New York City and his early endeavours in the Greenwich Village folk scene. Dave Van Ronk (1936-2002) was one of the key figures in that time and place and was good enough to provide the young singer with a couch to sleep on for almost a year, where Dylan says he was able to learn much about performing songs. He was also to join Van Ronk's retinue singing at now legendary venues like Gerde's Folk City and the Gaslight Café.

From these modest beginnings as an aspiring folk performer, hard work brought early success, but Bob Dylan does not underestimate his own fame, nor does he display any false modesty about the effect he sometimes has on his fans.
"I was sick of the way my lyrics had been extrapolated, their meanings subverted into polemics and that I had been annointed as the Big Bubba of Rebellion, High Priest of Protest, the Czar of Dissent, the Duke of Disobedience, Leader of the Freeloaders, Kaiser of Apostacy, Archbishop of Anarchy, the Big Cheese. What the hell are we talking about? Horrible titles anyway you want to look at it. All code words for outlaw. (p120)
Dylan had not anticipated the effect this would have on his life and his personal relationships, and this preceipitated the first of several very public crises:
It was tough moving around...and I...had to take the bull by the horns myself and remodel the image of me...
Unexpected things like puring a bottle of whiskey over my head and walking into a department store and act pie eyed...I was hoping the news would spread"

It amazes me that he ever deluded himself that this might reduce public and press attention! In the mid sixties he moved his family out to Woodstock to no avail and then back to the hoped for anonymity of New York City, again remaining a centre of attention, so it was pack your bags kids we're off to Woodstock again, where the neighbours had naturally become sick of the Zimmerman house becoming the focus of demonstrations by assorted bands of disaffected youth. Dylan started assorted rumours that we are led to believe should have thrown the press-pack off the scent, but posing in a skullcap at the Western Wall in Jerusalem before suggesting he might give up music to attend college to learn design would seem like great press-bait to 21st century eyes. So he describes how he made two self-consciously bad albums:
"I released one album (a double one) where I just threw everything I could think of at the wall and whatever stuck, released it, and then went back and scooped up everything that didn't stick and released that too. I missed out on Woodstock - just wasn't there. Eventually I would even record an album based on Chekhov short stories - critics thought it was autobiographical - that was fine...I guess I was naive." (p123)


Naive and seeming not a little arrogant perhaps, although these bold stateemnts are also punctuated by the insecurity that his success may be the flash-in-the-pan he seemed so determined to manufacture. The trend-bucking John Wesley Harding return to acoustic roots doesn't seem so bad if that is one of the albums he writes so disparagingly about, although the book never names any album release and readers are left to guess which sessions end up on which slab of vinyl.

The phrase "Help me in my weakness" opens Drifter's Escape, last track side 1 and seems to describe succinctly the turmoil Dylan now describes as characterising that period.
"I had assumed that when the critics dismissed my work, the same thing would happen to me, that the public would forget about me. How mad is that?"

Dylan had found fame and then he'd found love and desperately wanted to set the career on pause and do the loving family stuff without distractions for a while. Dylan describes the insecurities he felt, as a performer and as a person, as the sixties came to an end, without sounding mawkish but beautifully encapsulating the ambivalence of simulataneous rage and sadness. In his prose he excells at the same themes as his music.

Bob Dylan's website has an audio-book excerpt download that illustrates Dylan's admiration for Woodie Guthrie, but also demonstrates his uncertainty about performances of Guthrie's material by other artists. In the early chapters Dylan's commitment to make himself an adequate peformer of Woodie's songs leads him to base his entire public performance repertoire on them. Throughout the book it is this combination of admiration for craftsmanship and drive to equal it that underpins Dylans efforts. Add a dash of imagination and personal experience and we may understand how songs like Blowin in the Wind and Idiot Wind both get written and performed.

Having earlier stated that the book seems more like a series of episodes, remembered in fragments as one does, the book does seem to have a metastructure of struggle - success - crisis - redemption as the book ends with Dylan feeling confident, complacent even, with his contribution. I confess my only experience of seeing Bob Dylan live was July 1981 at Birmingham NEC on the Saved tour. I arrived expecting to see the poet who voiced the concerns of the 60s generation. What I experienced was a lacklustre performance by some little old bloke who thought he was doing us a favour and rushed through the few old much loved songs interrupting the unwanted new trite offerings of the newly converted. It began to seem like the punk statements of my own generation were being justified at the most expensive gig I'd then ever attended. I was so disappointed I didn't buy another Dylan album until his recording with the Grateful Dead.

This book brings the opposite experience. It is the best music autobiography I have read since Ian Hunter's Diary of a Rock & Roll Star, which I read when I was 14 years old when my judgement may have been uncritical. I half expected Dylan's book to be a turgid treatise of trite self justification, but it reawakenned my interest in Dylan's songwriting to the extent that I have been playing my old Dylan lps ever since and I will buy some of his later offerings too.

A well written book that offers wonderful insight into the craftsmanship of songwriting and performance of one of the late twentieth century's great contributors. Dylan's seemingly odd decisions throughout his life become understandable as they are placed into the context of the man's own experience. A recommended read to anyone who has enjoyed Dylan's songs at any period in his long and variable career.