Audio Reality by B. Rozenblit 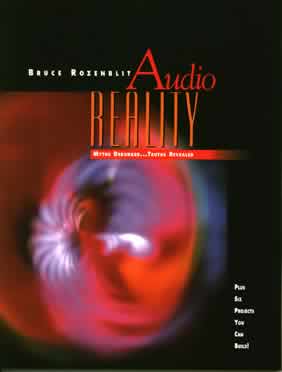 We have already wrote about AUDION, an interesting Italian editorial project by Luciano Macrě that covers anything is connected to tubes and tube equipment.

This book we are going to write about is distributed in Italy by Audion and has a strict connection with tubes.

The author is perhaps not very famous, but one of his products has been awarded a Class A status by Stereophile, definitely an exceptional situation, which is even more surprising taking into account the price: around 4500 USD for a monoblocks pair (but there exists a stereo version which costs about one half).

Now such a result cannot be obtained by chance: which is Rozenblit's secret?

The book gives a lot of answers. I do not think it can really give all of them, as a part of a designer's knowledge is almost uncoscious and cannot be easily transferred to anyone else.

The first part of the book is targeted to the average audiophile, the one that is scared by technical information, but would like to understand something more.

In the foreword some philosophical issues are faced: for example it is said that an amplifier is really the sum of its parts, and even though tubes and transistors and any other device has its own sonic imprinting (due to the different technologies, and not to mystical elements...) it is even more true that the sound of any device depends on the circuit it is used in.

These are neat, strong, sometimes nearly excessive ideas, but can be agreed upon by any serious hi-fi designer. Unless, obviously, he founds economically more rewarding to act as a Hi-End guru... in the end even hi-fi designers are human beings!

The book then deals with different electronic issues, even difficult ones, always trying to explain them in the most simple and direct way.

So you go through resistivity, capacity and inductance, active and reactive power, power supplies and power cords, dynamic range and "masking": complex concepts expressed in a really clear way.

As an engineer, I was slightly disappointed about only one detail: sometimes the Author goes a little too far in simplifying the problem, up to the point of using - in a non perfectly appropriate way - some technical word (for example the "transfer function"), or, better, extending the original meaning.

Anyway this does not make the approach less interesting, valid and exceptional: this is one of the very few books that addresses complex scientific issues remaining at a very simple level; the problems I referred to above, actually, give a measure of the difficulty of the task and a good reason for the lack of similar books, and also a good idea of the courage of the author and of his refusal of any convention (not supported by technical evidence).

The second part of the book is even more interesting: some hi-fi components designed by the Author are presented in detail, with a discussion of the technical issues solved during the design.

As you can see, all very special and personal projects, but at the same time nothing more complex than required: any design choice is justified during the project discussion.

Are they really good projects? No doubt on the Trascendental OTL, given the Stereophile classification. I can't say anything about the others as I have not listened to any of them, but I must say that they are exceptionally interesting and stimulating, and often offer really new approaches to the problems. I would really like to have time to test them.

This is really a book for a rather wide public: from the audiophile which has scarcely any technical knowledge and is looking for a simple and agile explanation (the writing is never boring at all), to the DIY beginner who wants a book to dream about and in the meanwhile start addressing to the most difficult concepts and perhaps build one of the suggested kits (there are also very clever and important safety precautions and general mounting advices), to the experienced DIYer who wants to find new ideas for his own projects.