“Domestic Monitors” from the Seventies 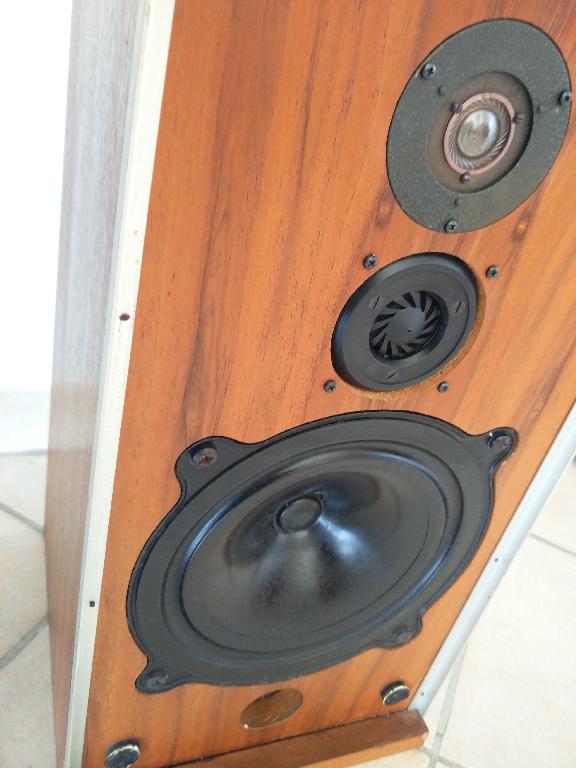 Nowadays everything older than 20 years is considered “vintage”. Sometimes, even horrible and cheap HiFi components and speakers from the Seventies or the Eighties are highly regarded and it is not unusual to find someone who believes they sound better than good, contemporary HiFi gear. This is, of course, an exaggeration: good things from the past can still sound interesting, but the vast majority are definitely obsolete.

Luckly, the B&W DM4 loudspeakers I'm going to review belong to the “good stuff” from the past. They were released at the International Audio Fair, October 1972 with the aim of out-performing competitive loudspeaker systems three times the size and twice the price. Not an easy task, I'd say!

To be more precise, two types of bass units were made, early ones had a white surround (tend to age badly, shrink and cones go off centre) and a later black surround. The crossover network was a third order 18 dB/oct Butterworth filter (3,5kHz-14kHz), and claimed frequency response extended from 30 Hz to above 25 kHz (±2dB). Actually, when measured in axis in an anechoic chamber, the frequency response was just 80Hz-20kHz ±5dB and 140Hz-14kHz ±3dB. Nominal impedance was 8 Ohm, with a minimum at 6 ohm (200 Hz) and a maximum at 25 ohm (∼2000 Hz). The DM4 monitor was individually tested in B&W's anechoic chamber and supplied with automatic pen plot showing frequency response.

Acoustic loading was by a very dense, critically damped enclosure with a small controlling vent to optimise the response between 60 and 120Hz. Not exactly a bass reflex, indeed. The cabinet was constructed of 19mm 750 density chip-board throughout, with inside balancing veneers. Inner surfaces of cabinet were absorbent lined, with the addition of long fibre natural wool, in order to reduce standing waves, reflections and colouration from the enclosure to a minimum. Binding posts accept only bananas, bare wire or forks are not allowed. 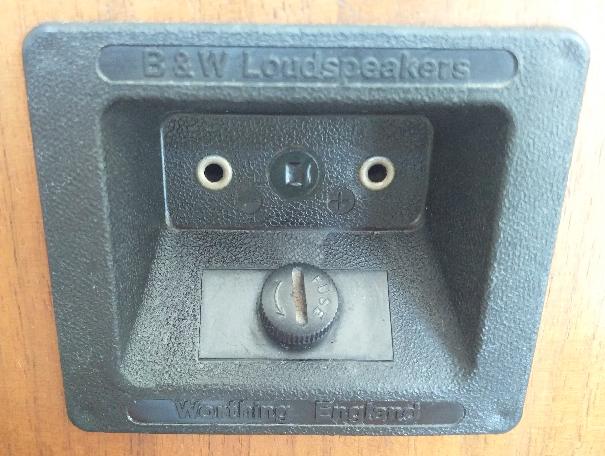 Available finishes were: teak, walnut or rosewood, plus a rare and unusual satin white finish or black ash. Claimed sensitivity was 95 dB with 4.8 watts on 8 ohm, at one metre, at 400Hz. This is not the usual modern standard measurement (dB/w/m) so it can be said the DM4 were sub-90 dB/w/m speakers. Hence, the claim - often found on the Web - the DM4 were “high sensitivity” speakers is based on a wrong assumption. They were not 95 dB/w/m!

Power handling might seem ridiculously low by today's standards, but it was considered quite an achievement at the time: indeed, amplifiers from 10 to 30 watts RMS were suggested.

The following chart has been taken directly from the official B&W documentation:

“Domestic Monitors” from the Seventies 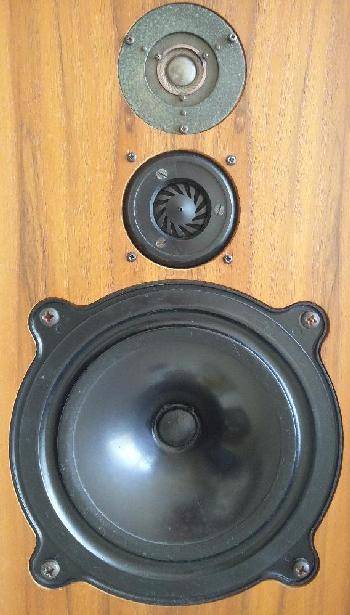 In order to understand the sound of these speakers one should know the rules the speakers had to undergo in the Seventies. For most audiophiles, the goal was to have, at home, the very same sound as a studio monitor loudspeaker. The general consensus was that true HiFi could be achieved by means of reproducing the same sound of the recording studio. Unfortunately (or not?), domestic listening rooms do not sound like recording studios. In the UK, BBC studios rules were the holy bible for audio. So, what should we expect from these “domestic monitors” (that's what DM stands for)?

First and foremost, if you are expecting a warm and muffled “vintage” sound from these speakers, you should be prepared for a shock! Vintage components are usually associated with the idea of a smooth, lush, unfatiguing sound. Many amplifiers and speakers of the Sixties and of the Seventies, indeed, sounded that way. Well, these DM4 belong to a different league. The sound is rather transparent and precise, with a slight tendency to dryness and brightness. Moreover, there's a presence effect in the midrange that emphasizes voices and strings. It is not unpleasant, but it is still rather evident. Do not expect warm and euphonic notes, as they were not allowed in studios. The highest range, despite the use of a supertweeter, isn't excessive or fatiguing. The supertweeters add harmonic content to the high range and that's all. Consider these drivers cross the tweeter at 14 kHz!!!

Bass performance is heavily affected by rear wall distance: the closer the better. In a freestanding (modern) installation, bass would be too limited, shy and without impact. Even then the depth of the bass range is limited. For sure, there are smaller modern loudspeakers that clearly and vastly outperform these DM4 in terms of depth, impact and power of the bass range, even if equipped with smaller woofers. Bass articulation is good, but severely limited in the first octave. Playing deep synthetic bass notes such those one can find on trip-hop music (Massive Attack, Morcheeba etc.) is troublesome. The woofers lose control even at moderate listening levels. As a consequence, lowest organ pedals are challenging for these monitors.

Generally, I have the feeling these speakers were designed with classical music in mind, hence that is the musical genre where they perform best, together with acoustic jazz, piano and voice or small ensembles.

These speakers won't shake your walls or floor, that's for sure! Not exactly meant to impress, these speakers prefer to underline small dynamic variations, especially in the mid-high range. Total dynamic performance is affected by their limited power handling capability. Not only can't the bass handle highly dynamic tracks but even the mid-high range doesn't seem at home with violent variations. Perhaps this is due to their “monitor” attitude (you don't need walls-shaking dynamics in a small recording studio, right?) or, maybe, the drivers are simply too old to move freely or react promptly to the amplifier input. Drivers suspensions might be a little bit stiffer, being 40 years old, and this clearly might affect dynamic performance.

Give them relaxed music and they will shine. Forcing them to reproduce highly dynamic tracks isn't the best way to treat these otherwise lovely speakers.

The DM4 weren't meant to create a 3D soundstage. Anyway, their monitor attitude helps building a 2-dimensional stage with stable contours and rich in details. Considering the rear wall should be close to the speakers, the sound is a bit forward and there's no depth to speak of. Even the height of the image is limited, despite the fact the supertweeters were slightly above my ears level during my listening test. Using tall stands might improve things in this area, but it will affect bass performance, so I'd rather stay close to the minimum height B&W recommended (50 cm).

Summarizing, bass extension and slam isn't up to modern standards. The bass is quite fast and controlled, but be careful with the volume knob! Playing tracks with deep and strong bass at high listening levels puts the woofers in big, big trouble. Hence, maximum SPL (without distortion) is quite far from what we can get nowadays even with less pretentious loudspeakers. For example, the Elac Debut B5 (a small and inexpensive modern bookshelf) can outperform DM4 max SPL with ease. Even overall dynamic performance is limited, compared with what modern drivers can do today.

3D imaging wasn't something to worry about, at that time. Hence, they can't rival modern loudspeakers in this area. Placing the speakers close to the rear wall, as suggested, flattens the soundstage even more.

The internal wool lining might tend to go out of the reflex port, in presence of deep and strong bass. Perhaps this was a problem of my test units, as wool might be wrongly placed, after all these years.

B&W suggested to use stands between 50 and 100 cm (!!!) and to place the speakers close to the rear wall to boost bass output. Remember: these were not meant to be free-standers. To be more precise, this is what the owner's manual suggests:

The position of loudspeakers is usually determined by the layout and size of existing furniture and the DM4 design has kept this fact firmly in mind, being optimised to allow correct loading when placed on a bookshelf or closely coupled to a main wall of the listening room. It was felt that designs which necessarily demand for a marked free-standing condition - with the loudspeaker removed a considerable distance from the boundaries of the room - place severe and often unpractical restrictions on the user.

Actally, they were right. The bass output, when placed far from the rear wall, is limited, so a certain boost is necessary. A wall bracket was also available, named WMK4, for those who didn't want use a stand or a bookshelf.

Toe-in isn't necessary, unless you place the speakers very far one from the other. B&W suggested not to exceed 4.5 meters of reciprocal distance (and not less than 2.5).

Considering their impedance curve, the DM4's are an easy load for any amplifier and though sensitivity isn't very high it is easy to fill a standard room with sound even using a 25/30 watts amplifier. Do not expect they will handle more than 30 watts RMS without suffering from dynamic compression and distortion.

B&W are quite easy to find in the second hand market but 100% original units are fairly rare. It is easy to find DM4's equipped with non original drivers, for example. Considering the costs of a full restoration project, I'd suggest taking into serious consideration only 100% original speakers. Replacement drivers might be hard to find. The Coles 4001 supertweeter is still available, for example at FalconAcoustics.co.uk, where the tweeters are listed as “new 2018 manufacture stock”. Celestion HF1300 tweeters and B&W DW200/4 midwoofers are harder to find, sometimes they pop up on Ebay or similar sites. If you already own a pair of DM4 that you wish to restore, try having the drivers repaired instead of replaced. Non original drivers can heavily modify the tonal balance of these loudspeakers.

The first thing to check, in case of any malfunction, is the fuse located below the binding posts. Replace it with a similar one. In any case, cleaning the fuse contacts with a deoxidizing spray is the wisest thing to do.

The B&W DM4 are classic British monitors, with all the pros and cons of this type of speaker. They sound transparent and precise, with extremely low distortion levels, within their physical limits. They can represent a good project, if you wish to taste that vintage flavour. Considering they were introduced 47 years ago, they still sound surprisingly good, especially with classical music and jazz.