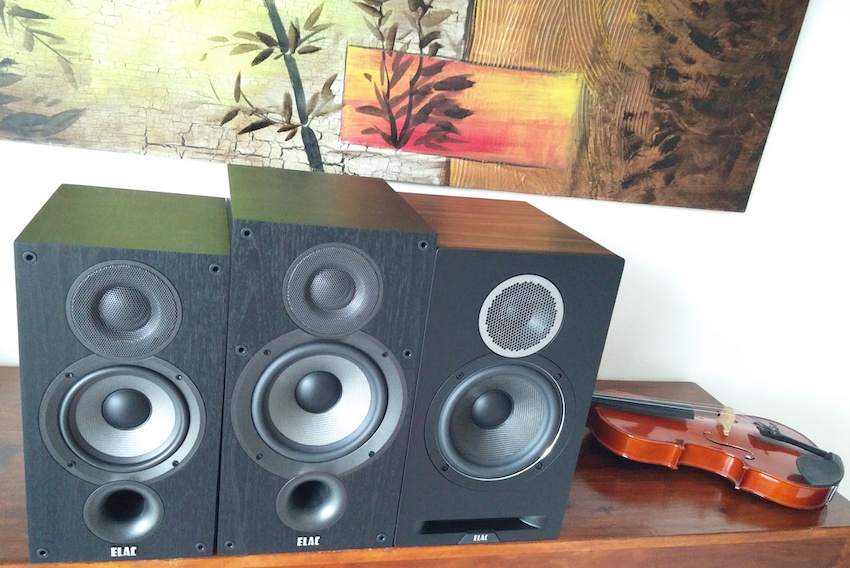 The first Debut series (say, 1.0) of loudspeakers, by world renowned designer Andrew Jones (here an interesting interview at Sound & Vision) caused a stir in the HiFi world, because of their insanely high quality/price ratio. The 5.1 and 5.2 bookshelf models were simply embarassing for their competitors, and not only that, they could easily rival the performance of 1000€/pair loudspeakers, and costing just a ¼ of that sum.

Just a couple of years after that excellent “Debut”, Elac decided to release a completely redesigned 2.0 series of loudspeakers, where everything was new, from cabinets, to drivers and general layout. Hence, I was extremely curious to test the new 5.2, 6.2 and 6.2 Reference models!

Apparently, this new series of Debut loudspeakers has been redesigned from the ground up: gone is the rear firing reflex port (now it is a front firing air duct), woofers and tweeters have been replaced by new units and the MDF cabinets have been reinforced to reduce colourations and vibrations.

Instead of listing all the technical details and claimed specs here, go and visit the official 2.0 series webpage, where you'll find all the information you'll need.

Alongside the 2.0 edition of the Debut series, Elac has also released a Debut Reference series, which consists of a bookshelf, the 6.2 Reference, a floorstander, the F5 REF and a center channel. This new Reference series is meant to take the Debut performance up to another level, while improving the looks as well. You can find the technical details on the official Debut Reference webpage.

I'm going to review the 5.2 and the 6.2 bookshelf loudspeakers from the 2.0 Debut series, against the 6.2 Reference bookshelf. The Reference edition of the 6.2 costs something around 500€/pair, while the standard 6.2 is priced around 320€/pair and the 5.2 sells for 280€/pair. The 5.2 and the 6.2 are definitely too close (just 40€ of difference!) while the 6.2 REF is definitely on a different price class. Owning a pair of 5.1 Debut speakers (from the first series), I'll directly compare the new series performance against the old one.

The first Debut series has been criticized because the high range wasn't extremely extended and defined, and because of the rear firing reflex port that made installation a bit troublesome, since close-to-rear-wall installation made the bass range a bit too heavy. Hence the reflex port has been moved up front and a new tweeter, with a waveguide, has been adopted. Also the woofer is different and uses a stiffer membrane.

As a result, the high range is now more extended and defined, and the bass range, thanks to the new woofer and stiffer cabinet, appears to be faster and more controlled. Comparing the 5.1 against the new 5.2 it is immediately clear that many things have changed. The quality/price ratio remains stellar, but the general performance is different.

First of all, as I already said, the high frequencies are much more refined and extended. This allows for a deeper and better detail retrieval. Moreover, the harmonic content is richer, especially on strings and piano. Voices are clearer, though a bit lighter. The bass range is faster and much more controlled, though it lacks the incredible extension of the 5.1.

Somehow, it seems the overall behaviour is more “HiFi-oriented”, and this, while it certainly answers to the critiques that the first series received, on the other hand makes the sound somehow less magic. In my opinion, the older 5.1 was more musical, had a fuller sound, perhaps a bit coloured, but more, much more involving. The new 5.2 is more precise, better defined, clean, controlled...but it has lost that magic touch the 5.1 had in spades. Overall dynamics is on par and so is 3D virtual imaging, with the new 5.2 being able to create a virtual stage which is better focused.

To each one his own, I'd say, but if you twist my arm, I confess I'd never trade my 5.1 for a new 5.2. More HiFi, but less music, and this is definitely not good to my ears. Your pathway may vary, of course! That said, certainly the 5.2 are still tremendous value, and can put many competitors to shame, quite easily. You'd never believe all that sound comes from 280€/pair loudspeakers.

Now enter the 6.2 Reference model. Initially, I thought this was just an aestethically more refined version of the 6.2 but how wrong I was, these two speakers are entirely different! First of all, the Reference cabinet is slightly different in size: 359 x 208 x 275 mm against 195 x 375 x 268, secondly the reflex port has a completely different shape (for a better control of air turbulence, I guess), and, thirdly, the cabinet is way stiffer. Even the drivers are different: the tweeter has a different waveguide and grill while the woofer is completely new, with a cast aluminum chassis for improved rigidity. The quality of the finish is higher, as well. Indeed, the price tag reflects all the changes that have been applied: 530€ vs 320€.

How does this translate in terms of performance? Hard to admit, but these babies are much, much better than the standard 6.2. The performance level is definitely in another league. The extra 210€ required are worth the effort, without any doubt. If you compare the 6.2 against the 6.2 Reference, face to face, you'll find yourself wondering what is the sense of having a 6.2 in the catalogue.

Everything is simply, vastly better: the first thing that you detect is a smoother sound, with less distortion, more clarity and naturalness. Voices, for example, appear much more natural while the musical texture of the tracks is presented more effortlessly. The sound is bigger, more dynamic, controlled and, definitely, much more involving, without being fatiguing. 3D soundstage is better, in every way, in terms of size, precision and focus.

I'd be surprised to see someone purchasing the 6.2 if he has the possibility to directly compare these to the 6.2 Reference. The 210€ difference is nothing (the price of decent speaker cables?), compared to the difference in terms of musical performance. 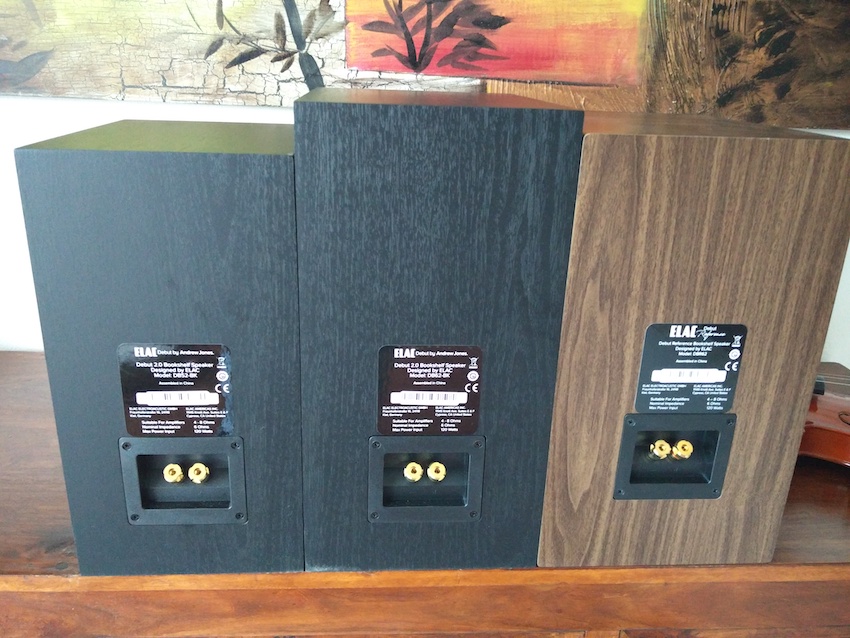 Manufacturing & finish.
It is hard to complain when the quality/price ratio is so high. The speakers are nicely finished for the price and the 6.2 REF look more expensive than they are.
I have just one big complaint: it seems replacement drivers aren't available. When warranty is over and a tweeter or a woofer goes banana, you can simply put the speakers into the trash bin. A very strange marketing decision, that forces you to buy a new pair of speakers, if something goes wrong. I'm pretty sure this will have an impact on sales. I, for one, would never buy a loudspeaker if replacement drivers (which are proprietary!) aren't available.

Sound.
In my opinion the general character of these 2.0 series is a little bit more HiFi: more detail, more presence in the mid/high range, a faster and more controlled bass. There's a price to pay for this: that touch of stunning magic of the 1.0 Series seems definitely gone. You might like this 2.0 series more, but in my opinion the 1.0 series was more musical, though certainly less precise. The 6.2 REF is a stunningly good loudspeaker for the price, instead. So much that it makes the standard series seem quite pointless.

These speakers seem to be an easy load, and the 6 ohm nominal impedance will not be a problem for the majority of amplifiers. Even inexpensive 20 watt Class D chip-amps will get the job done. Certainly, the 6.2 REF deserves better ancillaries to shine.
Sensitivity is around 86/87 dB, so any good 20 watter will be enough, if the listening room isn't too large. They can sound extremely loud, when required.

Summarizing, I'd say the new 2.0 Debut series is still hard to beat, in terms of quality/price ratio, even considering a bit of the magic of the first series is lost. Instead, the Reference series belongs to another league, definitely. Once again, Mr. Andrew Jones proves he knows what he's doing with loudspeakers! Once again, these speakers raise the ante so much that life will be hard for their competitors. Kudos!