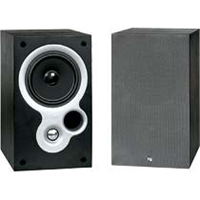 Looking for a pair of compact speakers for use in a study, I considered several models from a variety of manufacturers, but was intrigued to come across the KEF Coda 70s. KEF, from Maidstone in the UK, have of course been around for a long time and have forgotten more about good speaker design than some manufacturers will ever learn. Even though their founder is sadly no longer with us, the company continues along it's traditional path of technical innovation coupled to quality engineering, which has been the hallmark of KEF products throughout their history. Many of us still fondly remember the original Concerto's - and just how many other manufacturers were pleased to get their hands on the T27 tweeter.
But the Coda's are budget speakers. Can such a distinguished reputation possibly be maintained with loudspeakers costing less than Euro 300?

Surprise No.1. Open the KEF Coda 70 box and you may feel that a mistake has been made at the factory. Instead of a pair of cheaply finished crude boxes (as featured in many speakers costing considerably more than the Codas) a pair of beautifully finished loudspeakers emerge, with real wood veneers on all sides (dark apple in this case - very nice) and quality binding posts which accept bare wires or banana plugs and are suitable for bi-wiring. The aluminium surround for the drivers is also very well finished and fitted. The grills are sonically quite transparent and neatly designed also. Indeed, the more closely you examine the Codas, the more you feel that this can't possibly be right. These are very expensive speakers, surely? How can KEF possibly sell such a product at such a low price? The answer is that they are assembled, with obvious care, in China.

Surprise No.2. Presumably then, they must have skimped a little on the drive units - right? Wrong. A well finished 130mm treated pulp cone bass/mid unit is complemented by KEF's 25mm aluminium dome tweeter, sitting in this well proportioned ported enclosure. KEF quote a frequency response of 45hz to 27khz +-3db @ 15 degrees off axis, going down to 39hz @ -6dB. This is an astonishing performance from such a diminutive enclosure, just 305 x 180 x 275mm. With a sensitivity of 91db and nominal 8 ohm impedance, they should be easily driven by the typical mid-range components of their target market, although they might equally be used to good effect in higher end systems.

Surprise No.3. The biggest surprise of all, the sound. Having listened to a brace of quite expensive small speakers, each with their own particular characteristics, I was a little apprehensive that maybe the Coda's would sound a little dry and metallic (as can sometimes happen with such tweeter designs). Indeed, another much more expensive speaker from a renowned manufacturer, featuring a very advanced metal dome tweeter, did indeed exhibit this characteristic. But the Coda's didn't! The top end was simply extended and detailed, providing all the speed and dynamics one would expect from such a design, but with no discernable harshness. Vocals were clear and airy, being projected away from the speakers. Brass was exciting and full of character, but not strident. Violins were clear and extended, with detailed string tones and bowing. This is a very good high frequency driver. How it can be provided in a sub € 300 pair of speakers is a mystery that would astound Agatha Christie. Moving down, the mid-range is open and at first I thought maybe a little unexceptional, until I had played a variety of recordings and musical styles, and realised that it was actually quite accurate and smooth. This is particularly noticeable on orchestral works, where the timbre of different instruments is preserved, even within a complex musical passage. The "Mozart clarinet" test, which I like to use as a reference, was passed with flying colours, the instrument sounding clear but full-bodied, as indeed it should.

Moving down further, one wouldn't really expect earth shattering bass from such a design - the laws of physics don't look kindly on such practices. If you are looking for a gut wrenching, thumping, one note bass that will loosen your roof tiles and send cats and dogs running for cover, then you probably won't consider diminutive speakers such as the Coda. However, such a performance has little to do with the reproduction of music. If, on the other hand, you like to hear a tuneful and reasonably extended bass within typical domestic living spaces, then here comes surprise No.4. To my astonishment, the little KEFs were producing a weight in the lower registers which I would not have expected from such a small design. Furthermore, this was not in the form of a resonant 'lump', but a genuinely tuneful bass performance. This was not over emphasised. The Codas simply followed what was fed to them. A good example being the opening bars of Wagner's Das Rheingold, which was reproduced with all the scale and majesty required to convey this music, followed equally by the subtlety required for the following bars.The Codas are fast and clean, and quite capable of capturing the excitement of good performances, where this exists in the source material. Within the fairly small listening room (about 5 x 4 metres) they performed very well indeed.

Of course, the design of any small speaker is something of a compromise and the Coda 70 is no exception. The trick is to make the right compromises in order to extract a musical and enjoyable performance from such a diminutive design. In this respect, the solid experience of a company such as KEF pays dividends, and it shows in the remarkable performance of the Coda 70s. Indeed, if I were in the business of manufacturing small, high quality (and expensive) loudspeakers, the Codas would frighten me to death.
There is something inherently "right" about them which leaves most of the competition way, way behind. You don't see much mention of the Codas in the mainstream hi-fi press, presumably because they focus more on the KEF Q series, and perhaps also because the name "Coda" has been around for such a long time. This is a great shame as, in this little speaker, KEF has created a modern classic. Even amid a veritable sea of good small speaker designs, the little Coda 70s shine through like gems. Precious gems, which will charm and delight their owners in a manner to which few loudspeakers aspire. This would be a remarkable achievement at any price. At less than € 300, it is simply astonishing.

If you removed all branding from these speakers, gave them to the mainstream hi-fi press, and told them that they cost four or five times as much as they actually do, they would receive rave reviews. If you told them they were hand crafted by dedicated experts in Japan or the US from natural materials and individually selected components, they would believe you, and elevate them to cult status. These are fine little speakers with a distinguished pedigree. The fact that KEF are virtually giving them away, is a conundrum for you to consider as you sit back and enjoy your favourite music. They must be one of Hi-Fi's best kept secrets.