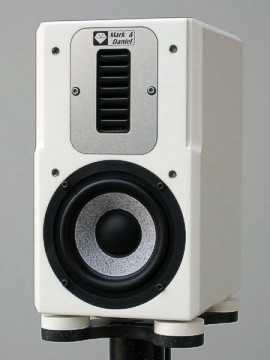 Well there I was looking for something else to review when Mr Editor notified the staff about some speakers in 'marble' cabinets. Now being an environmentally-concerned sort of guy, I was a bit worried about shipping such items around the planet but I agreed to audition them. Like much hi-fi these days, the speakers, Maximus-Topaz to give them their full name, come from the far-east, so shipping them to me in England isn't much different to sending them to Italy or the USA etc.

The Topaz (as I shall now refer to them) arrived while I was at home, much to the relief of the parcels delivery driver who was more than happy for me to take them off the van. For small speakers, they pack quite a lot of weight! On opening up the box, the first items I found were the grilles, the instruction book, and a pair of gloves with rubber non-slip palms and fingers. What a lovely touch I thought, and when I removed another layer of packaging, I realised why Mark & Daniel Audio Labs supply the gloves. Wearing them, I carefully lifted one of the speakers from the box, feeling like an employee in a museum handling a valuable artifact! Yes, the finish on the Topaz is something special and worthy of such careful handling!

The cabinets of the Topaz are built from MDF but then coated in a thick layer of resin that looks (and feels) a lot like a marble finish. M&D call this CAM (compound artificial marble) and apart from looking very pretty, it is designed to stiffen the cabinet and reduce vibrations. It is such a perfect finish that I realised why the gloves were provided, both to prevent the slippery cabinets dropping through my fingers, and to keep off greasy fingerprints! The cabinets are 29.0cm (11.4“) high by 17.0cm (6.7”) wide and 21.3cm (8.4“) deep. Despite their diminutive size, they weigh in at 8.6 Kg (19 lb)!

Looking carefully at the design of the Topaz, I couldn't help but admire M&D in breaking away from the more usual two-way bookshelf design! Their work on the cabinet is both a visual delight, and practical. The long-throw woofer to compensate for its smaller size is another good idea! And the use of the air-motion transformer instead of a tweeter allows them to design a better crossover.

These speakers were obviously brand new and straight from the factory so I hooked them up to run them in for about a week. I actually used a Charlize class-T amplifier that despite the efficiency of only 85.5 dB/2.83V/1m made a pretty good job of driving the Topaz. I'm not recommending the Charlize of any or the other small class-T amps as an ideal partner for the Topaz, but it did reassure me that this speaker is not too hard to drive. Listening for a short period each day revealed that the main change in the speakers during this burn in period was an improvement in the bass.

After the burn in period, I hooked up a Burson Audio PI-100 power amplifier to the Topaz, and began my audition. I should add that this was in my upstairs audition room that is around 3 metres (10 ft) square. Being used to large open baffles, with their extra 15 inch woofers, I was rather expecting to notice a lack of bass from such small stand mount speakers. However, I listened to several albums before I even though about the bass. It was only when I put on Pink Floyd's 'Wish You Were Here' that I felt that anything was missing from the lower frequency range. In fact the Topaz positively amazed me with it's bass. More so because I had the speakers a few feet from the wall behind them, rather than close to the wall which is more normal with small speakers. One thing I would say to potential Topaz owners, and that is to make sure your system is well set up and produces 'clean' bass. When I started off, I noticed a bit of a boom from the Topaz but then remembered I had hurriedly set up the CDP, and not put it on its equipment platform. When I remedied this, the boom disappeared.

The Topaz was the first speaker that I had heard that used a version of the air-motion transformer. M&D call their version the DREAMS unit (Directly Responding Emitter by Air Motion Structure). It is capable of being crossed over a lot lower than a normal tweeter and goes down to around 900 hz in the Topaz. Another advantage I found with this unit is that speaker height is not too critical. I preferred to use the Topaz on tallish stands which made for a very large sound stage with performers appearing to stand before me, rather than crouched down. Crossing over from woofer to high-frequency driver well below the usual 2500-3000hz is considered much better and the performance of the Topaz does much to confirm that theory!

The Topaz is not the most revealing speaker that I have heard but that works to its advantage in that it always sounds 'pleasant' to listen too. Somebody else described them as having an optimal balance between resolution and musicality and I would agree with that. I found myself doing marathon listening sessions with this loudspeaker and never growing tired. It does produce enough detail to pull off tricks like re-creating live venues such as concert halls. It also did a brilliant job of correctly locating all the Q sound effects on Roger Water's 'Amused to Death' album.

Being much encouraged by the amount of bass the Topaz was putting out, I decided to try them in my main system. Again I was pleasantly surprised to find that I could listen to a lot of material without wanting more bass! My downstairs room is approximately 4 metres square with a large opening into the adjacent room. The sound stage that the Topaz creates is huge, wide and deep, although not as deep as my open baffles. Imaging is spot on as you would expect from a speaker with a very small front baffle. The DREAMS unit does a sterling job of vocals, and high frequency sounds such as symbols are solid, firmly placed in the sound stage, and very tangible. But what sums up the Topaz most accurately is that they are enjoyable. They make listening fun and manage to do so with just about any type of music! Crisp, fast, foot-tapping, atmospheric, were other notes that I made while listening! Oh, and did I mention that the Topaz are acoustically invisible - you just can't tell where the music is coming from!

As I had my woofers still set up, I turned on the woofer amp to try them with the Topaz. The effect was quite amazing. The sound stage grew even larger and there was a great synergy between the woofers and Topaz. So much so, that it only required a twiddle with the volume level of the woofer amp to make it sound as if the pair had been designed for each other! Trying albums like 'Wish You Were Here' again confirmed that this was a stunning combination. The Topaz doesn't actually need bass reinforcement for most music but adding it really makes them shine! I was getting addicted to listening to the Topaz even before I added the woofers. Suffice to say that with the woofers, I temporarily lost the urgency to reinstate my open baffles. I'm not saying I prefer the Topaz but they did such a good job, I was happy to keep them in my system for much longer than was needed to write this review.

Obviously, the type of customer who is going to be interested in the Topaz is somebody who has either got a small listening room, or who is obliged to have a smallish speaker in their room. If this is you, and you have resigned yourself to a 'small' sound, the Topaz is certainly one speaker to consider. Rather like the Tardis in Dr Who, it seems to defy the laws of physics and produce much more than a small box should do! Add to that, a very attractive appearance, and the Topaz must be in a very small group of speakers that will satisfy an audiophile and his spouse! Remember also that you will need amplification capable of getting the best from the Topaz although they are certainly not one of the most awkward loads. Something with around 50 watts of output power, similar to the PI-100 should do fine but as ever, try and match the amp to the speakers if you can.

For now, I am single and able to indulge myself with massive open baffle speakers. But who knows what the future will bring, and if Mrs Right came along and refused to live with such large speakers, at least I now have one option to fall back on. On second thoughts, I will stay single!