Mini horns for a small room 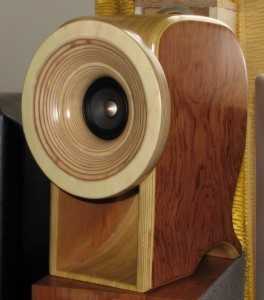 I don't do a lot of speaker reviews. Not because I don't like doing them but because with half-a-dozen sets of my own, including two pairs of large open-baffles, I don't have the room anymore to take in larger speakers, and store mine while I am reviewing them. But I do keep my eye out for smaller speakers that I can squeeze into my second listening room. So when the Music Paradise BS3 bookshelf speakers came up for review, I agreed to audition them.

The SB3's are unusual speakers being of the back-loaded horn type with a large wave-guide in front of the diminutive (full-range three-inch) driver. Built (or should that read 'sculptured'?) from real timber, they are rather striking too as I think you will agree. The review samples arrived in a much smaller box than I expected. That's not to say that they were not well-packed, just that they were even smaller in reality than they had looked in the pictures.

My second listening room is approximately eleven feet (3.5 metres) square, and ideal for this type of speaker. I set them up on a pair of tall speaker stands, connected them to my modified CD723, and a Monrio class-D amplifier and sat back to listen. The first impressions were not good. Al Stewart sounded as though he was singing through a megaphone. If you have ever heard the Temperance Seven you will know exactly what I mean. So I decided to leave the SB3's playing music for a few days before doing any further auditioning. 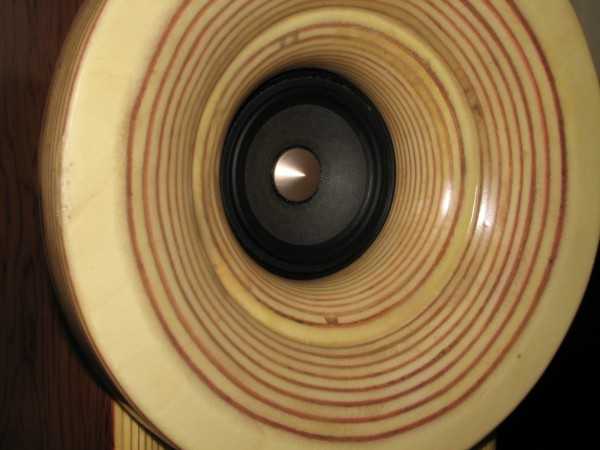 When I returned a few days later, the sound wasn't quite as 'strange'. During the course of the session, I spent a lot of time positioning the SB3's and eventually found a position that worked best in that room. The speakers were pushed back right into the rear corners, such that the walls formed an extension of the horn mouth. This did wonders for the low end which understandably isn't that prominent in a speaker of that size. In fact for everything bar rock and techno music, there was no real awareness of lack of bass with the speakers sited in the corners. And there was no boom either, in fact it all sounded quite coherent as you would expect with a single driver. The SB3's managed a reasonable sound stage albeit without much depth. Imaging was OK in that you could discern the principal singer or instrument although you can't expect 3d pin-point imaging from a tiny 3 inch driver. However, I'm sorry to report that they were the only positives I noted. The clarity was lacking to such a degree that it seemed an effort to listen for any more than a few tracks at a time.

Trying to improve the situation, I opted to change amplifier, and replaced the Monrio with an integrated valve amplifier, the Yarland M34. Things were a bit better with the Yarland, the synergy was better for sure, but I still didn't like what I was hearing. Next up was a class-T amplifier. This was by far the best combination, and although the SB3's are rated at only 80 db efficient, the class-T had no trouble driving them (I should point out that this class-T is rated at 90 WPC into 4 ohms). Although things were now better than when I had started, the sound quality still didn't put a smile on my face.

Summing up, I would point to the driver as the Achilles heal of what is an otherwise decent (and adventurous) design. Using any driver that isn't up to scratch in a design like a horn is going to mercilessly show up it's weaknesses. I feel the design deserves a much better driver to stand any chance of being a real 'hi-fi' speaker, rather than just something that looks very attractive. Sadly there isn't anything much more to say about the SB3's, I wanted to like them if only for their 'cuteness' but I couldn't ignore their sonic short-comings. True, they look very good but that's only a bonus when something sounds good too. You don't expect speakers of this size and price to sound amazing but you do expect them to at least sound as good as speakers that you can buy in the budget hi-fi stores. I really hope that the manufacturers will search for a better driver that will do justice to the rest of the design, but as they are now, I can't even recommend an audition.