Back in September 2014, I visited the National Audio Show (NAS) near Milton Keynes, Bedfordshire. The show had the expected mix of the big manufacturers and UK based distributors, but for me, the interest was in the small UK manufacturers.

It was nice to see some new faces, one being RMB Loudspeakers, who are based up in West Yorkshire. RMB were showing their 22/3 and 40/4 speakers, both new and different from the norm designs.

The RMB room at the NAS was producing some of the best sounds at the show. This is a considerable achievement, when you know how hard it is to get a small hotel room to sound right and not be impacted by the surrounding rooms.

The 40/4 model is a three way design using 4 drivers, doubling up with the bass drivers. What particularly attracted me was the use of the dome mid-range driver. The specification for the 40/4 is as follows:-

As you can see, these are sizeable boxes that need positioning reasonably close to the rear wall. The distance from the rear wall is a problem for me due to the slopping roof line on the right as you can see in the picture below.

My usual speakers prefer a free space position, this applies to either the restored Magnaplanar SMGa or the Eryk S Concept Superioros, which is surprising as the Superioros are so small! 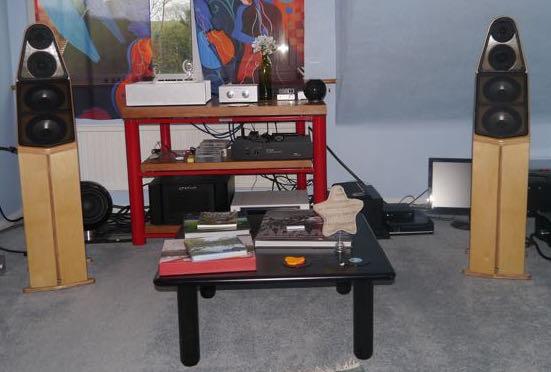 The 40/4s did not come fitted with spikes, although the base is fitted with threaded inserts to take spikes. In practice I did not feel spikes were needed as the bass was tight and clean sounding.

To position the speakers I put them as close to the rear wall as possible, though they were still about 1m away. Initially I used my own multistranded speaker cables from Audioquest, after reading the instructions from RMB I changed to the supplied DNM single core cables. 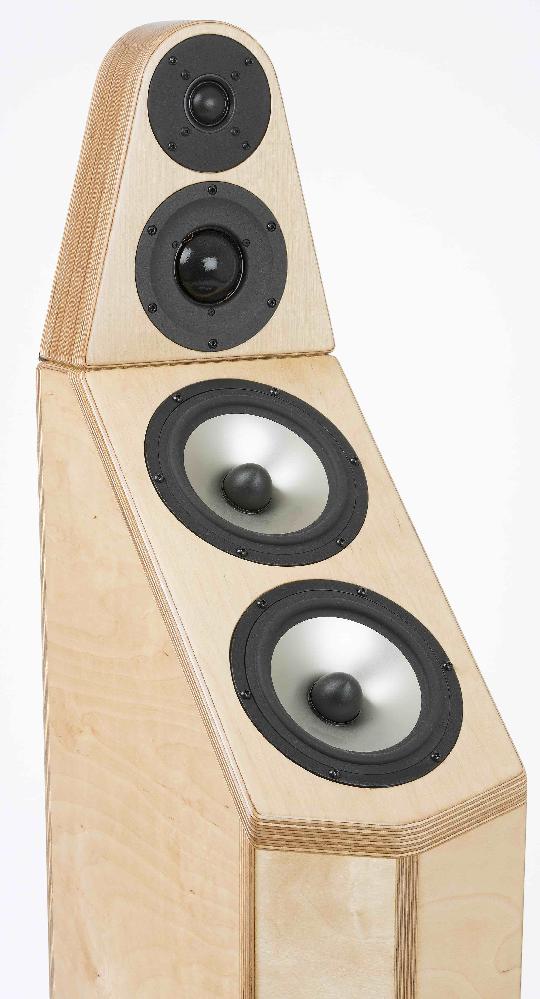 Choosing the right speakers for a particular room is always a balance of looks and sound quality. To get the chosen speakers to work correctly means matching them with a suitable amplifier and to some extent speaker cables.

I have a range of amplifiers to pick from, and I had to try most of them to settle on the right balance of power and refinement. As stated earlier I used the supplied DNM speaker cables as they gave the best balance between refinement and dynamics.

The speakers were tuned using a Nu-Force class D amplifier so I tried a couple of my low power class D amps, the Amptastic Mini-1 and a similar amplifier from Indeed. Neither of these amplifiers had enough power and drive capability and were quickly replaced.

I also have a lovely Leak ST50 that I have rebuilt and this produces a marvellous sweet sound in the mid and high frequencies. For low volume listening the ST50 is ideal although it perhaps lacks in the dynamics.

My next choice was the Emotiva XPR2, a 500W beast designed in the US and built in China. The Emotiva does not give the most refined sound, very much solid state, the plus point is it has such grip and extension in the low frequencies plus stunning dynamics with the 40/4 speakers.

After a lot of switching around, I think on balance the Leak ST50 is the right choice, it has the sweetness in the mid band and treble with adequate bass extension and control. Valve amplifiers never have the depth and control of solid state in my experience, so the final choice is down to the listener.

I have owned floor standing, wide bandwidth speakers in the past, but in the end they were sold as they failed in the rhythm department, they sounded so slow.
The RMB 40/4 are a completely different story, they have a similar bandwidth to the Amphion Krypton mk1s I used to own, but they really play the tune and keep up rhythmically.
The Buena Vista Social Club album comes across with tremendous precision, the percussion is so realistic. The bass extension and leading edge timing really does allow the Buena Vista Social club to display all their music talents.

Turning to Paul Simon and the "Songs from the Cape Man" album, the track "Born in Puerto Rico" displays some percussion, that I have never noticed before. Not only do I hear the percussion I can clearly place it to the right rear of the sound stage.

The 40/4 are also able to portray the scale of the music with ease. As an example the tenor and baritone saxophones on the album Gerry Mulligan & Paul Desmond Quartet have real presence, with a rich harmonic structure.

For a change of musical style, I moved to some classic Gilbert and Sullivan operetta exerts on the album Topsy-Turvy. It was obvious the Leak ST50 was struggling with the amount of bass on this recording so the Emotiva XPR-2 was swapped in and then I could really appreciate the bass drum that features regularly in this recording.
The vocals came across a little harder, not as sweet as with the Leak amplifier but the benefit of this extra power added so much to the orchestra that is was a compromise worth taking.
With the Emotiva still in circuit I tried something more delicate, the Tallis Scholars and the Allegri Miserere. The grip and control from the Emotiva seemed to stabilise the sound stage making it easier to locate the voices in three dimensional space.

My time with the RMB 40/4 was a mixture of great admiration and a degree of frustration. The frustration was not with the speakers but the amplifier choice. It seems I did not have the perfect amplifier to drive the 40/4 with all musical genres. The Leak ST50 with ~25 Watts per channel was the best with my favourite female vocalists.

The balance and midband tone was perfect and the bass adequate. When the recording had more weight in the bottom end, like the Gilbert and Sullivan, the Leak was just not up to the job, the added grunt from the Emotiva really helped the 40/4 to deliver the goods.

What these speakers require for the perfect amplifier match is a valve amplifier of 50 watts or more. When I first heard these speakers at the National Audio Show last September, they were being driven by an Icon Audio amplifier. The amplifier was the Stereo 60 with KT120 valves, and from memory, this seemed a perfect choice.

Positioning is also very important to get the right balance, they do not like free space so must be positioned as recommended, not more than 50cm from the rear wall, a position I could not achieve in my quirky listening room.

Given the right setup, and accompanying amplifier the 40/4 really deliver the music. I expect given the best amplification possible, and the right room, the 40/4 would challenge most speakers up to £10K, this is amazing as they retail for £2,850.