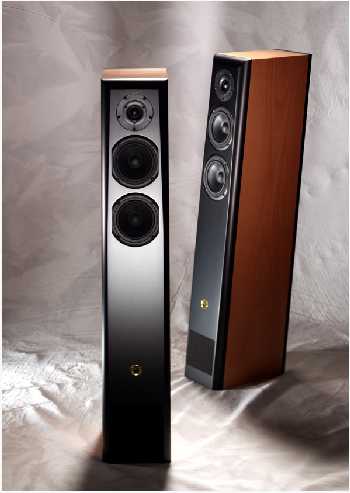 I must begin this review with an apology, as I've kept the Newtronics Skorpion X review samples for far too long. I meant to have this review completed weeks (months?) ago. In my defense, it's entirely understandable, when you realize that I have completely lost my mind. My wife and I had been discussing the possibility of finding a home to buy as an investment, for rental property. We found a house, and our offer was accepted by the seller. The catch? The house needed a "bit" of work.
Many thousands of dollars later, work is nearly complete, most of my frazzled nerved are on the mend, and my 16-18 hour work days are over. What on earth was I thinking? I hope that the folks at Newtronics GmbH, and Interlink Audio, the US distributor, understand. Now off to the review.

I found the Skorpion X to be a very attractive speaker, almost understated in its beauty. This is a good thing, in my opinion. Many high end components are cosmetically so different from mass market components that they really stand out. Not so with the Skorpion X. Sure, guests in my home admired them, but I didn't get the "What the hell are those?" comments that I have gotten while using other pieces of gear.

The Skorpion X is a slender tower that measures 41" tall, 7.5" wide and 11.5" deep, tilting backwards towards the rear wall as its height increases. While some people may believe that this gives "time alignment" for better imaging, I believe that the idea of time alignment is bunk: while the sound waves emitted from a tweeter and a woofer are different and the alignment of the waves certainly sounds desirable, I doubt that musicians really think about time alignment when they perform.
The venue is going to make the biggest impact on the sound quality. At home, the listening room will be a far bigger determining factor to the quality of reproduction than whether or not the speakers are time aligned. The speakers sure do look nice though.

Like the Gate's, the Skorpion X is touted as a 2.5 way speaker, meaning that the woofer and the midrange drivers overlap quite a bit. Listening to the speakers did not really give this impression at all, they sound like a true 3 way loudspeaker, with each of the 3 drivers handling most of their duties independently of each other.
The front baffle sports a small 140mm poly type woofer, above it a similarly sized midrange that appears to be doped paper. At the base of the front baffle, just above the floor is the output for the transmission line. A transmission line is a type of cabinet that allows even small diameter drivers (like those of the Skorpion X) to reproduce very deep bass, and also increases efficiency.
Deserving special mention is the tweeter, which is a special "ring radiator" unit, used in other manufacturers far more expensive offerings. Around back is a pair of gold plated 5 way binding posts; no plastic here. There is no bi-wiring capability. Newtronics states the frequency response as 40-20,000 Hz plus or minus only 1dB, in other words, an extremely flat speaker with nary a glitch in the frequency response. (Most other speaker manufacturers specify a tolerance of plus or minus 3 db from flat or a deviation of up to 6dB).
While frequency response specifications tell nothing about the way a speaker will sound, the tight tolerance of the Skorpion X does indicate that much care has gone into the design of the speaker. Sensitivity is rated at 90dB/ watt/meter. Impedance is rated at 4 Ohms. The Skorpion X should mate well with a wide variety of amplifiers. (More on this in a bit.)

The Skorpion X was placed in the usual spot in my listening room, flanking my stereo cabinet on the long wall, approximately 2 feet from the rear walls, and many feet away from the side walls. I did have one problem with the setup however: while the Skorpion X's were supplied with floor spikes for better coupling, one of the spikes did not fit properly into the threads in the bottom of one of the speakers.
After fussing with them for a bit, an idea came to me. I ran a bead of removable rope caulk around the bottom of the cabinets, and lugged the speakers to their proper positions, and pressed them to the tile floor. The combination of the speakers' formidable weight and the rope caulk did the trick: not only were the speakers coupled to the floor, but they were far more "sure footed" than they would have been using the spikes.

When the Skorpion X first arrived, I knew I was in for an enjoyable experience. Like the Newtronics Gates that had just been shipped back they had a tonal character very similar to my long term reference, the Infinity Kappa 6.1. The big difference? The highs seemed a bit clearer, with more articulation, but the star was the bass response. It was not only subjectively deeper, but much tighter than the Infinitys.

The speakers changed very little during break in. However, during the break in period, the upper midrange did seem to increase in output, giving the Skorpions a rather "forward" sound. As break in continued (to around the 100 hour mark) the midrange seemed to become much less forward, settling into a much more laid back, relaxed transducer. The bass is deep and tight, and really is the speakers' strong suit.
What about the expensive ring radiator tweeter? It actually is so smooth, that it brings no attention to itself. Sure, the highs are there, but this isn't a speaker that you will sit down to listen to and comment on them. You may, as I did, listen to music and forgetting about the system entirely.

The Skorpion X images reasonably well, throwing a sonic image behind the speaker beyond the wall behind them. As far as soundstage, the image rises approximately 2 feet higher than the cabinets. I tend to like larger speakers, my belief being that larger speakers produce a larger sonic image. The Skorpion X seems comfortable playing all kinds of music. If the recording is of less that stellar quality, the Skorpion X smoothes out the abnormalities, making the deficiencies much less noticeable.

How do they compare to the similarly priced Soliloquy 6.2 that I reviewed last year? Well first off, the 6.2 is a much less forgiving speaker that the Skorpion X. If one has a deficiency in their system, it will become immediately apparent. Bright electronics need not apply with the 6.2, but I feel that the warmth of the Skorpion X may tame brighter electronics, resulting in a more musical system. Where the 6.2 is designed for transient speed and detail, it is definitely voiced towards the cool side of neutral. The much warmer Skorpion X is voiced to accentuate tonal richness over all other attributes.

The late great Listener Magazine used a pretty cool rating system, part of which was their "Pancreas Rating". This rating signified "non Hi Fi sound, for music lovers only". I never really got what they meant until now. The Skorpion X really does none of the "Hi Fi" stuff well. Yes, they image reasonably well, they are extremely flat, they throw a wide soundstage, but in the overall scheme of things they just play music. And they do that quite well indeed.
These won't be the speakers that you brag to your Hi Fi buddies about, but they will be the speakers that I can see many listeners coming home to after a long day at work and basking in the music. Isn't that the real point of this hobby/obsession after all?

I Nearly Missed a Highlight

For the vast majority of my listening, I used my McIntosh MC-162 solid state amp. I ignored my other amp, a JoLida JD-502B. My thinking was perfectly logical, as the smaller Gates, which I had reviewed earlier this year did not mate well with the JoLida; they seemed to need the bass heft and control of the McIntosh to shine. Recently, on a whim, I decided to pull the JoLida out and hook it up in place of the McIntosh. Did it sound better than the Mac? I'm not even sure what "better" is.
The two amps sounded quite different from one other. The Mac excelled, as expected, in bass control as well as extension. Bass notes seemed subjectively quite a bit deeper, and those low notes were tight and well controlled, with no flabbiness. The JoLida, on the other hand, did that special, alluring "thing" in the midrange that tube amps do so well. The bass that did come from the Skorpion X's, although not as deep, was tighter than other speakers I've used with the JoLida.
The JoLida also seemed to have a somewhat deeper soundstage. Neither presentation is "right" nor "wrong", it boils down to personal taste. Even though both amps sounded completely different via the Skorpion X, I could be happy either way. I was pleasantly surprised. Where the Gates did not mate well with the JoLida, the Skorpion X seemed entirely at home.

Keep in mind, as good as the Skorpion X's sounded, they are unable (as are all speakers) in breaking the basic laws of physics. Although they produced copious amounts of deep bass, the small diameter woofers can only move a finite amount of air. This became obvious while playing "Man of Constant Sorrow" from Donna the Buffalo's CD "Positive Friction (Sugar Hill CD B00004TDPC.) The song will be recognized immediately by movie fans everywhere, as it was a crucial part of the plot of the hit movie "O Brother".
Even though it will be immediately recognized, Donna the Buffalo's version is not the expected bluegrass version, but a pounding, rhythmic, and very refreshing reggae rendition, with extremely deep bass. I had the gain up quite a bit, and it became obvious when the sound of the kick drum slammed into the room, the gain was up a bit too far. While the Skorpion X's will play way down deep, they can't do it at "live" volume levels. Other than this one instance, this wasn't an issue for me.

Additionally, the Skorpions have a power handling rating of 125 watts into their 4 ohm load; the McIntosh MC-162 is rated at 160 watts into 4 ohms. When Newtronics says "125 watts" they mean it. Hardcore head banging bass freaks need not apply, at least without a high powered, high SPL subwoofer. I believe the vast majority of listeners will be more than satisfied with the bass output of the Skorpion X.

The Newtronics Skorpion X should mate well with a wide variety of electronics, due to the fact that they do not highlight "warts" in either the system or the recordings played upon it. A perspective buyer could be comfortable in spending a bit more buying the Skorpions, while saving money on the associated electronics, knowing that the Skorpions will be enjoyed for a long time.
Then, as the listener deems necessary, if ever, the electronics could be upgraded, while retaining the Skorpions. While a shade under $3000 per pair isn't exactly "chump change", they may be just the ticket for those who want to get off the "upgrade merry go round" and just enjoy music.

We at Interlink Audio, Inc. thank Nels Ferré and TNT Audio for their review. While the speaker is capable of reproducing quite a bit of bass at the low end, we acknowledge some limitation at the extreme. Overall we find that the Skorpion, which lists for $2,750 is very capable at reproducing the low end and are very enthusiastic about its position in the marketplace overall, even in direct competition with speakers costing significantly more.
Thanks again,
Pablo de Pinies - President - Interlink Audio, Inc.