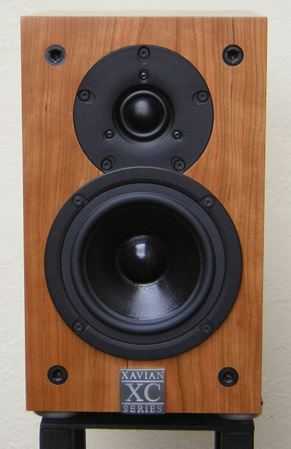 Too Good to Keep a Secret

TNT-Audio has already reviewed an earlier Xavian bookshelf model very favourably [see Stefano Monteferri's review of the XN 125 in May 2001] so I was delighted to get the chance to test their newly upgraded budget model, the Mia, first introduced in 2000. I say 'budget' because these speakers are competitively priced, not because they resemble any of the cheap, mass-produced boxes out there. Having read some of the enthusiastic reviews of the first MIA in the Stereo Times, I was expecting something a bit special and I was not disappointed. Xavian reports further improvements to the Mia in the form of better drivers, a more solid cabinet and higher quality components in the crossovers.

The Mias are compact bookshelf loudspeakers (HxWxD: 180 x 300 x 220 mm). They are available direct from Xavian for around 630 Euros. For this you get a pair of handsome Italian-designed units, hand-built using high-quality components. The 22mm MDF cabinets are cherry-veneered and very solid (7,1 kg each). Physically, they have flair and style--just look at the large name badge on the grilles and the leather embossed manufacturers mark and serial number on the rear! But, they are not flashy. They do not draw attention to themselves visually or sonically. This latter characteristic is the mark of a good speaker. The Mias direct your attention to the music. I do not have the equipment to test this, but my impression is that they reproduce sound evenly and smoothly across their whole frequency range (55 - 40000 Hz).

This evenness makes them very revealing. I tested them with a variety of vinyl and digital sources and a range of amplification, from solid-state and valve integrated amps to a mix of pre-power combinations (valve and hybrid). The different sonic character of each combination was clearly evident through the MIAs, e.g. using the same source, the valve pre and hybrid power combination sounded smooth, even laid back, whilst a valve pre and valve power combination sounded cleaner and brighter, with the high frequencies well forward. Switching to a new mid-price valve integrated restored the typical valve smoothness, at the expense of some HF precision and excitement. ]

My reason for pointing out how revealing these speakers are is to warn that they are likely to reveal the strengths and weaknesses of sources and amplification used with them. So, be warned. These speakers might just push you onto an upgrade path for other parts of your system. They are a safe purchase for a new budget system, but, as it may not be possible to audition these locally first, it would be preferable to get the speakers first and then partner them with sources and amplification you know you will like too!

As with all rear-ported bass-reflex bookshelf speakers, the last place you should put the MIA IIs is on a bookshelf. They need good stands, and I note that Xavian makes fine-looking matching stands which would secure these speakers via a screw recess in the speaker base (similar to that found to secure cameras to tripods). I did not have access to the Xavian Classico stands, so I placed the review units on rigid 620mm stands, spiked at both floor and speaker end, and located about 50cm from the wall (Xavian recommends more, 60-100cm). To avoid damaging the beautiful cherry veneer finish, the speakers were placed on spike pads of the kind intended to protect wooden floors from spiked stands. 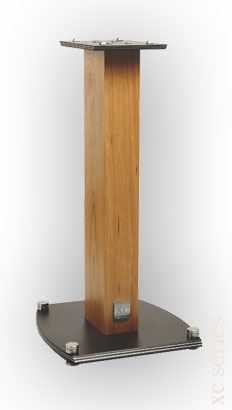 For the published specs on the Mias, see: Mia Specifications on the Xavian website.
Note that while the earlier Mias had a nominal impedance of 8ohm, in the revised model this has been reduced to 4ohm. This change was made to enable Xavian to use a new tweeter capable of an upper frequency of 40kHz.

I didn't disassemble the crossover, but you can have a peek at the quality components and careful damping here. The crossover frequency is reported to be at 3000 Hz. 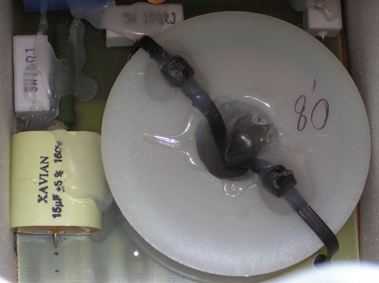 The aluminium rear port offers a further nice quality touch. Connection is via a pair of single XAVIAN binding posts, i.e. the MIAs are not bi-wireable. 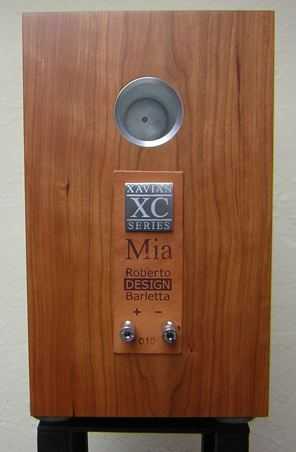 My only quality concern is that when I unbolted one of the midrange Vifa drivers, I noted that the wiring tag had detached from the driver. This is not Xavian's fault; it looks like a weakness in the component manufacturing. This is something that Xavian could watch out for in future, because a loose tag like this might produce some mysterious buzzing over time. I must stress that I did not hear anything like this before opening up the speakers and that I know Xavian would quickly replace such a faulty component if such a problem were detected. In fact, having pressed the tag back into place, the speaker sounds fine.

As I said earlier, I tested these with a wide range of ancillaries. At the budget end, the MIAs added further delicacy and resolution to the sound of my internally upgraded NAD 3120, but I think that they are really too good to be used in a second or 'bedroom' system, unless you get two pairs! Whilst Xavian recommends power amplification of 30-120W, there was absolulely no problem with the NAD's 28W output. The speakers are sensitive for bookshelf speakers (86dB; 2V/1m).

In my main system, I lived with them daily for weeks without missing my reference KEF 104s--they may be about 30 years old, but they are not called Reference speakers for nothing! During this period I was also rewiring and testing a Decca London International tonearm, upgrading a Dynakit ST70 power amp and beginning some review work on another valve integrated. (More of these later in other reviews.) The MIAs revealed the character of each. To give another example, they clearly showed up some of the sonic weaknesses of the Decca tonearm: brightness, tracking difficulties, etc. Conversely, I have come to enjoy the way the MIAs reproduce bass and the soundstage, even in my less than perfect listening room. They are great in a small room, but I would like to test them sometime in a larger space. My hunch is that they would sound even better there, at higher volume. There is no problem with these at high volumes. They are very capable.

But, you might still be wondering what they sound like. My answer throughout this review is that they sound like your sources and amplification. They really do show them up. And they reveal the quality or otherwise of the recording you are listening to. But, I think it is possible to describe their character, using the helpful speaker evaluation scale offered by Linkwitz Lab. They are detailed and fast. Their sound-stage is spacious and wide, with accurate separation of images (e.g. even separating the three instruments in the pop-punk mix of a Green Day single).
The limits of my listening room prevent me commenting fairly on the depth of the sound-stage. Vocals tend to sound forward. The treble in proportion to midrange also sounds on the bright side, but on vinyl it could be revealing the harshness of the cartridge I was using, or even the acrylic platter mat I have been playing with! Treble on CD sounds very crisp and precise.
The bass is satisfyingly rounded. With my valve amp it is not absolutely tight, but it sounds right, melodically and rhythmically. The same can be said for the fine resolution of guitar strings. Overall the effect is definitely involving. Listening to "Matapedia" by the McGarrigles, I had to force my attention back to listening to the technical aspects of the music reproduction, but I kept being drawn into the music.

Quality and Design for the Real World

In all, I like these speakers a lot. They look beautiful and reproduce the signals they are fed faithfully and reliably. What more can you ask for? Well, it would be nice if more people could audition these speakers at a local dealer. Xavian loudspeakers are not well-known outside Europe--yet! I hope that this review is one more step towards changing that. This manufacturer deserves to be much better known. I would recommend that interested US or UK distributors should get in touch with the head of Xavian, designer Roberto Barletta. My thanks to him for supplying the test units.