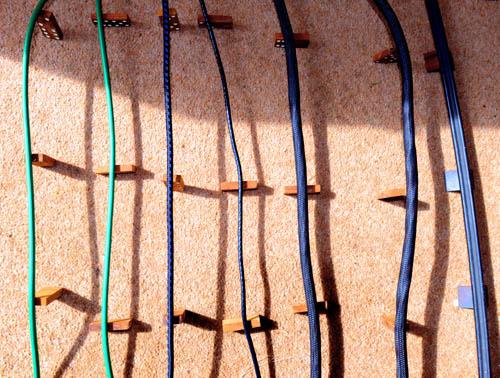 The Hypothesis: raising loudspeaker cables from contact with the floor will improve sound quality

Busy lives mean some reviewers can rarely contribute, but I hope I can raise a smile when I do write for TNT-audio.com. This time I hope to raise more than a smile for you, as I propose that you raise your audio cables from their current prone positions.

TNT-audio.com are indebted to our avid reader Kim who drew this idea to our attention. He had read that Nelson Pass had raised this as an important issue and indeed had rescued an important hi-fi show demonstration in a hotel room. Kim informed one of our longstanding contributors, who having insufficient time to write it up, passed the story on to me, the TNT-audio cub reporter.

According to the story that Kim heard, Nelson Pass, one of the greats of amplifier design, was dissatisfied at the quality of sound being made by an audio show demonstration system that included his own electronics. He investigated the causes of the problem and eventually identified that the loudspeaker cables were lying directly on the floor. We do not know if this was directly onto floorboards, particle-board, vinyl floor covering (unsuitable for digital) or carpet; Kim could not recall that part of the story. We do not know if interconnects were affected too, or whether this was purely a problem relating to loudspeaker cables. We do know that when Mr Pass raised the cables a few centimetres from the floor (it might have been inches, if the show was in the USA), the sound was transformed. Whether any special cable-raising devices were used is also not clear. However, the TNT-Audio staff of enquiring minds needed to know if this effect is fact or fiction, and if it makes a difference, what works best?

Previously, Fletcher Munsen wrote on TNT-Audio.com that while our ears are the best judges in determining if our systems sound OK, sometimes our ears need some help. A stethoscope and an accelerometer were employed to try to identify the precise nature of any effect, if any effect were forthcoming. Evening after evening, and weekend after weekend have been devoted to this project. Three questions had to be answered:

Does raising loudspeaker cable or interconnect cable from the floor make a difference?

Yes there is an audible difference, sometimes, when a cable is raised from the floor. It is not an obvious order of magnitude change, but it is not something we have to listen for so closely that we are obviously imagining it by willing it to be there.

Does the height a cable is raised make a difference?

There was a clear preference for a constant distance from the floor and being kept well away from walls. Cables formed up and down like a roller coaster sounded incoherent as if the pace and rhythm of the music were slowing down and speeding up at random. Different cable constructions benefitted from different heights from the floor. The stiff copper dumbbell section Naim NACA5 was better at a generous 250mm, while very heavy multi-strand silver-plated copper was better at 15mm. Single-strand solid core cable needed greater height, similar to the Naim, while basic 79 strand was fine at lower altitude of 35mm. The surprise was interwoven constructions like plaited cables or litz style, which were best in a straight line between amplifier (positioned at speaker terminal height) and loudspeaker terminals.

Does the material used to lift the cable make a difference?

Yes it does. Remarkably, the material makes a difference, but no one material is universally better than the others. Magnetic metals were audible but sounded worse than no cable raisers, with any kind of music. Aluminium, a metal prone to eddy currents, was better than cast iron or carbon steel, but inferior to no support at all, with all kinds of music. Copper blocks worked less disastrously OK's under copper cable and silver-plated copper cable on jazz material and country & Western, but were still inferior to other materials. Wooden dominoes worked best of all, better than ordinary wood of the same size, better than plastic dominoes, and this applied to several different sets of wooden dominoes.

There was no particular frequency region that benefitted from this tweak. Equally, raising a cable does not make it sound like a different kind of cable. Raising cables just seems to enable a cable to perform better at what it does already. It might be likened to buying the next cable up in the same manufacturer's range.

However, the interaction between materials and cable and music was the big surprise. Because we happened to have some traditional wooden dominoes of suitable dimensions (35mm x 15mm x 5mm), these were soon pressed into service. Thinking about which materials to use, we happened to have a box of dominoes in the room that would serve to stack up and therefore make pillars of variable height. We tested other bits of wood, but for some reason the dominoes seemed to be superior. We borrowed a selection of different types of dominoes from various sources, including children's dominoes with coloured dots. They enabled fine tuning of the lower heights, and experiments with variable heights. Clearly drilled dots, through the top layer of laminated dominoes, worked particularly well with music from CD sources. Because many dominoes are made of 3 layers of different woods, they are acoustically inert and dimensionally stable.

Visitors' scepticism fell away like dominoes as they heard the experiments. Because they assumed we were actually changing cables, they thought they were participating in a cable group test and were amazed to find that they were listening to dominoes beneath the loudspeaker cables. Using unusually long interconnects between the pre-amplifier and power amplifier enabled us to try that location too. With the one sample we had of audiophile quality cable long enough (3m) for the experiment, there was a difference, but not as clear as with loudspeaker cable.

The most bizarre finding was how the effect of different material from which the cable support was made, was entirely dependent on the musical material being reproduced. As might be expected, music of Caribbean origin particularly benefitted from the accompaniment of dominoes. Digital material and the use of dominoes under a digital signal coaxial cable (third from left) were obviously enhanced by the numerical dominoes, especially the ones and zeros.

The biggest revelation came when we offered to try this at another audiophile's house. Asking for a set of dominoes to perform the demonstration, our host disappeared from the room and could be heard plodding about upstairs searching through drawers. Eventually he reappeared triumphantly brandishing and ancient cardboard box. Within the crumbling box (which sadly did not survive being reopened after many years dormant in a drawer, were the most beautiful set of Victorian dominoes we had ever seen. The ethics of making playthings from elephant ivory and unsustainable ebony were irrelevant to their nineteenth century manufacturer. Whatever the ethics, as the stylus descended on a recent András Schiff's recording of Chopin's 24 Preludes, we realised that here was a symbiotic relationship. Here is now a well tempered cablier.

It's cheap to try and you may well be surprised or even shocked. Try different height supports

Once convinced, you may never again be able to listen at home to Arthur Rubenstein's, or indeed András Schiff's, performances without a trusty set of nineteenth century ebony & ivory dominoes under your loudspeaker cables.

Sticking to my tried and tested music samples for audiophile reviewing