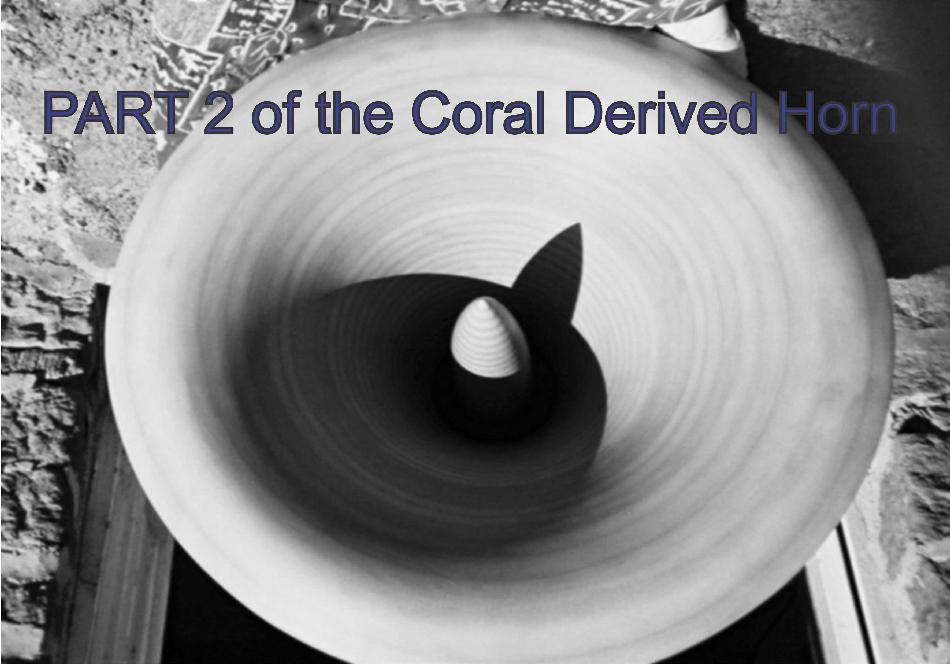 Having proved the design using a 12" Tannoy driver and having a pair of NOS Goodmans Axiom 201 drivers in unsatisfactory reflex cabinets the step to another pair was almost a must. This short article furthers my experiments with the Coral derived horn.

As before the outer panels are 32 mm thick Supawood (dense MDF) and finish is piano black. Again the hardest part are the cut outs required to fit the magnet structure of the Goodmans driver which is very different in size from the 12" Tannoys.
The panels behind the driver this time have a 50 mm layer of high density foam to stop back reflection through the cone. As the Goodmans cone is thinner and the structure of the speaker is very open back reflections are a problem if not damped out. 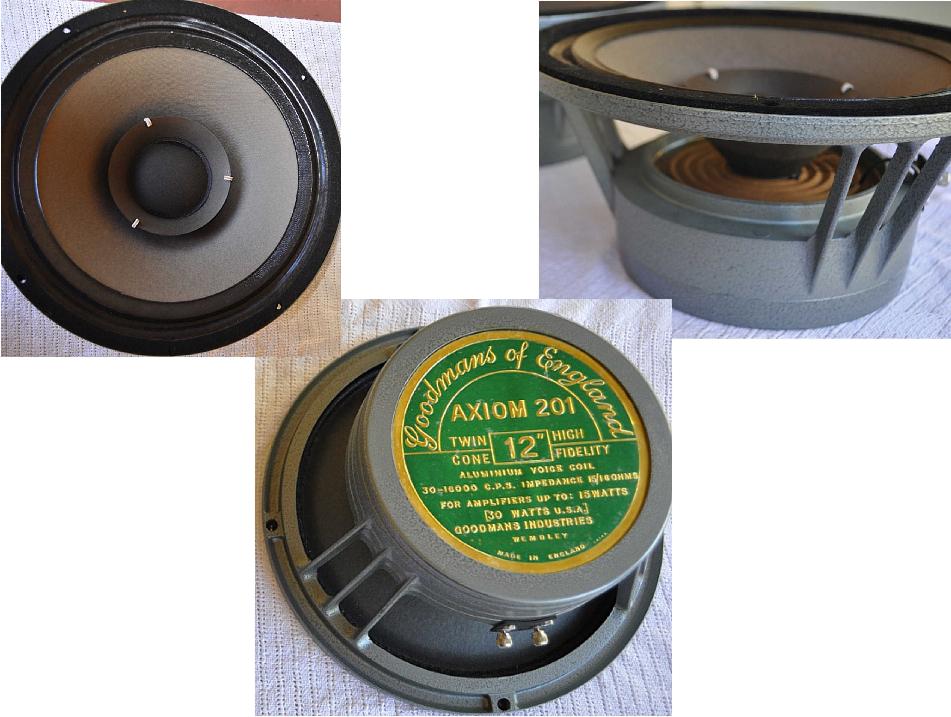 The 201 has a rating of 15 Watts at 16 Ohms (according to the specs: 30 Watts USA) and is extremely sensitive. Figures of around 95 dB are quoted (at 16 Ohms apparently 100 dB). I have owned more than a few pairs of these drivers and they are well near indestructible despite their rating and do not suffer from problems with the surround, ever.

Cone excursion is a total of 20 mm but good cabinet design limits this. In the Coral derived horn the cones only just tremble with less than a couple of mm movement even on loud crashes or bass drum strikes. Which is what should be expected from a good horn coupling.

There have been comparisons between the better class Lowther drivers and the Axioms with the Goodmans being equally transparent, but without the humps in response of the Lowthers and I might add without the bending frames or fragility of the cones and surrounds.

These drivers can still be had via the second hand market at very reasonable prices or more modern drivers could be substituted provided they are reasonably sensitive.

The sizes once more: 1.140 high X 0.470 wide x 0.450 front to back, and again that measurement does not take into account the lip sticking out at the bottom.

There are ring covers for the driver mounts the screws of which still need to be blackened and the light colour wooden cabinet surround is of Jacaranda wood as before. 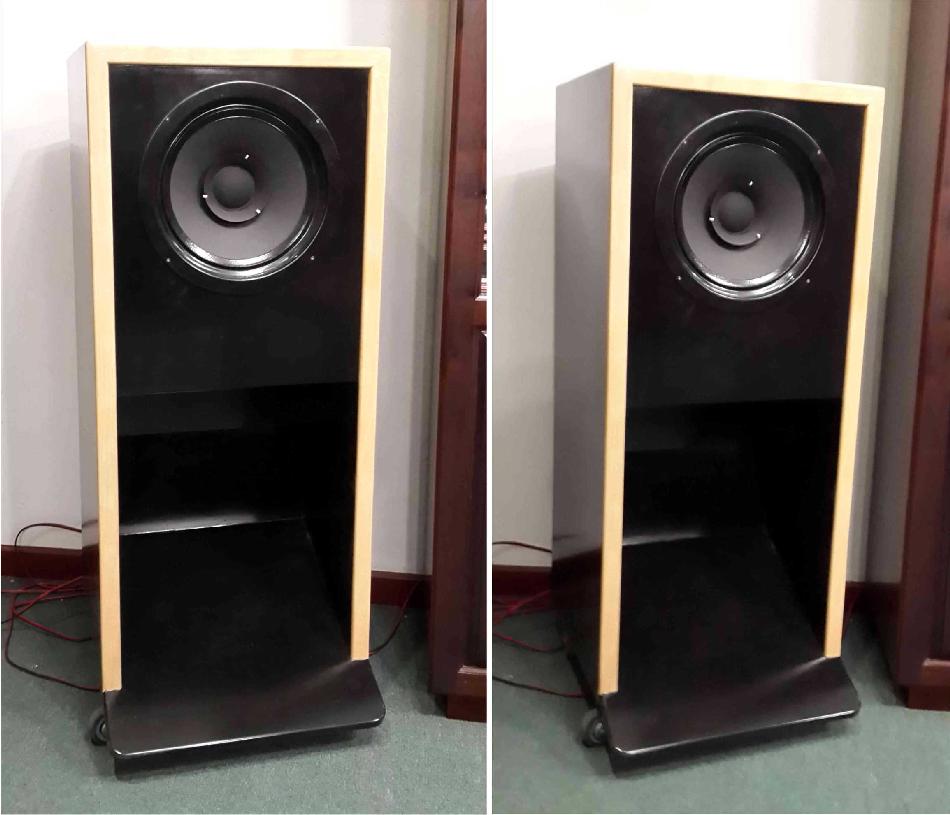 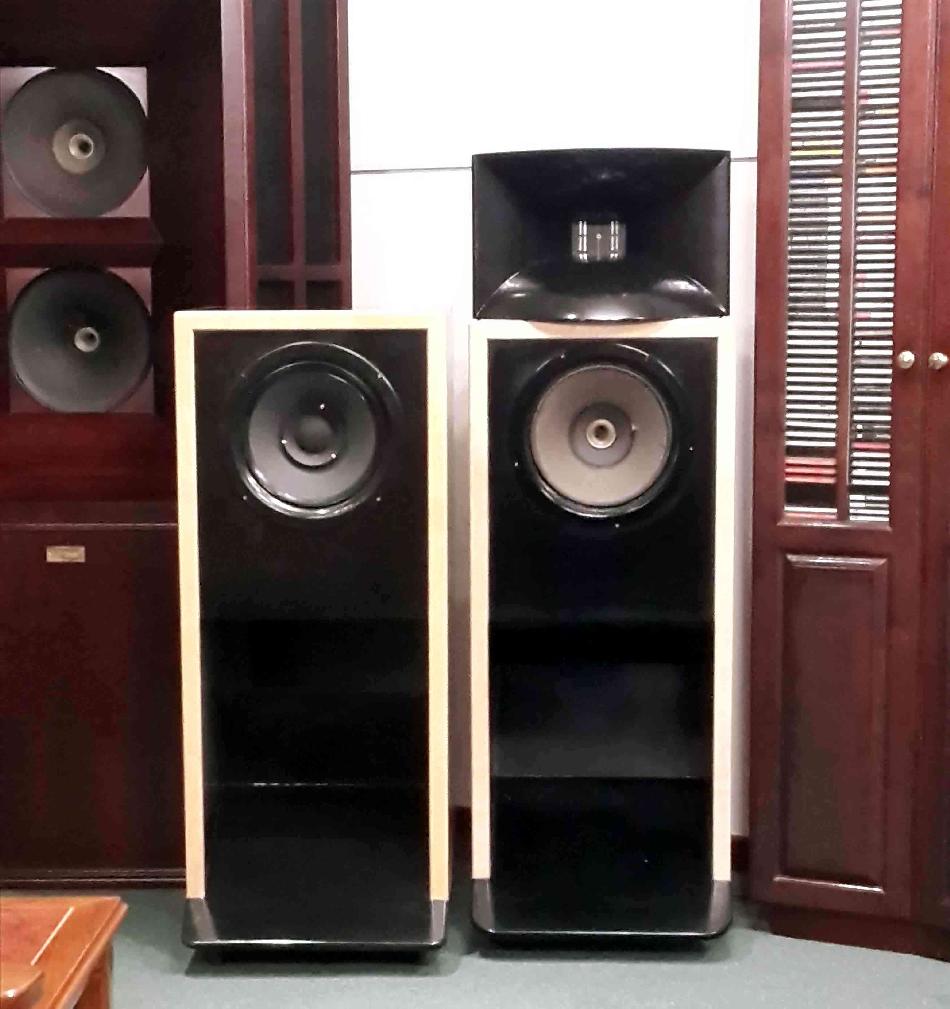 Above is the finished item. The HF horn on the Tannoy uses two EMIT ribbons on the Tannoys, no extra help is needed for the Goodmans. At left rear the Double Autographs horns with two 15" Tannoy Monitor Golds per side.

The equipment used again, is as follows. Shure V15 V with Gyger stylus, EMT 948 turntable with EMT 929 Tone Arm, Jolida Phono Stage, Valve pre-amp and Parallel 300B SET Mono Blocks built by Alan Hobkirk here in South Africa. Maximum power is around 8 - 12 Watts. Interconnects are from LM 240LF coax. Good for up to 5 GHz with a loss of 5 dB per/100 meters at 30MHz so at the low frequency that we use in audio there is no loss worth speaking about. Speaker leads are from twin lead (rip cord), conductor 2 mm sq.

The point of this exercise was the Coral Horns and their design with the modification I applied have worked out better than I could have hoped.
In both cases the scale of the sound is better than most any other speaker I have heard apart from far bigger and much more expensive systems. Both versions throw a sound stage that is wider than the cabinet placement, center to center 4.2 meters apart and because of being horns can be placed against the rear wall which frees up room space.

Both of them reproduce the ambiance of the venue and both image extremely well despite being further apart than what is considered the norm. As an aside my Double Autographs are much further apart and also image perfectly. One feature of horns is that they tend to energize the entire space they are in and most of the time (recording dependent) are hard to localize as actual speakers, rather there is a big wide and high sound field that instruments play in as per live concerts.

Both, again due to them being horns, have transient attack and dynamics that lesser speakers just don't have and are easily in the same range as electrostatics but without the danger of becoming barbecue grids when the volume is cranked up! Rock or orchestra, solo guitar or trumpet, brass band or jazz quartet - you are there!