In Search of Musical Ecstasy!

To borrow a term from the late Dr Gizmo, "Musical Ecstasy" can be achieved only at the expense of sanity.

I must admit to selling my LP collection with the introduction of the CD and later regretting it! The greatest draw card for the CD was undoubtedly the quiet background but as the trade offs became apparent, more and more audiophiles began to hark back to the “good old days” of vinyl. The CD has been around for 30 years now but still LP records offer more musicality and that special something that we all yearn for.

Despite all of the earlier methods of trying to preserve our precious records with Dust Bugs, Parastats and the like, background noise always increased and there was very little one could do to stop the decline short of buying a record cleaning machine and these were only marginally effective at best. There are many who have made up their own machines, some of them very good, but until the advent of the Audio Desk Systeme Vinyl Cleaner nothing that I wanted to try to emulate. The Audio Desk system is both elegant and effective and relies on proven technology.

Ultrasonic cleaning has been around since the 1950's when, like all new technologies, it was expensive and the effects regarded as almost unreal. To quote Arthur C Clarke, “Any sufficiently advanced technology is indistinguishable from magic”.

To put it simply, ultrasonic cleaning consists of immersing the LP in a suitable liquid, switching on the ultrasonic generator for a time and after that, rinsing with clean water and then drying.

The mechanism underlying this process is one in which microscopic bubbles in the liquid implode or collapse under the pressure of ultrasonic agitation which produces shock waves, which when impinging on the surface of the object to be cleaned and through a scrubbing action, displace or loosen particulate matter from the surface. The process by which these bubbles collapse or implode is known as true or vapor cavitation. For our purposes, a contaminated surface, the record, is placed in an ultrasonic bath so that it is perpendicular to the direction of the ultrasonic transducer, and ultrasonic energy is applied, the contaminants in the grooves are withdrawn and replaced with solvent. Formation of cavitation bubbles over and in the grooves provides a strong “vacuum cleaner” action. Trolling the forums, I see concerns about cavitation erosion have been voiced. This I cover later.

One of the problems encountered in ultrasonic cleaning is the very high cavitation intensities that can be produced in water. The addition of a high vapor pressure material such as one of the alcohols, decreases the intensity of the cavitation stress. I avoided Ethyl alcohol and all of it's derivatives on the basis that it would cost more, has a lower boiling point and in the denatured form is full of other contaminants. As Isopropyl alcohol has been used extensively in record cleaning and is cheap I used this in a 25% concentration with water. It is flammable so be careful!

I have chosen to use reverse osmosis filtered (1 micron membrane) water as this is available from my home water system and distilled water would be both relatively expensive and a pain to source.

Detergents can also be used but they would require extensive rinsing. To this end I have designed a rinse/vacuum unit which I will detail after it is completed.

The addition of a surfacant (wetting agent) is always indicated. The one I have chosen is BASF Pluronic 6200 as it has some other useful properties in that it is a

plasticizer, anti-foaming agent and it is used in detergents and cleaners – in the dairy, brewery, soft drinks sectors and also in the printing industry, thus making it readily available and cheap. A little goes a long way and ±5ml is more than sufficient to do the job. 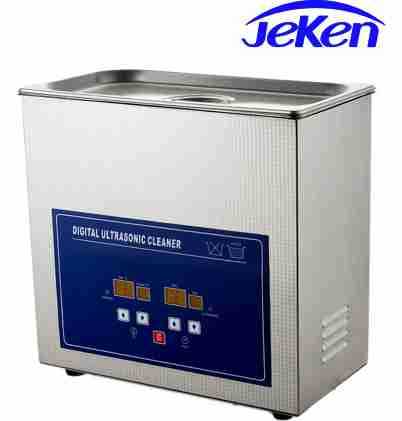 There are many ultrasonic baths on the market, the Chinese versions are the cheapest but take care where you get them. Make sure they can be repaired by your supplier if they go wrong. I chose a Jeken PS-D30(A).

The unit comes with lid and basket.

As seen in the main photograph at the top of the article, a platform was made up to support the vertical struts and large enough to hold the ultrasonic bath. In order to provide firm location, blind holes were machined in the platform to fit the small legs of the ultrasonic bath. The platform was made from 32mm thick, Formica covered MDF. The vertical struts are from African Rosewood and the side and rear edgings are made from Mucqua. These edgings not only finish the platform nicely and as they are raised, stop any liquid that might be sloshed from the bath, to be contained. Because the tank is only just deep enough, a 20mm Perspex surround was attached with clear silicone, to the top rim of the bath and a mounting for the brush assembly fitted. 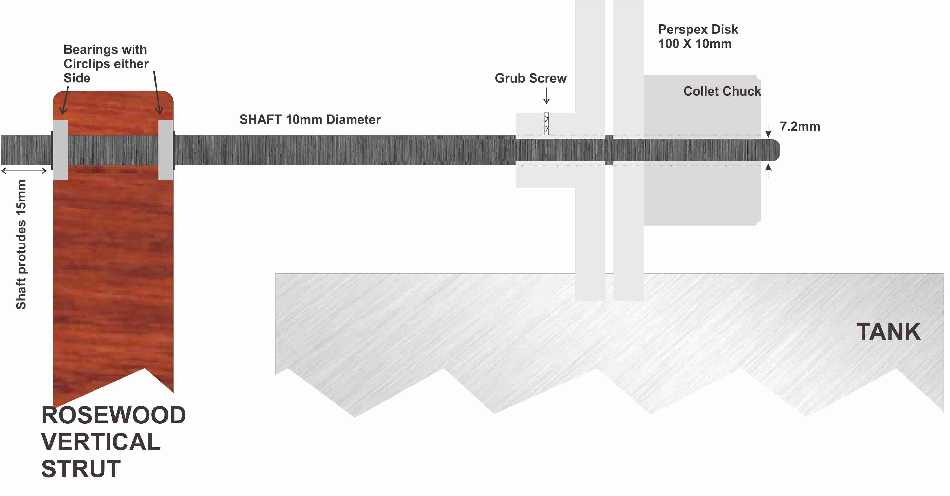 The sketch and photographs explains. A 100mm rod has two bearings that locate through a 40mm strut with circlips on either side. On the drive side it protrudes 15mm and on the other to suit the width of the bath and allow for whatever clamping method you use. I used a collet chuck (from an old 3M tape deck) glued to a 100mm X 100 Perspex disc on one side and a simple grub screw into a Perspex spigot attached to the other Perspex disc used to clamp the record. Not shown is the cork layer on the label sides.

There is a further vertical strut mounted behind the first one for motor mounting which can clearly be seen in the accompanying photographs. The geared motor is connected to the shaft with a flexible tube.

The motor used is a 24 VDC unit which turns at 1 RPM. It draws up to .2 Amps which is about 5 Watts. The power supply is also a bought in unit of 50 Watts @ 24 VDC as it will also power the Vacuum/rinse unit in progress. For safety the supply is remote from the cleaner.

To keep the precise spacing between the two vertical struts then were screwed against a Rosewood block which was in turn screwed to the base. 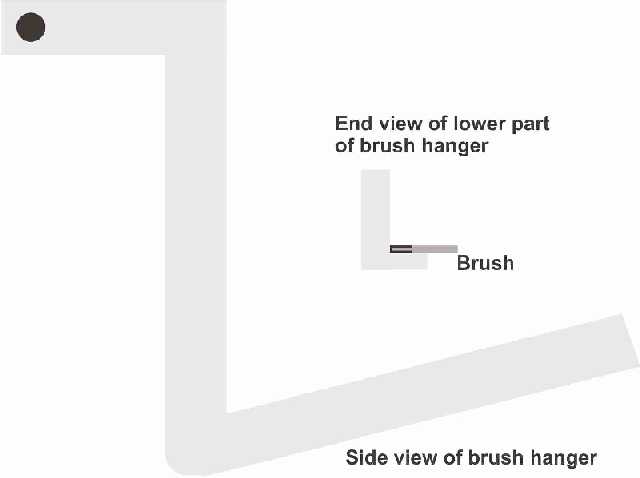 The Audio Desk cleaner has a compact set of rotating brushes that press against the record to help shift debris. I wanted something less complicated and came up with the idea of struts that hinged from the Perspex surround which had been glued on with clear silicone. The method of support can be seen from the photograph on the right. In this pohtograph the unit is in operation and the effects of the cavitation seen as a shimmer.

The shape of the brush struts was determined by cutting a cardboard former to the shape wanted and replicating in 6mm Perspex.

The brush is part of a door draft excluder and glued with clear silicone to the Perspex.

The sizes will depend on the bath size and method of mounting. The brushes are spring loaded against the record and again, the photograph makes this clear.

The initial set-up.The bath was filled with water, isopropyl alcohol and surfacant and allowed to heat to 55° C. This took half an hour. In order to get full cavitation the first time a new bath of liquid is used, the ultrasonics need to run for at least 15 minutes with the water hot. Note that cavitation is best between 50° and 65° C.

The first (old and very much unwanted) record was put into place and both rotation and ultrasonics started. After 6 minutes the record was removed and dried with a paper towel. It is noticeable that the liquid runs very easily from the record and after drying no residue is apparent. The surface was amazingly clean and shiny but as Beatrix Potter is not on my Desert Island list, I dumped it! Next was a recording that was extremely noisy, so much so, that it was essentially unplayable. 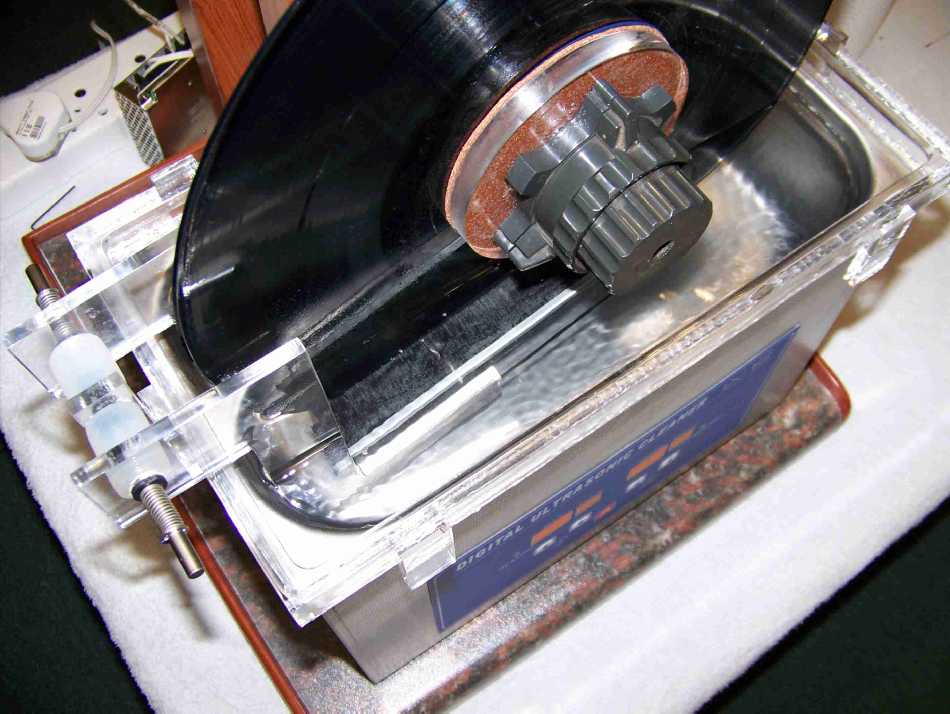 To check for cavitation erosion the unit was run it for 30 minutes without rotation after which another 6 minutes with rotation. After drying and with more than some trepidation, I played it. The clicks and pops and general surface noise had very nearly completely disappeared! There was absolutely no sign whatever, that one section of the record had been subjected to half an hour of ultrasonics. Looking at the record under a microscope also revealed no differences. In fact all that could be seen were very clean grooves.

So having put that bugbear to bed I proceeded to clean and listen to a batch of records.

In every case the surface noise was reduced to almost nothing and this includes recordings that had been cleaned before. I had on loan for more than a year, a VPI cleaner and when the owner had the bad taste to borrow it back, I bought a Spin Clean. Some of the records I have ultrasonically cleaned had been done on both of these machines with mediocre results. After an ultrasonic clean they are as close to noiseless as one could want.

I tried one of my new Mercury (Bach/Starker) pressings and there is a very definite improvement in the detail and this difference is noticeable on everything that has been ultrasonically cleaned so even modern day records suffer from release agent in the grooves.

This has been a very worthwhile project and I recommend anyone to build their own and hopefully to improve on mine.

Happiness is........! Next on the list to build is a Rinse/Vacuum unit so that I can experiment with alternative detergents. Spoiler below. 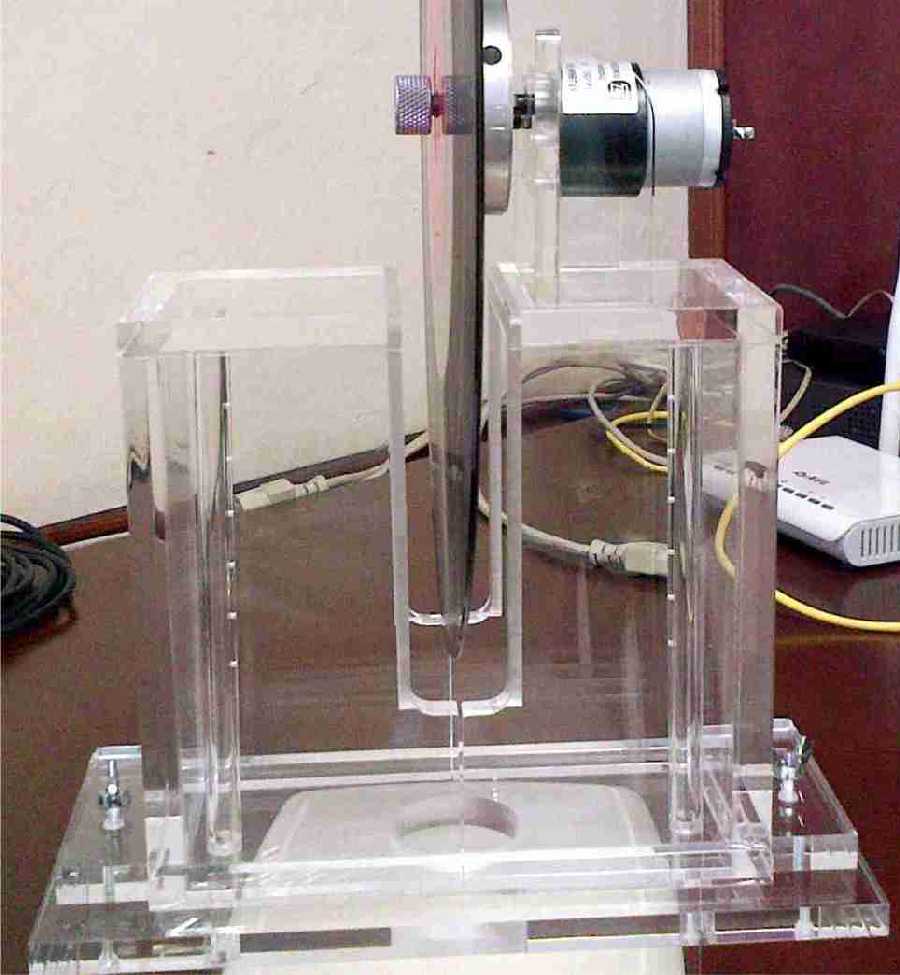