Some thoughts on interconnect design and frequency response

As I worked on the TNT AirCoil DIY Interconnect write up I did a lot of thinking and reading around the question of how the capacitance affects frequency response and how low does the interconnect capacitance really have to be. This is the result of that reflection. 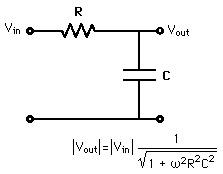 Where ω = 2 π f (where f is the frequency) From the equations above we see that for any given source and cable combination, when the frequency increases to the point where the second term under the square root becomes non-negligible, the voltage (Vout) starts to decrease. However, because the capacitance value is extremely small, (for example 75 picofarads is 0.000000000075 Farads) this typically only becomes a factor at the high end of the audio frequency spectrum.

Some thoughts about hearing

What about the phase shift?

A low pass filter produces a phase shift due to the charging of the capacitance in the circuit and this phase displacement of the signal is dependent on the frequency. Some claim that this will cause smearing of the sound. However, if one does the math, the actual real life delays that could be encountered at 15 kHz are a few microseconds! Can anyone hear that? In his book, Philip Giddings states that “Some research shows that the human ear is quite insensitive to variations in phase.”

An interconnect cable with a capacitance value that yields a frequency drop off of less than 0.4 dB at 17 kHz probably meets the hearing capability for the vast majority of audiophiles. Using the formula shown above, for a source impedance of 600 ohms (my preamp), in order to attain a frequency roll-off of -0.4 dB or less at 17 kHz an interconnect would require a capacitance value of about 5 nano-Farads or less. If the source impedance is in the range of 100 ohms (which is common), then to get the same performance the cable capacitance would have to be less than or equal to about 9 nano-Farads.

The audiophile zeitgeist dictates that no detail is too small or too insignificant to be neglected in the search for audio nirvana. Manufacturers certainly contribute to this mindset with their competition for the consumer's dollars. But if something is inaudible to most humans why do we need to worry about it? Yes, I know, many people argue that removing information in the music signal above the audible range can affect the signal in the audible spectrum, well if one does the math I am sure that can be illustrated, however the question remains; that effect is very far below the audibility threshold so why care about it?

It turns out that it is quite feasible to build a DIY interconnect with a capacitance of much less than 1.0 nanofarad thus resulting in a flat response to well over 20 kHz. See TNT AirCoil DIY interconnect for more info.