How to be an idiot without really trying! 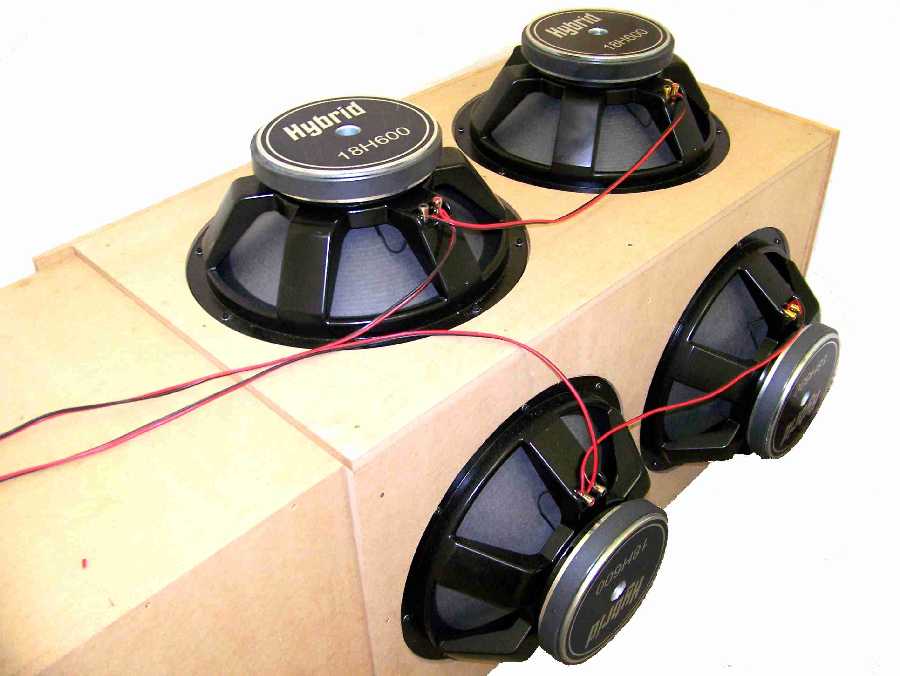 I am an organ buff. From the first time I heard a pipe organ some 50 odd years ago in a Cathedral in Port Elizabeth, South Africa, I knew that this was what I wanted to listen to. Years later I was introduced to a Wurlitzer pipe organ in a home in Benoni which had come out of a large cinema in Johannesburg when movies with sound came along. I spent quite a bit of time in the pipe chambers just looking and joy was the owner playing it for my benefit.
The organ finally passed into the hands of a church in Randburg, Johannesburg, was halfway installed and then sat there rotting for 30 years! This was the biggest Wurlitzer in South Africa.

My system has been designed around reproducing organ music so excuse the frequent dips into that instrument for explanation!
The picture below is for interest only, of the instrument as it is now.

The bass drum can be seen in the middle picture and on the right some of the "Toy Shop", bells, cymbals, whistle and so on. Very important for the theatre organ types!

Enough of that and on to the challenge of reproducing organ music with a home stereo (Real Stereo).. To start with one has to forget most of the usual small scale speaker systems. Electrostatic speakers turn into barbeque grids and the average small speaker can't cut it either. Sure you can get an idea but for as close to the real thing as possible the ability to move air is paramount. Wanting to reproduce the organ presents some problems not found in most other music.
Extreme dynamics, very strident pipes contrasting with very soft and mellow voices, an extended frequency range at all volumes and various sounds that are peculiar to the organ all need to be brought into the listening room. I measured, in my room, with an organ of 2,500 pipes, 106dB @ 6 meters with the electronic 32' voices switched off, so this is what I aimed for.

To get the sound volume to this sort of level without distortion or any straining entailed using horn loaded cabinets with 2 X 15" Tannoy dual concentric speakers per side, plus high efficiency ribbons for the tops and a humungous sub-woofer. The main cabinets are around 100dB / watt as are the special ribbons.

I looked at the El-PIPE-O of Nelson Pass and to plagiarize a saying, saw that it was good and proceeded from there. I lengthened his design a bit and used the speakers I had, 3 X 15" speakers driven with a 250 watt mosfet amplifier. The amp got very hot and blew fuses. I don't even want to know the load I was putting on it! All I do know is that at one point one of the speakers started to smoke, but it went down far enough, almost. However the arrangement I used did what I wanted to tone wise, so it made sense in my mind to upgrade to something bigger.

Enter the monster below. 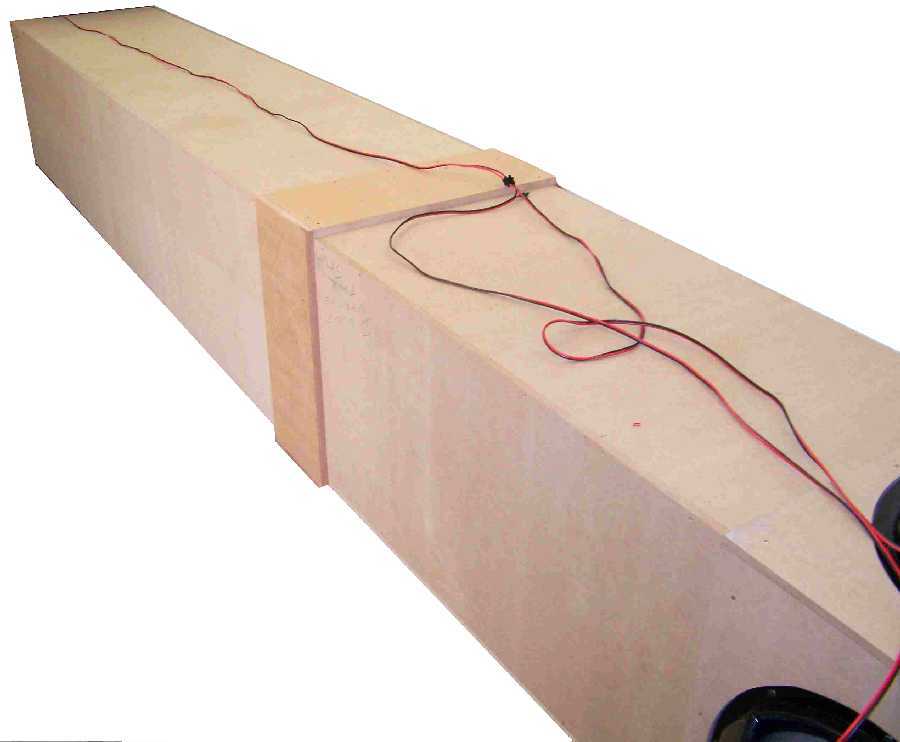 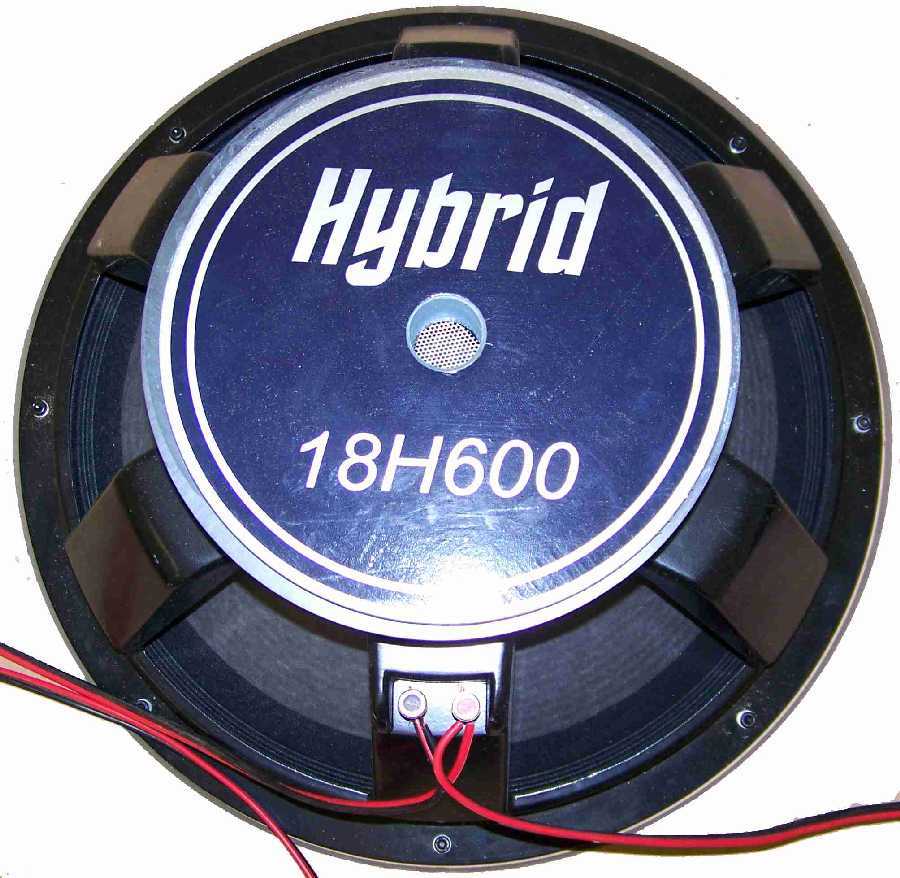 These are constructed from 20mm Supawood except for the driver end when the thickness is doubled to 40mm. Tube size 600mm X 600mm X 6 meters long. The drivers are 18" rated at 600 watts each, with fairly stiff surrounds as the last thing I want are flapping cones. Sensitivity of the drivers is quoted at 96dB, with die cast aluminium basket and 100mm voice coils. As I am a heretic, they are cheap import (China) units as I don't believe there is any advantage to be gained using really good speakers at very low frequency. The crossover has a variable cut off and gain

As the Tannoys are supposedly flat down to 20Hz (-3dB), the sub is designed to come in around 25 to 30Hz and go down from there and still give adequate output at 8Hz. By adequate I mean it sounds and FEELS like organ bass.

Other than stuffing a half roll (6 meters X 1,5 meters X 50mm) of Dacron into the open end no attempt has been made to damp the insides of the tube. The open end of the sub feeds into the listening area to the side of the left-hand Tannoy. Please find the simple construction schemes in a separate article.

The listening results are startling and everything I hoped it would be. Having listened to endless recordings of organ on LP, CD and server, I also went to a recital to try and fix in my mind thevolume balance needed. Then I came home and increased the gain! So far, I am as happy as can be. Forget the usual rumbling one note bass from the average sub-woofer, at these frequencies every single note is as distinct as listening to the real thing.
So much so, one can distinguish what stop is drawn at any time and this alone is a huge feat.

On an organ a Violon pipe sounds stringy, a Bourdon sounds totally different to an open wood (and variations on Bourdons as well) and a harmonic bass is heard at the right level relative to the fundamental stop.
Some of the big flue basses are slow to start, some have "helpers" some flutter as the start to speak. All this can be heard. Soft and very low notes have a breathy quality and the sound of the wind moving past the lip is also discernable.

Obviously the harmonics of the pipe, reproduced through the main speakers help with the above, but unless you can move a lot of air with the sub, much of the real sound and feel of organ bass is missing. Very low bass is omnidirectionalbut in reality there are always cues in music. Stand in front of an organ and you will certainly hear where the low bass is coming from.
The fact that there is only one sub is not important as instruments are harmonic things and the harmonic mix defines the instrument. The higher harmonics give directional clues to the siting of the pipe in the organ and this follows through in the recording.

To my way of thinking another necessity in any part of a speakers system, is that it sounds relaxed by which I mean nothing sounds strained but rather is as natural as possible. The words open and transparent are almost meaningless to me. I want the original sound if at all possible and if not as near to it as I can get. Finally I can not actually distinguish when the sub is working as it blends so well. 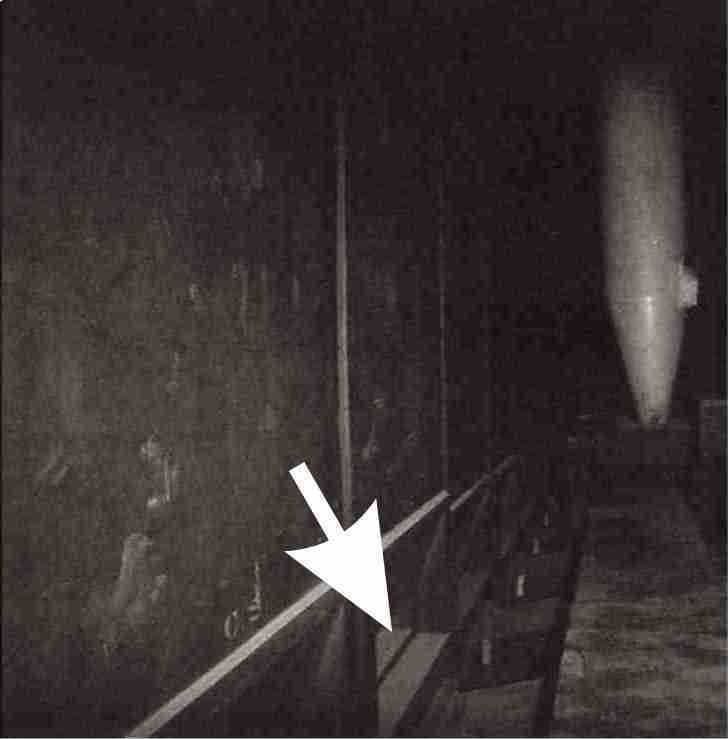 A few facts about organ bass. The fundamental pitch of the organ is 8' = 64Hz. 16' = 32Hz (normally near the bottom range of a sub), 32' = 16Hz and 64' = 8Hz. There is a digital organ with a 128' = 4Hz stop and the bass on that is reproduced by a Rotary Sub-Woofer. While I only know of a few organs with actual 64' stops there are many with 64' acoustic basses hence the need for reproduction down to these frequencies. 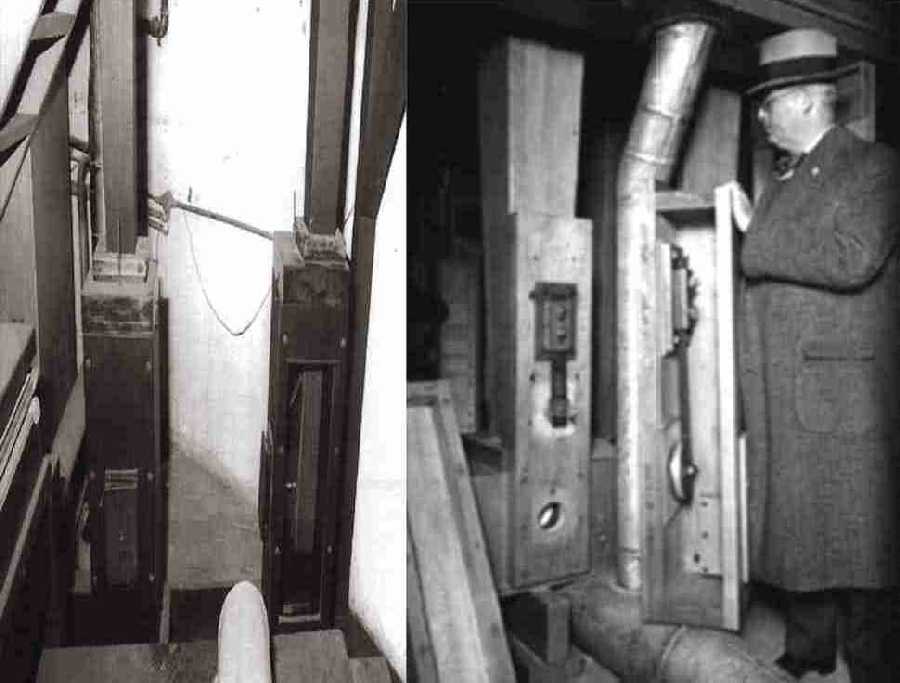 The quantity of air moved by a large basspipe is huge so as to give an idea of what is involved here is a picture, on the right, of the mouth of some Open Wood 32' pipes. The arrow points to the air way which seems to be 10 to 15mm wide. This is a very large scale pipe. Contrast this in your mind with a small pipe which is the diameter of a pencil and 20mm long! The whitish pipe in the background is probably a small scale Open Metal pipe. The organ is that of the Sydney City Hall.

At left are two examples of 64' Reed pipes. Very different scales (look at the horizontal wind trunks) and the tubes coming out the top of the blocks. On the right, the Sydney Town Hall and on the left the Auditorium Organ at Atlantic City which is the largest organ (33,000 pipes) in the world and designed to fill a 13 story high space that can seat over 40,000 people by the man who appears in the picture. Senator Emerson Richards.


This then is my take on a sub-woofer built to reproduce only the very last bit of the lower audible range of an organ. Must be mad!