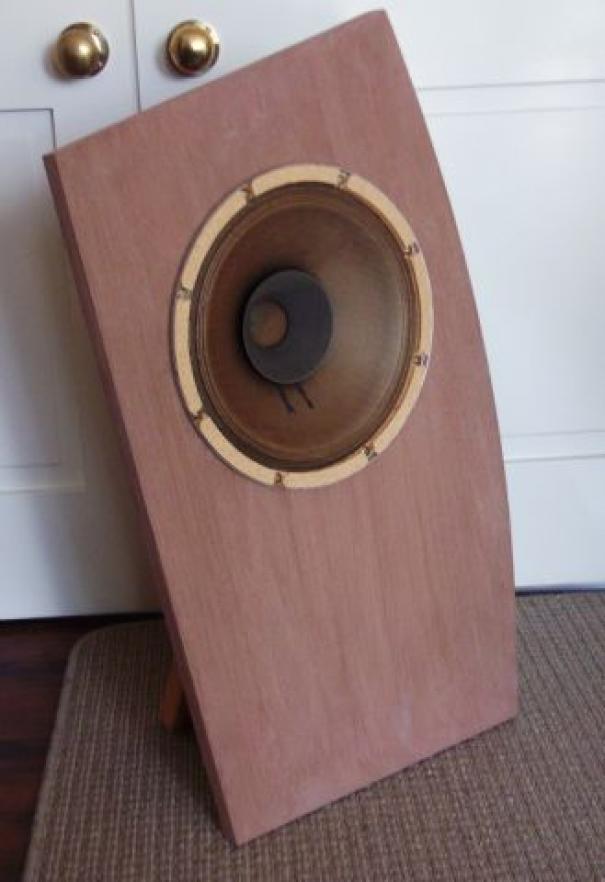 I have called my latest frugal speaker project the SOB_FR Mk II - simple open baffle full-range speaker. The term "sober" can mean thoughtful, clear-headed, restrained, pragmatic, and dignified! This time I used only wood from my workshop off-cuts box. I recycled the shelves of a scrapped coffee table, re-mounted the drivers, and hinged the unused end from my Scanda shelving unit as a stand. The paint job is by Mrs RJV. The result is a full-bodied, open and detailed soundstage, and I'm liking that a lot! Could it be the wood that made them sound so much more musical - or the size and simplicity of the baffle? Or even the brass mounting screws? I think it's the relationship with the room. 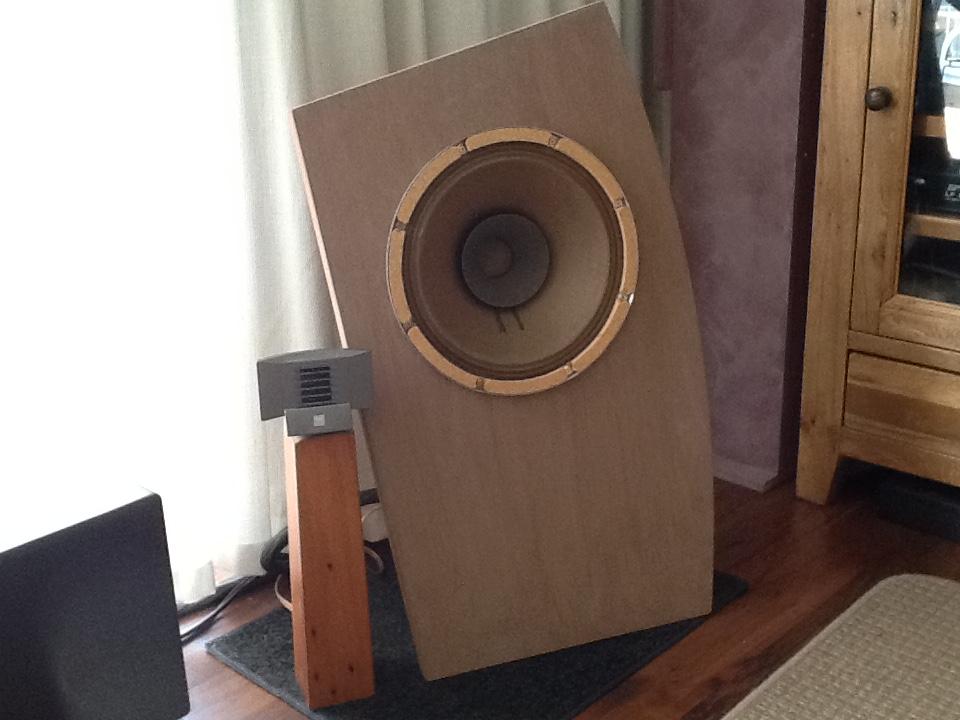 In part two of this project, I've added BATPro 2 super-tweeters from Taket Inc. (in Kanagawa, Japan) to see and hear what happens when I extend the response beyond audible hearing (if I run the BATPro2 alone, I can't hear anything!).

There are many super-tweeter options costing from $10 to $1500 and beyond - I am aware of dome, cone, Heil AMT, planar magnetic, electrostatic, horn, plasma, and piezo-electric forms. Several have been reviewed by TNT-Audio. Are they a silver bullet for music enhancement? Some claim to enhance both mid-range and low-range response as well as the expected high-range, and I'd heard that the effect of adding a super-tweeter to a full-range speaker as likened to adding salt to food, in that the ultrasonic range beyond 20KHz opens the sound field to be more realistic and airy.

In search of an easy cost-effective supplement to the full-range drivers, I was kindly provided on request with review examples of the BATPro2 add-on supertweeters by Mr Toshitaka Takei at Taket Inc. The BATPro2 is one of several super-tweeter and woofer "hi-definitioner" units designed and produced by Taket Inc. which are used by simply adding them onto the main speaker or headphone connections. They radiate sound by a piezo-electric polymer vibration board which is shaped like a soundwave. The claimed response range is 18 KHz to 150 KHz.

I think the best-known super-tweeter design is the Heil AMT, produced under a number of brand names. I was intrigued by the Taket claim that their piezo-electric design improves on the effect of a Heil driver. The Heil driver uses a totally different method of reproducing the high frequency sounds than does the more usual dome or cone. A large corrugated membrane is driven from its edge so that its folds move the air. It doesn't require a huge coil, and it can be built so that its resonant frequency is outside the frequency band it needs to reproduce. For example, the Oskar Air Motion Transformer (AMT) operates in the range 700 - 23,000 Hz and is inherently bi-directional (it was invented by Oskar Heil, who also invented the field effect transistor (FET)). If interested, you can find more explanation of tweeters, super-tweeters, and AMTs in several Wikipedia entries.

The unique design feature of the Oskar air velocity transformer (AVT) which distinguishes it from all other speakers is an extremely lightweight diaphragm, folded into a number of accordion-like pleats to which aluminium foil strips are bonded. This addresses fundamental problems of 'massy' domes etc., such as intertia, and flexing and self-resonance (added to the musical sound produced). The diaphragm is mounted in an intense magnetic field and a music signal is applied to the aluminum strips. This causes the pleats to alternately expand and contract in a bellows-like manner in conformance with the music signal, forcing air out of the pleats and sucking in on the other side. The air movement is 5 times bigger than the movement of the membrane, therefore the velocity must be 5 times bigger, and high air volume acceleration is achieved. The total moving mass is about only 1 g, so it is an almost perfect transducer system. The AVT (AMT) multiplies (transforms) the air motion by a factor of 5.3 and is, therefore, appropriately called an "air velocity transformer".

The ESS Heil AMT (reviewed by Mark Wheeler in May 2011, including a more detailed explanation of the principles and practicalities of operation - see here on TNT-Audio) is 150 x 150 x 110 mm and baffle-mounted, whilst the Taket BATPro2 is 130 x 100 x 80 mm and sits on soft pads, designed to be placed on top of a cabinet. This is a tricky issue for my open baffles, so my super-tweeters are sitting atop short posts alongside the main drivers.

One problem that can occur when adding a super-tweeter is the disruption of a speaker system's designed sound pressure level profile. The added super-tweeter will change the sound pressure level (SPL) of the main speaker if it has enough sound pressure under 20kHz. So you will feel the change of sound at the first audition and you may find the sound produced to be dull or shrill and odd around the overlap. The Taket design has swichable SPL for matching and cuts the frequency response under 20kHz as much as possible by physically adjusting the pitch and the depth of the waves of the vibration board film. In addition, a low frequency region is cut electrically with a capacitor. Thus, the SPL of the main speaker system under 20kHz is not changed when the BATPro2 super-tweeter is added. It approaches an ideal super-tweeter that adds only sound above 20kHz.

Why does such a low level SPL give the change of sound quality? This is explained as due to the BATPro2 performance charactertistic. Sound is produced immediately and fluctuates instantly. Such micro starting parts of a sound is missing in ordinary speakers becuase diaphragms can't physically move in this way due to interial mass and flexing. Further, a supersonic wave over 20kHz delivers the reality of the sound. For accuracy of music reproduction, it is better to differentiate between the steep element which exists only in the starting point of a sound and the high frequency element which can be detected as a wave. The steep element of the starting point is not cut and remains, even though sound over 20kHz is not recorded on a standard CD. Mr Takei, the engineer and principal at Taket, thinks this steep starting element of sound contributes to make the fine sound, the wide soundstage, and the realism of reproduced music. Taket-designed products might change the sound only a small amount, but it is the very important part of the sound needed to feel music reality which is missing in ordinary speakers, headphones and other efforts at audio improvement.

My projects have resulted in an affordable, satisfying and enjoyable music reproduction experience. I've learned that good full-range drivers running as simple dipoles produce more natural/musical sound in open baffles than in cabinets. Small full-range drivers work very well but when recycling old units make sure that the coils are not rubbing (metallic grating when the diagphragm is moved) and the cones are not torn or mechnically damaged or worn, especially around the perimeter, and metal frames are not bent, rusted, etc. Small drivers produce open sound, but they lack low bass response, so augmentation is needed - some DIY builders add a bass driver on the baffle. They create an airy wide soundstage with clarity, but can be sensitive to placement in the room, usually performing better when sited well away from walls. The 'listening space triangle' is very helpful concept to realising an engaging soundstage - separate your speakers by the distance to your listening position, then move them a little further apart for optimum enjoyment.

Larger drivers - e.g. 12" - lack high frequency response beyond 12-14Khz or so, hence they need a super-tweeter supplement. The Taket BATPro2 is an effective and unobtrusive and reasonably priced (60,000 Yen) add-on that opens full-range driver sound. In combination with the sub-bass driver and super-tweeters, the Philips drivers sound very full and solid, yet airy and realistic. I have not agonised over measured performance, rather I've been luxuriating in lots of listening pleasure. I went the no-nonsense 'back-to-bascis' minimalist route - and it works for us. I would not go back to boxed speakers - I have a frugal hifi music experience now, so what's next? I'll go back to my growing Pinterest board project collection and www.homebuilthifi.com for inspiration.

I am struck by the "listening instruments" description of their range of speakers by Tetra of Ottawa. There is no need to pay over the odds for trendy brand names. It's well worth fostering a nose for likely hidden gems. I also encourage you to develop a willingess to experiment - complicated designs don't always produce good musical performance. And sometimes vintage is better than new.

Great things might have been accomplished at great expense - but remember this was intentionally a low/no budget journey I embarked on. In the pursuit of engaging music experience at home I wanted more than expensive furniture - sometimes speakers look better than they sound, sometimes sound better than they look. Some music listeners buy speakers as sculpture/art, others to match or contrast with decor, others as a statement of fashion, taste or technical appreciation. Some speakers are supposed to blend in, or to stand out - to be seen "in your face", or to "disappear" in the aural experience.

Driver mounting has problems. Cone excursion differs markedly among closed boxes and open baffles, and this is an issue of linearity and loudness (efficiency and sensitivity). Is the driver designed for use in a cabinet? If so, its performance on an open baffle may be unsatisfactory. Full-range drivers are usually designed for open baffles. The Philips driver seems eminently suitable for such experimentation. And maybe I just struck lucky in the integration of the sub-bass unit, the main full-range drivers, the super-tweeter, and the room and furniture layout. But it works! I haven't measured performance - but the sound is right for me.

In my experiments to reclaim and repurpose vintage full-range drivers artistically - for musical pleasure - I have enjoyed the journey, learned a lot, and found an outlet for my technical accomplishment (my wife politely calls it "tinkering") and artistic expression. My wife likes the KEF iQ7s but not the JE Labs big baffles. She loves the 'coffee table' speakers we've now been listening to for a few months. Result, I'd say! Now I'm pondering the possibility of finding some cast-off drivers and another project, preferably at even lower cost. I've become a fan of vintage drivers, and they are in short supply in New Zealand, especially in very good condition (new old stock), but I know there are many languishing unloved in dens, workshops, garages, and second-hand and junk shops. As I write, a pair of the Philips AD 1256-M8 are being sold on TradeMe and are currently at $23! Hunting suitable drivers out is part of the challenge. Putting them back into the service of enriching musical experience is part of the joy of my hobby.