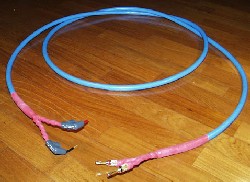 The Star version made here (renamed Star Power in homage to Sonic Youth) is based on the plan exposed on a previous article of TNT to which I have made some modifications -more aesthetical than functional- and therefore the costs have increased a little. The value of this DIY cable is comparable with some "HI-FI boutique" cable well over $3 per meter.

The Star I built consists of a quadripolar copper shielded cable.
The single conductors of the cable have a 2.5 mmq section and the cable is not so difficult to find. However, there are cables of larger sections that are much more difficult to find and more troublesome to use, not much for the assembly than for compatibility (and the costs too) with the connectors available in the market and the common binding posts of the "average" amps and the speakers.

For those who think that 2,5mmq is too large of a section, the cables with a smaller section are easier to find and they cost less, but I rather will not go under 2mmq.
The external insulation comes in different colors, the most common are white, black, blue and orange. As the picture shows, the one I used is a beautiful electric blue.
I suggest you to address to industrial electrical components sellers, because they usually have lower prices and offer a larger choice.

I built two pairs of these cables because my speakers are the ESB Stage One (a system composed by two satellites and a subwoofer). For the length I stood on the classical 3+3m.
I decided to use connectors instead of bare wire and to finish each end with a heatshrink both for improved aesthetics and in order to reduce the oxidation of the conductors exposed to the air.
The choice of the connectors has been forced exclusively by the kind of binding posts on the amp/sat/sub. The amp (a Luxman A-215) provides "to lock" the connectors and it does not allow the use of spades, only bananas with small section (not always easy to find) or bare wire; with the subwoofer it is possible to use nearly all kind of connectors in the market, including spades (only the larger kind).
Finally, the satellites still have the old "guillotine" system connectors and therefore they have the same restricted choice as in the amp (bare wire, small bananas, no spades).
After long researches and evaluations of different possible solutions I decided to use the banana connectors for the subwoofer and the Audio Technica AT6104 (OFC 24K gold plated) for both the amplifier and the satellites (see images). 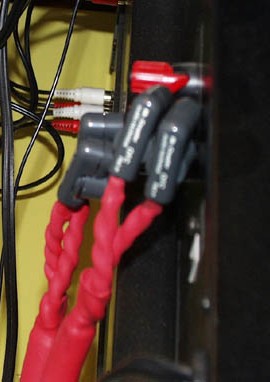 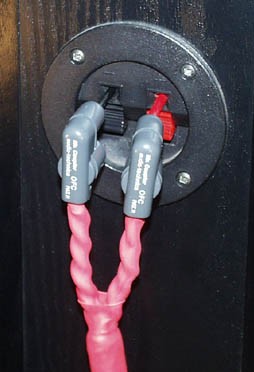 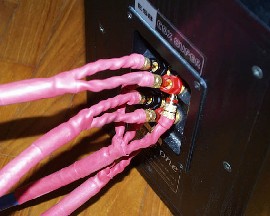 My experience suggested me to use "lock" type connectors for they are easy to recycle in future applications when the cable becomes obsolete.
If you think it is unnecessary to finish the cables with cheap connectors (and I say cheap for there are much more expensive than those described here), I suggest at least to "tin" the twisted poles, better if with solder with a good percentage of silver.
Last recommendations, if your speakers are on the light side and standing on little fixed stands, if you have decided for a large section cables and if this remains hung on the speaker, pay attention to possible risks (yes! the fall of the speaker pulled by the cable).
Finally for those who have recently started with DIY (just like me), buy a little more cable than you really need, so you're allowed to make all the necessary tests before the definitive "release", half meter more is enough. Do the same with the heatshrink.

The prices, the quantities and the components that follow are peculiar to my solution and however they can change on the basis of the preferences and of what is possible to find.
Also the prices are merely indicative because there are substantial differences between different sellers. Probably you have yet the necessary tools: a pair of electrician scissors and a lighter.
These are the only essential things. The electrician scissors are necessary if the cable has a large section as in my case. The lighter serves to melt the heatshrink quickly. For those like me, those who use the heatshrink for the first time, take care heating it, use just the blue part of the lighter flame otherwise the rubber will quickly become black.
Moreover, if you can find it, I suggest to buy half of the 100x9.5mm heatshrink quantity of a color and half of another (e.g. red and black), I have unfortunately found it only in red.

How do we make it?

Let me say that the listening test has been made without breaking-in (I was anxious to see the result obtained), the differences have been quite impressive! The comparison has been done with other cables, similar to the Audio Technica Mr. Cable. The test has been done only with a digital source, Technics SL-PG200A, without any particular upgrade, in order to see if also in worse working conditions, the benefits of the cables were audible. Well, despite all this, also the most "distracted" ear could perceive the difference.
Being aware of the performances that I would have obtained from a similar cable, the choice of the software (music) has been simple enough. I used tracks with large amounts of powerful and deep bass, voices and classical guitars, omitting tests about dynamics that however would demand more attention (given the level of the chain). The CDs, among others, were "the ame electrique" by DIE FORM and "Thunder perfect mind" by CURRENT 93.

The Star, compared to the cable previously used, has a greater definition of the bass range, which turns out to be deeper and richer. The scene seems also to be more focused; "the amalgam" effect of the instruments in some passages, that could be listened with the old cable, seems to be diluted transforming itself from "amalgam" into details.
The single instruments seem to have a more real timbre (or less "artificial"). In the high range the StarPower is a little limited, not as definition (that in my opinion is however superior than its predecessor), than in brilliance. However in the chain in which it has been tested, it has a sweeter voice, less aggressive than the previous cable.

Finally the performance/price ratio is indeed amazing, I would have never imagined that with a so simple of a geometry and a not excellent quality of the conductors I could have obtained these tangible results.
According to me the Star is an optimal point to start for anyone, like me, who has recently started the neurotic research of the ideal cable, and thanks to the Star I can take a rest and enjoy its quality given the results ehich I have obtained.
This does not mean that the Star is the best power cable ever made, but given the cost and the easiness of its realization it reachs, according to me, the advanced performances of cables of equal level. Try to believe.