CD against LP against streaming. In UK the winner is... 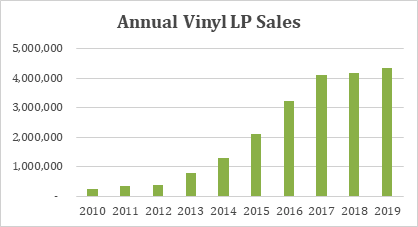 In Europe, the British market has always been a kind of reference, both for music and HiFi sales. Their well established tradition as music lovers (and “makers”) made the UK consumers a kind of trend-setters.

For this reason it is enlightening to analyze the music sales report which has been recently published by BPI, a.k.a the British Phonographic Industry. This report, that can be downloaded directly from the official BPI website (the link points directly to the report) compares music streaming, downloads and different physical media (CD, LP, Compact Cassette).

Comparing what's happening today to the situation as in 2010, ten years ago, many things have changed quite dramatically. Back in 2010 three quarters of music sales (and, hence, music listenings) were based on physical media and just one quarter was relying on download/streaming. At the end of 2019 it is the other way around: three quarter of music sales (74.4%, to be more precise) is based on streaming (not download, just streaming)!

The remaining part of sales is dominated by, guess what?, CD! Yes, despite vinyl sales constantly increasing (+4.1% with respect to 2018 and a whopping +2000% with respect to 2007!) the total number of LPs which have been sold reaches 4.3 million units. On the other hand, CD sales dropped by a significant -26.5% but, with some easy calculation, we can deduce that the number of CDs is still around 22 million units, more than three times the number of LPs!

Well, the CD seemed doomed to an end, but it still sells quite well. One of the reasons is the price of a CD, which is way lower than that of an LP and, moreover, CDs are much easier to find.

There are other interesting aspects that emerge from the BPI music sales report:

Summarizing, it is clear that physical media are suffering from the attack of streaming, while CD is still the preferred physical medium by UK customers. The future of physical media is doomed, though, since streaming is becoming mainstream even among audiophiles, thanks to the hi-res files that are becoming more and more available.