and apparently crappier too, according to new research 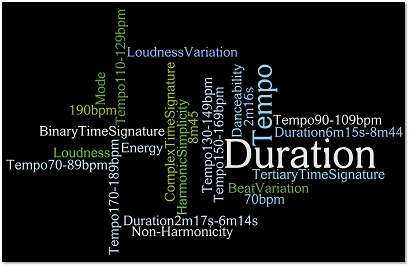 Product: Recordings and CDs and MP3 files
Manufacturer/distributor: most of them - from most countries of origin
Approx. price: your ears and your listening pleasure/pain, but (YMMV)
Availability: official distributors, online stores, torrents, etcetera
Author: Mark Wheeler - TNT UK
Reviewed: early 2012

As 2011 drew to a close, academic evidence was published which further supports our view here at TNT-audio that recorded music is having the life squashed from it by squashing its peaks so that its overall level seems to be louder. This has long been policy in the world of popular music singles to ensure that your product stands out when played on the radio. It is the same reason TV adverts are so much louder than the movies they interupt.
"Surely everyone starts saying this as soon as they pass their 40th birthday" challenge plebs, stage left.

Bristol University, a UK institution with a fine reputatiion for research, hosts the Intelligent Systems Laboratory where a team of researchers led by Dr. Tijl de Bie (Senior Lecturer in Artificial Intelligence), examined 50 years of the UK Top 40 Singles Charts (formerly The Hit Parade), measuring various parameters and correlating the results against sales performance. They tried to identify what distinguishes a smash hit single with a bullet, that reaches the top five, from runner up songs that peak between the 40 to 30 positions. The researchers defined 23 parameters, which included:

"Loudness" is defined here by a combination of objective factors that the researchers hope will provide a good analogue for the subjective experience of what seems louder than something else. The subjective equivalent of turming the volume up to number 11! The complexity of time signatures, and whether they are even numbered (Dad dancing hopping from foot to foot, or youth throwing shapes) or asymetrical (demanding proper coordinated dance steps like a Waltz). Tempo is more easily defined defined in Beats Per Minute (BPM).

The 23 parameters were quantified and assembled into an equation that they claim displays a 60% accuracy in predicting whether a song will make it into the top 5 in any particular week's chart. This neatly controls for the massive decline in sales that means a modern hit can reach Number 1 today with sales that would only have reached the lower reaches of the chart decades years ago. Trends also become apparent through the results, for example, slow tempos (below 100bpm) were more likely to be hits for 80s synth pop compared with post 90s dance/house/trance boom where tunes could exceed 140bpm. Songs with constant tempo do better in any era. However, generalisations like this do not allow for every eventuality (hence the 60% accuracy) so the 1969 Fleetwood Mac number 1 hit Albatross is predicted to be a miss by the equation, while the 1970 Elvis Presley number 2 hit Suspicious Mind would have been forseen.

Your old scribe has long declared "the eighties is the decade that music forgot", a soubriquet that has been taken up by other commentators but which is contradicted by this research. In the 80s tempos of 70-89bpm were commonly hits and variations throughout the decade were wider than any other decade. The 80s began with Pink Floyd's Another Brick in the Wall topping the charts and other notable landmarks included Frankie Goes to Hollywood's Relax being early masterpieces that stand out in an otherwise dull decade including Jennifer Rush's turgid The Power of Love as one of the two bestsellers of 1985. The charts were hardest to predict hits at the beginning of the 1980s and offer this as evidence for that decade's diversity. However, your old scribe would argue that the impeccable retro pop of The Jam, the Two Tone ska revival, the post punk Police and equally post punk Adam and the Ants were products of the seventies. 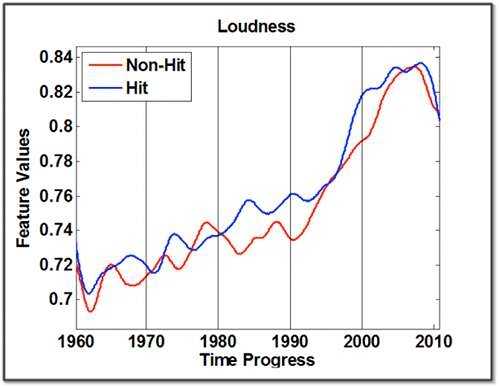 Of particular irritation to TNT-audio readers is the key finding that, "On average all songs on the chart are becoming louder. Additionally, the hits are relatively louder than the songs that dangle at the bottom of the charts, reflected by a strong weight for the loudness feature." Although the summary descriptors are different, effectively this was measured by analysing the dynamic range and certain elements of the song's 'noise'. The compression being proportional to loudness has long been the complaint of TNT-audio. This reserach confimrs that the problem is getting worse.

Furthermore, harmonically simpler songs were more likely to be hits than more sophisticated tunes, especially in the early days, where it does seem the adage "Sing Something Simple" held sawy. The title of the seventies rock show "The Old Grey Whistle Test" referred to an old, possibly appochryphal practice of playing new recordings to the doormen and runners (the eponymous "old greys") to establish whether a tune was memorable enough to be whistled convincingkly after 1 hearing. Where the Bristol research breaks new ground is that many previous bstudies have attempted to identify a formula for formulaic pop, but this is the first study that has succeeded with this degree of accuracy - 60% prediction rates for hit potential. The bristol research used "the time-shifting perceptron to account for evolving musical taste".

Matt McVicar, a PhD student in the department, presented this at the 2011 4th International Workshop on Machine Learning and Music: Learning from Musical Structure held in Spain in December 2011. For TNT-audio readers, the excitement of what is a fine piece of academic research is tempered by the depressing realisation that the Dyonisian qualities we so love in music (and its good reproduction) are being so subjugated to certain too predictable Appolonian qualities. Audiophiles must not become like the infant losing their omnipotent fantasies as they realise they are not the centre of everyone's universe, but celebrate the independent record lables who strive for musical diversity reproduced with audio excellence.

It is possible that the increasing homogeneaity will prompt more independent companies to produce more diverse music, better recorded. The same market forces that lead to the routine description of music as 'product' should also drive smaller more adaptable companies to meet the demand for well recorded interesting music. That demand comes from people like TNT-audio readers who are familiar with effective replay of the pantheon of 50 years of excellently performed and recorded music.

Just as we oldies thought, as did our parents before us, popular music gets more and more predictable. Now science can make it even more reliable as a nice little earner for the media empires.

If you want to try the equations on your potential hits, or just find out how predictable some hits were and what surprises were thrown up by the British record buying public, take a look here. The equation results are animated below.

If your recordings, cds, lps or hi-res downloads demonstrate above average sound quality or interesting performances,
Whether you're a recording studio, label or artist,
this page will plug good recordings mercilessly.
Great audio is pointless without great music!