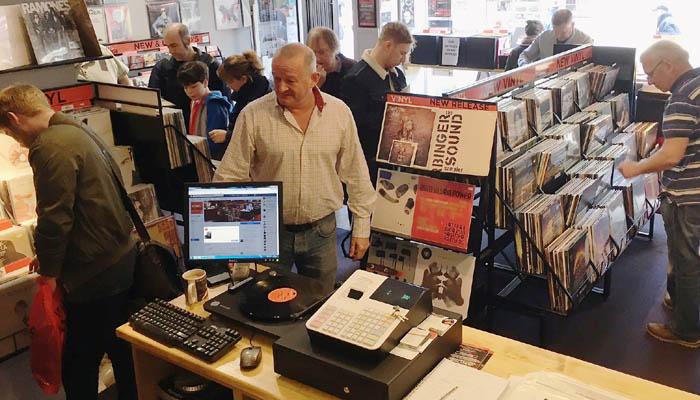 Your Old Scribe has just spent a Saturday morning as it should be spent. Your Old Scribe spent Saturday 22nd April 2017 loitering in an independent record store, Mansfield's Vinyl Lounge, enjoying the buzz of a busy record shop on Record Store Day.

Record Store Day is now in its 10th year. What began as a desperate attempt to revitalise the art of loitering in record shops on a Saturday, has grown into a massive event worldwide, with special releases, live appearances, and all manner of promotional material reminiscent of the halcyon days of the 1960's and 1970's. It is the independent record shops that have carried the torch for vinyl, for informative staff (often the owners themselves), for independent labels, for new local artists, for particular genres and above all, for the love of listening to recorded music. In the last quarter of 2016, vinyl records outsold (by value) downloads.

It was 20 years ago that the major record labels, absorbed by entertainment corporations for whom music was small-fry compared with movies, TV and games, became increasingly risk-averse. The major labels concentrated on a narrowing catalogue of bankable artistes. The big chains of record stores had stopped selling vinyl (whatever they now claim in their PR) in most, if not all of their stores, hoping to force customers away from unprofitable vinyl towards CD's and DVD's. These big corporations failed to understand their customers, who having got used to unsatisfactory physical media (sloppy cracking jewel cases, discolouring discs) promptly found new ways to obtain their tunes. These new ways did not require a physical store and often not even a payment to the legal copyright owner.

Meanwhile, in the world of small labels, new bands and independent record shops, there were rumblings of discontent. New acts struggled to get signed, independent labels struggled to get their product distributed (two of the biggest distributors of small label releases went out of business) and the big chains fled even further from their original identity, soon abandoning music and the high street and subsequently reaping their just rewards. The handful of surviving independent record shops were being joined by newcomers, founded by those who knew their value and capacity for sales in this new environment. Vinyl Lounge in Mansfield is just such an enterprise.

There were hundreds of special vinyl releases for the 10th Record Store Day, including major new issues of global artists' back catalogue and previously unreleased material, as well as quirky gems like the BBC Radiophonic Workshop Dr. Who special effects disc. It was worthwhile, this year, to compile a shopping list from the releases database ostensibly published at midnight, before setting out. independent shops could not hope to carry the full range, nor enough examples of the most popular, to satisfy demand. Arriving early with a scrap of paper bearing the high priority wants is still no guarantee of getting that rare limited edition of a favourite artist.

However, arriving at any time was to be sure of a warm welcome and the availability of espresso (by Illy, whose flavour researcher is an avid TNT-audio reader) and various cakes and goodies. The Vinyl Lounge is part coffee shop and part vinyl emporium, in the manner of many good bookshops. Hence, the blessed aroma of new vinyl merges with the heady aroma of proper coffee, enabling customers, on less frantic days, to relax, hear an unfamiliar disc and pleasure their olfactory senses as much as their ears. The vinyl LP enables us to feast our eyes too, on cover art, gatefold sleeves and liner notes. If this sounds like music porn, it probably is. So stop pleasuring yourself reading about it and go to your nearest record shop immediately. If there is no vinyl store in your town yet, think of this as a business opportunity.

Record shops are back. Vinyl never went away for some of us, and in real terms is still as affordable as 40 years ago. There is a great mix of businesses trading in used vinyl and others specialising in new releases on pressing quality beyond the wildest dreams of audiophile avarice 40 years ago.