Thoughts of an Italian living in Hannover 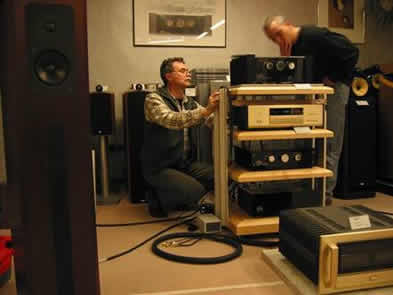 High Fidelity is not just CD players, turntables, pickups, speakers, spikes and cables; it is the result of different cultural approaches, tastes, way of life, which developed through time and space. A sintoamplifier of the 70´s reminds us of a time that seems to have little in common with our age of multichannel HT receivers with LCDs control panels, LEDs, 2000 inputs and 4000 outputs, DDEX 18.3 super extra wide and so on.

In this article, I would like to express some thoughts about the peculiarity of HiFi in Germany (where I have been living for the past ten years) in comparison with other countries and particularly with Italy. Inevitably, my brief considerations may appear to be simplistic and superficial. However, this is my personal opinion, with which one may clearly disagree.
The photos are courtesy of Herbert Betting (the chap with moustache), my friend and adviser on HiFi matters.

What makes Germany so special?
The big difference with Italy and with southern Europe is the climate. In Germany, the weather is cooler, more rainy and with less hours of sunlight. This has influenced during the centuries many aspects of German life and culture. HiFi is part of the culture of a people; it is intimately linked to the passion for music and is an indoor kind of hobby.

As far as Germany is concerned, we can observe that:

These observations are clearly generalizations, on which anybody can disagree. I just wanted to mention some aspects, which in my opinion are typical of German society and influence its relationship with HiFi.

What does this mean?
In a few words, it means that German people can dedicate to HiFi significant amounts of time and money. In Hanover, you can find four HiFi shops, which, in my opinion, make good business and are not affected by a general slowdown of sales.

Music and aesthetics
When I listen to music using equipment made in Italy or in Germany, I notice some common aspects. The goal is to obtain general euphony, tonal equilibrium and reduced fatigue (I refer to medium-high quality products). To some listeners, the extreme neutrality of some German products may appear cold and boring, but I do not agree with this opinion.
The German hifi addict is ready to accept more compromises at the aesthetic level. Therefore, the equipments are somewhat more imposing, cold and square, like the Fisher & Fisher loudspeakers which are made in stone (!). No wonder that Sonus Faber has been designed and produced in Italy. The WAF plays a role in Germany too, but it is a different kind of WAF. I have placed an Audio Analogue Maestro amplifier in my living room and I am extremely satisfied of its performance. However the seller has told me that many customers have been dissuaded to purchase this equipment by their wives, disgusted by its monstrous volume knob. I have made my purchase without consulting with my wife (!).

From this point of view, I think that Germany and Italy do not differ significantly. The CD plays a dominant role; and, while people tend to buy a DVD player able to play also CD, the CD remains by far the most common music source. The new trends, SACD and DVD Audio, have very limited sales, with the former being more successful, at least for the time being. The use of a DVD player is part of the current tendency to use a home cinema set up (HT) to listen to CD. Here I do not see great differences in comparison with other countries and with Italy in particular.
The success of the “black” records is that of a moderate comeback. Today you can find vinyls even at Media Markt stores (the equivalent of Italian Media World), and this is something new. Also, the shops for used records offer more titles, the sale of record players and accessories is slowly increasing, and the prices are also going up. It is difficult to find a used record below 5 euro, while special recordings reach unjustifiably high prices. On the other end, I find more titles among the newly issued records, a positive situation, in my opinion.

Here too, I do not see great peculiarities in the German market, only a slight tendency toward the utilization of equipment large in size, sometimes even oversized, with a sharp and heavy design (ASR among all). The valves have a limited role. Some manufacturers develop the design and engineering in Germany and produce in China (Cayin, LUA), even if not all openly admit this; the reason is that the manpower cost in Germany is the highest among European countries. It is easier to find products made in Italy at more reasonable prices than products made in Germany. Often, the Italian products have a softer design, utilize wood and have in general a warmer appearance. Also in Germany there is a tendency to use HT receivers as HiFi players. Some companies offer “real stereo”, but the multichannel market is clearly in expansion. Here below an exception produced by T+A and its wonderful tube amp. Just right to this the hybrid Italian Pathos with partial wood finish. This seems to be a feature of several Italian manufacturers (Sonus Faber, Pathos). 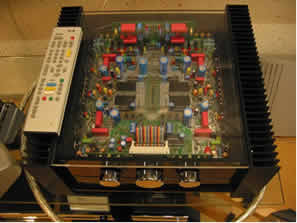 German people clearly prefer big size speakers, often towers. Many manufacturers follow this customer choice and produce mainly towers and very few bookshelf.
There is very limited interest for satellite-subwoofer active products such as the ones like Cabassi Io-Jupiter . Another peculiarity of German audiophiles is their interest for trumpet type receivers, some of which truly impressive in appearance. Clearly, the WAF plays a different role in Germany and in Italy. Again, the taste has a great influence on the appearance: many sharp edges like in the Carat line (Canton), materials such as metal (Piega) or even stone (Fisher & Fisher). It is difficult to imagine such black “monsters” in an Italian home.
Some interest exists for active models, which, however, are bought by a limited elite of audiophiles. 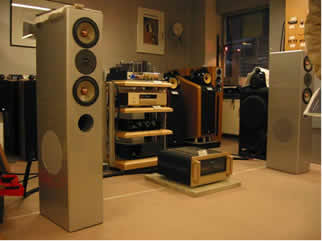 So, where is the crisis?
In Germany, just like in the rest of Europe, one can notice a reduced tendency to spend. Probably the reason is more a psychological attitude than actual shortage of cash. German people were used to a very strong economy, but the unification of Germany has changed the situation. The sometimes sharp and dramatic decrease of the stock values has played in my opinion a limited role, because German people do not invest much in the stock exchange.
The HiFi retailers that I know confirm that their sales have even improved. It seems that people, being reluctant to spend for consumer goods, prefer to invest in lasting high quality products. And, if I look at Hanover shop windows, I do not see any crisis in the HiFi business, but just a decreasing trend for CD sales.

The second hand market
I think it is much more developed here than in other countries and, in Germany, many internet addresses offer products at interesting prices.

HT and "real stereo"
Without any doubt, the trend is towards the transformation of the two channel stereo into a multichannel “entertainment center”. The two channel stereo is more and more limited to middle-high segments or to Hi End, while it has almost disappeared at the entry level. On the other end, MP3 players are having great success on the market.

Trends
In comparison with Italy, I see in Germany a bigger and more diversified market, with internet shops and attractive prices (Versand) but obviously with no possibility to evaluate the products. This causes much criticism from traditional hifi shop owners: customers want to listen in the stores and then they buy on line. This problem is certainly exaggerated, but it exists.
The interest for vinyl is increasing, but still limited. Online and traditional shops offer rich catalogs of new titles at prices which sometimes are very attractive (Simply Vinyl sells at 12-13 euro at Media Markt!).
As far as the so called new formats are concerned, which only some SACD titles begin to appear in some shops, but they are niche products. I almost get the impression that there are more SACD players than discs! Most likely more than one format will coexist. However Media Markt sells some LPs but no SACD or A-DVD, kind of surprising to me.
DVD audio have almost disappeared (actually they never appeared).
Two channel listening is loosing the entry level and the low segments in favor of the HT with five small cubes and a miserable active sub”mini”woofer, but remains strong in the medium-high and the high segments. Here many German companies offer products, for example ARS, Burmester, Lindemann, LUA, Fisher-Fisher, Manger, etc.
In summary, the long German winter and the great passion for music guarantee that High Fidelity will have long life in Germany.

Acknowledgments
All photos are courtesy of Herbert Betting, owner of Uni HiFi in Hannover (he is the gentleman with moustache in the first picture)