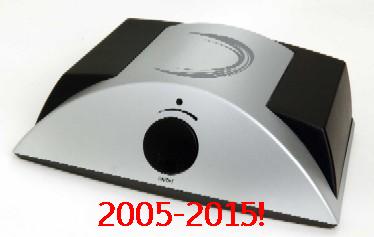 Exactly ten years ago (January, 2005) we published a review that quickly caused a stir among audiophiles around the world: the T-Amp phenomenon was born! That controversial article made online sales of the tiny, cheap and unbelievably good sounding Class D amplifier increase exponentially, so much that even the financial magazine Forbes published an article (see excerpt below) about the unexpected success of the small Company selling the T-Amp. The guys at Sonic Impact weren't aware of the huge potential of that small plasticky toy they were selling for about 25$. Now the Company seems to be out of business (at least, their website no longer exists) but during the early days of the T-Amp they used to sell 4,000 units per month (and just few hundreds before our review).

The huge sales success of the T-Amp wasn't relevant per se, rather it helped change the way customers could enter the HiFi market. After that first T-Amp many upgraded versions hit the market, curing the original faults of the small amp and making high quality sound affordable to everyone. Initially its heart, the Tripath TA2024 chipset, was used everywhere, then HiFi companies started to employ higher power modules, still from Tripath.

At that time there were few alternatives and Tripath seemed to be the only name in the game. Nowadays there are many different chip-based amplifiers that make use of various chipsets, ranging from Texas Instruments, Yamaha or more sophisticated Class D modules such as B&O IcePower, Hypex or NuForce/NuPrime.

The T-Amp acted as kick-starter for the affordable/good sounding Class D revolution. As a by-product, even the DIY scene got excited and involved in modifying/tweaking Class D amplifications. DIY kits started to become available and even absolute beginners began to appreciate the joys of soldering/modifying etc. Instead of dealing with potentially dangerous vacuum tube designs (high voltages involved!) the DIY crowd discovered that even playing with chipsets could be fun (and safer!!!).

We published an article on how to tweak and rebox a T-Amp back in 2005. Moreover, because of the low power of the first Tripath chipsets like the TA2024, audiophiles rediscovered the need for high-sensitivity full-range loudspeakers as well. DIY projects like our T-Speaker became more and more desirable and popular.

On the other hand, the T-Amp phenomenon gave birth to a new era in consumer amplfication as well. Within a few years many HiFi Companies had added Class D amplifiers to their catalogues. Historical brands like NAD, Rotel, Pioneer, just to name a few, are now offering Class D integrated and power amplifiers. The high efficiency Class D operation (almost 90% of power consumption is transferred to the speakers) makes these amplifiers green, in the sense that they are more environmentally-friendly. This is a feature that is quickly assuming paramount importance in consumer electronics. For this reason I expect to see more and more Class D implementations in the near future.

Class D wasn't invented by Tripath - and their Class T was just a variation on a theme! - as switching amplifiers had been in the market for decades, but, in my opinion, it was the T-Amp phenomenon that persuaded people (audiophiles) to reconsider the sound quality of this technology. Suddenly, Class D amplifiers started to be considered good sounding! For all these reasons we all owe something to this tiny, ugly, cheap amplifier! Happy anniversary T-Amp!