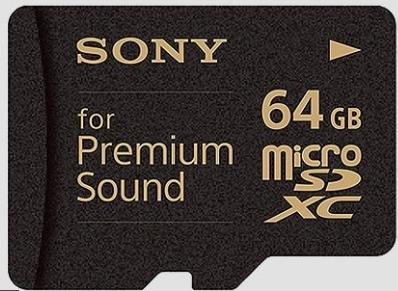 I'm sure you were all waiting for this! Wondering, pondering, praying and hoping for audiophile-grade SD memory cards. No, it's not an April's Fool joke, it's really happening. Sony has just released the microSD XC SR-64HXA, a memory card specifically for Premium Sound purposes, as claimed by the Japanese Company.

What's the deal? Apparently, this memory card would reduce electrical noise while reading stored audio data. This should give us better sound when the card is used on high quality HiFi components, such as media players, high quality mobile devices etc. It can contain 64 GB of audiophile-quality (???) data, all of this for the negligible amount of 18,500 yen, that's 133€ folks!, almost five times the cost of a standard 64 GB card. Is Sony serious about this new product? Apparently yes, though not 100% sure it will sell all that well:

“We aren't that sure about the product's potential demand, but we thought some among people who are committed to great sound quality would want it...”

This is what a Sony spokeswoman said to the Wall Street Journal. The Sony SR-64HXA aims to be the SD card of choice for those new Sony Walkman ZX2 buyers. Remember that this new walkman costs something around 1200€. Why should you use run-of-the-mill memory cards with such a high technology jewel? ;-)

The point is that media players that import digital data from memory cards normally store these data in internal buffers so there should be no advantage in using low noise storage devices, in my opinion. It seems Sony is trying to redefine its position in the audio market, building a super-niche of (insanely?) highly-priced components and devices. It all started with the introduction of the SACD standard, I wish these new products better luck!

In my opinion the market doesn't really need niche products (as it's already overcrowded!), just higher quality components at lower prices. Or new products that make our lives easier and, in some sense, better. Do you remember the first Walkman? Now THAT was a revolution! High quality portable sound for everyone! Trying to sell mostly standard products at insanely high prices might be a move in the...wrong direction.