Music under palm trees and... some reviews

If you're a faithful reader of our pages you should know we always take a whole month off during Summer. Also, you should know TNT-Audio gets published and managed in Sardinia, that big island in the midst of the Mediterranean Sea, place of sunny weather, palm trees and white beaches :-)
We need a month "off" to (re)collect our ideas, (re)consider our "backlog" of components waiting to be reviewed (!!!) and, generally, try to (re)cover the "fun" part of this hobby...and what's better than playing with HiFi accessories, listening to some new CD while sipping a frozen mirto under a fresh palm tree? Nothing, trust me :-)
And that's what I did last August, actually.

First of all, some "coming soon" fresh news: during Summer I've been testing different versions and releases of those NuForce digital amplifiers (REF8B and REF9) everyone is raving about, with extremely interesting results. The only problem was that I couldn't finish a review that a new "release" or "upgrade" was ready. Despite of this, the results are so amazing that one can easily forget the extra "work" required.
Then I've been playing around a pair of mid-sized bookshelf loudspeakers (two ways reflex with a 8" woofer) which have an impressive T-Amp-esque stellar quality/price ratio. I'm still trying to figure out the availability of these gems worldwide (distribution has just begun), then I'll publish a review.

As promised, I've also been working on the 5-hands review of a component we named "T-Preamp": a small preamp with line and phono inputs, that can be powered via the same T-Amp regulated PSU and that costs almost nothing for what it offers. Stay tuned for more news about this exciting component (ideal T-Amp partner if you have more than one source and/or a turntable). 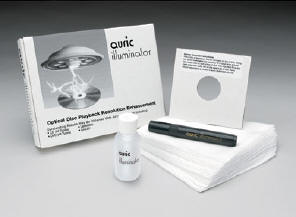 I've also had the possibility to test the new release of the Auric Illuminator, a CD treatment that forced me to write a rave review here on TNT-Audio a couple of years ago. This new, MK2 release is different, both on looks and results.
The unpredictable success of the first "release" woke up the competitors from sleep and several other products were released, forcing Audience, the manufacturer of the Illuminator, to clear their desks and start planning to improve the product. Success and market leadership require neverending R&D in order to stay "on top".
This is how and why the Auric mkII was released. I do not know which are the "chemical" differences from the original Illuminator fluid. For what I can see, the colour has changed (from light blue to clear transparent) and the "pack" now consists of a single, bigger bottle instead of two smaller ones. Even the "pen" seems changed: now it is a plain Staedtler "Lumocolor" permanent marker. Yes, the one you perhaps already use at home or office. The whole set should be enough to treat 200-400 discs.
The usual supply of soft cloths seems unchanged and so is the retail price (40$). This is really good (and unusual) news: it is quite rare to see mkII's upgraded versions with the very same price tag of the previous ones. Normally "upgrade" is simply a synonimn for "price increase" and nothing more than that.
I haven't tested the Auric Illuminator on DVD's and LaserDiscs. I've tried the fluid alone, without the pen and viceversa. Finally I've tested the whole set (fluid + pen), on Audio CD's only.

If you're familiar with CD treatment fluids the "Illuminator" effect shouldn't be a big surprise. Normally, these fluids improve the transparency of the mid-high range and allow for a better detail retrievial, enhanicing overall "resolution". A certain "smoothing" effect is also quite common. But, hey!, now there's much more than that...the Auric Illuminator improves mid-bass and bass too! I wasn't prepared to this when I tested the mkI version of the Illuminator. Imagine how I feel now that I'm testing the "improved" mkII version of this "magic" fluid. All the good things the original Illuminator did (better focus, clarity, bass control and PRAT) are still there ...only unmistakenly improved!
Don't ask me how is this possible 'cos I don't know. But I can't deny the improvement above the original Illuminator is sensible and _certainly_ not a placebo effect. Bass lines have better control and articulation, voices are clearer and perceived distortion levels are lower. Even the 3D soundstage gets improved: you may experience a better focus on instruments and singers. You may also get a better, improved stability of the virtual image as well.
Comparing two discs, one treated with the old Illuminator and the other with the new formula, the difference is evident: with the old fluid CDs sound less precise and even a bit "warmer". The Illuminator mkII adds transparency in the mid-high region so that details and nuances are unveiled much more easier. I'd better describe it as a "magnifying glass" effect. Details are not "in your face" though: everything seems sharper without sounding artificial. Quite the contrary: discs which sounded harsh and shouty earn naturalness. Take Ben Harper's "Diamonds on the inside" copy-protected CD for example.
Right out of the CD box this disc doesn't sound bad but traces of harshness are easily spotted, from time to time. I'm not sure whether this is due to the copy-control code but after an Illuminator treatment harshness disappeared, melting like snow under the Sun. I know this is a bold statement to make but please don't trust my words...try it by yourself. After all, 40 USD (in the USA) isn't such an outrageously high amount of money, especially when compared to the price of other "magical and mystical" tweaks...in any case, the Auric can be used as a pure and simple cleaning fluid!

Listening Music under a palm tree requires a portable device. For example, a portable CD player and a pair of good earphones. Even during Summer any serious audiophile can't forget good audio reproduction. I'm no big fan of portable CD players, they've always sounded cloudy and shut-in to me. And terribly "slow" when powered by batteries. How should an ideal portable CD player be? Small, lightweight, ready to read everything, with a nice FM radio inboard. A good external battery packet wouldn't be bad, also. And what if you could update its internal firmware directly online??? Now that would be NICE and COOL!!! 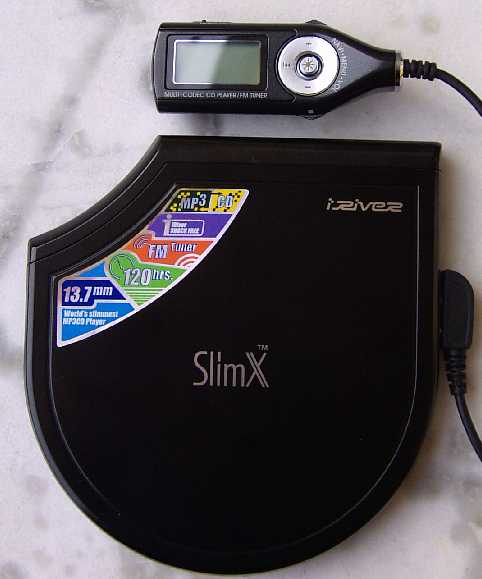 And here it is: the iRiver iMP-900 portable CD player + FM radio. Besides all the things cited above, this little gem also sports a remote with a back-lighted graphic display, is fully Windows Media Player and MP3 compatible, weighs in just a mere 160 grams, makes use of an anti-shock adjustable circuit, a built-in 5 band equalizer with 6 "presets" (one for each musical genre) and a quantity of user-customizable functions that may require a full month to be learnt. I admit I'm a kind of a retro-grouch: ON/OFF and PLAY...and that's all I really need.

As for technical specs: the headphones output delivers 9 + 9 mW on a 32 Ohm load and 16 + 16 mW @ 16 Ohm. Hence, I'd recommend low impedance headphones. The LINE output delivers 0.57 Volts on a classic 47 kOhm load, enough to drive any line level input...for example a T-Amp :-)
The LINE OUT is not FIXED so you can directly drive a small power amp, when using the player at home. I've listened to the iMP 900 with the line output level set at its max, as it should always be in order to prevent sound degradation, but even at lower levels I haven't detected nasty effects on sound. Signal to noise ratio is 90 dB while playing time, with internal NiMH batteries, is around 30 hours, which become 120 with the supplied external battery pack.
At home, of course, you should use the supplied AC/DC transformer (switching technology, 4.5 Volts).
The antishock circuit works well and I haven't been able to make the small player skip a track or a portion of it, no matter how hard I tried. I'd have preferred to be able to exclude it for home use.
The built-in FM radio offers a 50 dB signal/noise ratio and can held 20 FM station in memory. Everything can be programmed and adjusted via a wired remote with a GUI interface, available in 40 (forty) different languages.
Can we ask for more? No! I'd rather ask for less :-) Just one thing is missing: a digital OUT! It would have been nice to test this player with an external DAC, for example, or to use it to extract audio in digital format from CDs and CD-Rs.
Anyway, what should really matter to us is: DOES IT SOUND? Does it produce good tunes?
We have already reviewed another iRiver product, that iRiver iHP 120, an extremely interesting portable hard disk recorder.
The guys at iRiver - perhaps - pay some attention to the sound quality of their products. Indeed, this portable CD player has been a big surprise for me. I wasn't expecting much, considering all the bad experiences I previously had with older PCDs. This iMP 900 lacks definition, detail and overall transparency, when compared to a "real" audiophile CD player but I have to admit it is very easy to listen to and it certainly gives some entry-level standard player a good run for the money.
For example, when compared to some of these (those entry-level Teac or Philips I reviewed for TNT-Audio) the iMP 900 possesses a certain "true" tonal balance, without colourations or smart boosts in certain frequency ranges. Compared to my old portable (a Technics, old top of the line) the iMP 900 is even able to reproduce some deep bass. Furthermore, instead of being aggressive (as one may expect) this PCD sounds smooth and unoffensive and even sibilants appear less harsh than they should be (smoothing effect). Oh yes, 3D soundstage is quite flat, rather 2-dimensional but, hey!, are we really expecting 3D soundstage from a portable CD player???
Summarizing, though not 100% correct, the iRiver player can be left in play for hours, without offending the ears. And this is another bold statement, considering how much I require from any digital source to be considered "listenable" (compared to my analogue rig...).
It doesn't come cheap (almost 180 € here in Europe) but it offers so many things and features that one couldn't really ask for more. I'd rather consider it some sort of "high-end" in the market of portable CD players. For more infos, see www.iriver.com.

Why have I written a short-review of a portable CD player, you may ask. Oh well, I consider it one of the best partners for the T-Amp, for example. You can slip both in a pocket, add a pair of small loudspeakers in a bag and your portable stereo system is ready to go, gifted by a sound quality that can't even be compared to boom-boxes or similarly-sized portables. A good CD/MP3/WMA player, a nice 20 stations FM tuner, an exquisite amplifier (the T-Amp) and a pair of good, small bookshelf speakers: for less than 400$/€ your good Music can follow you wherever you go, whatever you do.
Even when admiring the sunset under a palm tree...