Another surprise from Japan...

Last February I published an editorial where I discussed the craziness of HiFi prices, exposing the real differences one may encounter buying the very same item in different Countries. A Shelter cartridge, for example, costs more or less 500 € purchased directly from Japan and 1500 € in Italy.Thrre times as much, not bad. Hence, buying online might prove to be smarter than one may think.
This is one of the reasons why I love the 'net so much: you can buy just anything by simply clicking your finger on your mouse, saving time and hundreds of €. Even thousands. Of course, there are things that can't be bought without an audition but it might be different for many others goods: Music, simple accessories etc. After all, if the money involved is a limited amount, one can decide to take the risk. In the worst case scenario you can resell the item at the same price you paid (considering how expensive it may become in your own Country).

I love Japan. I've never been there (...but I plan to find the time...as Steely Dan sing on Pretzel logic) but I've always benn fascinated by their culture, their ability to innovate and create some of the finest components in the world. Think for example at their HiFi cartridges: the finest craftsmanship matched to innovative industrial thinking and designing.
While surfing the 'net I've recently bought two Zen-meditation Zafu's pillows that now sit on a tatami into my living room. Actually, my living room (which is quite large, 60 sqm) is called the "Virtual voyager's room in the sense that it is filled with accessories I bought online from almost any Country in the World: African wood sculptures, a 4/4 Chinese violin, Cuban maracas and guiro, Thai drums etc.
Two months ago I was surfing the web in search of fancy HiFi accessories and, link after link, I ended up staring at my laptop screen like an idiot. Two minutes later I was placing an online order, charging my credit card directly on the Manufacturer's website (as the item wasn't distributed in Italy, yet). Five days later the parcel, as promised by the Manufacturer, was in Milan, waiting for the customs to apply their usually silly fees. Four days later the strange parcel was at home. Less than ten days from Naha (Okinawa islands) to home, not bad at all, considering the distance (!!!) and the fact that I live in an island myself (Sardinia). I tracked the parcel day by day via the EMS online tracking service. Just perfect! And this is what I received: 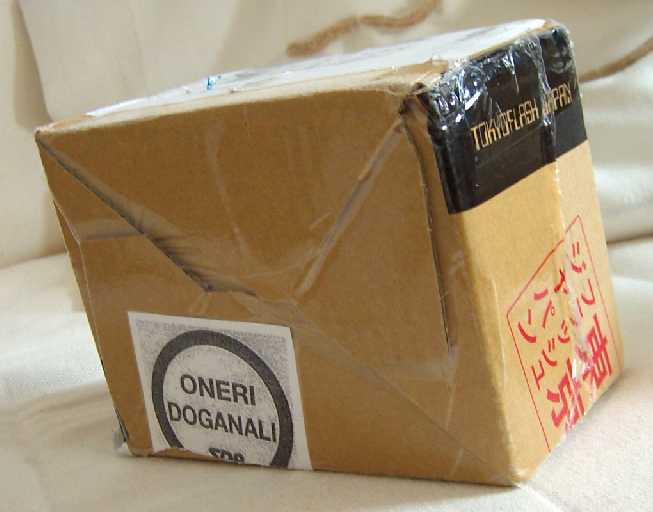 The parcel had a small "Oneri doganali SDA" stamp on it, which means I had to pay some customs fees (VAT + other silly things). At the inside of the small parcel, wrapped into a pluriball sheet, there was a second box with ideograms and cool pics of Japanese towns at night. On the top of the precious box, a nice and mysterious golden dragon. 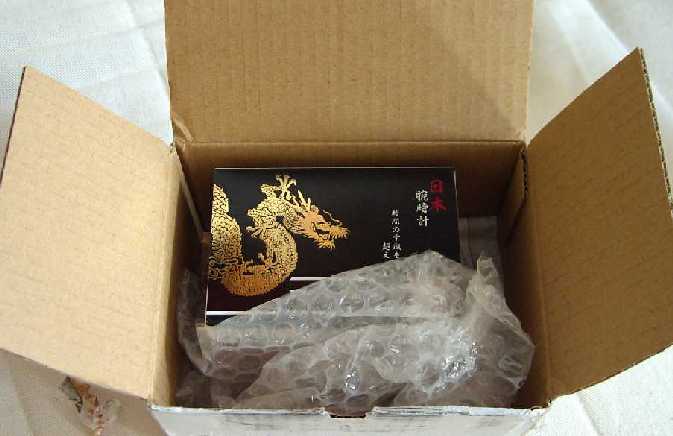 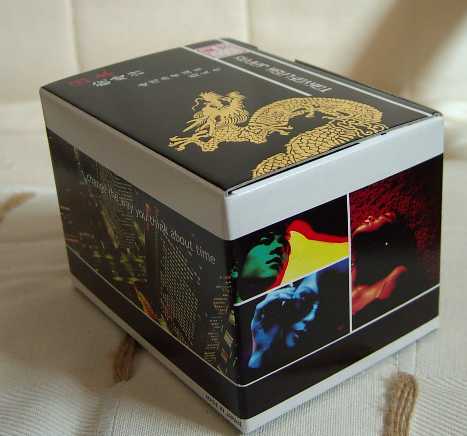 Opening this second box unveiled the real content, the fancy item I was waiting for! What? It is not HiFi? Are you sure? This is the coolest audiophile wrist-watch I've ever seen. And I'll explain it in a moment. 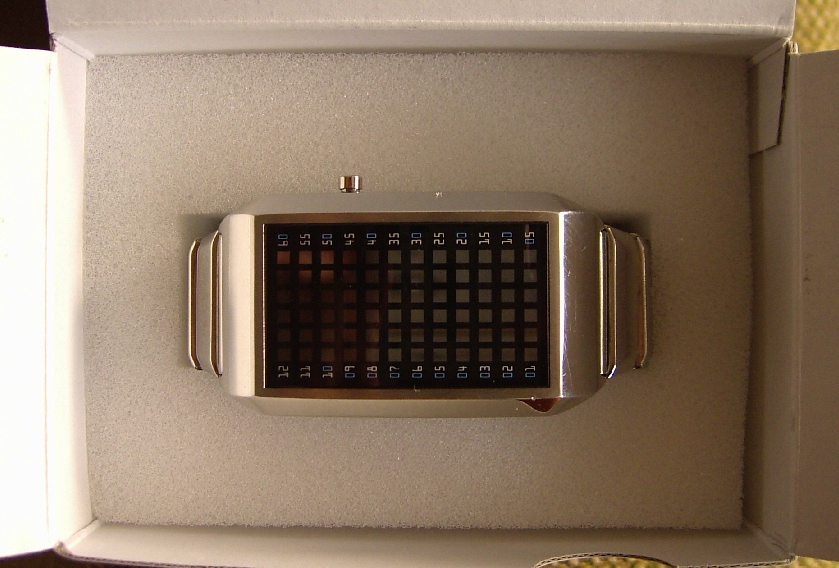 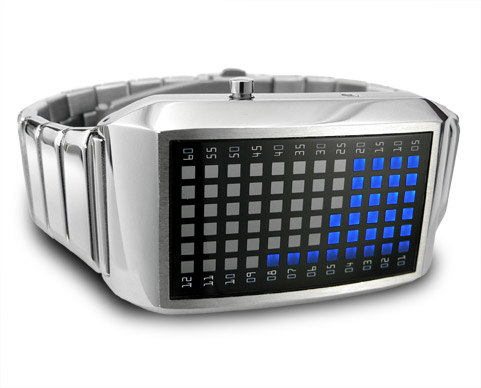 Perhaps I've never confessed I'm also a watches collector, besides being a vintage HiFi collector. I own several watches, from rare vintage ones to totally insane modern watches. I couldn't miss this TokyoFlash "Pimpin' ain't easy" (yes, that's the name of the game!!!). Reading it isn't easy at all, but after a couple of days you get used to it. It uses a 72 blue leds display where the first column indicates hours (from 1 to 12) and the rows indicate minutes. Normally the display is switched off, you need to press the button on the right to activate it. After some cool led animation it displays hour and minutes (in the pic above: 8:22). Some of you might remember the legendary Hamilton/Pulsar led watches of early Seventies!!!
Now, why is it an audiophile watch? For many reasons.

First, the looks. The mirror-polished inox and the blue leds remind me of the luxurious fascias of many modern HiFi components. The quality of the finish is absolutely stunning. The pics can just give a pale idea, trust me. Moreover, don't forget "silver and blue" was a match made in Heaven during early Eighties. For example, have a look at the Pioneer vintage series like this RG-2 dynamic expander processor based on the professionally renowned RG compression/expansion technology! This component, absolutely perfect and in excellent working conditions, belongs to my private vintage HiFi collection. What's a dynamic processor? Curiously, it is a component that may prove to be useful, once again, nowadays. They were popular during late Seventies-early Eighties as they were used to increase the overall dynamics of LP pressings. Put the component between preamp and power amp, decide the amount of dynamic expansion you need, et voilà!, the loud musical passages become louder, making Music more lively and realistic.
These items became useless once CD entered the HiFi market, with its virtually infinite dynamic range. Today, thanks to the insane loudness war, many recordings have nearly zero dynamic range: everything sounds equally loud! Why don't we plug a dynamic processor in to make our favourite Music come to life? Of course, there was/is a price to pay for such a delicious gift: at the highest settings (+12 dB, +16 dB) a slight "pumping" effect could be heard, from time to time. At lower settings it was nearly inaudible!

Let me go back to the reasons why I consider this an audiophile watch. for example, it is definitely oversized, weighs a ton (130 grams!) and measures 54 x 31 mm, while it is 12 mm thick (make your non-metric conversions here, please). Oversized, exactly like most of the HiFi components nowadays. Uselessly oversized, if I may.
Moreover, it is uselessly complicated: it should let you see the time and forces you to press a button, wait for a cool animation and calculate how many blue leds remain on :-)
It should do something which is EASY (displaying the time) but it does that in a tortuous way. It doesn't get any different in HiFi: electronic components should reproduce Music (which is easy even for a simple on/off 2$ radio) yet they are utterly complicated: multiple separated components, trasports and DAC, outboard PSUs, preamp and power amps, miles of ridiculously oversized cables and so on. And I haven't even mentioned vinyl playback!!! The overall power on procedure isn't easy either: first the preamp, then the power amp...and viceversa to switch everything off! Complicated, it is insanely complicated, dudes.

Furthermore, exactly like many HiFi components, it has been designed to be seen, to generate comments, lots of oooooh's, aaaaaah's and so on. You may think this watch might not get noticed. Wrong: from 6 pm to 1 am (the so-called "Pimp Hour"), every 2 minutes, the display lights up and makes some cool animation. It is impossible not to notice it.
The name says it all. There shouldn't be any need to explain what Pimpin' ain't easy means. For non-English readers...just think at the MTV series "Pimp my ride".
The watch is already quite popular worldwide. For example, it has been used in "Fast & Furious II: the Tokyo drift", a movie any car nut worth his weight in Nitrous Oxide (see NOS) has watched at least ten times :-)
Musically, the watch has been weared by Amos in the videoclip "I can't stop my feet" and by the rock group Simple Plan at the Japan MTV Music Awards.

Let me also underline a big difference with modern HiFi: instead of being insanely expensive, this "Pimp" is quite affordable, considering the quality of the crafstmanship and parts: at 26,000 YEN (± 250 USD, 170 €) it is definitely less expensive than many plastic anonymous watches. The price includes free shipping worldwide, too. Depending on the Country you live in you might need to add customs fees and VAT, that is +30% in the worst case scenario (which I assume to be Italy :-)).
Technically, the watch claims to be 3ATM waterproof, uses an oversized inboard PSU :-) with 2 x CR2032 batteries (as leds draw much current!) while the case and the bracelet are of high quality polished stainless steel.
Despite its size and weight it is very comfortable to wear, because it has no sharp edges. The Pimp has been available, for a while, in a gold (with red leds) finish, again like some japanese HiFi of the Eighties! On YouTube, by searching for "Tokyoflash Pimp", you should be able to see all the videos devoted to this watch (and similar models from the same brand).

The Pimp is one of the easiest watches to read made by Tokyoflash. If you are looking for a much more insane watch just browse their website. They used to make even "The Equalizer" (now this belongs to their "Museum", see website), a watch that displayed time by means of band-equalizer bars. Another audiophile watch, aimed more at the DIY crowd, is the ScopeWatch you can see below, where hour and minutes get displayed by means of a 'scope-like display. Mucho DIY!

I know you are wondering why this article is about a watch. The reason is simple...we shouldn't ever forget that Tutto nel mondo è burla. L'uom è nato burlone (Falstaff opera, 3rd Act, Giuseppe Verdi) that is to say "everything in this world is a joke and man is a natural born joker". Our hobbies are just a way not to forget our childhood, with always new and cool toys.
As a wise man once said: The difference between men and boys is the price of their toys (cit. author unknown, sometimes referred to Oscar Wilde).