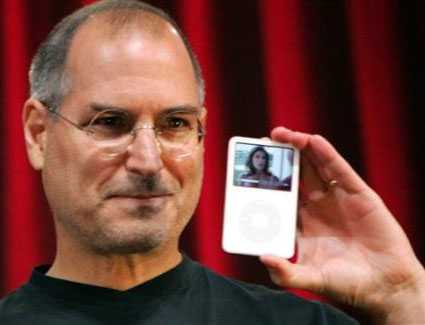 Steve Jobs, the man behind Apple Inc., passed away just 3 days ago (Oct. 5, 2011). Instead of repeating all the things you might have read or heard somewhere else about his life and his seminal thoughts and visions about hi-tech and informatics we prefer to celebrate him for his fundamental contributions to digital audio and liquid music.

Since we are interested in high quality audio you might wonder why iTunes and iPod should be of some interest for all of us. Well, since its first launch in 2001 (see the original video below), the iPod could play uncompressed WAV files, besides MP3! Oh well, the first 5 Gb Ipod could contain just few CDs (uncompressed) but it could play .wav files reasonably well! Outstandingly well, indeed.
It is not surprising to spot an iPod - even nowadays - frequently used as high-quality source for demos in many HiFi shows worldwide and there are many high-end Companies which have started designing and selling expensive docking stations for this Apple music player (even Wadia, among many others!).
And don't forget the iPod Classic 160 GB has been included into Stereophile's famous recommended products list, Class D for digital sources to be more precise, with the following motivation:

This sleek and sassy data-storage unit is capable of playing lossy compressed (MP3, AAC), lossless compressed (ALC), and uncompressed (AIFF, WAV) digital audio files delighted JA and WP. WP was surprised to find the iPod worthy of serious audiophile consideration: "The open nature of the iPod's playback format-or, more properly speaking, its lack of a single playback standard-means that the player can offer the sound quality its owner demands of it. Files ripped in AIFF were "indistinguishable from the original CD," with impressive dynamics, detailed imaging, and extended frequency extremes. JA: "Excellent, cost-effective audio engineering from an unexpected source."
Stereophile's "Editor's Choice and "Budget Product of the Year" for 2003. Current version significantly revised and offers 160GB hard drive capacity as standard. JA is an enthusiastic owner. (Vol.26 No.10).

And what about iTunes then? Yes, the famous online store sells compressed digital music but it allows millions of people to familiarize with the idea of liquid music, something that can be purchased and enjoyed without the support of a physical medium. Most iTunes customers don't care about sound quality but few of them might need to know how an uncompressed file can sound like...and discover the joys of high resolution digital files!

Moreover, Mac computers and notebooks (MacBook, MacMini etc.) are highly considered - among liquid music enthusiasts - for being very good sources in a PC-based HiFi system, mainly because of their optical TosLink and FireWire digital outputs that can be connected directly to an external DAC, even withut using the USB port. Many of them also swear by the high quality sound of the native Mac music playing software!

As you can see, Apple (and Steve Jobs) have played (and still play) a significant role in the developement of high quality audio as well.

Steve Jobs, for all of the above and for everything he did during his life, will surely be missed. R.I.P.