I was born about ten thousand years ago.
There ain't nuthin' in this world that I don't know.
I saw Peter, Paul, and Moses playin' ring-around-the-roses,
And I'll whup the guy what says it isn't so.

Lucio tells me that I should offer a brief autobiography as a public service to those TNT readers suffering from acute insomnia. Always glad to show my public spirit, herewith I willingly comply. 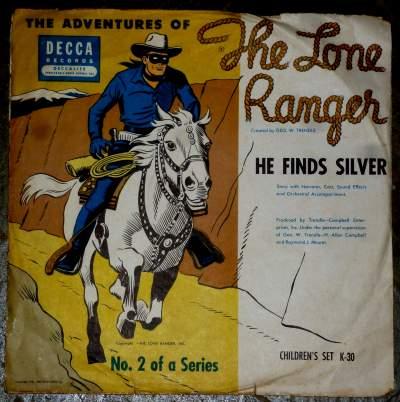 Although, probably like most denizens of TNT-Audio, I included records in my life from almost the very start, even then the drummer to whose beat I crawled, then toddled, and eventually marched was a bit, well, different. I was a rather late-in-life addition (I've heard unconfirmed rumors the word "oops" was uttered at the time) to the family of a couple from the generation that had passed its youth pleasurably sparring with each other in such picturesque vacation spots as the Maginot Line and the Normandy Beaches and Guadalcanal; thus, although a child of the '60s, I had my earliest audio experiences via hand-me-down children's 78s and 45s played on the family's 1950s-vintage RCA "hi-fi" set, which had a 12" Voice of Music turntable mounting a big, gold plastic tonearm with flipover crystal cartridge for LPs and 78s; tube electronics in a separate chassis that also incorporated the radio section; and on top of that a separate little rapid-fire changer, again with a crystal cartridge, for the 45s. As I'm recalling it, my favorites were The Lone Ranger (four episodes, one each on two ten-inch 78s and two 45s, all on the American Decca label) and a couple of Capitol 78 RPM albums that interspersed glossy paper story pages with the record sleeves, one being Bozo Under the Sea and the other something involving Bugs Bunny outwitting Elmer Fudd to snatch carrots from the garden.

I saw Adam and Eve driven from the door.
I'm the guy that picked the figleaves that they wore.
And from behind the bushes peepin' saw the apple they was eatin',
And I swear that I'm the one that et the core. 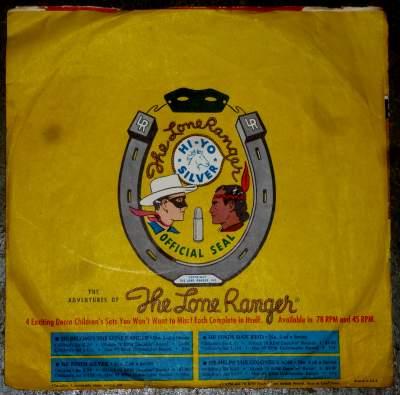 My first venture into modern stereo was not auspicious. When I was maybe four or five, Dad bought an up-to-the-minute KLH compact system to replace the hi-fi, which he gutted so that the cabinet could house the new unit, and I quickly discovered that while this electronic interloper's turntable had a 78 speed, it did not have the correct needle, and therefore I was not permitted to play the Lone Ranger 78s or Bozo or Bugs any more. Disaster! I immediately conceived a jaundiced view of modern playback gear that would take years to dispel, leaving me highly susceptible when, in the interim, a school friend started bringing home 78s from a junk store near his grandmother's house. Not long after, he got a Sonora ("Clear as a Bell") upright spring phonograph; I took one look at that handsome bombe cabinet with its gleaming nickel hardware and was instantly hooked. Off I went to the basement to dig out a big pile of juke box rejects Mom and Dad had bought for a nickel each after World War II. Then I promoted a cabinet's worth of 78 classical sets that had been sitting in a corner of the recreation room at our church, ignored, for decades. And so it went. Of course, I couldn't let my friend get ahead of me in having a clockwork phonograph, and so I wheedled my parents into trading an old crank telephone we'd had sitting around forever for the first piece of record playing gear I ever called my very own: a Pathéphone Model 100 upright, which as it happened came with a large collection of Pathé records. Which required a special stylus. Which I didn't have. Grrrrrr! Well, eventually I managed to find one, and by the time I finished US high school, at an age when most boys had decorated their rooms with images of pinups and sports and rock music stars, my room looked like this:

Instead of going to ball games; hanging out at the mall; or generally whiling away the time in all the traditional, uh, innocuous ways of teenagers everywhere, I was haunting the numerous junk stores and flea markets—now, alas, long gone, victims of the area's Dollywood-driven climb in real estate values—along Chapman Highway, between Knoxville and Gatlinburg, Tennessee, searching out old dance band and opera 78s. A lifetime pattern was set.

Now, Queen Elizabeth, she fell in love with me.
We were married in Milwaukee secretly.
But I got tired and shook her and ran off with General Hooker
To go shootin' skeeters down in Tennessee.

Off to college, and guided by more acoustically up-to-date friends I made my peace with electronic, stereo sound reproduction. Eventually, putting together a mix of bargain purchases and giveaways, I assembled a modest system with an ancient Kenwood solid state receiver whose metal cabinet was painted to simulate—badly—woodgrain; a well-worn Dual 1218 turntable with Shure M91-ED cartridge (with both LP and 78 styli, natch); two mismatched speakers (matched Utah boxes, but the insides of one had been blown and replaced with whatever was on hand at the college radio station); and, eventually, a no-name midnight-special 10-band equalizer from a local discount audio chain and a Hitachi D35s cassette deck. And off I was to the races on the usual long, tortuous upgrade road. All the while I continued accumulating 78s apace, to which bad habit I added buying LPs and, eventually, not too long after they appeared on the market, CDs, although I came to focus on classical and operatic music with a sideline in traditional jazz, leaving off the acquisition of most dance band and Hawaiian and novelty tune fare that had figured so prominently in my high school days. Once out in the workforce and gainfully employed, I began acquiring more spring-driven phonographs, too.

And that's about it, really. Even after slowing down upon becoming a father myself, I continue my love affair with recordings from antiquity, and I've done my level best to infect my daughter with the same madness. Happily, my wife supports and sometimes even encourages me, even though it means living with lots of furniture having a crank and one crank not attached to furniture! My latest project is to dub as many of my favorite records as possible to a hard drive and, in the case of the 78 classical sets, to edit out side breaks for continuous play. Intrigued? Stay tuned; I intend to write an article for TNT about my adventures in this uncharted territory.

Now, have a good sleep!

Lyrics excerpted from Woodie Guthrie, The Bragging Song (a.k.a. The Great Historical Bum), which I learned from one of my brother's Chad Mitchell Trio records when I was a tyke.