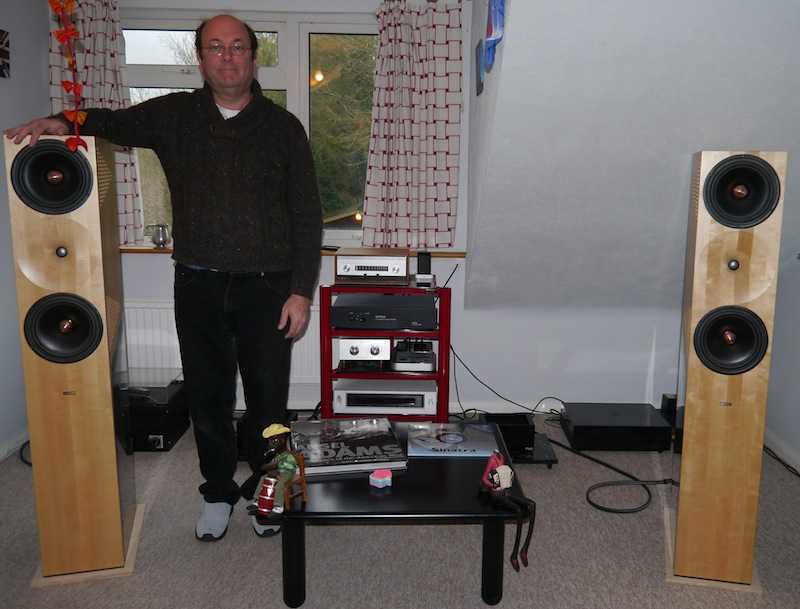 There are three passions in my life, first and most important my partner Linda, we have been together for 32 years. Secondly and mostly during the summer months there are the radio controlled scale gliders then finally my passion for music and audio systems. I spent my formative years in Sutton Coldfield where I went to the Aurthur Terry School and during that time obtained my first audio system, a Teleton receiver, Goldring turntable and no brand speakers. The Receiver and speakers are still being used by my father occasionally. When I left school we moved to Leicestershire and I attended Leicester Polytechnic, now Demontfort University. During my time at the Poly I funded myself with a weekend job as laboratory technician at a local dairy testing the milk samples from the farms. This part time job enabled me to hit the shops purchasing records and upgrade to a Trio amp, tuner, Leak 150 speakers and a idler wheel drive turntable who's origins I cannot remember.

After graduation in 1978 I moved to Reading, started work (electronic manufacturing and test) and built a copy of the Quad 405 amplifier. The success of the 405 encouraged me to purchase a 33 pre-amp and a pair of Audiomaster speakers and Dual direct drive turntable (secondhand) along with a Coral MC88E high output moving coil cartridge. This combination lasted for many years whilst the funds were diverted to house purchase and DIY, the usual distractions for a young couple. Eventually the Audiomaster speakers gave way to Goodmans LS3 5A as they were a better fit in our small lounge.

While living in north west Oxfordshire I discovered the local specialist retailer (Overture) in Banbury and was bitten by the upgrade bug and desire for a Linn/Naim system. With assistance from Overture I eventually upgraded to a Meridian 200/203 CD player/DAC along with a Naim NAC72 & NAP140 plus Linn speakers. In my small listening room the system sounded wonderful, lots of detail with that typical Linn/Naim rhythm. The bug continued so eventually the Dual turntable was swapped for a Linn LP12 with Itok II and Audio Technica AC09. I my setting and correctly setup by the guys at Overture this was a respectable system and it sounded wonderful, plenty of detail, what I thought at the time was reasonable bass and female vocals seemed so life like. It was during my time with this system I discovered the music of Mary Black, this has now become an obsession so I now own most of Mary's albums.

My album collect continued to grow slowly and I explored different artists on Cd and vinyl, in the early nineties there was a good secondhand market for vinyl with reasonable pricing and a lot of variety so I was able to add to my jazz collection with artists like the Modern Jazz Quartet plus some new pressings from Claire Martin and Carol Kidd. We stayed in in our first house for over twelve years but eventually life moves on and we moved to our current residence in south east Cambridgeshire.

The move from a work perspective has been fruitful though it caused havoc with the audio system. I now had a bigger room for the Linn/Naim/Meridian system but no matter how hard I tried it never sounded as good as it had back in Oxfordshire. Although I could see nothing wrong I think the LP12 had gone off tune, they are sensitive to the setup plus I think the speakers were not capable of driving the room. For the next few years I experimented with various combinations of second hand equipment including collecting some Leak valve amplifiers. The most exciting setup was a Lowther based Beauhorn Virtuoso with DX3 drivers and a pair of kit built 300B mono-blocks, the speed and dynamics were amazing but the look of the speakers was terrible.The Beauhorns were also vulnerable to the wondering hands of my two nephews and damage nearly occurred more than once.

I drifted further and only now have settled on a system that works most of the time. I have several pairs of speakers from the Amphion Krypton mk1, Audio Note AZ2, Magnaplanar SMGa and Leak 150 that get rotated depending on my mood, most of the time the maggies are used as they are a recent purchase and are undergoing repair and refurbishment. I have also been luck enough to acquire some leak valve amps, a pair of TL12+ plus an ST20 and ST50. The TL12+ were my first valve amps thanks to Nick over at the Emporium in Norfolk. I have now rebuilt them twice, the last time changing the EF86 input valve to triode mode, a good improvement.

My regular amps are the Whest PS.30R phono stage, Music First Audio transformer pre-amp and NVA A40 mk2 power amps with on occasion the NET Audio NA200 or the Helder HiFi STA508 Monoblock Amplifier that I reviewed back in December 2011. For the front end I use the Aqua acoustic quality La Voce USB DAC driven from an Apple MAC. The turntable, as you will have seen during the recent review of the Wand Tone arm, is a Garrard 401 in a custom wooden plinth. I am also luck to own a Leak Troughline tuner that has been rebuilt by Graham Tricker and sounds wonderful. That is me about up to date on the Hifi front, my other passion during the warmer weather is large radio controlled gliders towed aloft by a powered model, see Newmarket Model Flying Club for details or for some flying shots look here most of the video is of other modellers and their planes but if you do not blink you can spot my 10 seconds of fame as the yellow Moswey III takes off. If you are passing through the Newmarket area drop me a line and perhaps we can meet up for a coffee.