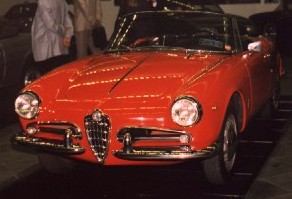 You may know that, besides being an audiophile, I'm a car nut, too, very fond of sport Italian cars, mainly Alfa Romeo and Ferrari. A car-oriented version of this reportage will be published on some US car newsletters, you may know I'm a (free, I always write for free!) correspondent from Italy for Alfa Owner, Overheard cams and La Pilota.
What's the deal with Alfa Romeo and Ferrari into a HiFi magazine? Well, you should know that the best Alfa's and Ferrari's were designed by Pininfarina, the famous Italian designer whose factory is located in Torino (Turin). Near Torino there's the Aliante factory, where pretty interesting and good sounding loudspeakers are made and, guess what? Many Aliante loudspeakers are currently being designed by Pininfarina! Bingo!
Cool cars and nice loudspeakers, all in a wonderful and exclusive (only 20 invited people) factory tour!!!
A bus leaving from the Top Audio Show in Milan brought us to the Centro Stile Pininfarina in Torino, which is 150 kms far.
Once there, we (Steven Rochlin and me) have been warmly welcomed by the staff of Aliante and by some of the engineers of Pininfarina. After a brief unauthorized tour in the Factory Museum (an authorized one was scheduled later...but we couldn't resist) we were staring at some outstanding Aliante new loudspeakers that I'll try to tell you about. 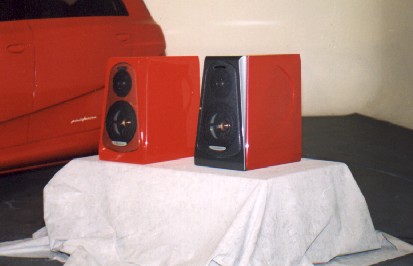 No doubt about this, the star of the Show was a Ferrari red painted One Pininfarina, it is a pity that the picture (because of the reduced size) isn't capable to give you anything else than a pale idea of how these Italian beauties look like in real life!!!
These loudspeakers are not intended to disappear into your living room, they are meant to shock instead. I hear you asking for the WAF factor, well I think your relevant S.O. will love these babies at a first glance.

The real World premieres of this factory tour were the Linea, a very cool looking floorstander, the first one ever from Aliante, and the Stile, a small bookshelf which looks like a downsized Moda. 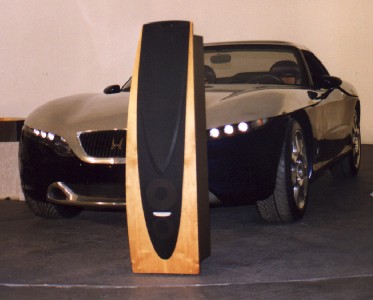 The Linea floorstanders aren't exactly like any other tall floorstander in the market, no, this is an entirely new concept in design. The Linea are not the ubiquitous tall walnut towers...they have a very slick curved baffle that hides the real cabinet so that all you can see is the baffle and nothing else. Even the color of the cabinet is uncommon, being painted in grey.
Technically the Linea is a three ways bass reflex loudspeaker, with a 13 cm midwoofer and a 26 mm tweeter. Then there's a built in subwoofer. Size: 39 x 39 x 119 and list price around 3500 $.
It is not the top of the range of the Aliante line, like usually the floorstanding model is: the One Zeta is still the top. 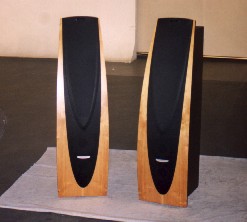 The Stile, being 19 x 23 x 32, is a downsized Moda and is available in the usual 3 finishes: metallic grey, electric blue and cherry wood (see the picture below). With this project Aliante intended to make a small loudspeaker that could easily meet everyone's taste, not just the audiophile's one.
It will not replace the Aliante Spazio though, which remains an audiophile-oriented bookshelf. Hence, for example, the Stile doesn't allow biwiring while the Spazio does. After all, biwiring budget loudspeakers with budget cables isn't always for better. Sometimes one can get better performance with a single cable (monowiring) costing two times as much than the budget cable used for biwiring. As usual, one should try and evaluate the results at home and don't take anything for granted.

For your eyes only, my dear readers, here are some of the inner secrets of the top of the Line Aliante Zeta: the impressive crossover, built with top-class passive components, the woofer and the tweeter. Shown below you'll see the Moda/Iperspazio tweeter too. 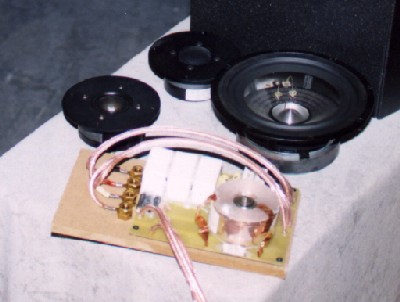 After a very interesting chat with Giuseppe Prato, the designer of the Aliante loudspeakers, about the current trends in HiFi design and about some new (top-secret) ideas at Aliante, we have been guided to the Museo Storico Pininfarina and to the amazing pletora of hyper-cool historic cars (Ferraris, Alfas, Jaguar, Lancia etc.), described and carefully explained by Ing. Paolo Pininfarina himself.
For example there was a rare (unique) model of Alfa Romeo Giulietta spider, the one shown on top of this page, which is the only one made with a different hood, namely the hood of the Giulia spider, since Mr. Pininfarina (Paolo's grandfather) preferred this one to the original production hood. So believe me, that picture unveils you something which is unique in the World: the Pininfarina's Giulietta spider.
After the guided tour into the Museum we have been invited for a very elegant dinner at the Marone-Cinzano palace, which is the headquarter of the Unione Industriale di Torino (no need for translating here, I guess). At 10 pm we were jumping into the bus that brought us back to Milano.

I'd like to thank Ing. Giuseppe Prato (Aliante designer), Ing. Roberto delle Curti (Aliante president) and Silvio Delfino (Aliante Vice-president, international sales manager) for having given us the possibility to visit the Pininfarina Centro Stile.
Also let me thank the Pininfarina staff for the wonderful factory tour, something unique and unforgettable.
The collaboration between Aliante and Pininfarina is one of the first, strong signs that the Italian industry, when working together, can produce wonderful examples of well-designed and very good sounding HiFi components.
The Italian style is already well known abroad but, in my opinion, the made in Italy HiFi deserves the same popularity of our cars, dresses and wines.