The fourth Milano Hi End Audio show has probably definitely assessed the role of the show in the Italian landscape.

The show has not changed so much: usual organization by Stefano Zaini (The Sound of the Valve), usual venue, usual problems due to scarce acoustic isolation between one room and the next.

I was told that on Saturday there was a lot of crowd. I visited the show on Sunday only, and unfortunately a total stop of motor vehicle traffic due to very high air pollution was enforced for that day in the whole extended Milan metropolitan area (something like 3-4 million inhabitants, including the exhibition center area) making the access by car not possible (in theory at least...). Just to complete the picture, at the same time the railways workers were on strike. Murphy's law, as you know, is always valid...

Given this situation, even Sunday was, according to me, a great success.

Let's start with the main course: the third floor where most of the rooms were located.

Kiom, the company by Luca Chiomenti, well known designer of "Lo Scherzo" (Italian for "The Joke"), a very low power and low cost and great sounding amplifier, continued in the presentation of their line of low power amps and high efficiency loudspeakers. 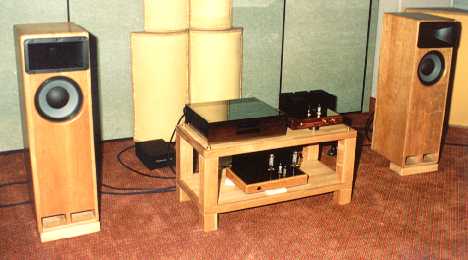 The room was always crowded. As a matter of fact I spent some time there too, relaxing. Beautiful woodwork. Enchanting sound.

The perfect one? I am not sure, it is too much a matter of taste. Apparently there was some lack of macrodynamics, but the sound was very clean, smooth, correct, precise. The level was always rather low (at higher volume the room sounded very bad, according to Luca). For sure the most relaxing sound of the show.
A real pleasure, being able to offer some rest to the ears after listening to all the other rooms. Only one problem, the next room did not follow the same approach to listening sound level, I would better say the opposite one, and if you take into account the reduced acoustic isolation you can easily imagine the results...

The products are designed and built by Luca himself. Also the woodwork is handcrafted by Luca himself: custom design and finish (including marquetry...) are available on request. Production is obviously extremely limited... 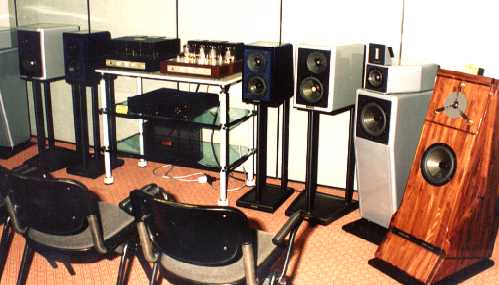 Crea Audio presented two huge Renaissance monoblocks by Aloia, the well known Italian designer. The terms "block" is nearly reductive: the dimensions are around 25x85x65cm (wxlxh). Also the VTPA The Last pre-amp by Aloia was no tiny thing: two huge boxes, one containing the inductive power supply, and the other the pre-amp itself. Impressive size and even more impressive sound. Plenty of dynamics and detail, iron fist in a velvet glove. 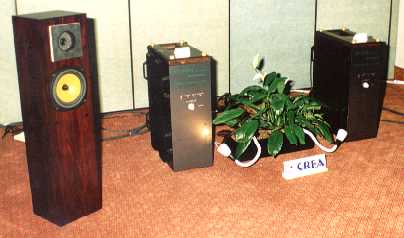 Ultrasound was present with their northern Italy distributor, Pick-up. 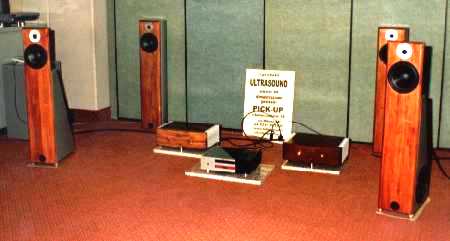 Audio Coils had a complete system based on their products, pre-amplifiers, monoblock amps and speakers. The amplifiers are are available with different powers and configurations (single ended or push pull, from 5 to 20W).

The Harp speakers are transmission lines. The line is bent so that it fires in front of the speaker: this gives a very characteristic D shape to the speakers. All transformers are based on "electrosmogless (R)" technology, that should grant less noisy power supply and signal. Prices are very reasonable. 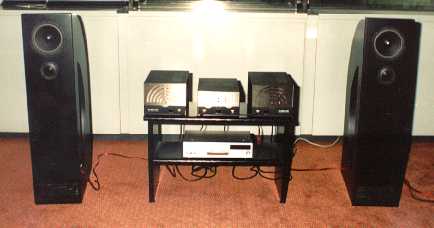 Studio Progettazione Audio and Imago Electroacustics presented their Amplificatore di Musica ("Music Amplifier"). There was also a prototype of a huge tube phono stage. Very good sound, much better than in the previous editions. Powerful, rounded, pleasant, both with Vynil and CDs. Great work. 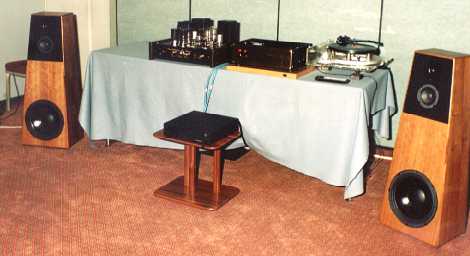 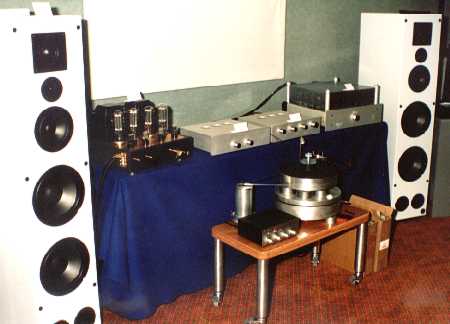 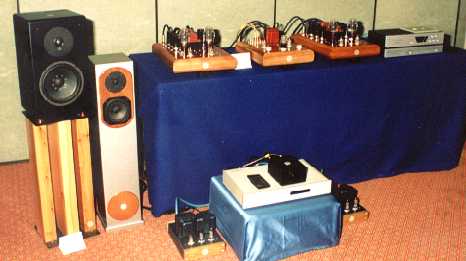 The Horus amplifier by Sotis Audio, reviewed on TNT a few months ago, was the center of a system in this other room. A very controlled, educated sound. 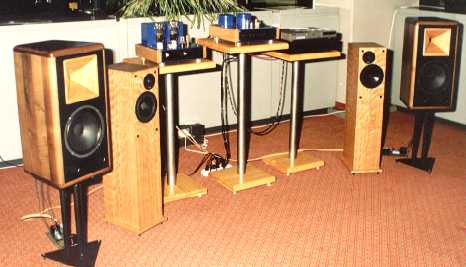 Albatron/Armonia HiFi presented the new CD1 Player, which is the combination of a new enclosure system, a Philips CD-PRO2 transport, and the new DAC4. An internal pre-amplification board with volume control is available as an option.

There are two versions, with different costs. Both units are top loading with manual closure, but while the normal one has a plastic cover, the reference version has a very heavy metal one.
The front panel of the normal version is transparent, but can be painted black inside to achieve a more standard look, if desired; the reference one has an elaborated and heavy metal front panel

The enclosure is stiff, with heavy metal and further stiffening boards of wood plus other damping materials. The transport is suspended on springs, as Philips suggests. Prices, unfortunately, are not so low, but definitely in line with the class of the transport unit. 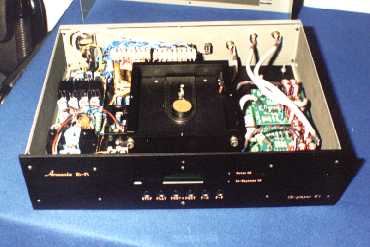 Montagna elettroacustica, a totally new brand for me, presented what could be best described as a "pipeline speaker". A section of what apparently was a very heavy duty tubing was mounted vertically over a large and low enclosure, with two huge woofers. The vertical tube carried a midrange and a tweeter, mounted inside horizontal branches protruding towards the front of the speaker. The builder claims these are high efficiency units. Please have a look at the photo to have a better understanding.

Their sound was not bad at all, the image precise even though not perfectly focused (but this is almost impossible to achieve at a show...), powerful and controlled bass. Definitely better than many other traditionally built speakers at the show. Their finish was so good that they really looked attractive. You just cannot believe it? Your problem, guys...

They were driven by a "magnetosolid" amplification by the same brand, that is a solid state amp with output transformers. 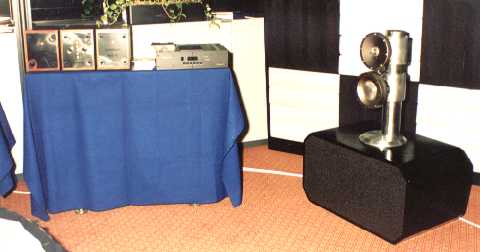 North Star Design presented the full set of North Star electronics, including the power monoblock amps, already seen at Top Audio and soon on test here at TNT-Audio. The design of the cabinet is very peculiar (on the floor, in the photo). Extreme Audio in the same room provided the new speakers of the Sigma Acoustic line and White Gold cabling. 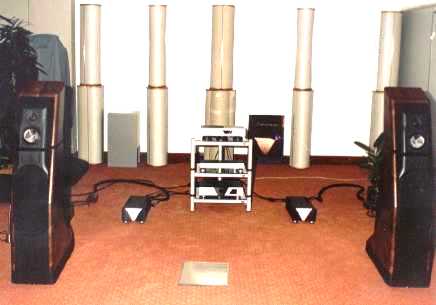 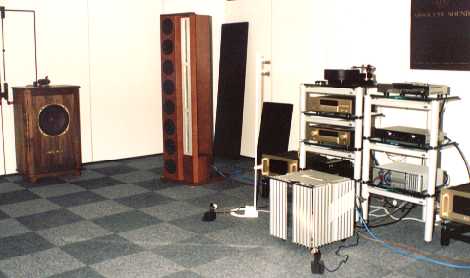 In the Saretta room there were ultra high quality otl amplifications, with a wooden look. These were driving very strange speakers in which the top part was balanced over two spikes resting on top of the lower enclosure.

Finally, at the first floor there were three further rooms. Relco Audio had a complete system based on their own loudspeakers, making large use of ribbons, and Vincent amplification, rather low cost products compared with the sound quality. Interesting. 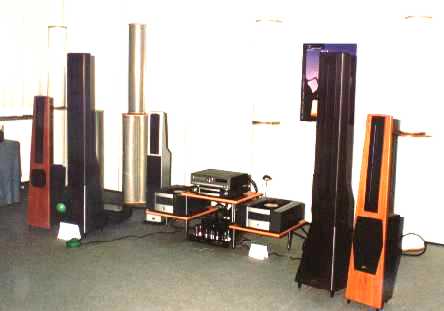 In the next room there was a very good sounding re-edition of the famous Quad ESL 57 speakers. Their production has been re-started in Germany by Quad Gmbh using original Quad tools. Brinkmann amplification.

Finally, last but not least, the Sound of The Valve room. The system included an Air Reference Turntable with Clearaudio Insider, Phono pre-pre Zarathustra, integrated amp Incantation of PX25, huge dipole speakers The Wall 2 and Lowther Delphic Z2. Also the cabling was by The Sound of the Valve. The sound is improving year after year. 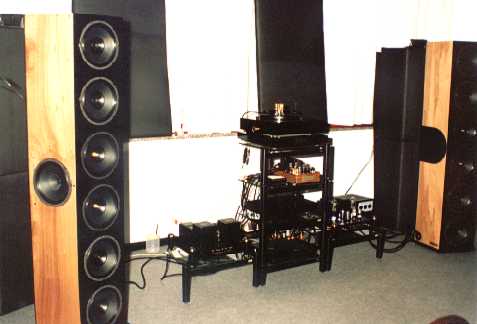 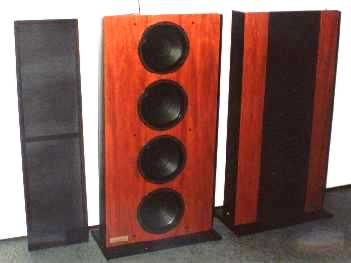 There were also a lot of other non-sounding exhibition areas, used hifi equipment (a few VERY interesting pieces), a lot of new and used vinyl, a lot of magazine stands, and a real lot of people flowing all around these benches. But listing them all would makes things too long and boring.

As you probably know, there was also someone that had on display our TNT-TTS cables... but this is another story (more on this in an upcoming editorial...).

As said the show has been successful. The only major sad note is the constant absence of youngsters. Not that there were so many even in the video areas at Top Audio (the other audio show organized in Milan, normally at the beginning of September). But this, and part of the public, is one of the few common points between the two shows. Top Audio is oriented to the larger operators in the audio(video) market. The Mialno Hi End is typically organized and populated by the smaller ones. To take it to the limit, mass market versus craftsmanship, to some extent. Obviously there are exceptions in both cases.

The small size of these companies, by the way, allows a direct connection not only with the salesman, but also the designer and the production manager (often always the same person), with a far more customized approach. Something not possible in the mass market, and that seems always more requested and demanded by the audio addicts.

The reason, from what I hear, is essentially the cost of high quality equipment. It is probably not a problem for high end, that is the audio equivalent of a Rolls or a Ferrari, and is therefore bought for the same reasons and mechanisms, but the immediately preceding level, where people are still looking for advantages and budget is limited. Now, there is - according to me - a widening gap between what mass market is offering and customer requirements. And in this gap the smaller, craftsman-style producers find their niche.

Where is the perceived advantage? Costs are high, but far lower than the high end market ones, for similar sonic performance levels. The design can be tailored to customer's needs. Customer care gets down to personal direct relationship and to long term involvement. The risk in terms of assistance does not appear really higher (too often famous companies disappeared in the past leaving their customers in troubles). The difficulties in re-selling the used unit are (at least psychologically) more than balanced by the reduced initial cost.

So, there is a niche market that seems able to stay alive.

What anyway according to me makes the difference from the previous editions of Milano HiEnd is the average sound quality.

There were a few rooms not so interesting, and even (very few) rooms frankly disgusting, but in many cases the exhibitors that were present also at the previous editions presented new, mature versions of their products, definitely improved in terms of sound.

Yes, I must admit that the average sound quality was probably better than at the last Milan Top Audio Show.