In this year again, vintage ruled and got a lot of attention at the show. While Silbatone attended the show for the third time in a row, Keith Aschenbrenner from Auditorium 23 also brought a vintage cinema speaker from Siemens Klangfilm to the show.

Then, some new fullrange speakers, current production horns and interesting analog rig could also be seen or heard.

OK, let's start from the beginning.

Silbatone brought a pair of Western Electric 15A cinema speakers, and fired them with G.I.P. drivers. A mono bass was placed in the right corner, playing open baffle with 2 pcs. of EV 30W monster woofers and 2 pcs. Altec 515B. The 15A midranged horn ran without any crossover, so even deep cello notes came directly from the 15A horns. The woofers added just some soundstage noise. I would have liked to hear the system without woofers.

The original 15A horns have been cut into pieces for transportation. Otherwise it would have been impossible to get them through the door.

Thomas Schick and Frank Schroeder, both makers of fine tonearms, and located in Berlin, provided some renovated vintage turntables and equipped them with their respective tonearms. Cartridges were vdH Colibri on the Schick tonearm and a Denon 103 in wood body on the Schroeder LT (linear tracker).

Joe Roberts and Mr.Chang played quite a variety of music: Black Sabath, Led Zeppelin, Kraftwerk, Hindemith, Mussorgsky's Night on Bare Mountain. On youtube I also found a video from the 2012 show, where Joe Roberts danced to Diana Krall. I am glad that I missed Diana Krall, by the way.

The sound of this setup was really big fun. There wasn't any obvious vintage flavour like honky horns, absent bass, dull treble, or limited dispersion. There wasn't any obvious high-end artefact either, that means no pin-point soundstage or overly sharp projection, bleached-out midrange, one-note bass or glassy treble. The sound was bigger than life, but hey, these are cinema speakers, so what else should we expect. Despite playing a 40W push-pull amp into the 15A horns at full volume, the sound was never aggressive, just natural. It was a real joy listening to a recorded full orchestra at realistic life volume.

Together with Silbatone, and G.I.P. the European importer of G.I.P electrodynamic drivers were present. Unfortunately, the G.I.P. stuff is insanely expensive.

I guess that Silbatone is not able to better this next year. 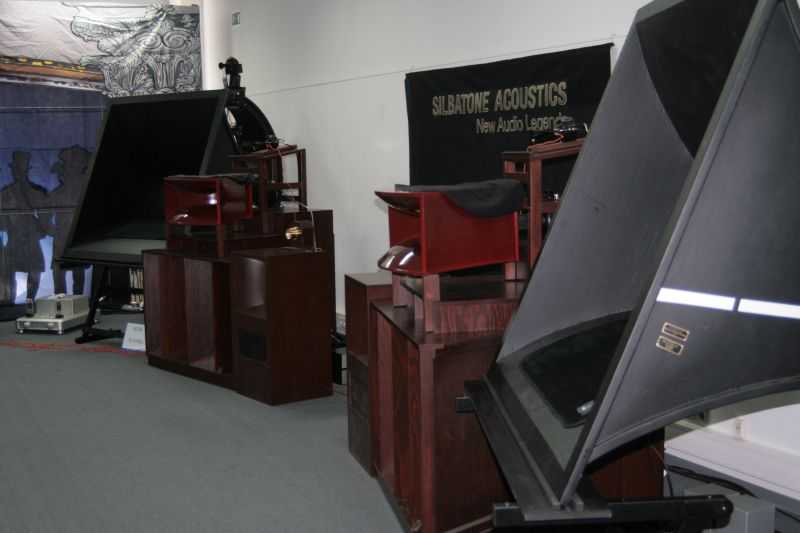 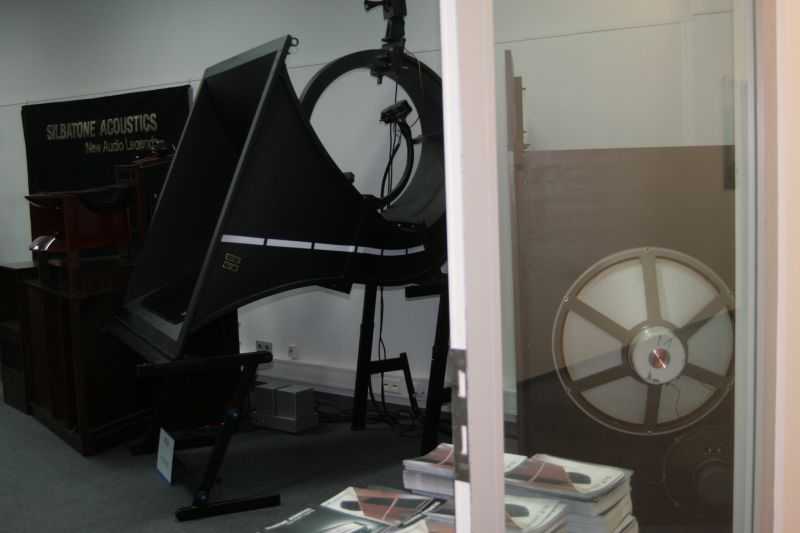 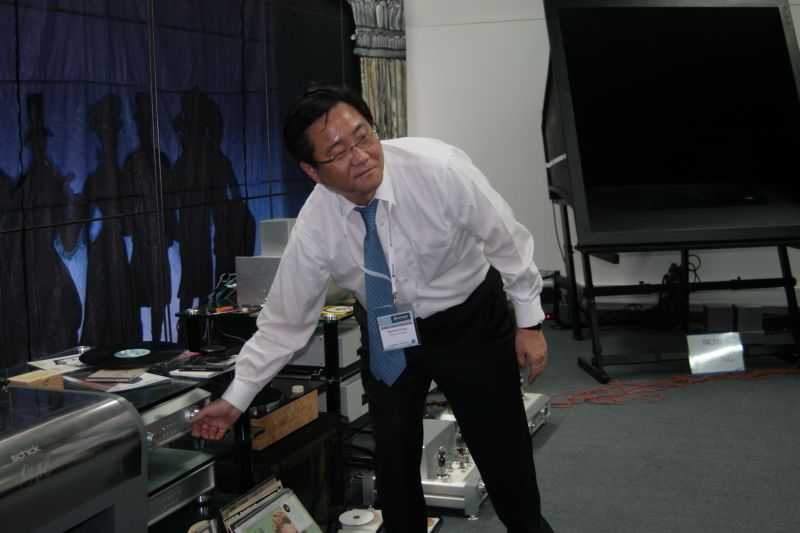 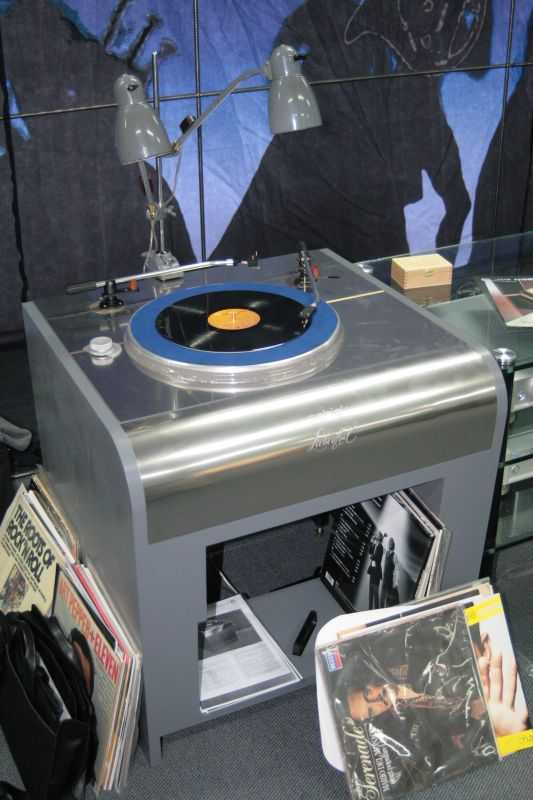 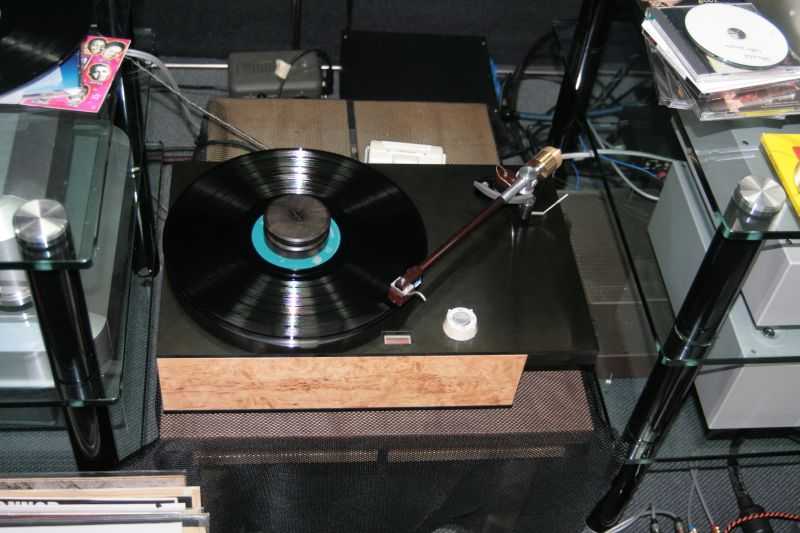 Acoustic Plan has been exhibitor on the High End show for some years now. In the past, Claus Jaeckle showed his own amps with open baffle speakers and played vinyl on his Nouvelle Platine Verdier. This always has been one of the better shows at the Munich High End. This year, he shared room with Keith Aschenbrenner from Auditorium 23. While the turntable remained the same, since last year playing with EMT "banana" 12-inch tonearm and Shindo SPU-A cartridge, the Acoustic Plan amps sometimes have been exchanged with Line Magnetic amps during the show. Keith Aschenbrenner is now European importer of Line Magnetic speakers, while Claus Jaeckle does the same for Line Magnetic amps. Claus Jaeckle also produces a current version of the Magamp designed by Lars Lundahl. Speakers demoed have been vintage Siemens Klangfilm Eurodyn, again a well respected cinema speaker. While these speakers had a definite vintage flavour, they excelled with extraordinarily speech articulation. Funnily, you can get 555 drivers for 15A horns also from Line Magnetics, though at a more friendly price.

At this point I would like to thumps-up these folks for showing the High End community, that there is respectable vintage gear also coming from Germany, not only USA.

There was more to listen at this room, but I missed the demo of electrodynamic fullrange speakers. 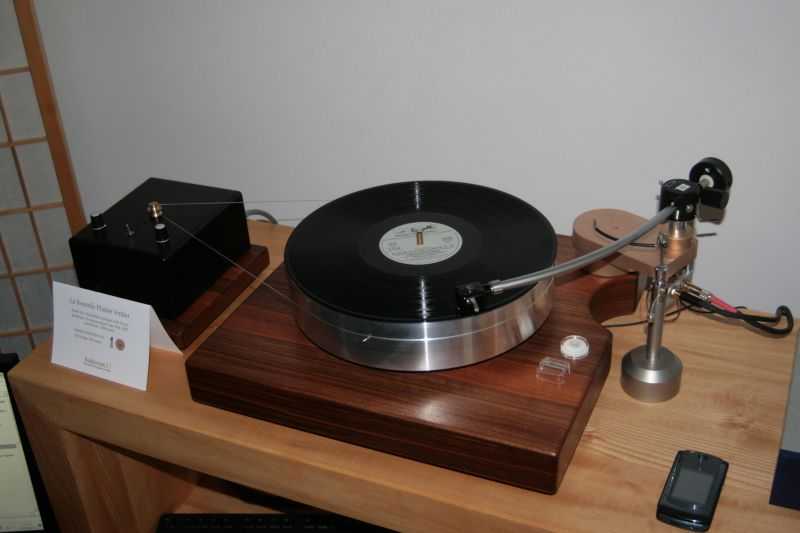 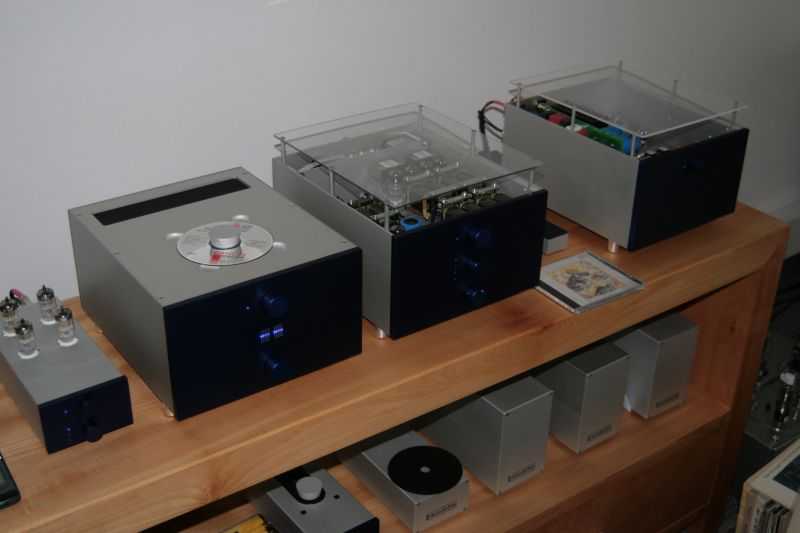 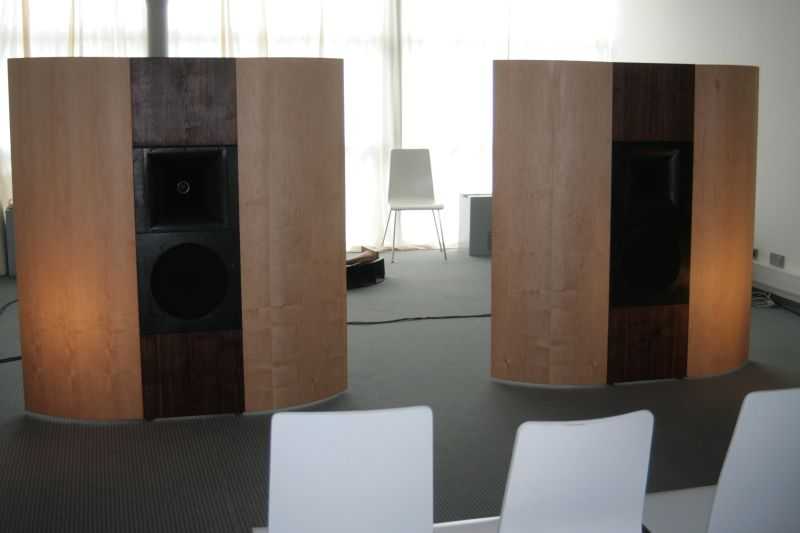 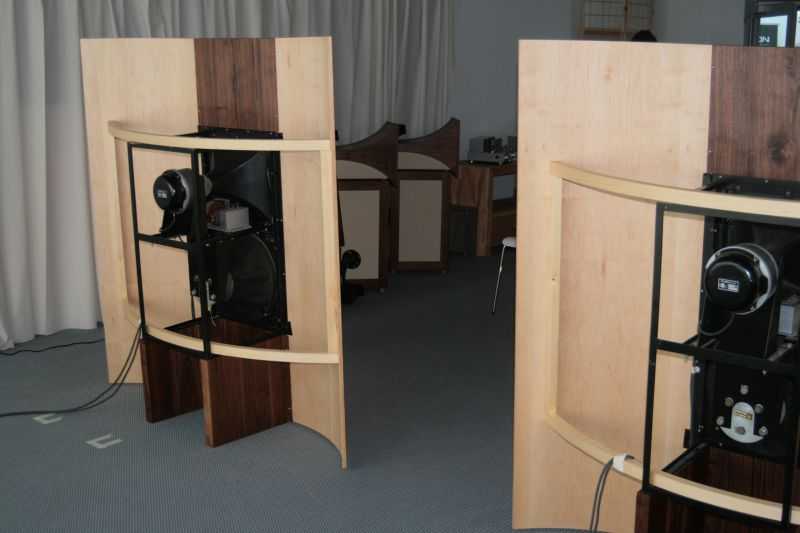 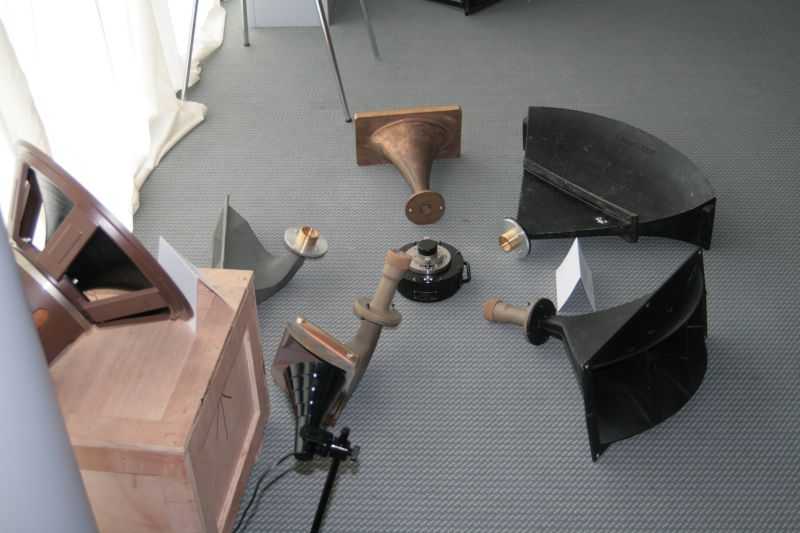 Audio Tech horns from Poland, showed with their 15000 EUR modern horn system, how a modern horn can sound. The product sheet read something like "on popular demand in the DIY forum, we now produce this". Active 15 inch bass, Radian driver with truextent beryllium diaphragm, midrange horn designed after Jean-Michel LeCleac'h. All contemporary joker words are hit in the product sheet.

These horns did not sound like horns, they were smooth like shoe-box sized British monitors. But they did not sound like music, either, because they sounded rather boring. The solution of this conumdrum is, that they used a DQX device to make the horns play in the tiny 20 sq. metre room. DQX devices can be used to tame a speaker, and also to adopt a speaker to a room, but they also can ruin the sound. If you had been in that room, you might have spotted that thing on the right side of the rack, near bottom. 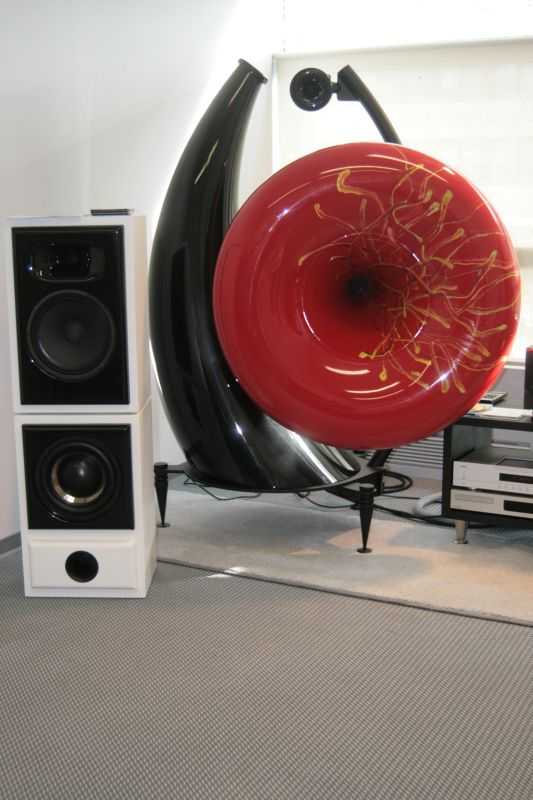 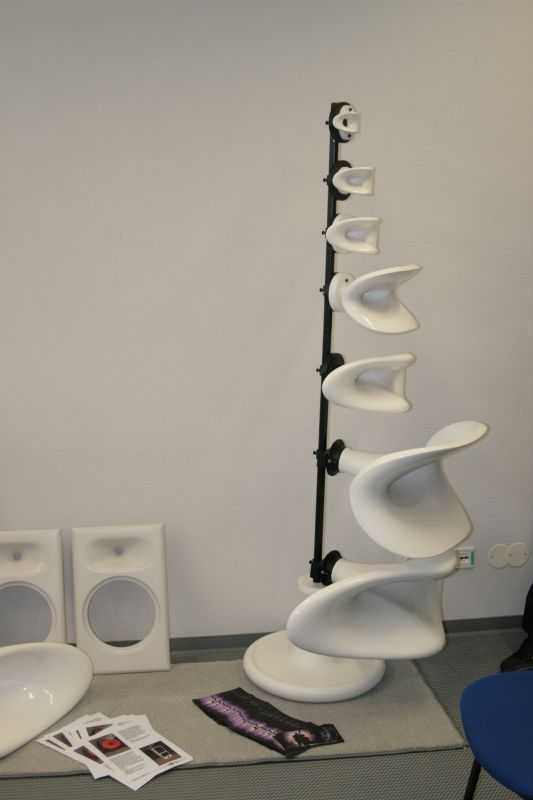 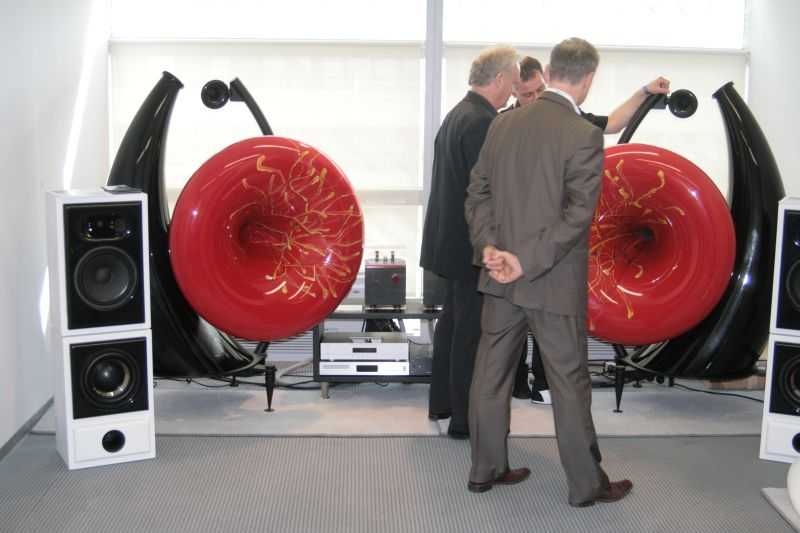