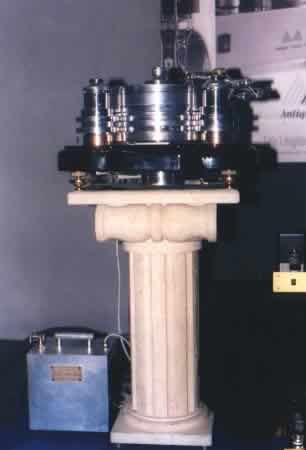 As promised, here is a short reportage from the Rome Audio Show 99. Since the famous Top Audio takes please up North in Milan, the Roma Audio Show is the HiFi event for those audiophiles who live in the South of Italy and don't like to travel much :-)


The main novelty of this 99 edition is the location of the event: the famous (well, in Italy, at least) Hotel Ergife with larger and easier to reach rooms so that most of the HiFi systems sounded acceptable this year.
This has been the key for a definitely successful event, with many visitors roaming from one room to another, seeking for the best sound or the most attractive and singular HiFi system...

Below you'll find some picture taken at the Show, in no particular order (may I say ...disorder?) with some brief comment. Of course it has been impossible to take a camera shot of every room and interesting HiFi component...so, don't complain if you can't find here what you were looking for.
Also, don't complain if your Company doesn't appear into this reportage...we publish exactly what we want, nothing else. You may have more luck the next time :-) 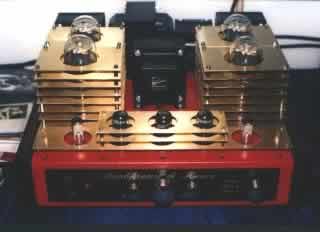 As you may know we try to avoid to write comments about the sound heard into the various rooms and this for many valuable reasons: it is impossible to judge a particular HiFi system not knowing the tonal balance of the room and/or of many "unknown" components of the HiFi chain.
Sometimes a wrong placement and installation may sound good components so badly that you wonder why they insist showing them :-)
In our opinion the HiFi Shows are just that: Shows, nothing else. One goes there to see the latest news on the market, the trends for the future and to chat with collegues, friends, readers and manufacturers about the situation of the HiFi market.
In other words a Show should be the best way to "promote" HiFi and to keep the market alive. 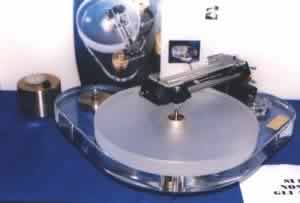 First things first: let me praise the organizers that have made all this possible: Audiotech (a big HiFi dealer in Rome) and the HiFi magazine Suono.
The HiFi scene in Italy is very lively thanks to the high number of manufacturers and HiFi Shows but the market is standing still, during these years.
It seems the younger generations are not so attracted by HiFi and the Love for the Good Sound...TNT-audio is here even to try to attract those who don't buy printed HiFi magazines...so far, it seems we're succeeding! 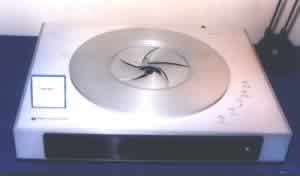 Let me also praise the manufacturers and the distributors that have showed their products at this HiFi event: the success of such a Show is also directly proportional to the number of exhibitors that attend.
Of course, a huge thank you to all the audiophiles who have spent a couple of days roaming around, listening and chatting about HiFi into the rooms of the Rome Audio Show. It means the Good Sound still amazes many people!

Your favourite HiFi review, namely TNT-Audio :-), was there on Saturday and we are particularly happy because of all the support we received from you readers (thanks guys, we love you too) and...even from manufacturers and distributors! Many of them swear to read TNT-Audio on a regular basis!
Some of them showed no interest at all (Internet? What's that? May we eat it?) but, after they asked for comments about us to friends and collegues, they applauded our courage and showed to appreciate our unbiased and non-commercial attitude! So much that they suddenly decided to send us their components for reviewing on TNT-Audio (so expect more reviews in the next months).

So here follows a brief summary of the things that have attracted my attention, either because brand new or particularly "strange", weird or interesting. This is not a playlist nor a top ten...I hope I've made this clear enough, if not, read few lines above. 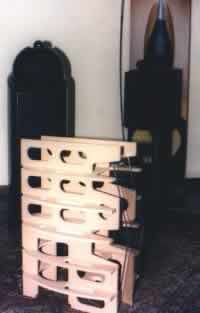 Audiogamma, a big HiFi distributor in Italy, showed some breaking news such as the new TAG-McLaren series, the new Jadis Orchestra Reference and the whole catalogue of Rotel and Primaire.
The british B&W Nautilus series was there, too and it was possible to admire the inner structure of the new B&W loudspeakers, the famous Matrix (take a look at a picture below). Also available a mid-high section of a Nautilus.

Outrageously expensive and gorgeous was the space-shuttle-like CD transport from Sonic Frontiers which I have been able to "capture" while the fancy drawer was opening...

The Italian firm RHF, known for its hybrid loudspeakers, was also showing some interesting mos-fet amps. Certainly something I'd like to listen to at home into my main system.

Stereo Arte was showing the recently imported French-made components known as Cairn: CD players, amps, preamps and integrateds, available both in black and silver (silver is back?).
In a picture below you will find the impressive 5-channels Home Theater amplifier with 5 separated toroidal transformers!
Jean Marie Reynaud from France makes some pretty interesting transmission line loudspeakers, still distributed by Stereo Arte as well as the affordable Danish speakers Eltax. 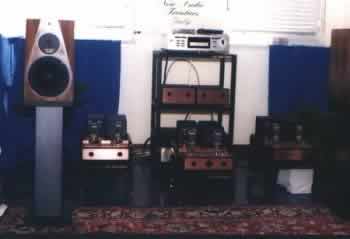 The young but already respectable New Audio Frontiers from Italy was showing its shiny line of tube amplifiers together with two new loudspeakers: the Reference One (a floorstander) and the Reference Two (a freestander). 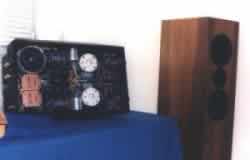 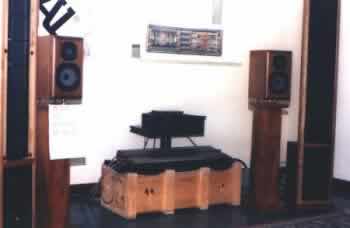 SAP (see their interview on TNT-Audio) was showing the Anniversary series, already descripted into that interview, in particular the impressive and revolutionary Anniversary loudspeaker.
Together with Simetel, showing some cool Nightingale tube electronics, it was possible to admire the new high-end tube production from Nagra (do you remember the hi-end pro reel recorders?). 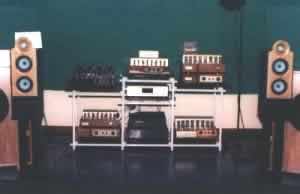 Into the Sound & Music room (another big name in the Italian distribution) it was possible to listen to Vandersteen loudspeakers driven by budget-conscious Jolida tube amps.
Particularly attracting was the new shiny integrated named 810A. 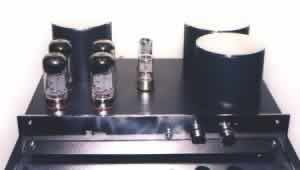 Suprem, the HiFi firm directly linked to one of the organizers of the Show, the Audiotech store, brought the Stealth, an interesting cleverly-priced tube integrated amp now available in different finishes, which was driving a pair of elegant bookshelf loudspeakers named Suprem Futura Limited.

Recoton was offering to our ears the Magnat loudspeakers, which seem to have a very interesting quality/price ratio, and the new Electrocompaniet electronics, with the new EMC1 CD player as a star of the room. 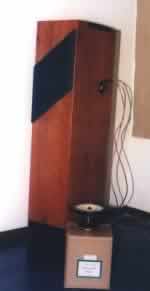 What's new from the Lowther club? A large loudspeaker which makes use of two units, one placed directly on top of the cabinet. Weird.

Have you seen the first picture of this reportage? It shows you a gigantic shiny turntable from V.Y.G.E.R., a new Italian firm which specializes in super-hi-end fully-air-suspended turntables.
After the expensive Atlantis seen at the last Top Audio now VYGER is making a more affordable (5,000 US $) model called Indian, still fully air-suspended (bearing, platter, arm...). This turntable caught the attention of many audiophiles at the Show. It was reproducing some nice Music through Antique Sound Lab tube amps. 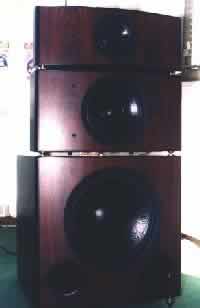 Meridian, Proton & Quad electronics were available into the Audio 4 listening room where a pair of amazing new Kef 109 The Maidstone was attracting everyone's attention.
This is a hi-end 4-ways loudspeaker with an impressive 40 cm woofer (see picture), which makes use of the famous proprietary Uni-Q technology from Kef.

As usual, into the Marantz Italia room, Marantz electronics were driving a pair of smallish Tannoy loudspeakers while not far, into the Dromos room (yes, Virginia, another loudspeaker manufactuer from Italy!), a pair of Caanto bookshelf loudspeakers were playing some good Music.

Still loudspeakers from Italy, quite different from the rest: these are the Ultrasound, crossover-less loudspeakers (soon on TNT-Audio, an Italian listening test already available into our Italian section). Ultrasound makes revolutionary and fascinating amplifiers, too. 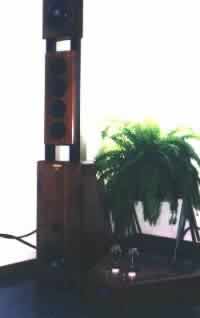 As usual, classy and hi-tech was the MBL room (see the last reportage from the Top Audio in Milan) with the already well-known watermelon shaped drivers. Revolutionary, strange and...expensive. 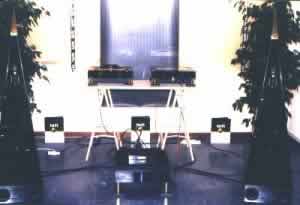 And now for some press: theere were: Audiophile Sound (again!), exposed by Audion (no, not the British Audion) and all the other Italian HiFi magazines with their stands. Just one of them, Fedeltà del Suono, was showing its DIY kits into a room.


Finally I can't avoid to mention the Home Theater section, with earth-shaking bass and legions of audiophiles (?) waiting to experience the Cinema in Casa (Italian for Home Theater, sounds pretty good, eh?). 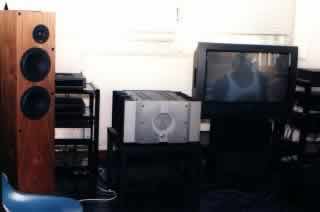 The Main problem of this kind of HT systems is that with their very high listening level, they tend to disturb the quieter HiFi rooms near them, another reason to avoid any comment on the sound of the HiFi systems heard at a Show...

Outside the Show it was possible to listen to some car-audio installations too...

Further comments? I'd like to meet more serious audiophiles, guys who shut up and listen while are seated into the listening room and wait to chat when they go outside.
From that apart the Rome Audio Show 99 has been an undeniable success, many people attended and many interesting products were available...see you there next year!

How to PRINT this article