Dire Floyd and Pink Straits in concert, with some annoying noises in between

The 16th edition of the Rome Hi-Fidelity Show took place, in Rome (yeah, that was easy to guess), on last November 24 and 25. This event has slowly become a mid-sized show, with 40 rooms, 80 brands and more than 4,000 visitors. The organization, curated by The Sound of the Valve, a.k.a Stefano Zaini, decided to choose the Mercure West, a four stars hotel quite far from the center of the city, not exactly easy to reach. Stefano has been organizing HiFi Shows in Italy for two decades already, hence eveything was well organised, though the hotel wasn't exactly up to the task: narrow corridors and hallways created heavy “traffic” from time to time. And the rooms at the -1st floor were extremely bad sounding, being mostly empty of furniture. It is nearly impossible to make an empty room sound reasonable, no matter how expensive the HiFi system you decide to install into it.

Actually, these rooms have on display some of the most expensive set-ups in the Show and most of them were simply an unbearable listen. Embarassing. There were hundreds of thousands of euros of HiFi gear that couldn't express their full potential. Not even a fraction of it.

Now, what's the deal with displaying extremely expensive gear that sounds badly? Novices, if we really want to attract them, are not interested in such expensive gear, unless it sounds like nothing they've heard before. And that was not the case. Wouldn't it be better to display down-to-Earth systems in order to give newbies the idea there exists something they can afford? The difference between an expensive system and a budget system, in a wrong room, is negligible. Sometimes a budget system can even sound better...

While visiting the -1st floor I've had the possibility to listen to some speakers that I know pretty well, for example the Duevel Bellaluna Diamante I reviewed some time ago. It was hard, for me, to compare what I heard at home with the sound the speakers were delivering at the show. Hence, I might understand if a reader of that review, which was highly positive, accuses me of being a deluded visionary, after having listened to these speakers at the Show. “Is this reviewer completely deaf?” or “Has he been paid to write such a wonderful review?”. And he would be damn right. I could go on listing similar examples of excellent components I know well that sounded the 0.01% of what they are normally capable of acheiving. This way, I'm afraid, newbies could suspect high-end is simply a “game” for wealthy, but completely deaf middle-aged men.

Things were slightly better upstairs, where rooms were smaller and sounded better. I won't list all the rooms I visited, just the very few that, for some reason, impressed me in one way or another. 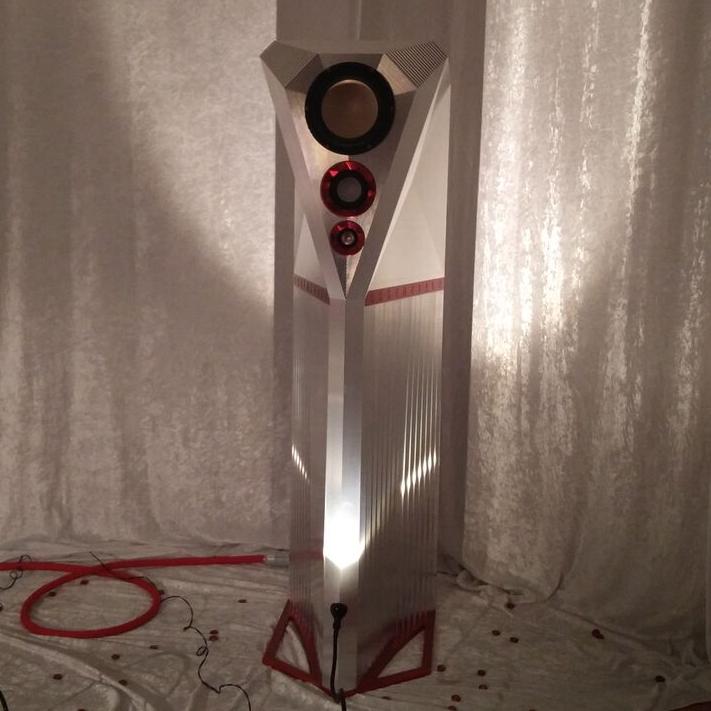 Quite interesting, I'd say, was the room where Omega Audio Concepts displayed their aluminium-crafted gear. The room had a bizarre look, as you can guess from the pic. On display the “Essenziale”, a sort of “all in one” component, with built-in music-server and amplifier, into the same bizarre cabinet. Priced at 10,000€, it wasn't affordable, to say the least. And you need 17,000€ to purchase these sexy aluminium loudspeakers, which were connected to the Essenziale via fancy red cables, also made by Omega Audio Concepts. The sound was impressive, as was the look of the room. Precise, solid, fast, undistorted, weighty and punchy, but not aggressive. There was potential, and I'm pretty sure these components would sound much better in a reasonable room (it was too small). Unfortunately they are huge and heavy (especially the speakers) so shipping is a costly option and handling could be a nightmare. I'd love to have this stuff in my listening room, in order to evaluate its full potential. 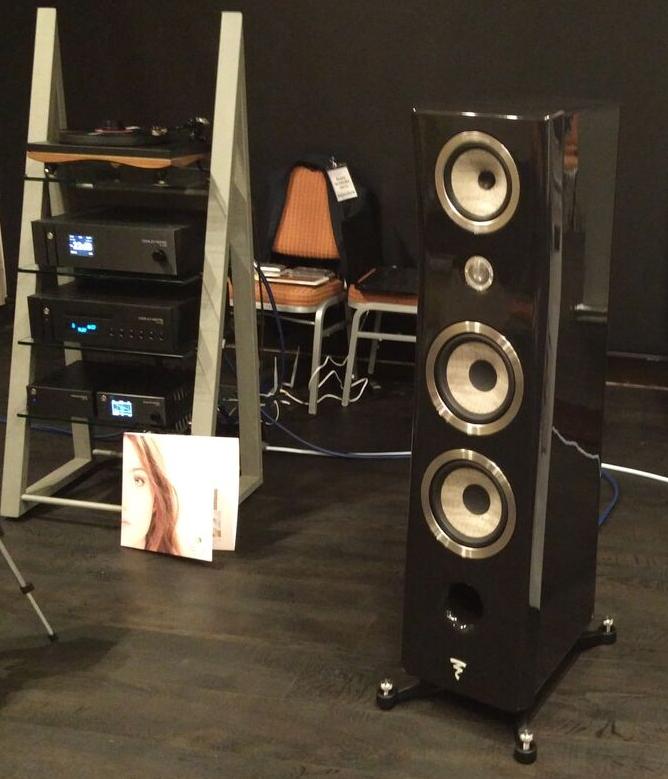 A very high potential was also expressed by the system in the Tecnofuturo room, where a pair of new Focal Kanta N. 3 loudspeakers (c. 10,000€/pair) gave their voice to a full GoldNote set up. The sound appeared to be tonally correct, with plenty of precision and realism. Thumbs up! 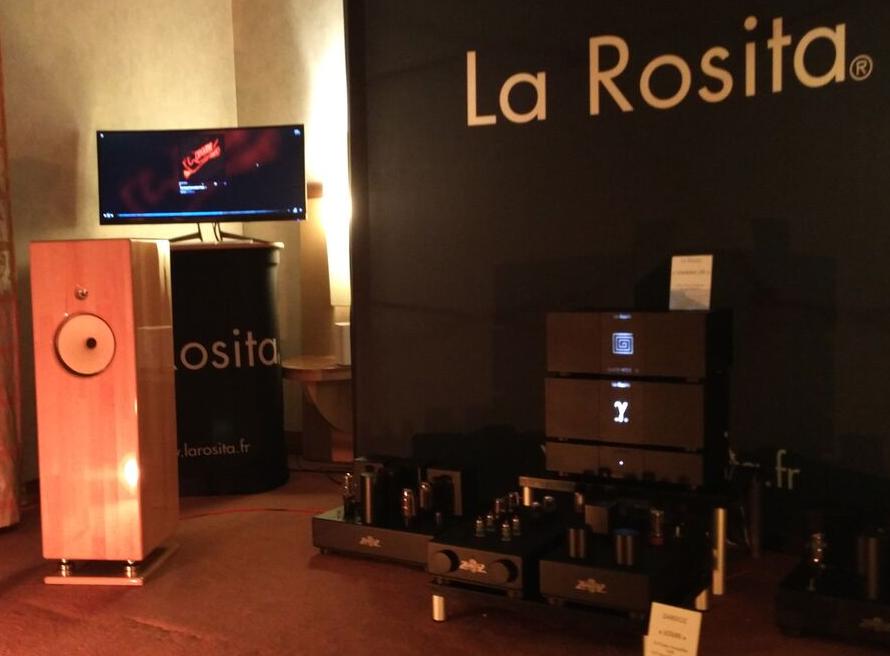 Another expensive and good sounding set-up which was delivering good tunes could be found into the La Rosita room, a French brand with a rather unconventional approach to HiFi design. The high sensitivity (93 dB) La Montespan loudspeakers made use of a full-range driver with Alnico magnet, paired with a supertweeter. These speakers were powered by tube-based amps from Zardoz. The sound was correct, full, lively and highly dynamic. 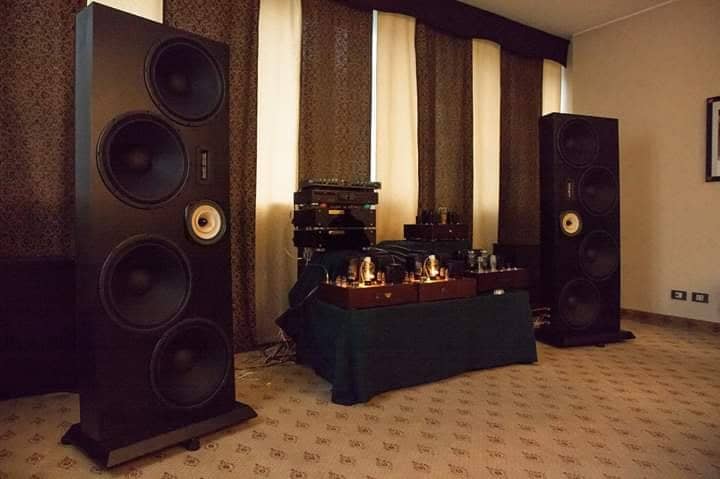 The Sound of the Valve stuff

This was the room of the organizer of the Show, Mr. Stefano Zaini. The sound was full-bodied, with more substance and less artificial audiophile precision. The Quasar speakers were, as usual for The Sound of the Valve, huge, with an array of many drivers in dipole configuration: alnico Lowther PM2 full-range units and ribbon supertweeters, all for just 19,000€ (!!!). The system consisted of The Sound of the Valve preamp and amps in full active tri-amplification: 20 watt/channel 808 Magnificient power amps powered the mid range (19,000€), while two solid-state amps for the bass and the supertweeters. A Notorius Reference preamp (11,000€) received the signal from the inexpensive Ah! Njoe Tjoeb 4000 CD player (900€), which we reviewed several years ago here at TNT-Audio. Again, a rather expensive set-up.

Other rooms haven't impressed me much, but it was very difficult to perform a reasonable evaluation, because the rooms were too crowded, noisy or because the music played was simply too boring to my ears.

Brands. Generally, and more than other times, I've had the feeling there are more HiFi Companies than audiophiles out there. Seriously, despite I've been following the HiFi market for decades, it is difficult for me to understand what's happening. Simply put, there doesn't exist a market than can justify such a huge offer of brands and components. New brands pop up every other day, and generally these new components are extremely expensive. The hope is, I suspect, to sell few components per year, at stellar prices. This way it is easier to generate a reasonable income without the hassles of building a wide distribution and service network. Many of these new brands won't leave a trace in the history of HiFi, I'm afraid. Don't buy with confidence, I'd say.

Rooms and visitors. The rooms - except those at the -1 floor - were quite reasonable, but audiophiles are a wild bunch: cell phones ringing while auditioning a system, and even someone who talked loudly at the phone while sitting in the first row of chairs. Can't you simply switch off the phone for a couple of hours? Average age of the visitors was very high, which is normal if you take into account the extremely high price tag of the majority of the displayed components. If we wish to attract new generations of customers, those prices have to be lower.

Music. Music selections were the usual mix of boring light jazz, Dire Floyd and Pink Straits ;-), with rare moments devoted to classical music and choirs (always hard to reproduce correctly). Some room courageously played heavy metal and electronic music. I hope this is the birth of a new trend because...enough is enough. Moreover, considering CD players are disappearing from the HiFi shows, it is hard to bring some CD and ask to play some of your favourite tracks. USB drives could only partially solve the problem. As a result, visitors are forced to tolerate what the exhibitors have decided to play. And sometimes it's hard :-)

An old adage says “When in Rome, do as the Romans do”. I tried, actually. But it didn't work. After all, if you don't like the Show, you can enjoy the beauty of the city! More seriously, in my opinion, the organizer should look for a better venue (the hotel, I mean) to make this show easier to reach and, hopefully, with better sounding rooms.